Need for Speed: Most Wanted trades in-game rivals for a more human opponent

Share All sharing options for: Need for Speed: Most Wanted trades in-game rivals for a more human opponent

It may have the same name as the 2005 Need for Speed title, but it's certainly not the same game. This time it's all about the competition; and Criterion doesn't mean with AI.

Criterion, a company of car lovers, already had licensing deals with a number of car manufacturers. The developer was eager to show they could do more with those licenses than another Burnout game. Young said the company's relationship with these manufacturers is "great," and they have been very cooperative with helping Criterion create realistic cars for players to drive.

"We recorded all the cars, audio and video, and we got the cab data from [the companies]," Young explained. "The car modeling isn't just us designing a car, we actually got the engineering data from manufacturers. What you're doing in the game is realistic in a sense, even though it's not a realistic story.

"The things we did to [these cars] were things car manufacturers weren't really happy with," Young continued. "We thought there was an opportunity to do a licensed car game for Need for Speed and we asked, and they said yes, and that was cool."

"It's a very different beast than the other game."

Criterion chose to make crash physics as realistic as possible, using a "rigid body/soft body" system for determining how badly cars get beat up.

"We've got a very good physics system," Young said. "The only restriction we have is since it's a licensed game, we can't damage the car's safety cell. You can't crush the roof flat or burn out the car. Some of the things in Burnout we weren't able to do with Need for Speed. We can only damage them to a logical extent."

So why reuse the Most Wanted name if it's not a remake or a reboot?

"Because we love the premise," Young answered. "It's a very different beast than the other game. Obviously that may be a little confusing to some people, but we thought the premise was strong enough to take this approach."

Young described Criterion's method of creating a game as something more free-form, saying "design documents" are dirty words among the development team.

"Criterion does a lot of experimenting," he said. "We don't come up with game design documents and just execute them; that's not how we work. It's more of a function of having a bunch of ideas we think are interesting. We'll try them out, some work, some don't. And we really try and find where the fun is, really. In this particular game we knew that the structure of racing your friends would work."

The ability to find all the cars available in-game from the beginning through regular play was a function of the team at Criterion's joy riding. The team would play the build and adapt gameplay based on their experiences.

"We tasted our own food, so to say, and worked out what's the most fun from what we had rather than have some paper concept of what is it and just execute it blindly," Young said. 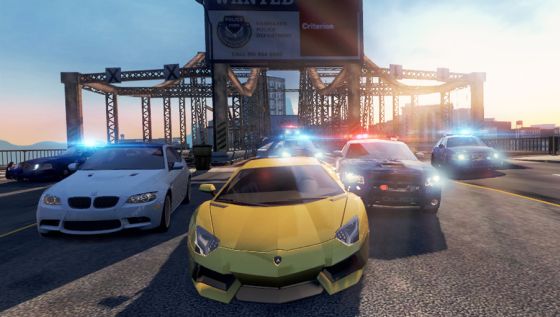 "I think whatever Criterion does, we always pick it on the basis that we want to do something new with it; we never really want to make the same game," he added. "And in the history of the games that we've made I feel I can quite honestly say that each game has been significantly different. The nice thing is, if you have a great spread of people arguing on the internet about which one is the best one, it means you have a good product."

Criterion is planning to release regular downloadable content packs for Most Wanted, including new missions, challenges, and cars. The very first pack, due soon out after the game's release, will include new cars and events.

"Arcade racing games have often been seen as quite shallow," he added. "I think in the past people have rightly handled them different. The one thing that will surprise people about this game won't occur in the first five minutes. We built real depth into this game. going to be a lot of content people will be surprised about. It's not just that day one reaction, but seeing that reaction on day 10, 20, 30... It'll be interesting to see how people react to it.

"People have come up to me and said, ‘I played Burnout Paradise for 400 hours.' That's amazing. We never intended the game to be that big in terms of hours played. We've tried to make sure this game is not too big, as there's always a danger of diluting. But I think there's going to be a lot of time to spend in this game."

All the seasonal challenges coming to Destiny 2: Season of the Haunted