Review and information for SSX (2012)

As human beings, we're inclined to obsess over transitions.

The big moments — like graduations, weddings, birthdays — connect our nostalgia of the past to our excitement for the future. And SSX is a transitional game. A reboot of a beloved franchise, SSX must show respect to its source material, while carving a new path. It's worth obsessing over.

SSX serves as proper homage. EA Canada has brushed up the original pop rock soundtrack, neon art design, and roster of Mountain Dew-swilling snowboarders with a degree of care and reverence reserved for classical art restoration. For that reason, 20- and 30-somethings who, without a hint of irony, refer to the aughts as the "good old days," will adore the new SSX.

There is mercifully more to SSX than its rave culture aesthetic though. Its design subtly and subversively embraces social and casual gaming unlike any other AAA title yet, coddling newcomers, while connecting every racer through a social network-like structure called RiderNet that promotes both synchronous and asynchronous multiplayer. If people are still playing SSX months or years from now, this social slant will be why. 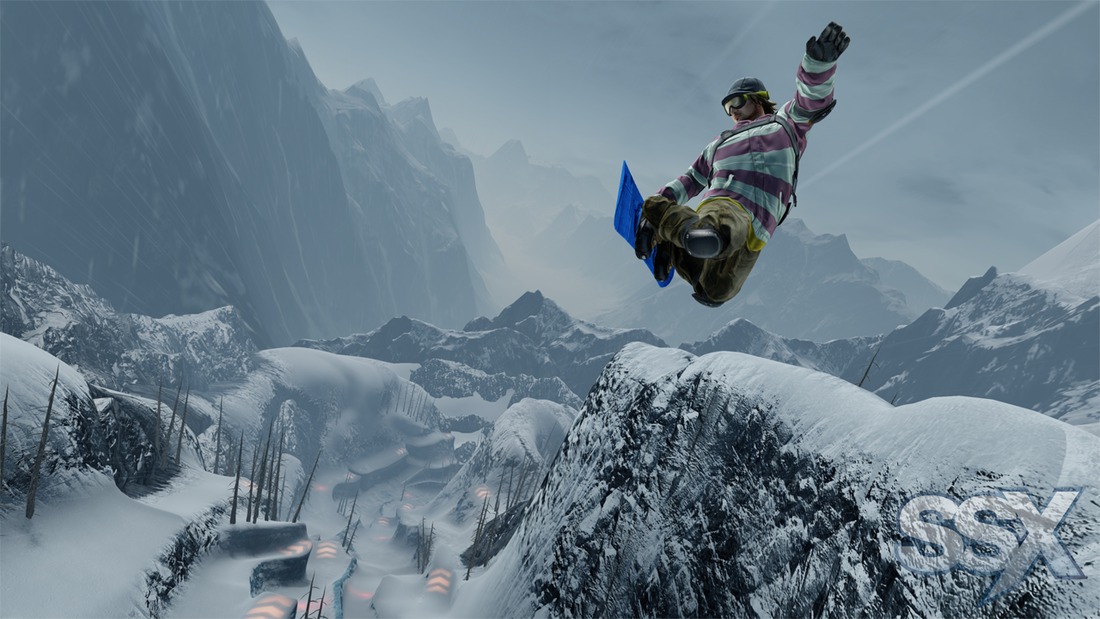 World Tour, the campaign-by-way-of-seven-hour tutorial, introduces nine mountain ranges from across the world, containing unique events like race to the bottom, land the most tricks, or just reach the end safely. Each mountain range also has its own hazard: freezing temperatures, wide trees, ice, and avalanches.

The high-speed tears down the mountains of SSX are intimidating. Assuming they devoted days to practice, a human could just as well call out a line of complex maneuvers down the slopes like a Babe Ruth on ice. SSX allows for that level of precision, and rewards it with high scores.

Or, you could simply hammer the controller with the grace of a silverback gorilla. For the less experienced, SSX follows their lead, translating graceless button mashing into a series of beautifully fluid flips, spins, grabs and feats of aerial gymnastics.

Landing — the most difficult part of extreme snowboarding, especially when doing so off cliffs taller than most skyscrapers — is easy. Stop pressing buttons, and SSX's skewed understanding of gravity centers the snowboarder for a safe transition from air to ground.

It never feels like cheating, and the better players will always best the worst. But that's trivial. The joy is in feeling like the world's best snowboarder. Give SSX the chance, and it will conjure that magic.

Surviving hazards adds the layer of difficulty SSX needs. Early hazards are fun and interesting, requiring snowboarders to change the way they attack an event, like finding well-lit paths or discovering shortcuts with the wingsuit. Later difficult hazards, (like Africa's unfortunately dubbed Darkness "hazard" — an oversight, I hope) transform the slopes into tests of muscle memory. Fatal holes and icy walls appear moments before impact. It's funny the first time, infuriating the fifth, and rewarding the twentieth or so, when it's been beaten for good. 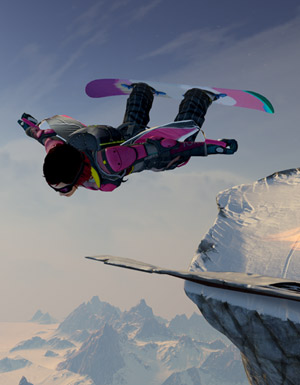 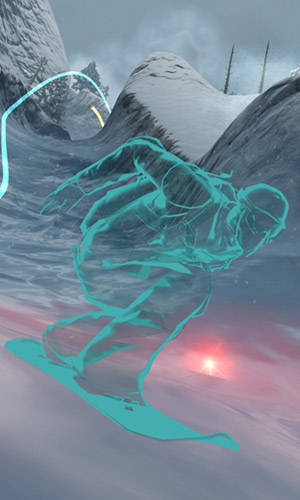 A rewind button, which reverses the boarder's progress by a few seconds, is available. However, your run time isn't dialed backward or paused while rewinding — it so impedes you from accumulating a high score or winning a race, that it is often better to hit restart.

SSX can accept some failures though. Finish but fail to win three times, and SSX allows the event to be skipped. The option to skip a grueling race — casual, emasculating, whatever silly label the most hardcore will want to call it — shows respect for the time each player is able to commit. It cushions SSX's difficulty curve, which, like its mountains goes from flat, to steep, to nearly vertical.

More forgivingly, multiplayer operates on the player's schedule. RiderNet cribs from fellow EA racer Need for Speed: Hot Pursuit, providing "ghosts" of your friends' best runs. If they're online, SSX will drop you alongside your buddies on a mountain. No lobby. No waiting. Events just begin and other riders (as many as 500 of them) join in. It is a blast, not unlike being on a real mountain. Friends and strangers alike zip past, chasing their own goals.

Explore Mode has you compete against your friends' high scores in 150 events. Each victory effectively creates a new challenge for others. The best runs are turned into Ghosts, visual representations of the winning run that can be raced and learned from. Snowboarders may also drop Geotags, SSX's in-game collectibles. The longer scores remain unsurpassed and Geotags go uncollected, the more points the player accrues.

It's a goofy mechanic, seeing these Christmas ornament-looking balls all over the mountain, but it manages to get competitive — finding the most out-of-the-way places to hide them. RiderNet's algorithm directs snowboarders to the Explore Mode runs they're mostly likely to beat, creating and nurturing rivalries between friends. Somehow, hours are lost chasing one score after the other. They always seem to be just barely out of reach, making a hard-earned win all the more rewarding, and the next challenge that more tempting.

SSX does an inspired job reimagining the past. And though the undoubtedly wacky characters and wub wub music will get old in time, months, maybe years from now, I will still want to be just a little bit better than everyone else on my friends list. In that way, SSX is nearly future-proof — and nearly perfect. 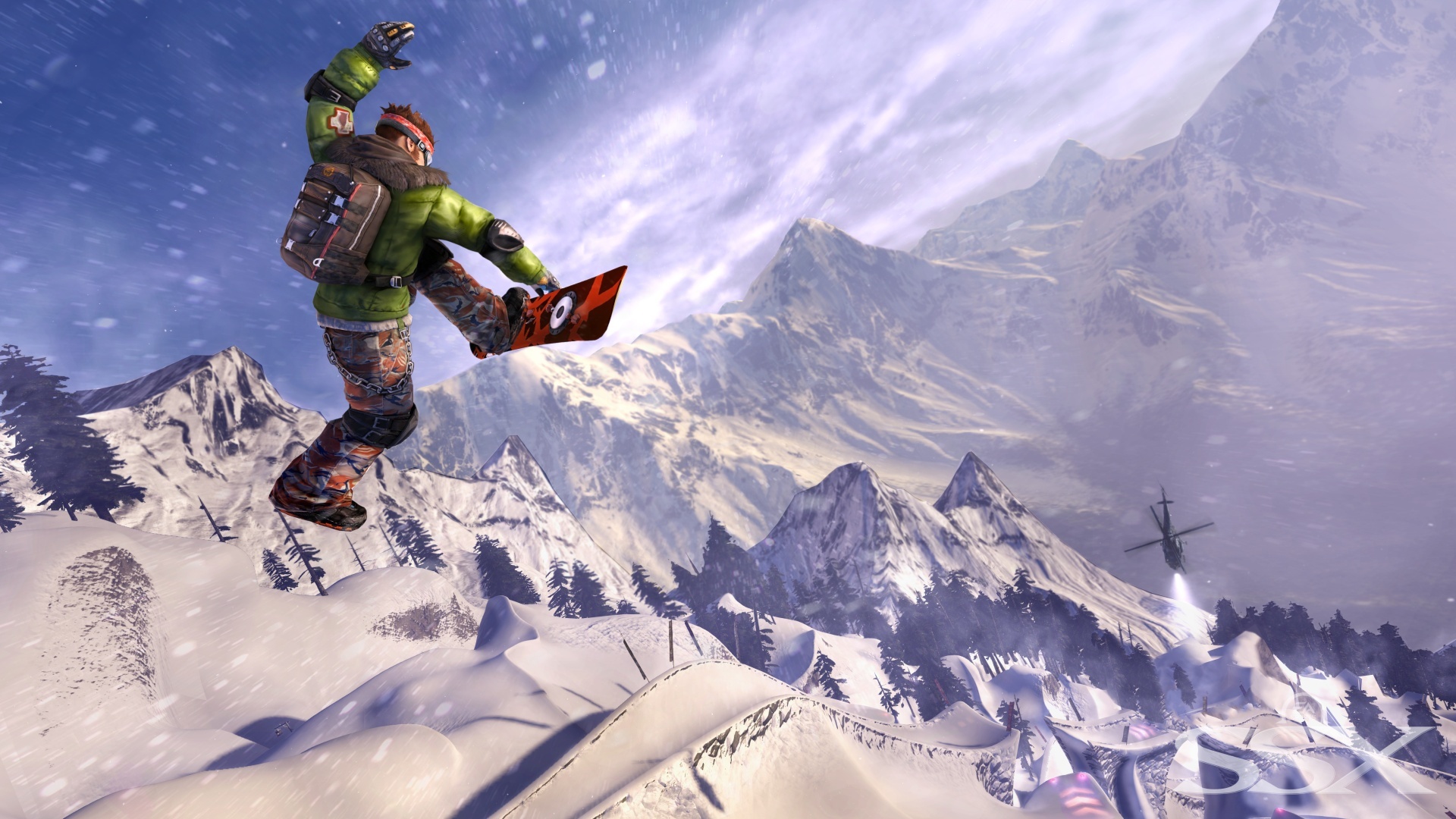