Cloning Case Files is a three-part series examining the personal impact of game cloning in the iOS App Store. Each entry details the experience of an independent developer who suffered in some way from game cloning and how they worked to overcome the effects of cloning. This is part two. Here is part one and here is part three. - Ed.

"I don't know if you've ever experienced a break-in before," says Rodain Joubert. "Basically there's always two aspects to it."

"One, there's the loss of the material property. Which one can feel bad about. But the far greater impact is the simple idea of the violation. The lack of safety. The fact that what you call your own personal space or creative space - somebody decided that wasn't your own, it was theirs."

"THE FAR GREATER IMPACT IS THE SIMPLE IDEA OF THE VIOLATION. THE LACK OF SAFETY."

Rodain Joubert, an independent developer, has been playing a game called Dungeon Crawl: Stone Soup, a punishingly-difficult RPG, for hours on end. It's a huge time sink.

"I was on a holiday and threw all of my time into it," he says. "But as I got to a busy point again, I realized I couldn't dedicate large sections of time to it."

His solution is simple: Make a Dungeon Crawl-style RPG where winning takes just 10 minutes. Desktop Dungeons is born. Over time, it morphs into a strategic puzzle game where careful planning leads to almost-guaranteed success. 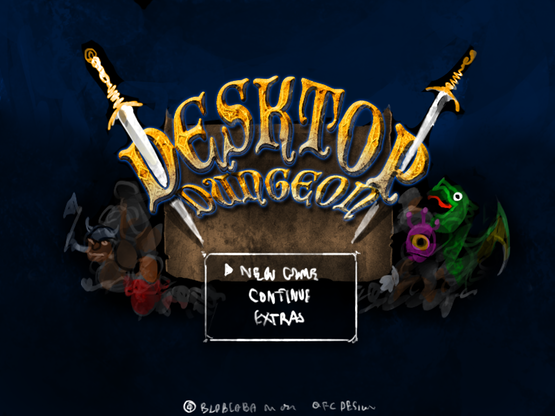 "It was inspired by RPGs and thematically it has some of this high fantasy RPG elements," says Joubert. "But as more and more people contend that it's a puzzle game, I've been inclined to agree with them."

As he's coming up with the idea for Desktop Dungeons, Joubert is also involved in an independent gaming community based out of his home country of South Africa. Known as the NAG Forums (short for New Age Gaming), the community has become a hub for the majority of the country's independent game developers. Designers would often post their games on the forums, looking for feedback. Cheap focus testing, basically.

It's through the NAG forums, that Joubert meets Danny Day and Marc Luck. The pair had already formed a game company called QCF Design and had been impressed with Joubert's previous work.

Day and Luck want nothing more than to find a project all three could work on, and after Joubert posts the first version of Desktop Dungeons on the forums, the ideal project is obvious.

"All the forum regulars were just playing the crap out of the game and not making their own," says Day. "Marc and I had just finished a big contract at QCF and we said, ‘Well, we've got some downtime now, do you want to turn this into something bigger?'"

"IN THE GAMEPLAY VIDEO, HE EVEN SAID, 'FOR THOSE OF YOU WHO ENJOY DESKTOP DUNGEONS.'" 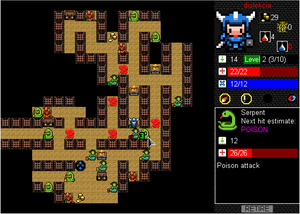 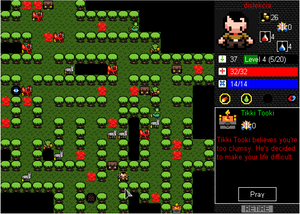 Desktop Dungeons becomes a QCF Design game. Despite the bigger team, the development process remains the same. The team continues to release new versions of Desktop Dungeons to the forums, looking for feedback on every update.

As the game evolves, word spreads outside of the NAG Forums.

"It got picked up on IndieGames.com, because they were watching Rodain's posts on that same forum," says Day. "That's when it exploded. One or two versions in, the game was already that much fun to play."

That's also when the problem started.

Eric Ferraro is a big fan of of Desktop Dungeons. At one point he calls it "one of the best indie games of 2010." He plays the PC alpha version (which QCF continues to release and update, for free, on the forums), but there is one big thing that he feels is missing: He wants the game on his phone. Instead of reaching out to the team to see whether that was something they were working on, he goes ahead and does it himself. He calls it League of Epic Heroes.

Before League of Epic Heroes launches, QCF learns about the clone.

Day takes to Twitter, exclaiming his dismay over the cloning. Eric Ferraro decides to reach out to QCF via email to help clear the air.

"It was this first email to us which told us we could actually have a case in court," says Day. "In that first email he said that he was only copying up to such-and-such release of the game."

But the team isn't interested in getting litigious right off the bat.

"We wanted to make sure we were rational people about it," says Day. "We didn't want to say, 'Hey, that guy lives in San Francisco, let's go throw him off a bridge.' Which, for a while, you feel like you want to do. Because it's this emotional thing."

Instead, the team takes a softer approach. Day explains how they offer Ferraro game design ideas which would better differentiate the two products.

"PEOPLE WHO COMPLAIN THAT THEIR GAMES HAVE BEEN CLONED DON'T HAVE MUCH LEGAL RECOURSE."

"We were like, ‘Oh, that's cool. We like that you're making the game, but we're kind of annoyed that it's so close to Desktop Dungeons. So what if you do this? How about this idea? What if you had random combat instead of the determined combat of Desktop Dungeons?'"

The response they get back is a great deal less generous. Ferraro is keeping the game the way it is, saying that there is no legal ground for QCF Design to stop him. And, unfortunately, he might be right.

According to Jas Purewal, a London-based lawer who runs a blog called Gamer/Law, QCF would have a tough time proving copyright infringement.

"People who complain that their games have been cloned don't have much legal recourse," he says. Copyright can protect artwork in a game, or the specific code behind a game, but game mechanics themselves cannot be protected. 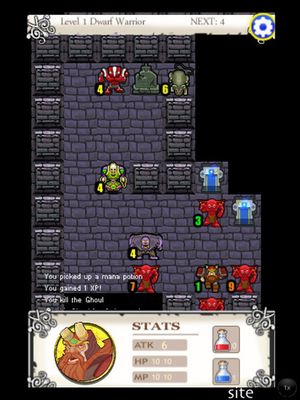 Even though the law might have difficulty backing them, QCF is still interested in shutting Ferraro's project down. They inform him that a lawyer would be hired and Apple would be contacted about the cloning.

Two days later, another email arrives from Ferraro. This time he is offering to purchase QCF a 4th generation iPod Touch (or the USD equivalent transfer via PayPal of $230) if it meant they would cease legal action. In short, a payout. QCF doesn't respond.

11 months after Rodain Joubert comes up with the idea for Desktop Dungeons, it has its first clone. League of Epic Heroes is released on the iOS App Store for $1.99 and, for all intents and purposes, it's Desktop Dungeons. The art is redrawn and the code is rebuilt from scratch, but all of the game mechanics are copied, point by point.

Joubert admitts that he wasn't totally surprised when he saw his creation cloned.

"Desktop Dungeons is obviously new creative ground in an area of gameplay and game design that people hadn't really explored that much before," he says. "People have described it as sort of genre spawning. In the way that you get Minecraft-like games now, I always braced myself for the time when I [would] see the first Desktop Dungeons-like game."

That doesn't make the experience any less painful. 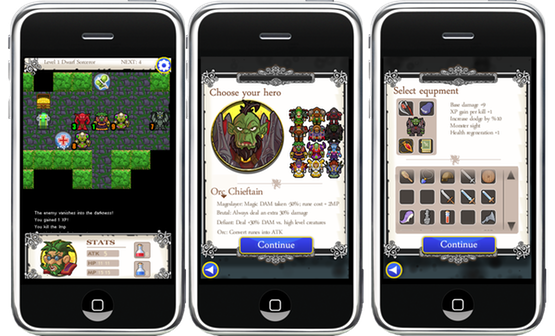 JOUBERT STILL BELIEVES THAT THE TEAM GOT LUCKY

"I think there were two factors that really grinded at me," Joubert says. "One: The design itself. The balance and the ideas that went into it were basically just taken. There was no real original creativity or balance or worth.

"And secondly ... I wasn't even making money from Desktop Dungeons, and I'm one of those sort of naive artistic types who isn't very pleased by the prospect about turning a hobby into a job. But the fact that someone was able to joyfully turn my hobby into a job and earn from it, and on top of everything else, not even asking for permission, it's really like somebody has broken into your house. It's the intellectual version of that violation."

With the game now on the App Store, Day drafts an email, describing in detail all of the gameplay elements that Ferraro has copied from Desktop Dungeons. The list is enormous, with over 40 examples ranging from exploration to class systems to combat, all copied from Desktop Dungeons to the clone. The list is sent to QCF's lawyer, who then informs Apple.

Upon hearing that his game is under suspicion, Ferraro takes action, removing any mention of Desktop Dungeons from League of Epic Heroes. He also started defending himself in the TouchArcade forums.

In a forum post, Ferraro writes: "We can talk all day about philosophical right and wrong, but at the end of the day, it is what it is, and QCF can make of it what they will. Where they see clones and theft, I see opportunities for them to market, 'relaunch'Desktop Dungeons in the public mindshare, and to inform everyone about their upcoming game that people WILL buy, despite my release. I encourage them to think less like lawyers and more like businessman, and take advantage of the unique marketing opportunity that a competitor's game allows."

Ferraro's resolve diminishes upon receiving a copyright infringement notice from QCF's lawyer. He removes League of Epic Heroes from the App Store, fearing costly legal expenses. The clone is dead. QCF has won.

Joubert still believes that, despite being targeted and cloned, the team got lucky.

"It's very unrealistic to feel bitter or to continue harboring anger about it," Joubert says. "Whenever I think about this sort of thing, I always contrast us with less lucky companies that have these stories where the cloner did come out on top." 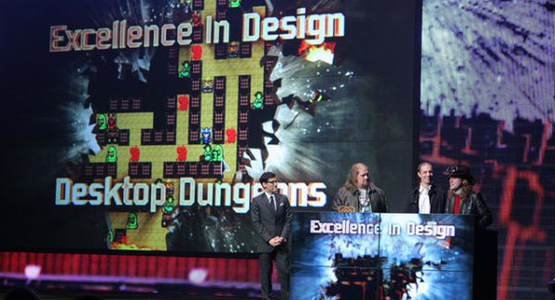 Just two months after the removal of League of Epic Heroes from the App Store,Desktop Dungeons went on to win the Excellence in Design award at the 2011 Independent Games Festival. The game has entered beta (accessible to those who pre-order), but the alpha version remains free for all. QCF still plans to bring the game to mobile devices. 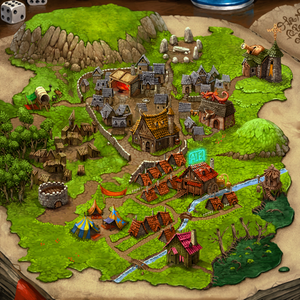