Gearbox Software's Aliens: Colonial Marines is the canonical sequel to James Cameron's Aliens. During a panel today at New York Comic Con, the development team along with special guest actor Lance Henriksen discussed the challenges of creating the film's successor in the form of a video game.

"After completing Brothers in Arms, we decided to try two other things: to use our credibility to create a new brand, and to see if we could get someone who owns one of our favorite brands to trust us to create a game with that brand," said Gearbox president Randy Pitchford. "The first was Borderlands. The latter was Aliens: Colonial Marines."

The game is "pure Aliens canon," says the team, with emphasis on the colonial marines and promoting teamwork between them during gameplay.

"There were two itches that needed to be scratched," Pitchford said. "Anyone who has seen the Aliens movies shares these itches. The first one is, there was some story you felt was supposed to happen after that first movie, and Aliens 3 was not it. Once we knew that universe is larger and there were colonial marines, we wished for a bigger, wider experience. We never got that.

"The other itch is, the opportunity to become a character in the movies in a video game medium, to be a hero in this place... We want to be colonial marines." Pitchford added.

Pitchford then pointed out a group of Aliens cosplayers seated near the front of the room, stating, "These guys right here, they're living the dream."

"In a video game we can live the fantasy of being one of these guys and living in this situation, filling the gap in the story that should have been filled after Aliens," Pitchford said. "That became the nut we needed to crack."

The team's goal was to fit into Colonial Marines series staples that came before the game, but to also create something new on their own.

"We thought, what if this was really big, what if we made it really huge?" said lead writer Mikey Neumann. "We really go to war in this game. We really push back at the cannon."

Henriksen reprises his role as the android Bishop and takes on the new one of sinister antagonist Michael Weyland in Aliens: Colonial Marines. For Henriksen it's been both interesting and rewarding to bring back on the android, or as Henriksen prefers "artificial person," a character he hasn't touched on in over 25 years.

"I've been to conventions and so many young marines come up to me and tell me that they saw Aliens when they were little and that inspired them to become a marine." Henriksen said. "It's really something."

The team promised players would be revisiting locations from the Aliens films before asking the audience to turn off its recording devices and firing up a round of never-before seen footage for the game. 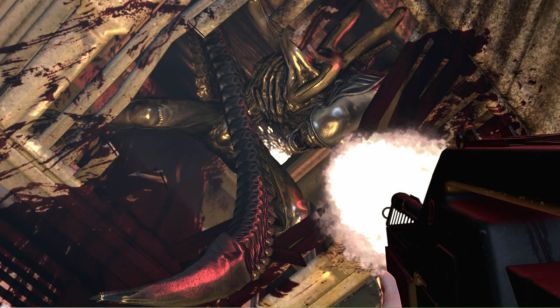 The footage began on a rocky landscape, the marines slowly picking their way across the jagged terrain. They have crash landed on the surface of LV-426, finding themselves sifting through broken vehicles and finding abandoned dog tags.

Everything is covered in an eerie blue-green wash, the sky is jammed with angry gray clouds, and the scream of wind and rolling thunder is deafened. Rain spatters across everything, lightning splits the sky, smoke rising from glowing iridescent pits. In the sky above hang two crescent moons.

The marines continue on through fire and rain, questioning each other about the squad sent to the planet 17 weeks ago. No one has an answer. They crest a hill and find the ruins of a base, all which is left of the colony from Aliens after the deadly explosion.

As they approach the colony, a loud familiar screech rips through the air.

As they move into the base towards the Operations room, the darkness grows thicker. The team finds an audio log of a woman begging her mother for money. A little girl interrupts the woman's plea.

"Just a minute Newt," the mother responds before the audio cracks off.

The motion tracker picks something up. Something is rattling against the metallic husk of the colony. The sound of something stomping around above calls the marines attention and they move forward.

The crew has to use a welding tool to open the door to Operations. All the lights are on, bathing the room in red. As Bishop fires up the control table, the marines poke at charred skeletal of what must have been the colony's inhabitants. One is burned into the ground with acid. Bishop finally powers up the control table.

The tension and suspense of the Aliens films are there; the yawning openness of LV-426 and the suffocating claustrophobic guts of the colony make it feel like the player is walking through the movie set.

"If you love the Alien films, there's a lot of tension," Pitchford said once the footage had ended. "The fun of being in the boots of these marines isn't always having the alien in your face, but feeling that sense of exploration and discovery. You're in the movie, and you control the camera—you're like a virtual tourist in these sets."

"With the Aliens tools available to us we can do high action like nobody's business," said design director John Mulkey. "We've even got the motion tracker - thank you James Cameron for designing that. You can't have something running at a nine then turn it up to 10 and expect people to notice. We need to build up to those moments so when the action comes it's like, holy crap."

The team noted that there are piece of in-game content that pay fan service to the movie, such as the mention of character Newt in the footage.

"If you've seen the film it's fan service, and if you have seen them it's content," said Pitchford. "I like that approach. Playing with that sort of dissonance between the two entry points, whether you have previous information or you don't, and making it work for all minds was a trick."

"We're the guys carrying the Aliens torch now," Neumann said. "We wanted to make sure we found the right promises to fill."

"This is not a two-hour experience, you've got 10-plus hours to explore this universe," added Mulkey. "And you're going to want to turn the lights back on."