Share All sharing options for: Even for the makers of Farming Simulator 2013 there are topics too niche

The surge of oddly niche simulation games is over, according to Farming Simulator 2013 developer Giants Software.

While titles such as Street Cleaning Simulator exemplify a period when the genre was flooded with unusual simulations, there is now an internal awareness of what is "too niche" within simulation games development, Giants Software's art director Thomas Frey told Polygon.

"For us, it's clear that there are only a few topics for simulation games left which are worth developing," said Frey. "Three to five years ago there was like a gold-rush mood in Germany and many simulation games were released. It was like ... Just create a game, slap 'Simulation' on the cover and you'd make a fortune. There were funny titles like Street Cleaning Simulator or Garbage Truck Simulator and the market was flooded with various simulation games. Today we have seen a consolidation of the best ideas like Farming, Truck, Bus and Ship Simulator and many of the funny titles have disappeared.

Farming Simulator 2013 is the fourth installment in the series, created by a core team of four to six developers. Its primarily European fanbase is led by Germany, France, Poland, Scandinavia, and the United Kingdom. However, prior to the release of the first title in the Farming Simulator franchise, there was no research to find out whether there was a market for such a product, says Frey.

He explains the success of the farming franchise was built upon three things: "the idea, a prototype and a publisher believing this could work out. I think no one here really expected that this game would be so successful and become a fresh ongoing franchise which became bigger with every version." 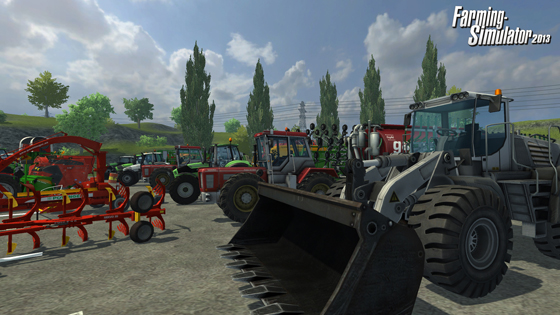 "Some people say Farming Simulator is relaxing and they like playing it after a full day of work," says Frey. "The gameplay doesn't force them to do anything, the player can freely decide what to do. With an open world sandbox the player can do whatever he wants to do. Also, the game allows you to play endlessly. Other players play Farming Simulator because they can do something they can't do in reality.

"I heard a story once of a bus driver who plays Bus Simulator during evenings after work. He likes to be a bus driver and said, 'my job (when I'm driving a real bus) is very stressful and hectic but in the game I can execute my (dream) job in a relaxed setting and have more fun ... it's like I'm in an ideal world where I can do whatever I like.'"

Planning to expand into North America

Frey adds that the series is not nearly as successful in North America as it is throughout Europe, due to the "European feel, style and approach" of the game; However, the developer still plans to expand to North America.