The basement in one of the nation's best art schools is replete with video games. Sega Saturns. Nintendo 64s. Enough fight sticks to hold a modestly sized Street Fighter tournament. A space that used to be the domain of New York University's prized film school has been gradually co-opted by the NYU Game Center.

In the past few years, the program has established itself in NYU's Tisch School of the Arts, offering an undergraduate Minor in games and providing a lecture hall for dozens of the medium's brightest and boldest voices. This fall, the Game Center's new Masters program will host its first students.

But what exactly is a degree in Game Design? What do students get for roughly $100k in tuition?

NYU Game Center's director Frank Lantz doubles as the creative director at Zynga New York (formerly Area/Code). He found some time between the gigs to talk with us about the program's ambitions and the student's creations, along with the role the program will play in making NYC a haven for game culture.

Lantz had taught the subject of games at NYU's Interactive Telecommunications Program for 16 years before the university asked he set up a games department. Lantz recalls that time, and pretty much everything else, in long, effusive sentences. His excitement is contagious.

"One of the things I love about ITP," says Lantz, "is that the elevators open up and you walk into a place that feels like a real thriving community. [The program is located on one floor of the Tisch building in downtown Manhattan]. It's not just like, 'Oh there are classrooms here and people take classes,' but this is a community of people collaborating and there's this buzz of energy and this activity and people are meeting each other and having a thriving social experiment and they can make connections. That's the vibe I want, a living breathing community of people collaborating and making cool stuff."

In 2008, before the NYU Game Center had fully established its identity, Lantz was hosting lectures and Q&As with designers like BioShock creator Ken Levine. For nearly two decades, NYU has had a number of game related programs spread across the university's many schools; the lectures unified those students for the first time.

Now, the Game Center students have not only the basement, but a floor in Tisch to call their own. A place where the elevators open to occasional GoldenEye match-ups and independent game installations. A sort of game studies sanctuary.. 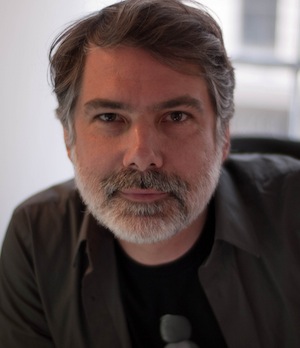 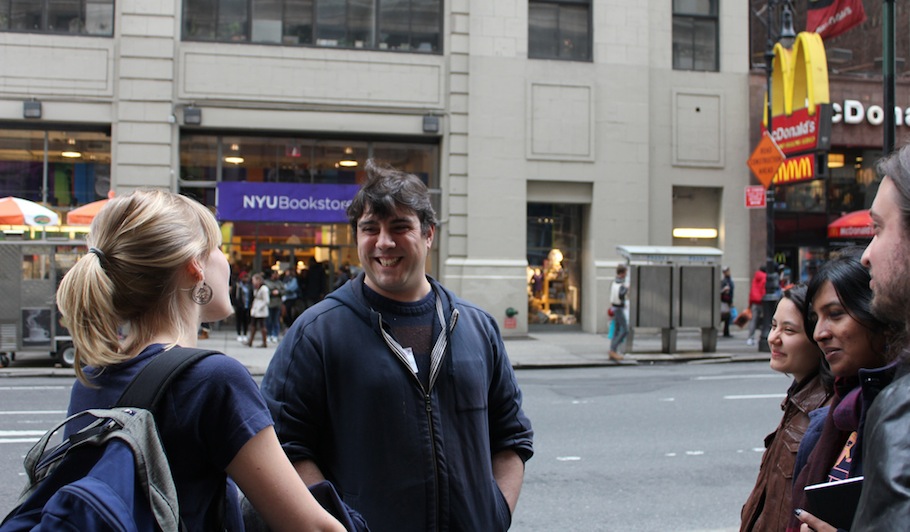 "First of all," says Lantz, "USC [University of Southern California] is the best. I love that program. I want to be like them in many ways because that's a program in which the graduate students are doing important work that's changing the world of games while they're learning, studying, and making the stuff ... We want to have a friendly rivalry with them."

USC is known for having closer ties to the games industry, what Lantz calls "a complementary relationship."

"The industry is great," Lantz says. "It's vibrant and innovative, but there are things that you can't do in a context judged by markets prices. The university can create a context for exploring ideas that are maybe more experimental or radical or unusual or personal, and innovate in a way ... where you can take more risks and try things that maybe have a longer term payoff that is beyond the horizon of the profit based criteria of the marketplace." 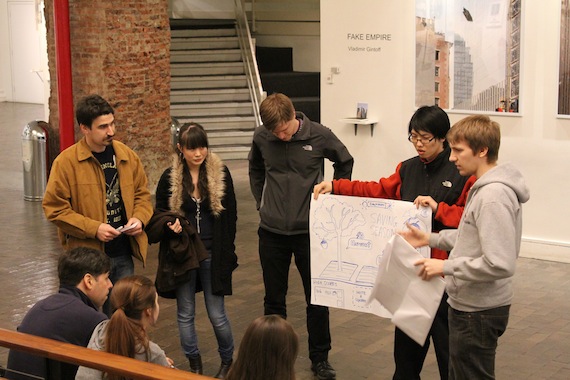 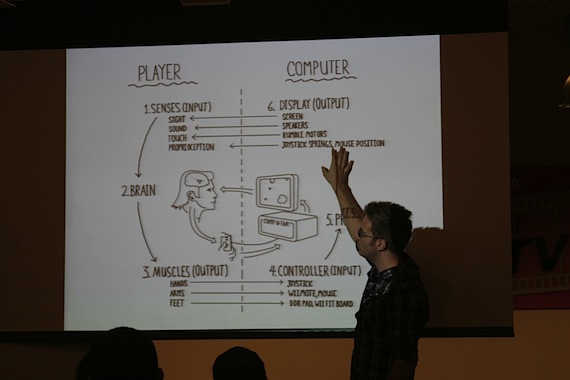 "WE WANT TO TAP INTO OUR NYC IDENTITY AS BEING A LITTLE BIT LIKE OUTSIDERS TO THE TRADITIONAL GAME INDUSTRY." 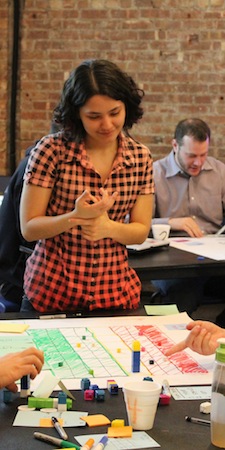 Lantz's pitch intentionally echoes the role NYU plays in film. Since the 1970s, the school has been educating filmmakers of the American New Wave and modern indie scene, directors like Spike Lee, Martin Scorsese, Ryan Fleck, and Anna Boden. Grittier, or as Lantz says it "whiskey-er," artists who produce personal, eccentric, and sometimes incredibly popular work.

"Hopefully," Lantz says, "we can have that same kind of influence on the evolution of games now. It's NYC and it has a certain attitude when it comes to the creative arts and the kind of people that it attracts."

Incoming student Diego Garcia says the city inspired him in part to formally commit to the program last spring.

"Since coming to New York a little over two years ago," says Garcia. "I've really fallen in love with the atmosphere and games community. The NYU Game Center's lecture series played a huge part in me deciding to pursue game design full time, as did [local game evangelists] Babycastles."

"New York is probably more likely to have students that go on into a mix of careers that are entrepreneurial and probably more independent," says Lantz. "Like starting their own company or being a freelancing designer or things like that, as well as starting and getting a job at Valve which is I think everything that developers desire."

Because though the school is known for auteurs it has produced the occasional blockbuster maker. Like Brett Ratner. 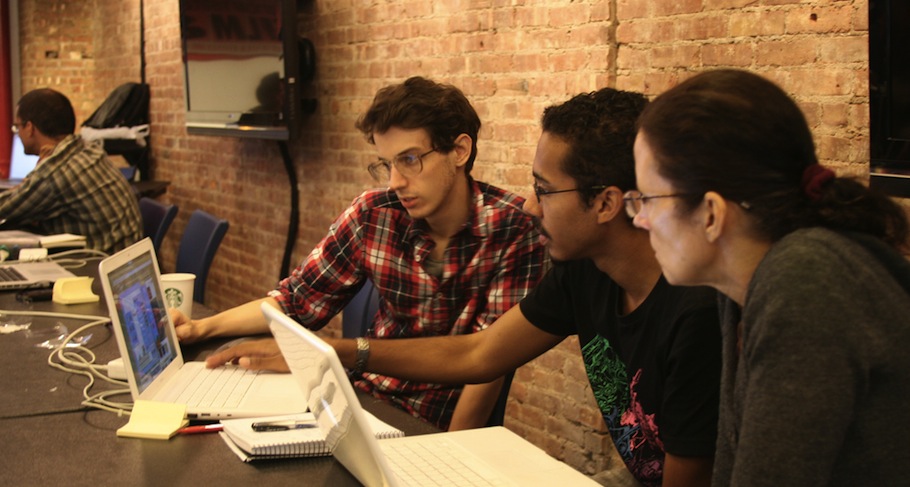 NYU Game Center has differentiated itself from many of its contemporaries by leaving "video" out of its official name.

"Primarily video games are the reason we exist," says Lantz, "[They're] what's creating this moment that we're in historically. There's this explosion of interest and excitement because computers and games came together and had this crazy love affair, this amazing super child that is changing the world, but is still weak."

"But we also see video games within the larger context of a form of culture that's been around forever," Lantz says. "That's part of our approach. We don't see these hard and fast lines ... we have students already who have worked on making physical games or board games and then also [make] computer games, video games, digital games."

The ITP program has a reputation for creating games with non-standard interfaces, often products of its Big Games class. There's Full Package and Mime Tribe. PacManhattan andSocial Bomb. Games that make use of any medium necessary in order to convey a message, an experience, or just a set of rules.

Lantz is passionate about these sorts of ambitious, perspective changing projects.

"That was always a part of my background," says Lantz, "games that crossed that line, that had one foot in the virtual and one foot in the real and that were embracing the long tradition of games as beautiful and important parts of culture and using the computer to extend that in different crazy ways, but never being satisfied with that rectangle of the screen and saying 'this is the only thing I'm interested in: creating a little imaginary world with dragons in it'."

"Games are experiences," says Lantz, "and they transcend any particular platform ... The important thing is to think about what you're making and not just how it's going to be awesome, but also how it fits into the world. The questions are always the same: Why are you making this? What does this game have that's different, new, personal, that's different, that holds people's time and attention? Why is it worth your time to make it, and why is it worth somebody else's time to play it and think deeply about it or fall in love with it or all the things we do with games? Whether that's a game that you play on your watch or a game that you play on your Ouya, I'm agnostic. We don't have a house style." 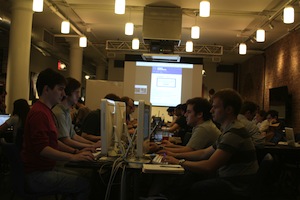 Tuition at the graduate level is roughly $45-$50,000 per year, the standard Tisch Graduate program rate. With work study and scholarships available, students may bring down the number, but there's no doubt it's a serious financial commitment. For some students, the program's two-year cycle helps lighten the financial burden.

"USC is a spectacular program," says Garcia, who was accepted to both programs, "with great facilities, [with] new ones on the way. And one of my favorite companies, thatgamecompany, was founded by graduates. The only real issue I had was finances. USC's program is three years, which means more time to develop yourself, but also means another $50,000."

"USC'S PROGRAM IS THREE YEARS, WHICH MEANS MORE TIME TO DEVELOP YOURSELF, BUT ALSO MEANS ANOTHER $50,000."

Undergrad or grad or another school

Undergrads can take a number of courses from game production to game scholarship. A minor in game design is also available, which Lantz says will probably turn into a major in the "none-too-distant future."

"They're going to go on to become doctors or lawyers," says Lantz, "and a lot of them now [want] to be game designers." I joke about how that might make their parents feel. Lantz laughs. "Yeah," he says, "conversations with their parents on the phone, like 'I think your son wants to be a game designer now' - it's just kind of a beautiful thing."

"Part of our goal is that we want to open that up for people who might not have considered it. Like, 'that is a thing that you can do with your life and it's not such a bad thing to do nowadays'." 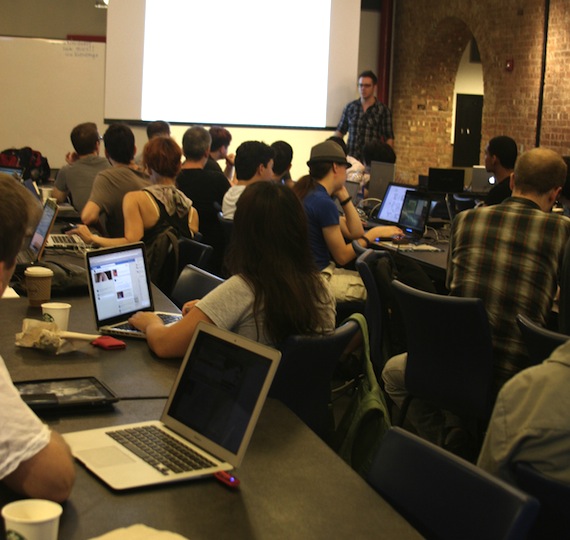 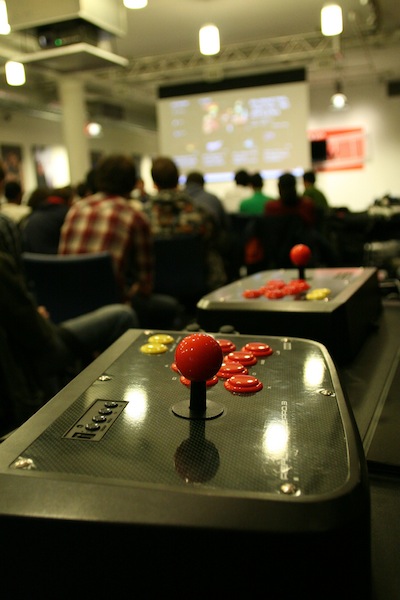 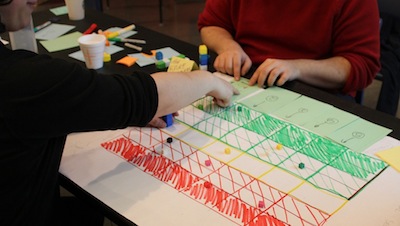 Lantz describes the graduate program as similar to the undergrad program, but more advanced, more intense, assuming a higher level of skill and knowledge coming in. More responsibility and autonomy are given to the students.

Says Lantz, "It's really focused on building a laboratory for high level creative experimentation and also a launching pad for people to go on and change the industry, change the world, and do amazing things and have a successful career. Does it sound like an infomercial?"

Frank Lantz's career sounds like what a student might have stepping from college into this new economic environment I will politely call 'crappy'.

For 20 years, Lantz has had one foot in academia and one in the games industry. While he says it's stressful, he acknowledges the two have benefited one another. He brings his experience in-the-trenches of development and making games for a living to the school. And from the school, he gets greater perspective of the big ideas, the theoretical possibilities. The school's also been a boon for recruiting. Much of the talent in Zynga New York has come out of NYU and ITP.

"I also think in a way that this is kind of how things are moving and maybe all of us are moving in that direction" says Lantz. "At least all of us that are in this post industrial capitalist, post modern, information economy." Lantz finishes the sentence with a self-aware laugh. "We all are thinking less about having a job that exists and 'I come to work and that's my role'. Instead I have these projects that I'm doing, and one of them is that I'm trying to make an amazing Facebook game that will change the role of social gaming and people will say 'oh that's what we've been missing all this time'."

And so it begins

Diego Garcia and his fellow students have been in touch over the summer, first via a Google Group and more recently in person.

"So far everyone has been really friendly and interesting," says Garcia, "coming from a variety of different backgrounds and clearly with different focuses and thoughts about games. We're going to see a wide variety of games coming out of the Game Center and I think they'll all be worth paying attention to."

Garcia is actually deep into the development of his next game:Heads Up! Hot Dogs for iOS. It's certainly not another dragon game. 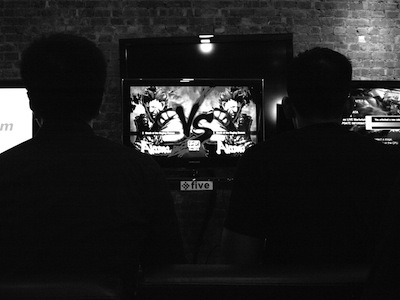