Treyarch is challenging the "fundamental assumptions" of Call of Duty with Black Ops 2's new multiplayer features, breaking a few rules in the process.

Share All sharing options for: 'Black Ops 2' and Treyarch's new rules for Call of Duty multiplayer

To the casual observer — or maybe the forum-dwelling grump who delights in taking shots at Activision's billion dollar franchise — this year's Call of Duty will look a great deal like its forebears. Only this year, with Call of Duty: Black Ops 2, the multiplayer battles take place in the unexplored near future, an online war fought between men and remote controlled drones. Black Ops 2 will, naturally, deliver the high-speed, explosive multiplayer slaughter that has made the series a bestseller. There will be perks, weapon unlocks, and millions of bloody, glorious firefights — all running at a smooth 60 frames per second — between hardcore virtual soldiers. But developer Treyarch is reinventing many of the established systems in Black Ops 2, the follow-up to the bestselling Call of Duty of all time with more than 25 million copies sold. It's the studio's fifth Call of Duty multiplayer effort and easily its biggest in scope.Black Ops 2 will offer class customization that tosses out the traditional rules of Call of Duty multiplayer. It will place a much larger emphasis on catering to the eSports crowd. And with the introduction of League Play, Treyarch's new seasonal, skill-based matchmaking brackets, Black Ops 2 will separate the men from the boys — specifically those highly-skilled teenage boys who always seem to be on the delivering end of a no-scope headshot and an insult. 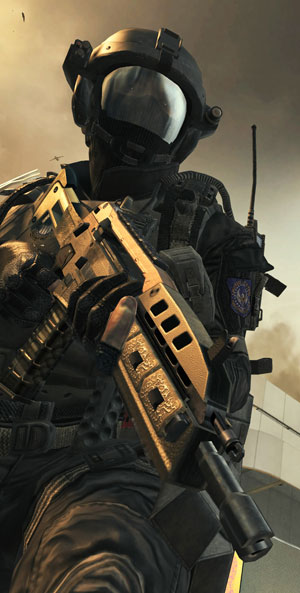 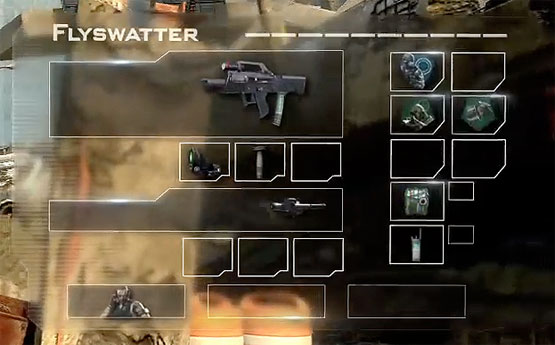 Here's an example: If you find yourself rarely using your secondary weapon, you can simply drop it from your custom class. That frees up a slot for something else; an extra attachment for your primary weapon, perhaps, or a second explosive grenade. Or you could equip a back-up tactical grenade, like the new Shock Charge, which stuns enemies with a bolt of electricity. You can even bend the rules by customizing your class with a fourth or fifth perk. Call of Duty: Black Ops 2's debut multiplayer trailer shows an extreme example, a custom class armed with nothing but a combat knife, revolver, and six perks.

These rule-breaking custom choices are made possible thanks to the inclusion of Wildcards. Equipping a Wildcard will consume one of your ten available slots, but it allows for customization unseen in previous Call of Duty games. With Wildcards, players can equip two primary weapons (rifles, shotguns, SMGs) or affix three attachments (red dot sight, extended clip, stabilizer) onto a single gun.

"It was important for us to challenge our assumptions about Create-A-Class," said David Vonderhaar, game design director at Treyarch. "When we started development on Black Ops 2, we were really passionate about and inspired by the need to challenge all of the core assumptions about what cows were sacred inside the game. So every gameplay system has been re-examined very critically and carefully to be sure that we give the player the utmost control over his experience. All these changes push the boundaries of what fans expect, but we do it in all the right ways that they'll be okay with.

"We didn’t want to take anything for granted. We asked ourselves some very key questions: Why is all content in Create-A-Class so rigidly structured? Do we do this for game balance? Was it usability? Why do we do things that way? What if everything was in a giant bucket?"

Treyarch tested "Pick 10" customization and Wildcards by playing a separate game altogether. Vonderhaar says the studio built a custom, deck-based board game based on Black Ops 2's Create-A-Class system to explore the "core philosophy design at a paper level."

"It allowed us to try ideas, play them out, and test them without writing a single line of code," he says. "I will never design games again without this process."

The process of actually editing your custom classes is quicker and more efficient in Black Ops 2, thanks to the reworked menu system dubbed "the Grid." Gone is the old way of diving into a menu, burrowing deeper, then backing out to the top. Players can now browse weapons, attachments, and perks with a visual carousel a la Cover Flow, making it easier to compare and contrast class options.

In another change, albeit one slightly more subtle, the Killstreaks of the original Black Ops have been replaced by Score Streaks in Black Ops 2. Instead of doling out rewards like care packages and air strikes for racking up consecutive kills without dying, players will accrue points for both killing enemies and completing game mode objectives.

“We want to reward players who are helping their team win the game mode, not just the game.”

A normal kill in Black Ops 2 awards players 100 points. Grabbing an enemy flag in Capture The Flag mode also nets 100 points, whereas a flag capture awards 150. Making a kill while carrying the flag awards a hefty 200 points. As those points add up, players accumulate Score Streak rewards. So, when a player's score reaches 375 they can call in a UAV. At 500 points, they can request a Lightning Strike attack. At 1275 points, Treyarch's trademark attack dogs become available.

Certain Score Streaks can add even more points to your score. While your UAV is active, for example, you'll get a 25 point bonus for every kill your teammates make. Those assist points can quickly add up to Score Streaks far deadlier. 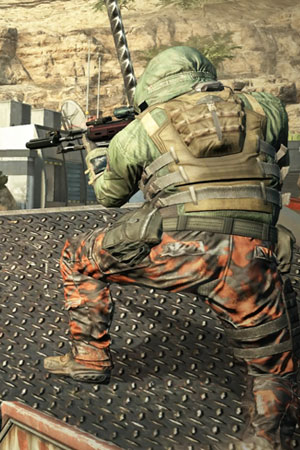 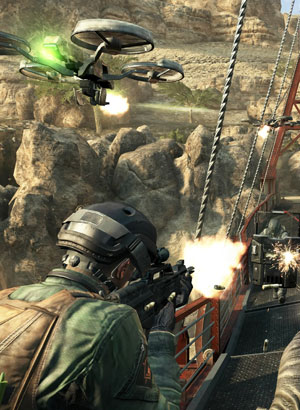 Treyarch's Vonderhaar says the adoption of Score Streaks was designed to encourage "desirable gameplay behavior," whether it be securing territories in Domination, placing microwave emitter sentries to block routes, or calling in a UAV.

Treyarch's made some changes to the way players use their streak rewards, with new interaction states and swap in, swap out control of certain combat vehicles like the AGR (Autonomous Ground Robot), the mechanized killing machine that looks like a pint-sized ED-209. At any time, players can whip out a control pad for their AGR, assume control, kill a few enemies, then relinquish control back to the AI.

Other examples of streak reward interaction provided by Treyarch include the option to instruct an AI-controlled pilot to relocate to another position on the map and the option to burst fire a Hellstorm Missile attack mid-drop, either to spread the destruction over a larger area or concentrate it in a tight cluster.

Black Ops 2 will boast about 20 Score Streaks, including Swarm, seen in the game's premiere multiplayer trailer. Swarm fills the skies with Hunter Killer drones that attack enemies and equipment in a "morale destroying swarm."

Changes are also coming to Call of Duty's perks system in Black Ops 2. No longer will perks have an effect on the performance of your guns — no Deep Impact for better bullet penetration, no Steady Aim for improved hip fire accuracy. All weapon-related enhancements are limited to attachments, Treyarch says.

"That is the best way for us to allow you to have an experience with that gun that is appropriate for that gun," Vonderhaar explained. "You'll see it. You'll see the laser sight. You'll have some context for why you just got mowed down by an opponent. Visualizing gameplay is always more visceral than a guy with an icon that you didn't get to see. And we can tune the weapon to its attachments."

That means not every gun has access to every attachment, naturally. The burst fire add-on for a semi-automatic rifle would not apply to a shotgun, for example. New attachments coming to Black Ops 2's weapons include the Target Finder, a sight that makes it easier to separate friend from foe on the field, and the Millimeter Wave Scanner, a powerful optic that can see stationary enemies at close range through walls and objects.

Treyarch has scrubbed "absolutes" from perk design, Vonderhaar said, the hard and fast rules that make perks more difficult to balance. As an example, he detailed changes to the perk "Ghost" from the first Black Ops. Ghost's previous iteration made players undetectable by UAVs, infrared sensors, and sentries. In Black Ops 2, Ghost's benefits only apply while players are moving, a design change that hopes to prevent the perk from being exploited by campers.

Getting your hands on all those weapons, perks, and streaks will require leveling up through Black Ops 2's take on Call of Duty's oft-imitated method of player progression. Player progression in Black Ops 2 will span 55 levels of rank and 10 levels of prestige, and Vonderhaar says Treyarch hopes to "return some simplicity to the progression system."

"We don't want players to be overwhelmed," he said. Unlockable content will be gated by ranks. As players hit major rank changes, they'll get access to new chunks of content. "If I give you seven or eight things at a time, it's pretty digestible."

The game will mete out weapon and gear purchases by giving players one token each time they level up, which they can spend on new weapons, equipment, and perks. By the time players reach level 55 and have cashed in all those tokens, Vonderhaar says, players still won't have unlocked and seen everything multiplayer progression has to offer.

“COD Points were really awesome, but I could just buy everything I wanted at level 33. Now I still have something to look forward to.”

Some of the new weapons and equipment players can look forward to unlocking include the M1216, a semi-automatic shotgun that rechambers every four rounds; the AN-94 assault rifle, which fires its first two rounds at a faster rate; and the Raging Judge revolver, a beast of a side arm that fires shotgun shells.

Also new is the Assault Shield, a tactical shield that can be used for cover while moving, but can also be planted into the ground, creating stationary cover for your team. Defending your teammates with the Assault Shield also scores points toward a Score Streak, more encouragement for desirable gameplay behavior through teamwork. 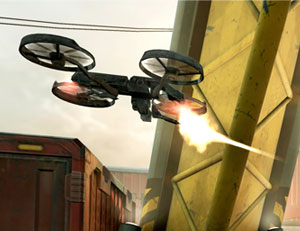 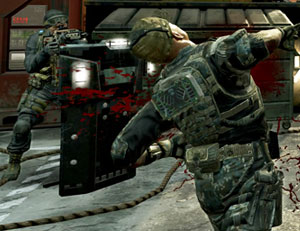 The thrill of watching Call of Duty: Black Ops 2 is just as important to Treyarch as playing it, which is why the developer is making a major push on its eSports initiative, adding League Play, player ranking brackets, and shoutcasting tools to the game. Read more about that here.

Treyarch is promising even more with Black Ops 2, with still unrevealed updates to Challenges (which "return with a twist"), Theater Mode, Combat Training, and new "Core and Party Game types," which the developer calls the "evolution of Wager Match" mode.

We'll see what further fundamental assumptions Treyarch feels like challenging by the time Call of Duty: Black Ops 2 ships for the Xbox 360, PlayStation 3, and Windows PCs on November 13th, 2012.