Why a couple dozen men in New York are preserving the anachronistic rules of 150-year-old baseball.

Open World is a regular series covering games without video. This is our first entry. It's too hot for baseball. Then again, the men on Governors Island aren't playing baseball. This is 1864 vintage "base ball." The ball players, men ranging from 30 to 60, have come to educate a couple dozen attentive children on the way America's game used to be staged, and despite the summer's best efforts — triple digit temps — they are undeterred. On the sideline sit wives, girlfriends, and children, guarding modern pleasures like folding chairs and water coolers. I can't help but wonder if they're thinking what I'm thinking: Aren't the 30 Major League Baseball teams and hundreds of professional players doing enough for the sport?

To an outsider, it's absurd. The vintage players look like dehydrated clowns: sweaty ovals have formed behind their knees, thanks to their heavy historically accurate pants; worse are the jerseys, which have thick breast folds, trapping heat against the chests, roasting their lungs like Thanksgiving turkeys. "Oh God," I think, "they're going to kill themselves." I'm trapped in the beginning of a Law & Order episode.

A panting outfielder directs me to Brad "Brooklyn" Shaw, a sort of mouthpiece for the league.

I find Shaw in the Neshanock batter's box, a rectangle of dirt temptingly close to the coolers. Like a consiglieri, the tall, grey-haired man is surrounded by younger, stronger players who prefer to be identified solely by nicknames like "El Presidente." It's intimidating to interrupt their conversation.

I learn Shaw is a software manager for JPMorgan Chase, but on summer weekends and weeknights, he circuits the libraries and ballparks of the Northeast teaching Americans about the origins of their national pastime — often by recreating it with the help of the 1873 Neshanocks, a vintage team he formed in 2001.

Authentic shoes, El Presidente tells me, would be too dangerous. "We all gotta go to work on Monday."

Today, the Neshanocks are playing the 1864 Gothams. Before I can ask Shaw for any profound insight, he's mosied towards home plate, egging on the Gotham's pitcher. Shaw's at-bats are miniature performances. His gut lifts up and down, calculating a central point of gravity, while his hands twirl a bat, as if it were whipping the air above his head to a thick cream.

I notice Shaw's feet look hooven. His modern cleats have been blacked-out by layers of shoe polish. Authentic shoes, El Presidente tells me, would be too dangerous. "We all gotta go to work on Monday," he says. 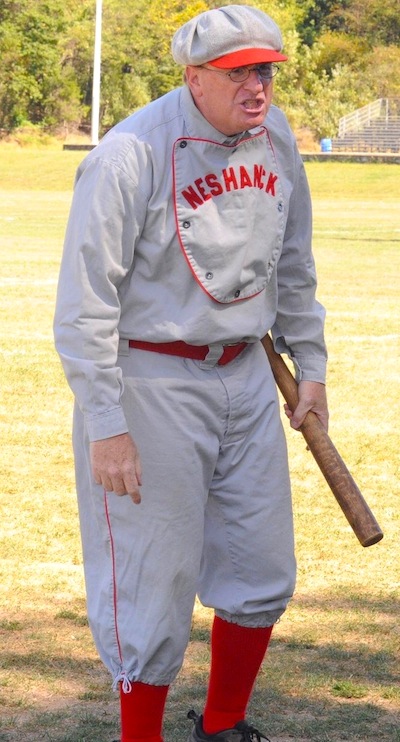 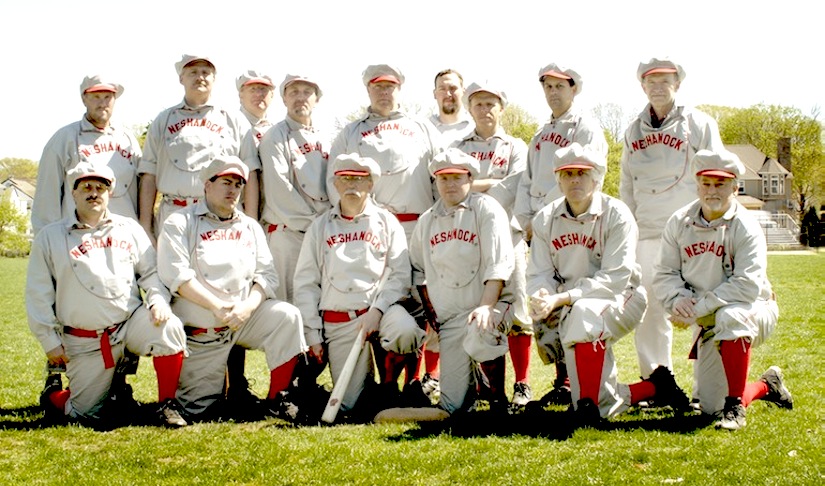 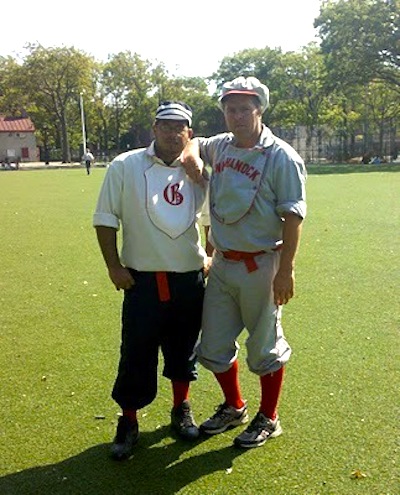 I hear a pitch and in a flash Shaw's bat whooshes across the plate, pulverizing the ball. Crack! The eyes of nearby children dilate as they track the ball's arc past the sun. For a second, it hangs there. Then the ball careens back towards Earth and ricochets off the dirt behind second base, popping into the hands of the center fielder. "You're out!"

Brad "Brooklyn" Shaw is out. The bounce rule of 1864 says any fielder may catch a fly ball for an out, so long as they do so in no more than one bounce off the ground. Governors Island is the home field of the 1864 Gothams, thus the game is played by its historical rules.

"Any boy of five can catch the ball off a bounce," says Shaw, loud enough for the outfielders to hear. If this were 1873 ball, Shaw says, he'd be on base.

The rules are key. There's 1864 ball, Shaw says, where fielders can catch a fly ball off a bounce; 1873 ball, which scrapped the bounce rule; 1883 ball, infamous for adding overhand pitching, forever speeding up the game, ultimately leading to the addition of the baseball glove; and "modern ball," condensed to baseball, a billion dollar pastime played by thousands and viewed by millions in the closest thing America has to modern day cathedrals.

"Any boy of five can catch the ball off a bounce."

I ask Shaw if keeping track of the various rulebooks becomes confusing. He tells me no, that you catch on quickly. There's just one important meta rule: that the rules must never mix. You don't have a little of 1873 ball and a little of 1864 ball. That would be sacrilegious.

But breaking the fabric of time, mixing the players, clothing and language of two different teams, one from 1873 and 1864, is not sacrilegious. Nor is setting the game in a clearly modern lawn on an island minutes from Manhattan. Nor wearing Nike cleats.

Rules first, details second — that's the policy of vintage base ball. Which is to say, presentation is nice, but what truly matters in a historical recreation is the veracity of the system beneath it. The rules are what the men are recreating, and the systems people create say plenty about how they perceive the world. Consider this:

Base ball began as a smaller, modest, slower game, accessible to those who could afford to play it on a "semi-professional" team. Mostly the prominent men of the local town. 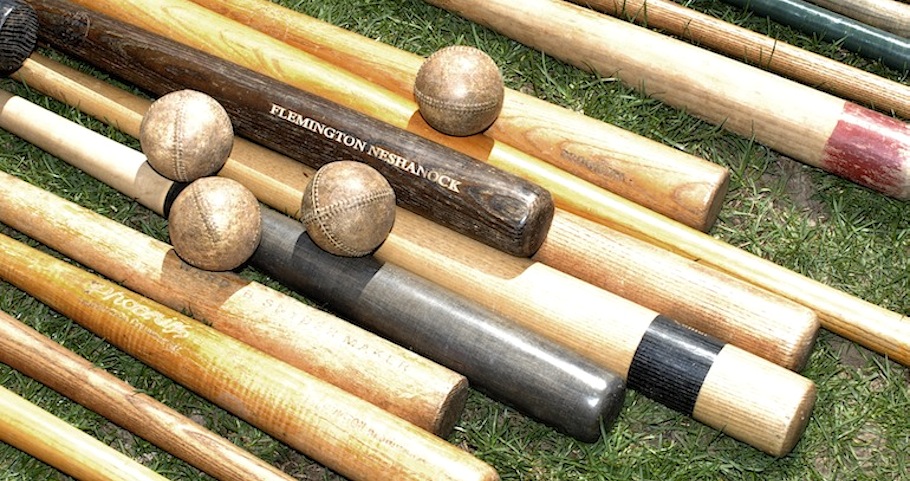 The evolving rules sped up the game and beefed up the players, developing a meritocracy, a game for specialists. A career for men looking to get rich, not just a pastime for those who already were.

Now the game is so complex and so fast, it's only understood fully by the most obsessive of fans, while its strategic ins and outs are explained by commentators who — for the casual attendee — are as vital to the game as the players.

Drawing political, economical, and personal analogies doesn't take much. It's 104 degrees and my brain is making connections between sports and games and the history of the U.S. and the current economic climate ... and oh God! What if I'm the head stroked victim of the Law & Order episode? 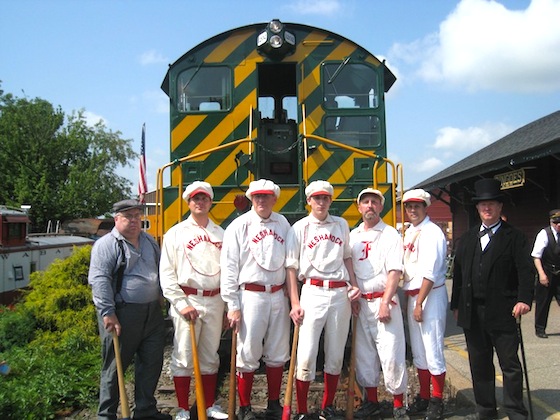 Vintage base ball, Shaw says, is like civil war reenactment.

I get a bottle of water from the coolers and chill out.

Watching the simple, slow original game on Governors Island, I see a view of what life in America was once like. Despite the unusual rules, I glean what's happening. The slow-motion pace gives me time to digest the player's strategy. No commentator necessary. No major stadium. No gloves even.

As the inning concludes and his colleagues swap spots on the field, I finally have a chance to ask Shaw my big question. Why? He takes a moment. Vintage base ball, he says, is like civil war reenactment. They're both an entertaining entry point for history, from which you can take as deep or shallow reading as you like. You can learn the customs, opinions, and lifestyles of the era. Or you can just enjoy the time outdoors in the summertime.

Vintage baseball is a more positive form of reenactment, I think. These men are killing themselves in a field on a hot summer day, recreating the game that brought our nation together instead of the war that tore us apart.

The Flemington Neshanock Base Ball Club