Cloning Case Files is a three-part series examining the personal impact of game cloning in the iOS app store. Each entry details the experience of an independent developer who suffered in some way from game cloning and how they worked to overcome the effects of cloning. This is part three. Here is part one, and here is part two. - Ed.

100 games per day. Every one of which needs to be tested for compliance on a range of iPads, iPhones and iPod Touches. Games are regularly rejected for bugs or inappropriate content, but with 100 games passing through the pipe every single day, some that don't belong are bound to slip through the cracks.

An iOS game called The Blocks Cometh is released by EdisonGame, an independent developer. It's a platformer which has the player leaping on a series of falling boxes, trying to escape death-by-crushing. Apple sees promise in the game, listing it in the featured "New and Noteworthy" category on the App Store, which helps The Blocks Cometh reach the Top 100 best selling apps list upon release. It's yet another indie success for the App Store. 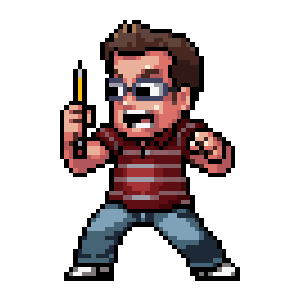 In recent weeks, Apple has started attacking cloners more extensively. An app developer named Anton Sinelnikov managed to get a clone of Temple Run to number one on the sales charts before it was removed. In addition to that clone, more than 50 other apps by Sinelnikov were removed. Despite such an egregious infraction, however, Sinelnikov still has 26 apps in the App Store. Even the infamous EdisonGame still has 10 apps listed, including one called Blocks Avalanche that seems to have been built off of The Blocks Cometh's clone (just with original art this time).

Melvin Samuel and Derek Laufman are a two-man Canadian development studio called Halfbot. The duo has been working on a number of large gaming projects and is starting to feel worn down.

"Melvin and I were in a bit of a rut and we decided to try to break up the monotony of what we were doing by trying to make a game a day," says Laufman. "That was our goal. So we took our lunch break and designed what the game was going to be. We tossed around a few ideas and, essentially, we just came up with the idea of a guy trying to avoid things from the sky. He's jumping on top to see how high he can get."

It takes just six hours for the team to make a prototype and, within a week, they release the final version as a Flash game called The Blocks Cometh. It achieves moderate success on sites like NewGrounds and Kongregate, but was far from a smash hit, with around 20,000 plays on those sites.

"It was January 13th," says Laufman. "We were about two weeks into development on the iOS version at that point. Melvin actually noticed it."

What Melvin Samuel notices is a game with the exact same name as theirs, which uses the exact same graphics, the same gameplay, the same logo. The only obvious difference is the protagonist. The Blocks Cometh's original spaceman is replaced by a ninja which has been pilfered from another game, called League of Evil.

"It was like 11 o'clock at night," says Laufman. "I had just left the office because we were working pretty late nights at that time. Melvin called me on my cell phone and told me. By the time I got home, I was in a fit of rage."

FEARING THEY WOULDN'T GET A RESPONSE FROM APPLE, THE TEAM STARTS REACHING OUT TO THE MEDIA

Laufman says he also felt helpless. "My first reaction was: I can't get ahold of anyone. At the time I started looking up online where to contact someone for something like this. All [Apple] had were a couple vague customer service emails. So I sent something out to them. Put together a screenshot comparison right away that night, basically a side-by-side comparison, wrote up a big description and sent that email out.

"But at the same time I was like, I don't want to sit back and hope they respond." 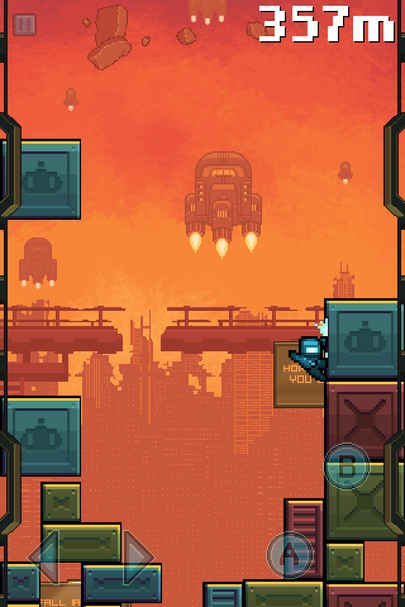 The Blocks Cometh, by Halfbot 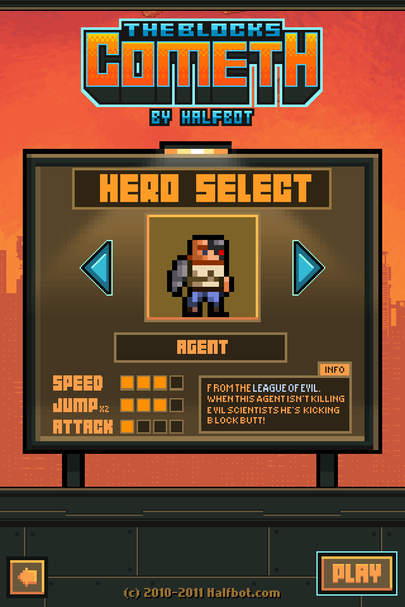 The Blocks Cometh, by Halfbot

At this point, the clone has broken into the list of top 100 best-selling apps and is being featured by Apple.

"We were panicking," says Laufman. "We're making our game and these guys are taking our money essentially. It's going to hurt our sales, the license itself is going to be diminished because they put out a crap game."

Fearing that they wouldn't get a response from Apple, the team starts reaching out to members of the media, explaining the situation. By the morning of January 14, the crime is splashed on Destructoid.

Four days later, on January 18, Apple responds to Laufman with a form letter, explaining that they were investigating the situation.

THE CLONE SIMPLY VANISHES FROM THE APP STORE

On January 21, the cloning of The Blocks Cometh story makes it to the front page of Reddit.

"A day after that article went up [on Reddit], the game mysteriously disappeared," says Laufman. It's nine days since Laufman had first sent word to Apple, but the clone is finally taken down. Apart from the form letter sent a week before, Halfbot never hears from Apple on the matter. The clone simply vanishes from the App Store.

CLONING IS HARD TO FIGHT

When it comes to game cloning, many cases are far from black and white. Game mechanics (such as the jumping-to-avoid-blocks mechanic in The Blocks Cometh) cannot be copyrighted, which opens the door for rival developers to swipe entire game concepts. The most recent example was perpetrated by Zynga, which recreated every gameplay aspect of Tiny Tower from scratch. But, since they didn't copy the code or the artwork of Tiny Tower, Zynga is legally safe from a copyright infringement ruling. The Blocks Cometh case was much more cut and dry, as EdisonGame directly copied the art from two different games.

Halfbot releases its official version of The Blocks Cometh on February 16. They team up with Ravenous Games (the developer of League of Evil, which had its ninja character stolen by EdisonGame), offering cross-promotional content in both titles as a unified front against cloning.
"APPLE SAID THEY WERE GOING TO START CRACKING DOWN. SADLY, I DON'T SEE IT."

Even though Halfbot is able to get the clone removed from the App Store, Laufman remains dissatisfied with how Apple handled the situation.

"A few weeks after our game got pulled, Apple released a letter saying that they were going to start cracking down on this stuff," he says. "Sadly I don't see it. I know the guy who ripped off [The Blocks Cometh] ripped off at least three or four more after the fact and I'm just like, how is this guy allowed to make money still? Ok, his game was pulled, but where's the punishment? I never want to see that guy's name again. I want to see all of his games pulled. That's how I felt.

"From my understanding of the Apple contract, when you violate their rules, they have the right to pull your stuff. So why didn't they do that? That would be my question to them. A simple slap on the wrist of just getting your game pulled. That doesn't deter anyone from doing it again."

Since its release in Febuary of 2011, Halfbot's The Blocks Cometh has been downloaded 113,000 times on iOS platforms. Yet another indie success for the App Store.