THE GOLDEN ABYSS ISN'T INNOVATIVE, BUT IT TRANSLATES THE UNCHARTED FEEL WELL

With Uncharted: The Golden Abyss, Sony is showing they've learned from Nintendo's tough lesson with the debut of the Nintendo 3DS. You can't launch new hardware without a big-name, hardcore franchise to back it up. That's the audience that will evangelize your new device, so you need to have at least one game that speaks directly to them.

Sony was clearly paying attention, launching the PlayStation Vita with one of its biggest franchises. Uncharted: The Golden Abyss is, at first glance, the strongest game in the Vita's opening line-up and would be an essential pickup alongside the new handheld.

The Golden Abyss begins with a blank slate, making a suitable jumping on point for the series. Nathan Drake is a globe-trotting adventurer, just looking to pay the bills with some priceless artifacts from the Old World. Most of the characters are brand new (since this is a prequel), but Drake's quest this time around will seem eerily familiar to series fans. There's an ancient mystery with the promise of treasure, a headstrong female protagonist, and a skeevy partner who's liable to turn on Drake at any moment.

The story isn't going to turn any heads, but the high-quality performance capture and voice acting from previous Uncharted games returns. As always, Nolan North's performance brilliantly captures Drake's Indiana Jones-esque comical fallibility, and the other performances are a treat as well.

These performances are even more convincing thanks to Uncharted's remarkable presentation. The Golden Abyss is, without question, the best looking portable game ever made. The character models and environments are on par with the first generation of PS3 games, excelling both indoors and out, atop sun-dappled temples or in tombs lit by flickering torches. To see that running in your hands is awe-inspiring.

However, the visual diversity of the Uncharted games on PS3 hasn't made the journey to the Vita. The Golden Abyss's environments are lovely, but can get repetitive. You won't be venturing out of the jungle at all in this one, instead trekking from jungle village to jungle proper, to jungle temple and then to jungle cave. Occasionally this recurring biome will be spiced up with something unique (like a memorable canoe ride on a subterranean lake), but these moments are rare and fleeting.

GOLDEN ABYSS IS THE SAME BLEND OF HOLLYWOOD-STYLE ROCK CLIMBING, THIRD-PERSON, COVER-BASED GUNPLAY AND OCCASIONAL STEALTH SEQUENCES THE SERIES IS KNOWN FOR

Uncharted veterans will find themselves on comfortable footing with the gameplay in Golden Abyss. It's the same blend of Hollywood-style rock climbing, third-person, cover-based gunplay and occasional stealth sequences the series is known for - an interactive action movie, filled with all the exploding barrels and crumbling caverns you can stomach.

The gameplay is safe, well-worn ground, digestible for anyone with a taste for the genre. It also doesn't stumble into the same non-interactive pitfalls as Uncharted 3, which is good news if you're pining for the series' roots. Golden Abyss does, however, fail to take risks, sticking with what's worked in past games without breaking much new ground, save for some cute hardware additions.

As the flagship of a new Sony console, Uncharted: The Golden Abyss makes use of the PlayStation Vita's front and back touch screens. Certain quicktime moments will have you drawing figures on the screen to execute finishing moves or to regain a handheld on a precarious ledge. Touch controls are also used to zoom in with a sniper scope or to solve puzzles, rearranging scraps of paper to complete a map, for instance. I was wary about their inclusion, but Sony's Bend Studios smartly made using these controls unobtrusive and infrequent. They may not add much to the experience, but they also don't take anything away, so we'll call it even.

MAN, THAT GUY IS GOING TO GET IT. 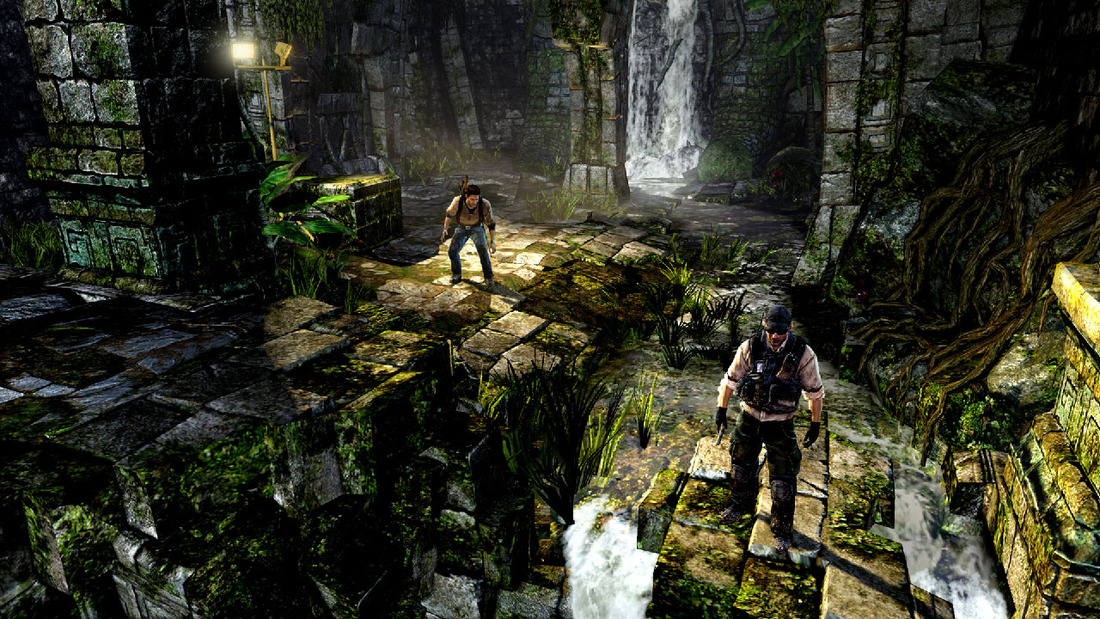 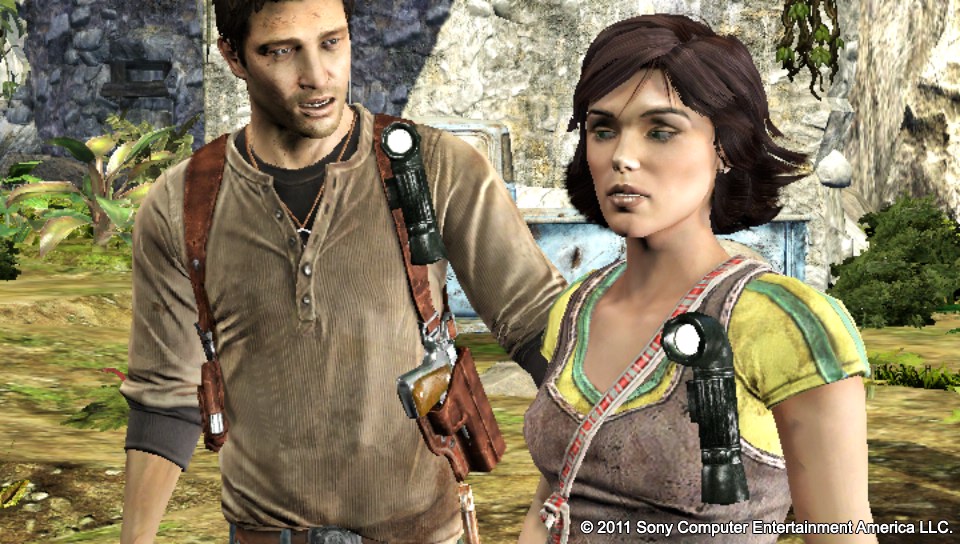 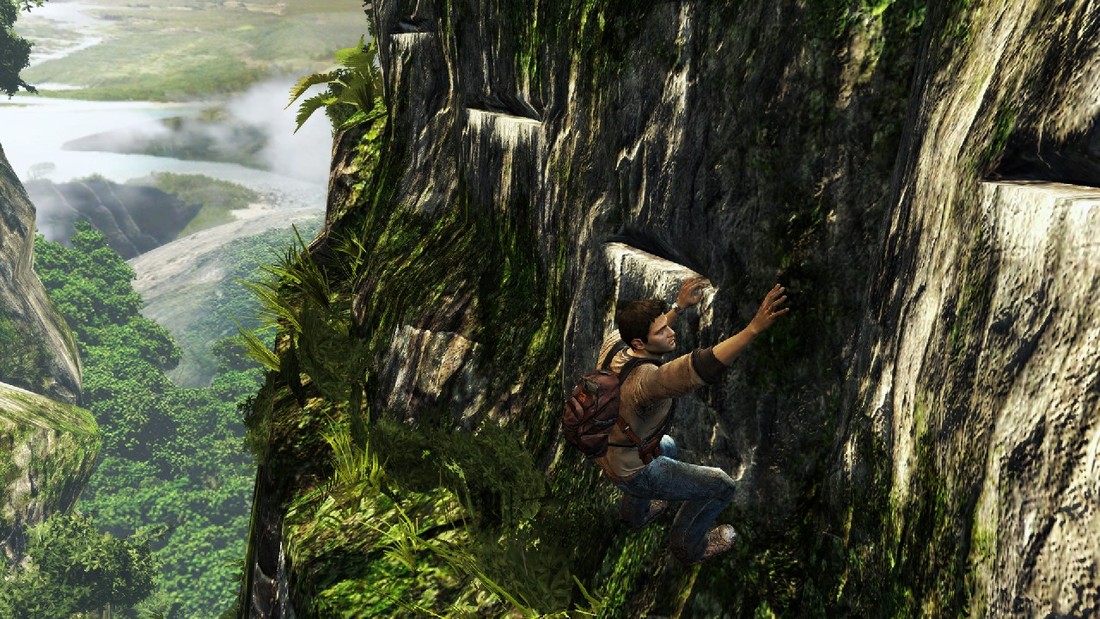 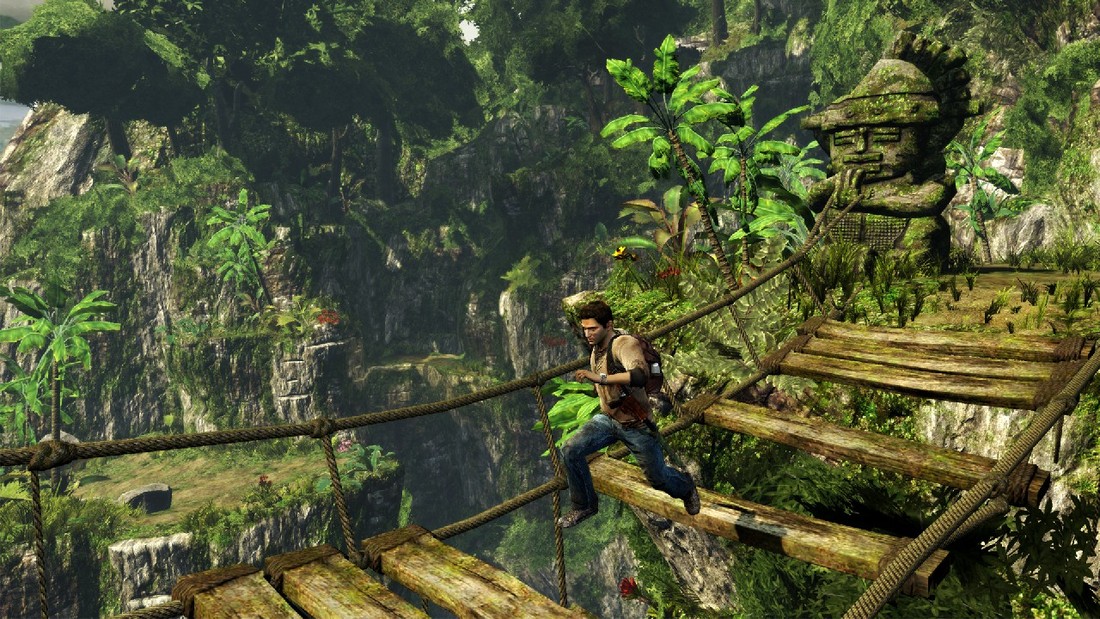 The Vita's gyroscope is also implemented with a deft touch. Aiming uses two analog sticks, but fine adjustments can be made tilting the device. If you find this off-putting - or you're trying to not look like a jackass as you play your new Vita on the subway - almost all of the gyroscopic features can be turned off. Software that launches alongside a new system often shoehorns new features in, so it's handy that Uncharted: The Golden Abyss lets players pick and choose how they want to play.

The auto-aim requires some consideration. The Vita may be a dual-analog stick device, but it's tiny nubs don't have the same sort of accuracy as a full-sized controller. They work for minor adjustments, but big sweeping movements feel like a struggle. The auto-aim takes that out of the equation, allowing lock-on toward the general vicinity of enemies while requiring you to make the shot on your own. I appreciated that The Golden Abyss accounted for those limitations.

For a moment, let's forget that this game is on a handheld. Let's say that instead of releasing on the Vita, The Golden Abyss was the latest PS3 installment of the Uncharted series. If that were the case, this would be the most forgettable entry in the series. It's vanilla. It's expected. It doesn't go for the triple deke. Hell, it doesn't even go for a single deke. It's checking all the boxes that make an Uncharted game as if it were an Excel document.

Despite that, I had a blast playing through it. The Uncharted formula, repeated now for the fourth time, never seems to get boring. Maybe it cues up the part of my brain that enjoys watching Crimson Tide ten times in a month, or maybe Sony has just found something that works and doesn't feel the need to mess with it. Either way, who doesn't like being the plucky action hero?

THE GOLDEN ABYSS ISN'T INNOVATIVE, BUT IT TRANSLATES THE UNCHARTED FEEL WELL

Having that time-tested gameplay on the train home rather than having to fight for control of the TV is a valuable asset, and The Golden Abyss translates the console feel over to a handheld incredibly well. Innovative it ain't but hey, all games can't be broccoli. There has to be some junk food thrown in there every once in a while.