Share All sharing options for: BioShock Infinite board game drops players into the middle of a floating civil war

In the upcoming tabletop game BioShock Infinite: The Siege of Columbia, players will take on the role of the Founders or the Vox Populi as they fight for control of the floating city of Columbia.

The board game, based in the universe of Irrational Games-developed video game BioShock Infinite, will come with 52 miniatures, cards, dice and a colorful gameboard, and is in development at tabletop game-makers Plaid Hat Games.

Colby Dauch, founder and chief game designer at Plaid Hat, told Polygon that the company was approached by Irrational about the idea of turning their video game into a tabletop game.

"Being big fans of the BioShock series, and what they had announced for Infinite so far, we were ecstatic to have a shot at working on a board game based in the world," Dauch said. After being contacted, the team "went out to Boston and showed them our ideas and signed a contract."

BioShock Infinite creative director Ken Levine was among the group they pitched their idea to. They later met with Levine to present the prototype of the game to him, a "hobby board game" inspired by the large-scale combat, dramatic backdrop and intriguing characters of the unique BioShock Infinite universe.

"Players will play as either the Founders or the Vox Populi and will build up an army to fight for control of Columbia by taking ground and completing important objectives," he said. "The whole while they'll be using their influence to sway various events that arise. They'll also find themselves having to deal with Booker and Elizabeth who are running around Columbia creating havoc."

"No one involved was interested in recreating the video game experience in a board game."

In the video game, players take on the role of Booker DeWitt, a former Pinkerton National Detective Agency, in an alternate-reality America in 1912. Booker is hired to find and rescue Elizabeth from the floating, corrupted city of Columbia. In the video game, Booker has to skirt the civil war raging between Columbia's Founders and the Vox Populi while trying to escape with Elizabeth, who has become central to the struggle.

It's a rich universe that inspired the table top game makers to craft a game that they believe touches on the core concepts their company was built upon. Chief among them is that the idea that a tabletop game has to be fun before anything else. That means that ultimately, no matter how interesting and innovative the game mechanisms are or how strategically sound it is, if it isn't "hitting" for them, they won't release it.

But it's not as simple as making the game fun. Plaid Hat also believes that their games have to create an opportunity for players to make interesting, engaging, and challenging decisions that affect the outcome of the game in their favor. So The Siege of Columbia isn't simply a role the dice and move your piece game.

"The game has you constantly weighing your options because they are critical to your success," Dauch said. "Do I risk riding the skyline to get to this critical position? Do I risk getting into combat with Booker? Should I use this card to influence this event? Which unit should I upgrade? Is it better to unlock this power or give this card a +1 to its combat value?" 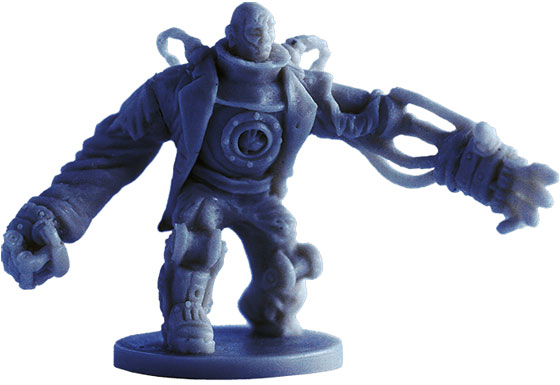 It was also important to Plaid Hat that The Siege of Columbia allow players to engage each other directly, not just go through the motions of gameplay without having any direct impact on each other's play.

"What is the point in coming together for game night if we are all going to put our heads down and play solitaire?" he said. "Bioshock Infinite: The Siege of Columbia has players combating one another, stealing objectives from one another, assassinating leaders, destroying strongholds, bidding against each other for control of unfolding events and more."

Plaid Hat was also careful not to just reskin one of their previous creations while making this one. The Siege of Columbia is completely unique, Dauch said. They also wanted to make sure they didn't just copy what happened in the video game. The end result is a table top game that takes place in the universe and timeline of BioShock Infinite, but offers players a different perspective.

"Much more wide lens, much more free form," he said. "No one involved was interested in recreating the video game experience in a board game. The video game is already going to do an amazing job of presenting that story and that experience. We are interested in creating another experience for fans of that universe."

"We set up the stage pieces and you fill the roles."

Irrational's games often have strong, surprising narratives. They tend to tell stories in interesting ways. I asked Dauch if he thought that his tabletop game could do the same thing.

"Video games have many storytelling tools at their disposal that table top games do not, but one thing that tabletop games do very well is emergent story telling," he said. "We set up the stage pieces and you fill the roles. In reality the video game is going to show you Booker making a daring leap from skyrail to skyrail as he dodges gunfire and blows up an airship (which is awesome). The board game is going to have you tactically playing cards and moving figures around a board (which sounds less awesome from a storytelling point of view), but it is the creativity the players lend to the experience that take that from a figure moving around a board, dice being rolled and cards being played and turn it into an epic plot twist. "

That way, Dauch said, the story can be different every time.

"In one game maybe the Founders captured Elizabeth but Booker took advantage of an assault by a Vox Populi airship on the Founder stronghold to get her back," he said. "In another game maybe there is a heated battle for critical control of a district and Songbird shows up just in time to give the Founders the edge they needed to drive out the Vox Populi. In another game when the threat of a skyline collapse looms the Vox Populi may recklessly throw all of their resources into influencing it's collapse, cutting off the Founders from an assault that could have won them the game, and holding on for a victory.

"We wanted to create a game where players add their collective energy and imagination to our game system to create memorable storytelling moments."