Share All sharing options for: Mass Effect 3 review: the sharp edge of hope

Review and information for Mass Effect 3

Mass Effect 3 is the fulfillment of a promise.

It seemed so simple six years ago when BioWare originally announced the series. Take the decisions from every game, make them matter, and make them carry over. The unspoken insinuation was that persistent consequences would lead to a fiction that resonated in ways that no game had really attempted before. BioWare wanted you to care about the things you did in each game, to consider them.

And now, six years later, we have the conclusion to that grand experiment. That little thing, persistence, has become a balancing act for BioWare between following through on demands of the existing Mass Effect audience, and leaving the series accessible to new players. The question now is, has BioWare managed to take the game they hope is the most accessible yet while keeping the promise they made in 2006?

The answer is yes. Mass Effect 3 is a triumph. But the culmination of BioWare's promise cuts deeply. 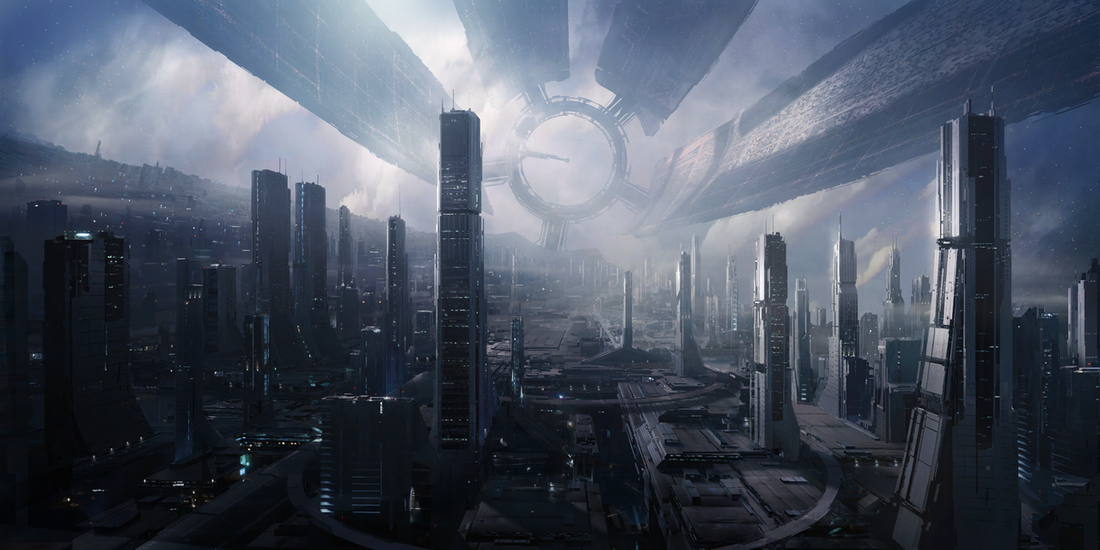 BioWare's desire to make Mass Effect 3 a more mainstream-friendly title is reflected most in the way it plays. For the first time, BioWare has created a shooter that more than measures up to the name. Mass Effect 3 is fluid, fast, and violent. It doesn't play like an RPG trying to look like a shooter, and it doesn't play like an RPG with shooter elements hammered into it, as with Mass Effect and Mass Effect 2 respectively. Where previously BioWare managed shooting that felt close-to-functional, and then serviceable, there's an elegance in Mass Effect 3's mixture of power-use, shooting, and squad commands.

BIOWARE HAS CREATED A SHOOTER THAT MEASURES UP TO THE NAME

You'll be aided in those battles by a renewed focus on found, customisable equipment (with a blessed minimum of inventory management). While the default weapons you find initially can serve you just fine throughout Mass Effect 3's campaign, it's nice to have the ability to tailor your gear to your particular wants and needs.

"I was lost without you" — Sam Hulick

There was some hand-wringing when it was learned that original Mass Effect series composer Jack Wall wasn't composing the score to Mass Effect 3. Wall's retro-space score evoked classic 70s science-fiction and gave Mass Effect and Mass Effect 2 distinctive soundscapes. However, as you can hear from the track above, Mass Effect 3 is in good hands with Sam Hulick, and Clint Mansell and Cris Velasco also makel strong contributions. There are quieter moments highlighted by tracks like "I was lost without you," but Mass Effect 3's score references Wall's work respectfully, while adding the appropriate level of epic orchestration.

But don't take my word for it — listen to the song while you read the review.

And vendors once again sell that equipment, giving more of a reason to explore the neutral spaces that provide some much needed breathing room from the horrors of the war with the Reapers, which is good, given the natural quest acquisition new to Mass Effect 3. As you wander the med-bay of the Citadel or the refugee-filled dock, you might hear a doctor speaking to a colleague about a shortage of alien-compatible medi-gel, or a turian general with chemical burns they can't treat. Sharp players may find solutions to these issues and be rewarded for their efforts.

The old means of assigning missions return — the N7 assignments, the requests from allies and acquaintances of more nebulous allegiances — but the new means of motivating players is a great way of integrating exploration for the sake of it and Mass Effect 3's objectives. It also grounds the world around you in the greater conflict.

All of this plays into the primary goal of amassing enough military resources and alien alliances to take the fight back to the Reapers. And that goal might be more or less difficult, depending on decisions you've made in the past. Even as I played through Mass Effect 2, there were insinuations of consequences from the first Mass Effect that weren't completely exposed or explored. They flitted through the story as sorts of echoes of repercussions. But they were spoken of in such a way that I worried about how those decisions and the decisions I made throughout Mass Effect 2 might play out in Mass Effect 3. 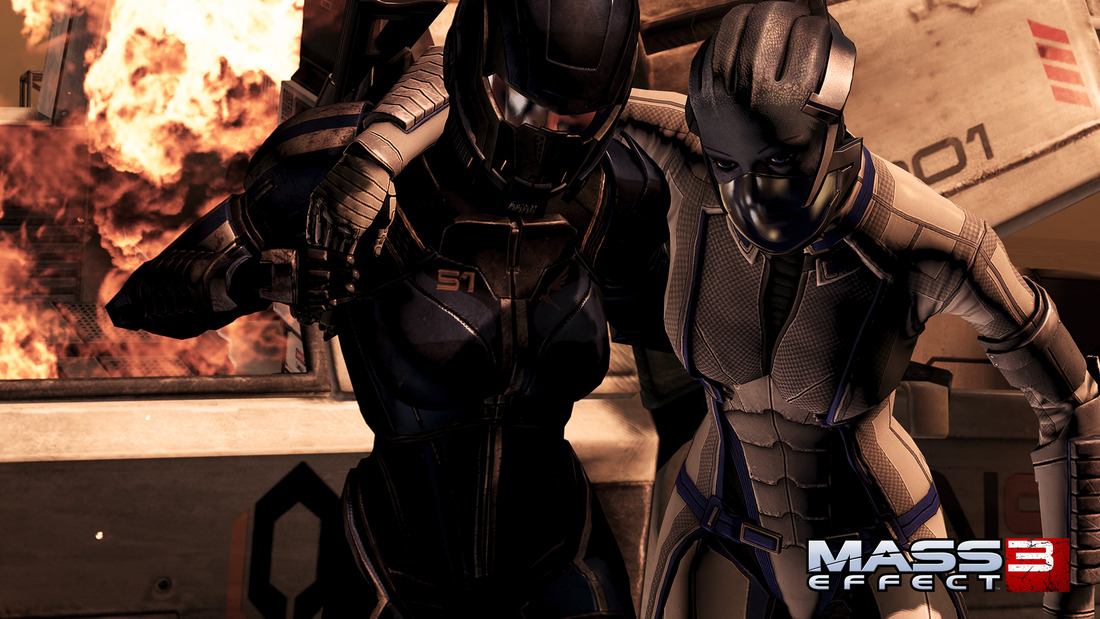 Unfortunately, EA and BioWare were not able to provide fully functional retail multiplayer servers in time for this review's publication. Sessions for reviewers were scheduled for Monday, March 4th, in able to be sure that the "review experience represents what consumers will experience on March 6th." As such, we didn't feel we were able to spend enough time with the multiplayer to provide an authoritative opinion on what it has to offer. That said, our score and review would stand as is even in the absence of any multiplayer modes at all, and our initial impression of multiplayer has been positive. The squad-based, objective oriented co-op with an emphasis on classes suits the fiction well, and the improved, fluid combat controls of the main game translate perfectly.

failure this time around means extinction

I was right to worry. The butterfly effect of choices large and small ripple through Mass Effect 3. A decision made in Mass Effect might lead to a situation that endangers the life of a crewmate that may or may not even have survived Mass Effect 2, or might make uneasy alliances between warring alien races even shakier. Decisions made about the Council in Mass Effect unfold in logical but unexpected ways in the wake of the Reaper invasion, as an example. The state of your crew from previous titles is a more immediate concern.

There's little time for taking care of your crew's baggage this time around. The serial narrative of personal drama woven around conflict that made up Mass Effect 2 is gone, for the most part. The stakes are too high, and failure this time around means extinction, not suicide. 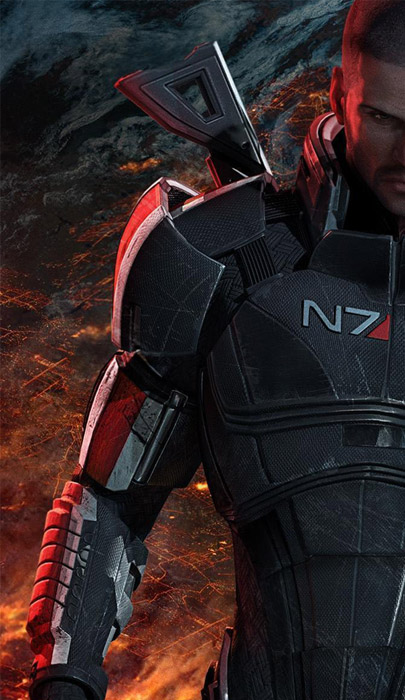 ...MORE NAMES ARE GOING ON THAT WALL
NO MATTER WHAT YOU DO... 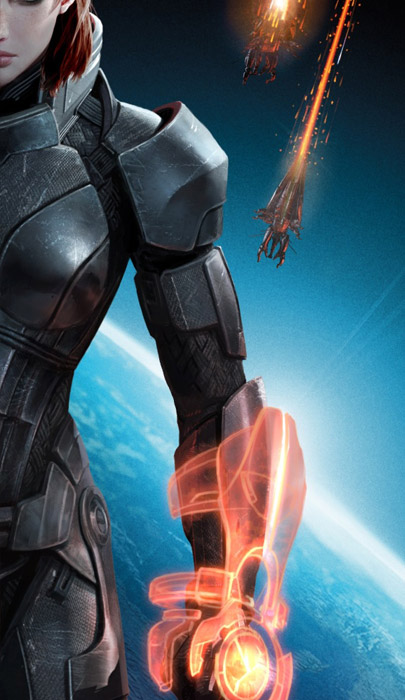 Mass Effect 3's biggest achievement is how much it felt like my experience. Events, consequences, repercussions — they all seemed wrapped neatly, believably around my decisions over the course of the entire Mass Effect trilogy.

There's a war memorial on the crew deck of the Normandy listing casualties incurred over the course of Shepard's years-long mission to avert galaxy-wide genocide. The names of crew lost in battle against Saren and Sovereign, in the appropriately named suicide mission through the Omega 4 relay, the Collector attack on the Normandy — they're all there.

But in Mass Effect, making all the right calls and all the right decisions could get you off with a minimum of blood on your hands — whichever crew member it belonged to — only one life sacrificed in the name of the greater good. In Mass Effect 2, playing it smart, playing it calm, playing it fully collected meant you could save just about everyone.

That is not the case in Mass Effect 3. BioWare aims to do damage. Decisions in Mass Effect 3 have less to do with which side to take in petty squabbles, or whether or not to take a mission. There are Paragon and Renegade options, but you're not deciding whether to play the part of bastard or boy scout.

Instead, Mass Effect 3 is about death. Most often, your decisions will play directly in who lives, and who dies, and what those deaths will ultimately mean — with casualties in either direction often numbering in the millions, or even billions. The greater good, in this case, is often about finding a solution that feels the least bad. 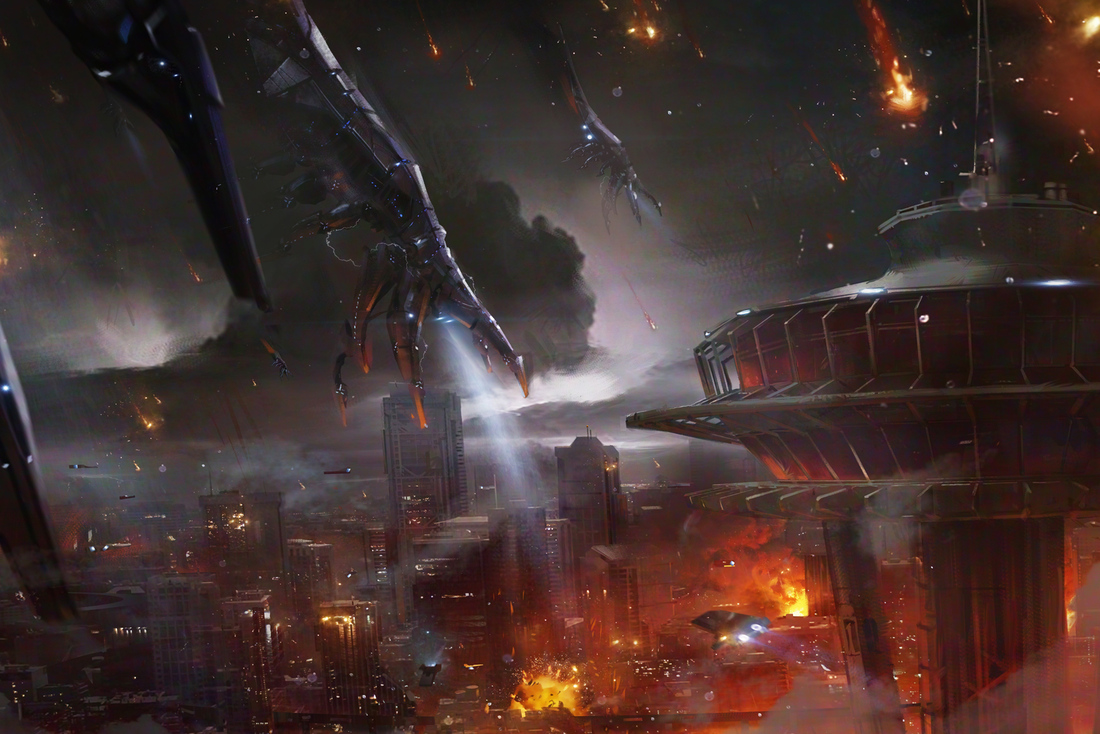 For the first time, a new Mass Effect title is available on all three HD platforms on release day, ostensibly meaning that everyone should be able to get in on the fun. Unfortunately, the PS3 still lacks the original Mass Effect due to publishing politics prior to BioWare's acquisition by EA in 2007. While BioWare released an interactive graphic novel of sorts to enable PS3 players to make major decisions from Mass Effect to export to Mass Effect 2, the comic lacks most of the context of Mass Effect proper, as well as a host of smaller decisions that manifest in various forms throughout Mass Effect 2 and Mass Effect 3.

If you have the option of playing all three Mass Effect titles in sequence, carrying your Shepard throughout, I can't encourage you enough to do so. But if that absolutely isn't an option, my brief time with the PS3 version of Mass Effect 3 didn't suggest any egregious technical issues. All versions of the game feature occasional scripting bugs that can hamper progress — we'd advise saving often, just in case.

Hope in Mass Effect 3 is the sharp edge of a knife, and BioWare wields that implement like a surgeon. You can save some friends, some societies. There are moments that will feel like victories. But it's crueler that not every death in Mass Effect 3 is guaranteed.

Sometimes death is quick, and sometimes you'll have time to grieve. But no matter what you do, no matter how many choices you make that boost your reputation as well as your Paragon or Renegade scores, more names are going on that wall on the Normandy crew deck. And if you've followed your Shepard from the beginning, or even picked up from Mass Effect 2, there are going to be characters you've grown to care about with their names engraved on that stone.

MASS EFFECT 3 IS AN UNPRECEDENTED EXPERIMENT IN GAME NARRATIVE, AND IN THE BEST POSSIBLE WAY, I'M GLAD TO HAVE SEEN IT THROUGH, AND TO SEE IT DONE

As a bombastic action-RPG with no previous context, Mass Effect 3 is a dark, engaging game with great combat, a well-written story, and all the epic space-opera you could want. But for those who have played through Mass Effect and Mass Effect 2, it's something much more.

While Mass Effect 2 was seditious in its discarding of RPG traditions like baggage in the interest of a more streamlined title, Mass Effect 3's revolution is simpler: a promise kept. As I approached the end, I felt melancholy, surrounded by characters that felt like friends that lived with the decisions I made, and the consequences of those decisions. BioWare promised to make choices matter with the Mass Effect series, and while the systems around those choices have gotten better and better, that main foundation has always been the primary draw. They built a world and a family out of decisions big and small, created a foundation to break my heart and pick it back up again, to make me care.

When the credits rolled, I felt finished. Mass Effect 3 is the culmination of an unprecedented experiment in game narrative, and in the best possible way, I'm glad to have seen it through, and to see it done.

Our review of Mass Effect 3 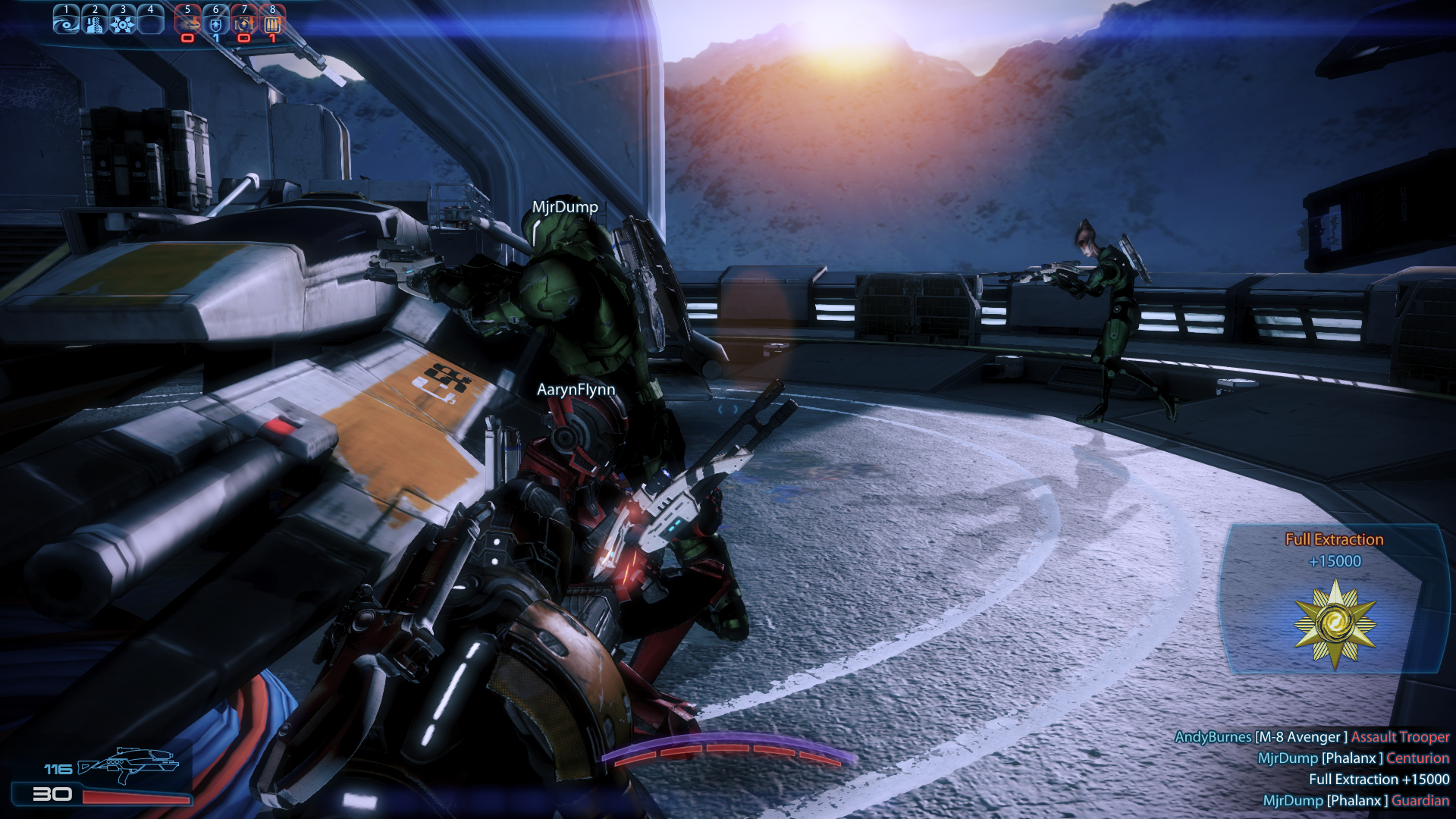