Despite some technical hiccups, Darksiders 2 keeps promises that the original couldn't manage.

Darksiders 2 signals a shift for developer Vigil Studios. For all its strengths - lengthy, captivating dungeons and a brutal hack-and-slash combat system with enough depth to set it above its competition - 2010's Darksidersdemonstrated the insecurity of a fledgling team's first release. Vigil proved capable of emulating mechanics borrowed from other games, but the full experience didn't gel into something remarkable.

Rather than follow up Darksiders with a rehash with new dungeons, Vigil has reimagined its very core, building in significant new RPG and platforming mechanics. With those additions, Darksiders 2 seems destined to be a studio-defining title. The influence of The Legend of Zeldaand God of War can still be felt, but the changes in Darksiders 2 demonstrate a new sense of confidence. A few problems keep Vigil from reaching from its loftiest ambitions, but Darksiders 2 strides self-assuredly in the right direction. 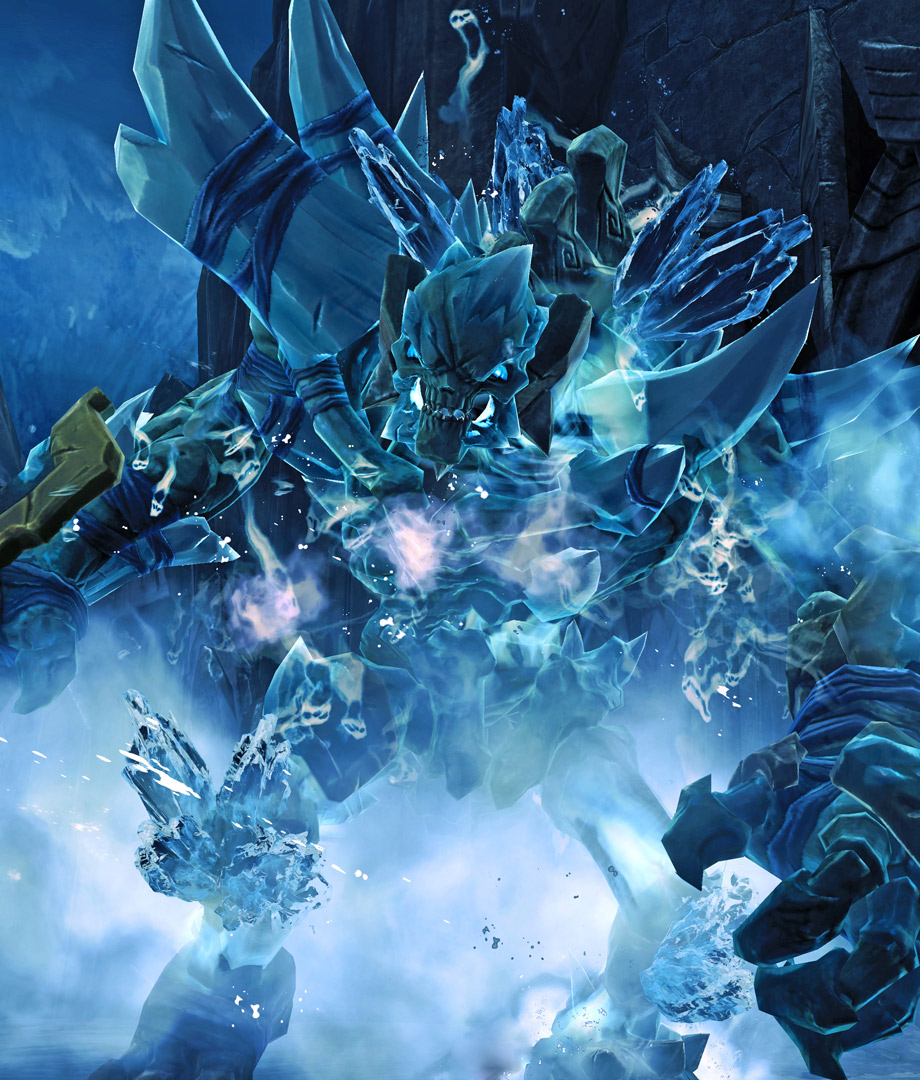 Jesper Kyd's excellent soundtrack for Darksiders 2 stands out by avoiding fantasy norms. Instead of the epic orchestral scores that are common in this genre, Kyd's layered tracks bend into unexpected directions that mirror Death's journey.

Each song conveys emotions beyond struggle and victory, arguably giving more life to the game than the actual narrative. Kyd's compositions lend Darksiders 2 a haunting undertone — just one more reason for the game to stick with you long after you've finished.

Darksiders 2 is positioned as a prequel, despite the numbering. The prologue to Darksiders saw War, one of the Four Horsemen, accused of starting the Apocalypse early, wiping out humanity in the process. In Darksiders 2, War's brother and fellow Horseman Death sets out on a quest to resurrect the human race and clear his brother's name — all of which takes place during War's 100-year stint in a purgatorial cosmic prison. 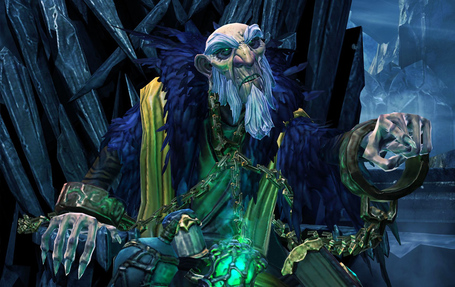 Darksiders 2's story arc is mired in generic fantasy contrivances — magical trees, a war between demons and angels, and a whole host of mystical MacGuffins to hunt down — but Vigil thrives while developing the details. By Darksiders 2's conclusion, those fantasy tropes have been transformed into a complex world of interconnected factions and realms — sometimes silly, but easy to invest in. 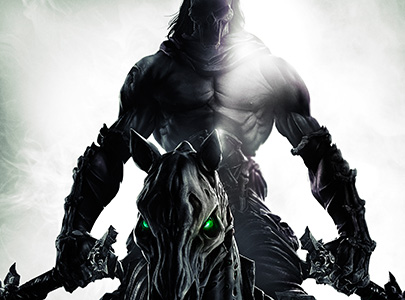 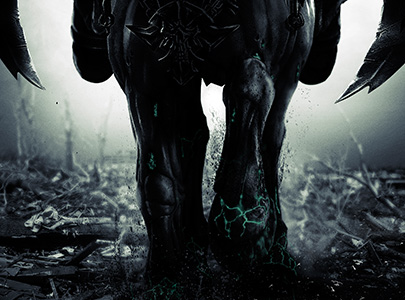 Much of this accomplishment owes to Darksiders 2's fluid world design. Huge fields blend naturally into ruins and caves. This urges exploration and makes dungeons seem like part of the environment instead of arbitrarily separated areas. The lack of artificial barriers between the outside world and puzzle-filled interior locations makes the sheer number of dungeons inDarksiders 2 easier to handle.

The main quest features around a dozen dungeons of varying sizes, and another half-dozen await curious players looking to sink even more hours into this giant game. And that's not counting occasional mini-dungeons that will challenge you to a single puzzle or platforming sequence while galloping between your primary goals.

What's truly impressive is the concentrated quality on display in all that dungeon design. Dungeons are layered and loop around on themselves in a way that pushes you in the right direction while maintaining a sense of scale and limiting downtime. Instead of endless hallways or a series of closed-off arena battles, virtually every room centers around one or two challenges - a puzzle to be solved with Death's expanding tool set or a Prince of Persia-style platforming segment that has Death scampering up the walls and showing off the game's beautiful animation work.

Even when dungeons don't hide a new tool for Death, they introduce one-off gimmicks such as lanterns that must be carried between statues to unlock doors or the ability to time travel to a past version of the dungeon. I wish Darksiders 2placed more new toys into Death's toolbox - only one isn't a repeat from the first game - but even with a familiar inventory, I was always challenged and satisfied with the brain-bending solutions. 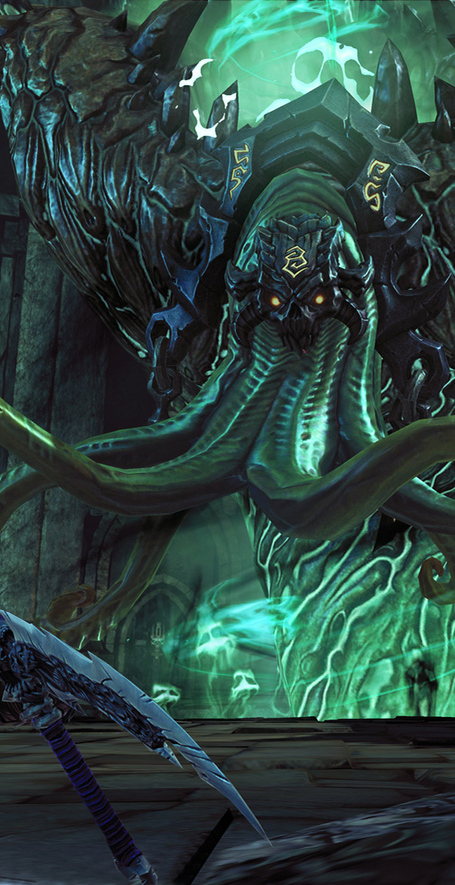 The high fantasy setting of Darksiders 2's first realm allows for familiar but distinct locales ranging from volcanoes to water-logged caves, but that variety disappears for a stretch in the middle. About eight hours into the game, Death journeys to the land of the dead, a lifeless gray expanse where every dungeon uses the same bones and cobwebs motif. Death's meager plot motivation is drained by a progression of "Collect three of these and return to me" story quests; I counted no less than three of these filler missions in a row.

While I wouldn't begrudge anyone for waning interest during this sluggish second act, the addition of strong RPG elements pushed me through into a great final stretch. Unlike War, Death is able to level up and swap out a huge assortment of armor pieces and weapons.Darksiders 2's loot system never reaches the complexity or satisfaction of Diablo 3, but it's full of clever hooks, such as "possessed" weapons that can be fed other items to power them up. 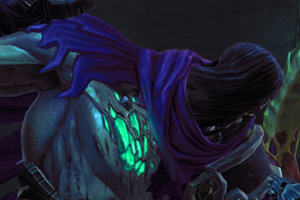 A steady stream of upgrades kept me engaged in Death's journey despite infrequent disruptive snags. Darksiders 2's technology isn't nearly as reliable as its game design. Even when installed on the Xbox 360 version, Darksiders 2occasionally pauses to load in new areas, sometimes at inexplicable times, like in the middle of a jump. I hit one bug where a major quest giver wouldn't respond to Death's arrival in the area, which left me wondering if I'd even be able to finish the game - a reset fixed that one. The game even locked up my console entirely on the final cutscene as it struggled to award three achievements at once.

When looked at as a list, those bugs and glitches seem damning, but spread across the 20 to 30 hours that Darksiders 2 lasts, they had minimal impact on my enjoyment. If you viewed the first Darksiders' borrowed gameplay beats as a potential sign of laziness from Vigil Studios, Darksiders 2 provides hearty evidence of a team with genuine skill and ambition. It doesn't always nail the pacing or polish, but Darksiders 2 adds so many valuable ideas to the series that a path to its future seems clear for the first time. For Darksiders, Death brings a much-needed spark of life.