Share All sharing options for: Call of Duty Elite becoming entirely free, DLC sold solo or as a Season Pass

Acknowledging that the Call of Duty Elite premium service divided the platform's player community, Activision is making it entirely free with Black Ops 2

Activision has announced that the previously subscription-based elements of Call of Duty Elite will be free with the release of Call of Duty: Black Ops 2, while downloadable content for the game will be sold separately, via both a discounted "Season Pass" for $49.99 or á la carte as "Map Packs," four of which will be available for $15 each. Like previous Call of Duty DLC, the Black Ops 2 maps will be available on Xbox Live first, starting in 2013.

When the first iteration of Elite launched last year alongside Modern Warfare 3, there was confusion over the paid versus free aspects of the service. Activision VP of Digital Jamie Berger told me then that he was "not at all surprised that we either weren't clear on some points or people were confused." While the basic service itself was free for everyone — including the Career section, which included personal stats, leaderboards, and heatmaps — not all of Elite's features were available to non-subscribers.

A $50 subscription bought access to features like Clans and video uploads, but the bulk of that subscription bought access to the entirety of the game's monthly DLC releases. Players who have already spent $50 on an annual Elite subscription won't be eligible for any of the Black Ops 2 DLC content. Activision CEO Eric Hirshberg tells Polygon, "The Elite Premium subscription was for the MW3 season of content" which included "an unprecedented 29 pieces of playable content so no matter when someone started their membership, they got more than their money's worth."

The change is aimed, at least in part, on remedying that earlier confusion. "What we have realized is that several of the Call of Duty Elite services which are currently only available to our premium members for Call of Duty: Modern Warfare 3 are things that would further unite, engage and delight our player community," Activision CEO Eric Hirshberg said in a press release accompanying the announcement. "So we're going to make them free for Call of Duty: Black Ops 2."

As a web platform, Call of Duty Elite promised regular iteration and evolution. While it's unlikely that Black Ops 2 will deviate much from MW3's use of the service, Elite will now include the ability to customize your classes using the game's new "Pick 10 Create-a-Class" system as well as the ability to "track your Zombies personal statistics and compare it to other players' around the world." The Call of Duty Elite TV service will also support tablet playback when Black Ops 2 is released, a curious omission thus far.

Some of Black Ops' Zombies maps proved quite memorable, such as the George A. Romero-themed "Call of the Dead" — featuring the likenesses of Danny Trejo, Sarah Michelle Gellar, Robert Englund, Michael Rooker and Romero himself — as well as the zero-gravity mayhem of "Moon." 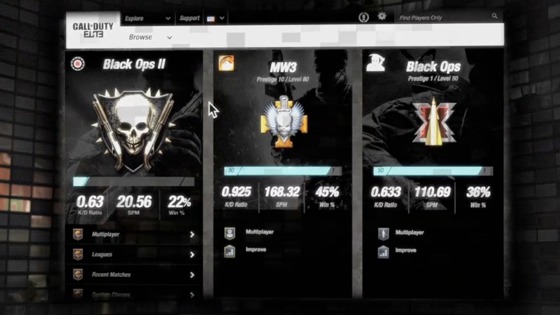 By comparison, the following year's Elite-powered Modern Warfare 3 release schedule focused on more regular releases, as seen on the service's "Content Calendar," a nine-month-long trickle of 28 pieces of content, from multiplayer maps to Special Ops missions to Face Off maps to entirely new game modes. When asked if the pace was a challenge when promoting the MW3 content, Hirshberg told Polygon, "Of course. But that is really a subset of the larger driver here which is this: Call of Duty is at its best when our community is united."

From a consumer standpoint, one of the most confusing aspects of Call of Duty Elite as originally envisioned was the Xbox Live timed exclusivity, which meant that PlayStation 3-owning premium members were given access to the service's paid services but still had to wait to access the DLC. By reverting to a split model, where Elite is distinct from the DLC, it puts all players back on an equal footing with regards to the Elite service. However, as before, Xbox 360 players will get first crack at the DLC.

Call of Duty players may remember the difficulty Activision had in keeping Elite running when it first launched last year. Call of Duty VP of Production Daniel Suarez told me last year, "We knew MW3 was going to be big and we planned for a big demand, it's just the infrastructure is struggling to keep up with volume."

For this outing, I asked Hirshberg if Beachhead Studios — the team tasked with building and maintaing Elite — has grown. "The Beachhead staff has actually grown," Hirshberg said. "And now that [Call of Duty Elite] will be free to a much larger audience for Black Ops 2, we also needed to beef up our back end infrastructure as well." With preorder numbers indicating a bigger launch for Black Ops 2 than last year's Modern Warfare 3, one hopes that Activision is better prepared this year.

If you're curious about whether or not Call of Duty Elite and the entire season of DLC will be available on Wii U as well, Activision CEO Eric Hirshberg tells us, "That's our goal, but the honest answer here [...] is that we're still working out the details with Nintendo."