Beenox's The Amazing Spider-Man nails the feel of being superhuman, but stumbles in finding a challenge fit for a superhero.

I would never want to make a superhero game.

Take The Amazing Spider-Man, the new Beenox effort based on the upcoming cinematic reboot, for instance. First you have to provide the feeling of being the beloved wall-crawler, spinning webs any size, et cetera. Then you have to design a realistic challenge for a guy who has pretty much always emerged victorious for the past 50 years or so.

With its third pass at Spider-Man, Beenox has nailed the simulation part in a way unrivaled since Shaba Games had its shot with Web of Shadows in 2008. But the fun begins to wear a little thin when you realize that in the world of The Amazing Spider-Man, with great power comes a great reason not to work too hard.

For the first Spidey movie tie-in since 2007's dismal Spider-Man 3, publisher Activision has returned to a freely explorable Manhattan (though the virtual borough is a far cry geographically from its real-world counterpart). The thrill so notably absent from Beenox's last two Spidey outings, the thrill of flinging yourself between skyscrapers, tossing out a web when you're inches from the ground and gliding back into the air makes a welcome return in The Amazing Spider-Man.

Though The Amazing Spider-Man's swinging has been dumbed down since Web of Shadows (see sidebar) it's at least been beautifully animated. Spider-Man pirouettes and flips through the air with a genuinely exhilarating sense of abandon. Motion blur sells those trademark moments where the Webslinger's gliding close enough to the sidewalk to come away with chewing gum on his tights.

There are so many trademark little touches that heighten the Spider-Man-osity of getting around town. As he sprints up the side of a building, Spidey shoots tiny lines of webbing ahead of himself to help maintain his momentum and balance. When falling at terminal velocity, a last minute web is automatically spun to the sky that prevents him from becoming spider tartare.

The Amazing Spider-Man's attention to detail carries over to the lucha libre-inspired combat, which captures the fluidity and grace you'd expect from a hero who can always sense the next move his enemy is going to make. Much like web-swinging, fighting looks fantastic, but it also has the gameplay substance to back it up. This is no button mash - choosing the right moments to dodge, immobilize enemies with webbing or use a melee attack to take out a lone gunner is key. 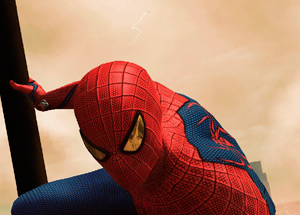 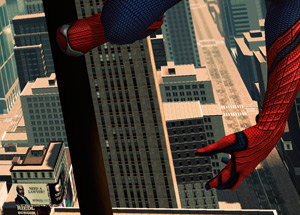 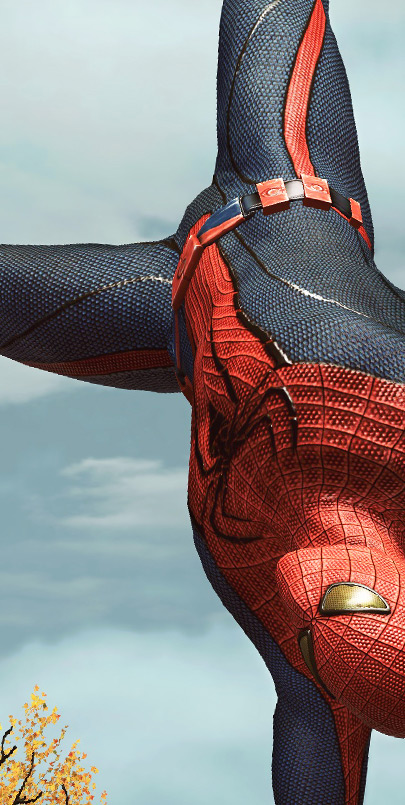 It's also important to know when to head for the shadows.
In a move clearly inspired by Rocksteady's Batman games, Spidey has some stealthy options at his disposal. Hover above an unaware enemy and with a button press you can zip to the ground, wrap him in a cocoon and stick him to the ceiling. It's a helpful way of even the odds, but the novelty quickly fades if you use it to excess and methodically eliminate an entire room with stealth. You can temper that effect by using a little restraint and leaping headlong into fisticuffs more frequently - it'd just be nice if the game itself gave you a reason to. 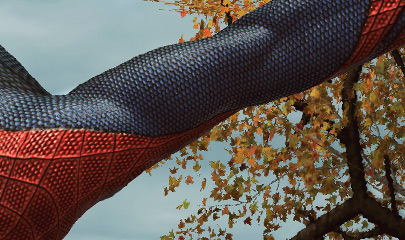 This is when The Amazing Spider-Man runs into problems, the moments when it's trying to balance the feeling of being superhuman with the challenge that makes playing any game rewarding. The open-world side quests are the most egregious examples: I completed them all - every race, every car chase, every mugging - and there wasn't a single one I failed to complete on the very first try.
The lamest example: The virus at the center of The Amazing Spider-Man's story is infecting citizens around the city. Spidey is rewarded with experience for returning these citizens to a hospital, but there's no timer, no penalty for jostling them too much. The only way one of these missions can possibly resolve is with success. That's not a sidequest, it's a chore. 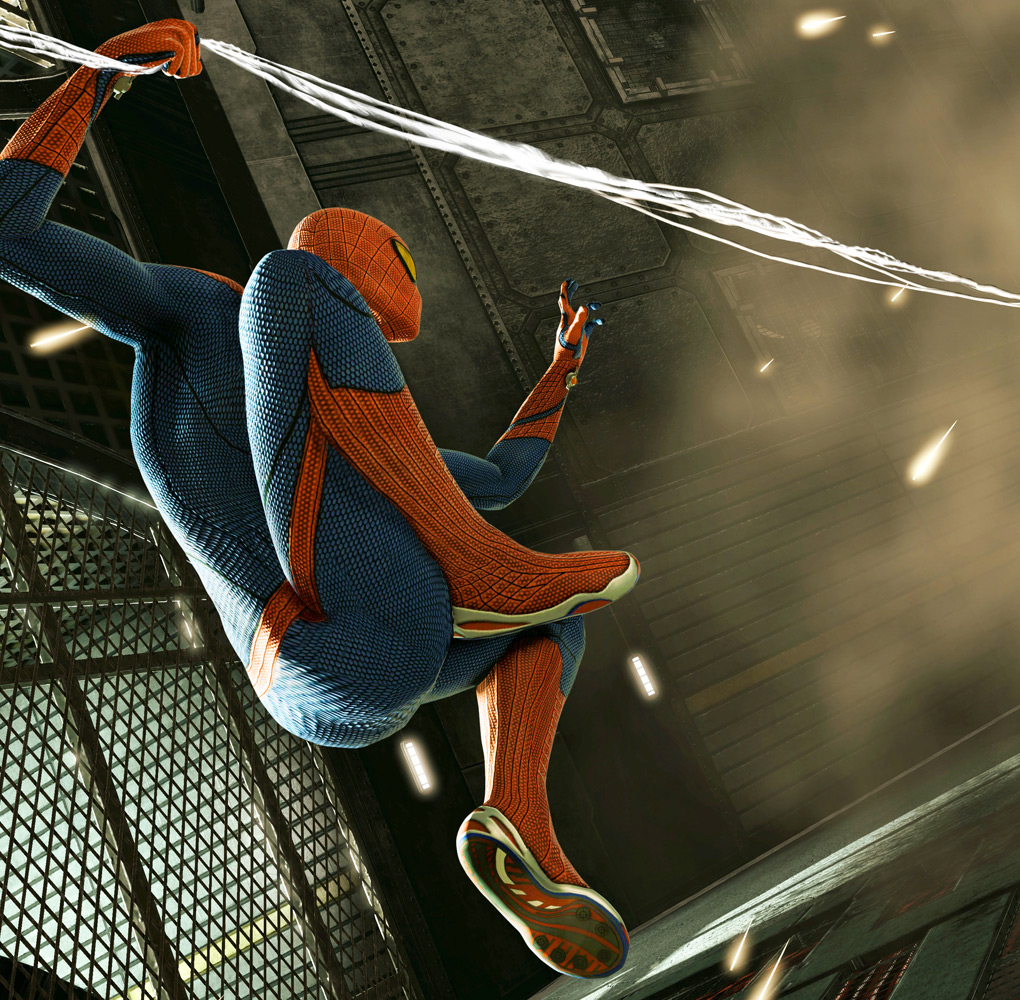 A BRIEF HISTORY OF SWING

In most of Shaba and Treyarch's open-world Spidey games, webs were anchored to physical objects in the environment, altering the trajectory of his swing. It provided more control, but also required more skill from the player to keep from slamming his wall-crawler avatar into things. In The Amazing Spider-Man, Beenox has taken a page from Treyarch's Ultimate Spider-Man and unmoored webs from any relation to the environment, instead always using them to move the player forward.

Web-swinging isn't completely automatic - you can still build speed by letting go of the web at just the right moment - but it's a pretty big step backwards in terms of control fidelity. It feels a little like playing with training wheels, and I wish there'd been an option to enable more flexible controls.

Also, I know this is like, the nerdiest sidebar ever written, but you read it all the way to the end so what does that make you?

Then there's the web rush, which lets Spider-Man slow down time and aim at a specific point in the environment. Spidey then travels to the point automatically as he finds the coolest path across parked cars, along the tops of billboards and what have you. Again, it looks great and gives a good feeling of power the first few dozen times you use it, but that veneer peels away when you realize how small of a role you play in this acrobatic display. 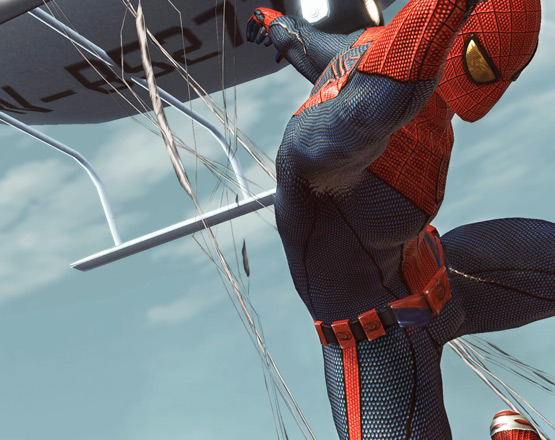 Boss encounters with some familiar Spidey foes and some massive mechanical threats hide behind similarly thin gameplay, thanks to their reliance on quick-time events, but at least they're over before the considerable thrill of their scale and spectacle can fade.
I was left with a similarly positive impression from the story, set after the events of the upcoming film. It's not groundbreaking and none of the film's performers voice their characters, but it's far more competently told than you'd expect from a movie-based game, and it provides a more natural way to work in Spidey's rogues gallery than the imaginary "bad guy convention" that our hero has quipped about in basically every game he's ever appeared in. (A note about the story: It spoils some plot points for the film so if you're worried about that sort of thing, hold off.)

The actually-pretty-decent story makes the flat, frequently recycled systemic dialogue in the open world all the more painful. This open-world fatigue happens more often the more you explore Beenox's Manhattan.
Take collectables for instance. In his travels, Spidey can find loose pages to unlock complete comics you can read from the main menu. Neat, right? But wait a tick: Unlocking those 10 comics will require finding five-hundred script pages, and there are 200 more if you want the achievement for getting them all. Yes: There are 700 script pages scattered throughout the city. I don't know what number triggers the antibodies that crush my biological desire to "collect ‘em all," but it's now scientifically proven to be "under 700." 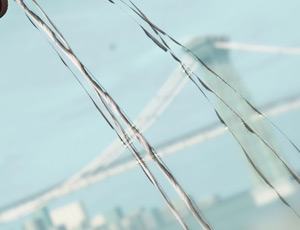 I'm teasing, but only because there is real potential on display in The Amazing Spider-Man, even if the developer doesn't quite know how to stop once it gets in a groove. The stumbling block with most superhero games is understanding and harnessing that essential bit of magic that imparts the feeling of living in the hero's tights and Beenox has somersaulted right over that hurdle effortlessly. If the studio gets another crack at the Webslinger, here's hoping it manages to maintain that feeling for an entire game.