Share All sharing options for: The Art of the Assassin exhibit showcases the reflective power of Assassin's Creed 3's hero

Everyone in the painting is running in the same direction. Except one figure, walking the opposite way.

American Revolutionary soldiers, clad in blue, trampling fallen British soldiers with coats as red as the bloody footprints in the snow, running like hell towards waiting conflict. Muskets at the ready, mouths open in silent cries of valor. Behind one soldier flies the American flag, it's blue and red and white obscuring the upper half of a lone figure making his quiet exit with tomahawk in hand.

Connor, the unsung hero of the American Revolution, star of Ubisoft's Assassin's Creed 3.

The painting hangs in a gallery in a bustling little corner of New York City. The walls, floor, ceiling, everything is white, reminding me of the series' infamous Animus. The blinding brightness is punctuated by the artwork on the walls, all shouting one common theme: Connor.

The Art of the Assassin exhibition has been set up in tandem with Rock the Vote, an organization focused on bringing young people into the political loop. Ubisoft chose to partner with the program due to its similarities and themes with Assassin's Creed 3.

The American Revolution was a time where people wanted their voices heard. Rock the Vote seeks to empower young people, encouraging them to take part in the political process. And as a visually emotive franchise Assassin's Creed has already inspired everything from fan artwork to parkour videos. The marriage of these two ideas, the themes of Assassin's Creed and art, seemed a perfect fit.

The exhibition has been touring the United States, picking up over 20 pieces of artwork from numerous artists along the way.

One picture, drawn in a Japanese anime-style, depicts Connor on a field of blood, torn fabric and discarded weapons littering the snow behind him. Connor is kneeling as if in prayer, his eyes downcast. Another is drawn in the style of the Revolution's infamous "Join or Die" snake comic, showing cartoonish versions of Connor and three Redcoats. Connor is brutally stabbing his enemies, who stand listlessly as their blood spouts from every orifice. 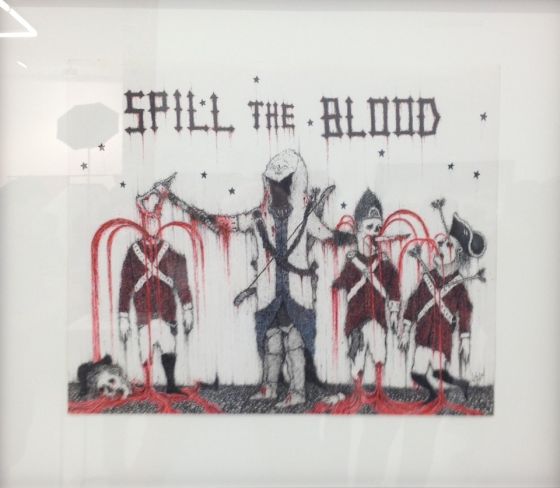 Arist Andrew "Artek" Thiele, who has been hooked on the series since diving into Brotherhood, says the themes of Assassin's Creed lend themselves well to other forms of art.

"It was a good mesh," he said. "I love what the games stand for and what it is now."

Specifically for Assassin's Creed 3, Thiele believes that the themes surrounding Connor are universal, a compelling mix of strength and determination.

"Connor is everywhere," he said. "Connor represents everything there, he represents the whole purpose of Assassin's Creed."

Thiele leads me to two paintings styled to look like old Western "Wanted" posters. Both show Connor in stances of power, his gaze obscured by the infamous Assassin's hood, every last detail seared into the canvas with striking black ink. The posters are covered in red splotches, symbolizing the blood Connor has spilled to achieve his goals.

"You can't help but root for Connor. He's that guy you just want to roll with."

"Connor doesn't represent good or bad, he represents the people and things he personally believes in," Thiele said. "That's what voting is about: doing what you believe in and standing up for it. His whole purpose is to be there for what he thinks is right and fight so other people can do what they think is right."

Connor represents every small person and every small deed gone unsung from the American Revolution, says Thiele. He is the revolution, if you think about it that way: the one small force that riled a big change.

"You can't help but root for Connor," Thiele said. "He's that guy you just want to roll with."

Connor's unique heritage blended with the Revolutionary War setting is something artists "really dig," a representative for Ubisoft told me. The Revolutionary War and colonial America are settings that haven't been touched too heavily in entertainment; everything these days is time-travelling aliens and magical, sparkling vampires. The Revolution heralded the birth of a country, something that Americans can identify with, and liberty and freedom are ideas everyone can cling to.

The last painting is simply a streak of blood in the snow, a handful of wolves prowling the periphery. One wolf stares at the viewer with eyes that say, "He did this." A discarded dagger lays in the snow beside the frozen bloody mess.

As an American, I can feel the sense of ownership that comes with setting Assassin's Creed 3 in my homeland. The Revolution forced the colonies to step outside that self-enclosed circle, culminating in an historical moment that redefined "liberty."

The Art of the Assassin tour has one more stop in Los Angeles, coinciding with the game's launch at the end of this month. Ubisoft will auction off the artwork, taking bids both on-site and over the internet, and will donate all proceeds to Rock the Vote.