The Walking Dead: Episode 4 continues to demonstrate the possibility of serialized games, but the limits of the medium are more obvious than ever.

At this point, I hope you've already taken my advice and tucked into Telltale's The Walking Dead. Even before this fourth and penultimate episode, "Around Every Corner", it was already one of the best stories told in a video game, not to mention the best implementation ever of episodic structure in gaming.

So if you're looking for buying advice, let me get that out of the way. Buy it. Buy it all, buy it hard. Buy it for loved ones as a last-minute stocking stuffer, buy it for someone that has never played a video game. Just buy it. Repeatedly.

With that out of the way, I'd like to examine the blueprint Telltale has laid out here for how to approach interactive narrative. We're one episode away from the end of this "season" if you will, and though it's still as brilliant as ever, it's been interesting watching the limitations of the format start to show.

"Around Every Corner" takes you to the streets of Savannah as our motley band of survivors (lead by the player's avatar, Lee) looks for a boat that they can use to escape the zombie apocalypse that's claimed pretty much everyone they know and love.
This was already a pretty emotionally grueling journey, but as our heroes encounter a new group of "survivors" of a different sort and hear tales of the ruthless colony that exiled them, things are more grim than ever. 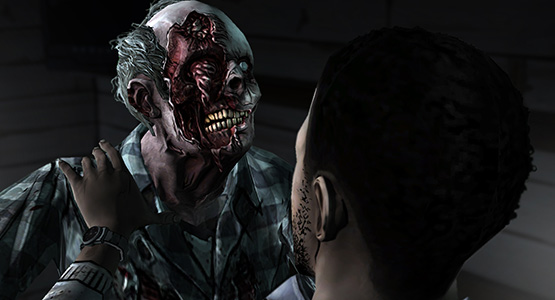 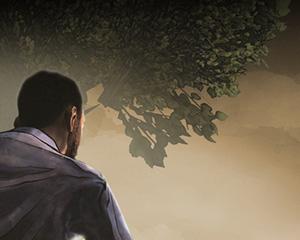 EPISODE 4 IS A SERIES OF GHOULISH CHOICES 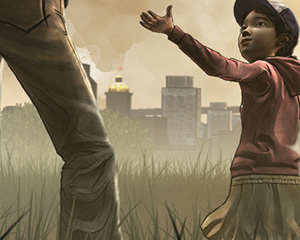 Episode Three's unsuccessful action sequences aren't repeated here - the closest you'll get is a couple of extended shooting galleries, which Walking Dead's limited controls are well suited to. (This is especially true if you know that that right trigger can be used to fire, though it's not indicated on screen.)

No, most of Walking Dead's gameplay is a series of choices. Terrible, ghoulish choices to which there is no right answer. "Around Every Corner" contains possibly the most unnerving scene to date, unthinkable as that may be to those who've made it this far with the series. This brings us to the first of Walking Dead's inherent problems.

At this point, former teacher and escaped convict Lee has done some terrible, terrible things, often in service of protecting his young ward, Clementine. Other characters have been through hell too, but they're able to shut down, freak out or any number of other perfectly believable reactions to being thrust into the middle of The Worst Thing Ever.

Lee, however, is granted no such luxury. As the player's agent in the world, he must always move forward, always remain grounded enough that the player still feels themselves in full control of the situation. Add this dissonance to the fact that a few odd dialog choices by the player can unintentionally make Lee seem a little schizophrenic and you've got a recipe for a lead character that's often hard to relate to, despite Dave Fennoy's wonderful performance and Book of Eli scribe Gary Whitta's spot-on dialog.

This is especially problematic when the player has to choose between forcing Lee to do something horrible but presented as necessary, or putting the burden on a party member. Since Lee can't manifest the toll the action will take on him in any meaningful way without the players permission, he becomes something of an void that can conveniently store more than a fair share of turmoil.

"Around Every Corner" features just such a scene between Lee and father Kenny. One of them must do the unthinkable to a zombie they encounter, but the absence any emotional toll for Lee meant I didn't really have to think at all.

This episode of the Walking Dead is even more at the mercy of problems inherent to the game's Choose Your Own Misadventure structure.

The player is given an unprecedented amount of control over how the story of Walking Dead unfolds. Let's put it this way: At the end of "Around Every Corner," you find out how many players will be entering the final episode with the same crew as yourself, and there are a lot of different ways it could shake out depending on your choices throughout the game.

I felt robbed of the repercussions of those choices by The Walking Dead's ever-growing body count, though. By the end ofEpisode Four, many of the game's most interesting characters have been killed. It's not just that it makes the story less compelling (akin to watching your favorite team after the star pitcher, catcher, shortstop and much of the outfield have been traded away). It's that tough decisions are often emotional red herrings, as the companion whose trust you stand to lose can die before the bill for your betrayal comes due.

Turning your back on friends is a lot easier when you're reasonably sure they're going to be zombie food soon anyway.

Maybe that's the uncomfortable mindset Telltale wants to push you into, a heartless tactician for whom life or death choices are all but predetermined, but it made it hard to connect to new, less interesting characters when all I could think about were the shoes of the more interesting fallen friends that they're filling.

THE WALKING DEAD IS DOING AMAZING THINGS, BUT IT'S PAINTED INTO A CORNER

Make no mistake: Telltale has done some amazing things with The Walking Dead, and one episode away from the end it's already a landmark moment in interactive storytelling. I'm just hopeful that with the next series of episodes, the studio is able escape the corners that its experiment with malleable narrative has painted it into.