Some of those changes seem less jarring when you look at Forza Horizon's pedigree. Main Forza studio Turn 10 provided back-up, but Horizon was primarily developed by Playground Games, a new team made up of ex-developers from a variety of U.K. racing studios, including Bizarre Creations. Horizon's focus on style and stunts is lifted directly from Bizarre's defunct Project Gotham Racing.

That's good news if you've missed earning points for performing crazy feats out on the open road. It's also at odds with what made previous Forza games so special. WhereForza Motorsport 4 revered cars above all else, Horizon is all about car culture - specifically the techno-thumping, street racing culture of movies like The Fast and the Furious.

Horizon feels just like one of those adrenaline-filled Hollywood car movies: It's flashy and fun, but also shallow and more than a little cynical.

Forza Horizon's first race depicts a desperate rush to win a spot in the Horizon Festival, a series of races and showcases across a huge stretch of Colorado roads. While that introductory race isn't tough, you start at the very bottom of the pack, ranked 250 out of 250 and with only a handful of beginner events available.

Forza Horizon's first 20 minutes threaten a much more story-driven racing experience than the full game delivers. I found the party atmosphere of the Horizon Festival off-putting, but the goofy portrayals of characters like wise-cracking middle-aged mechanic Dak and cocky long-time champion Darius Flynt have a glint of potential. These characters are only featured in a few cutscenes near the start of the game, and Playground Games misses out on a great opportunity to inject life into Horizon by not committing to them more.

On the other hand, plot is the least worrisome thing to fumble in a racing game. Horizon gets the feel of the cars right by borrowing heavily from its namesake. Cars handle how they should based on size and power, as well as the type of track. Test driving each new vehicle is a great experience.

Though the cars look and control great, Horizon's visuals take a huge step back from Forza Motorsport 4's stunning graphics. The Forza series has always prided itself on being amongst the best-looking games on any console, but Horizon takes a hit by virtue of its human presence. Plastic characters in cutscenes are forgivable, but they also fill out the sidelines for many of the races, detracting from the vast, beautiful landscapes ofHorizon's virtual Colorado.

I noticed the visual hit immediately, but it takes longer to pick up on the concessions that Forza Horizon makes to feel like an arcade racer. Drifts are easier, crashes are easier to recover from, and you can scrape against other cars at high speeds without losing control and spinning out. These tweaks fit the setting, but races are often unpredictable messes.

HORIZON MAKES CONCESSIONS TO FEEL LIKE AN ARCADE RACER. 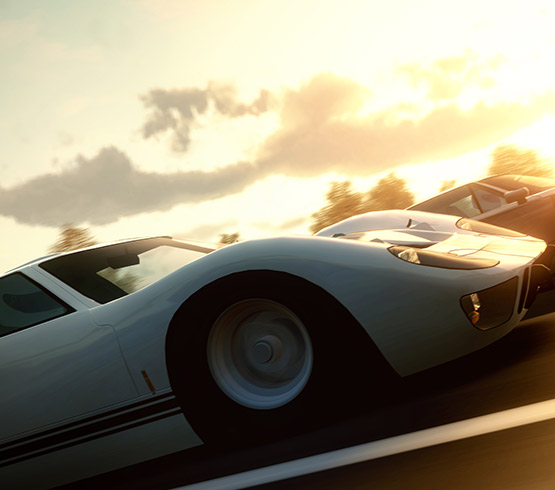 Most of Forza Horizon's 100-plus events are lap-based or point-to-point races. The flow of new cars and opponents is fun and exhilarating at the start, but Horizon tries some cheap tricks to keep players engaged. After around 30 races, the difficulty spikes like crazy. With no warning or discernible reason, I went from a painless first-place finish every race to struggling to keep up with the pack. After several losses, I realized that my opponents were suddenly driving faster than I could reasonably catch up to.

This artificial AI speed boost reveals Horizon's misstep: Mixing the frame of a driving sim with the chassis of an arcade racer doesn't work very well. In most arcade racing games, falling behind means that you need to take advantage of something at your disposal beyond your regular vehicle to win - use your boost at the right time, fire off a rocket at the rival who's causing you trouble, etc. 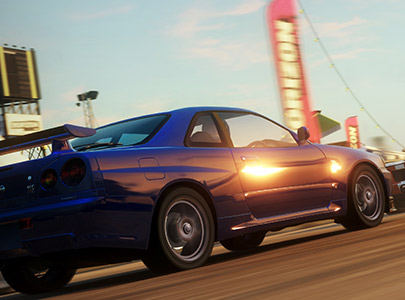 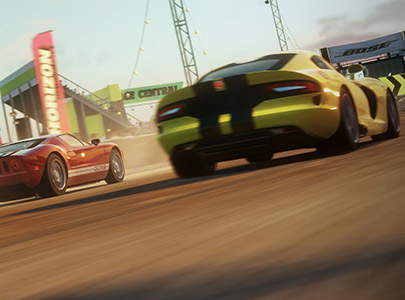 Horizon has all the arcade difficulty bumps without providing any reasonable strategies for players to overcome them. If you fall a certain amount behind first place within the first minute of a race, you're better off restarting than spinning your wheels in a futile attempt to catch up; no matter how perfectly you round each corner and blast through each straight-away, you're not going to win.
In many of the later races I eked out victories through questionable methods, like slamming into opponents as they rounded corners. In previous Forza games, the ability to rewind during races operated as a precision tool to let me re-do difficult segments of a track. In Horizon, it's a crutch, something I had to rely on over and over in every race, every time I made the tiniest mistake, just to give myself a fighting chance. 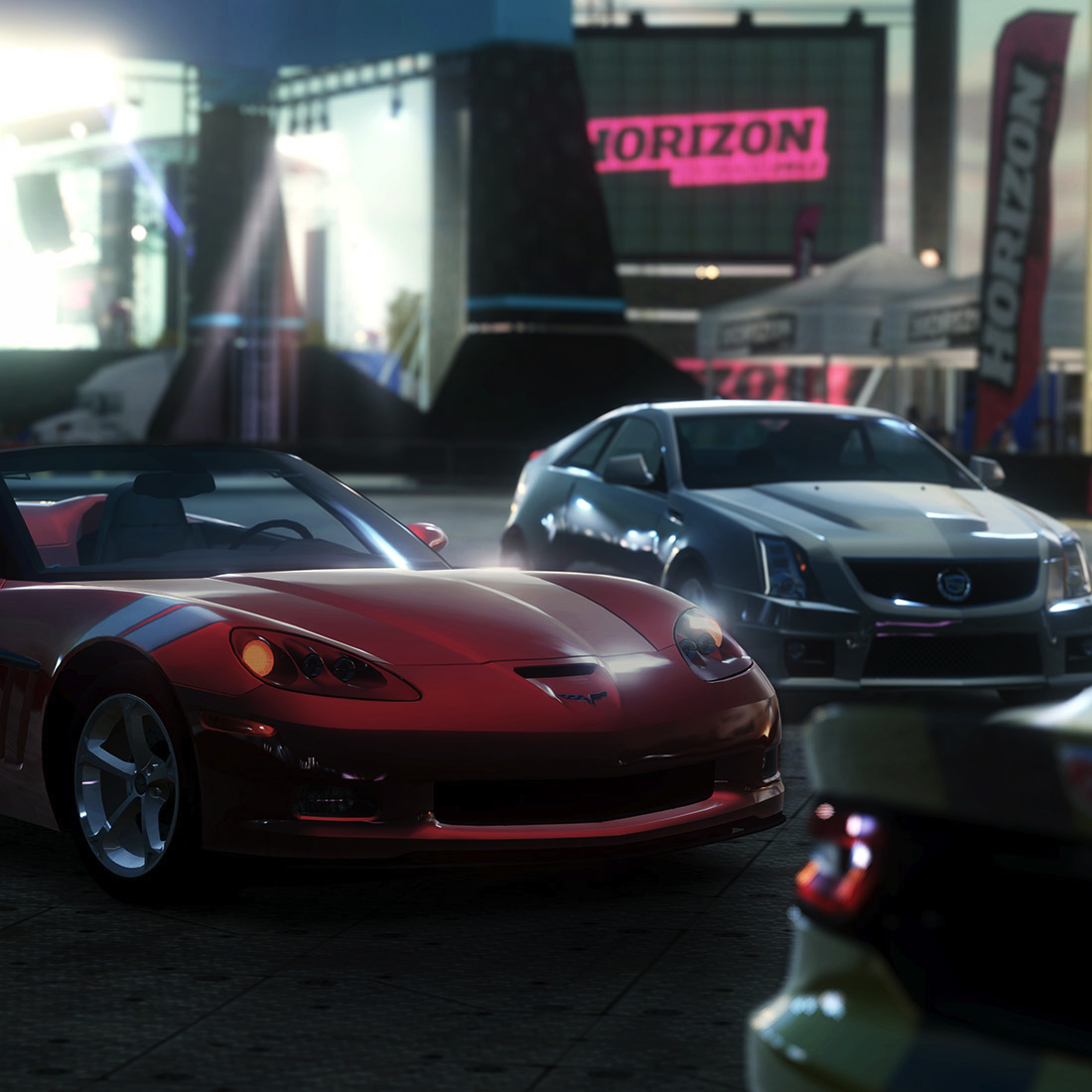 THE BUSINESS OF SPEED

Alongside the open world and arcade elements, Forza Horizon expands one of the series' newer features: microtransactions. Horizon uses the token system introduced in Forza Motorsport 4. If you want to want to purchase a new car but don't have enough in-game credits, you can buy a token on Xbox Live with real money.

In the 15 to 20 hours that it took me to work through Forza Horizon's main events, I earned around 7 million in-game credits. Car costs range from 100,000 credits or lower to over 1 million credits for the best vehicles in the game. Lower-end vehicles cost one token (80 Microsoft points/$1), while more expensive cars can cost as much as seven tokens (560 Microsoft points/$7). You can also purchase a "treasure map" with five tokens to unlock the location of all the game's collectibles on the map - and this purchase is not available using in-game currency.

In addition to the microtransactions, Forza Horizon has an aggressive DLC plan, including monthly DLC releases and a hefty expansion coming in December. The microtransactions are never forced on you, but when paired up with the huge amount of paid DLC in the works, it feels like the game is desperate to squeeze your wallet empty. 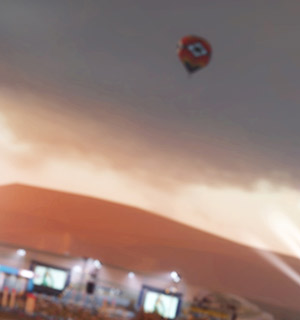 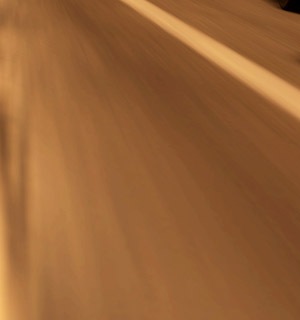 Horizon is at its best when it drops the sim pretense and embraces its arcade nature, as in PR stunts that require you to get a certain number of points in a limited time frame. Points are earned by pulling off drifts, near misses, air time, and other dangerous acts. The game finds an addictive risk/reward balance here; you can continue driving like a mad man to build up your score and increase your multiplier or slow down at any time to cash in however many points you've earned. It made me retry PR stunts over and over in search of the elusive perfect run - I just wish there were more of them in the game. 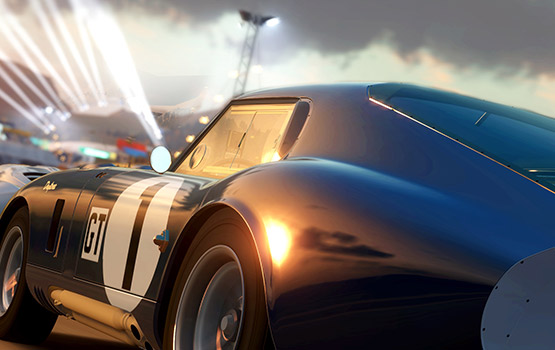 The score you earn from performing stunts increases your popularity. This system encourages you to go for crazy passes and stylish drifting even during regular races, but it's a meaningless bar to fill. Increasing your rank doesn't change anything in the game or provide you with any bonuses. Even grinding out all the points necessary to hit number one gives you nothing save for an achievement and access to a handful of showcase events. Horizon's more shameless collectible - a series of 100 signs hidden around the world to crash into - provides a hefty discount to upgrade parts. It would have made more sense in context of the world if the popularity meter was doling out that reward.

Aside from those collectibles, the open-world aspect for Forza Horizon isn't put to much use - even in multiplayer. You can invite up to seven other players to race around Colorado in free roam mode, but there's very little going on. You can't jump into specific events from free roam, and aside from a handful of co-op challenges, there's nothing to do here. The regular Forza multiplayer options are also present - including race events and fun modes like cat-and-mouse and infected - but I noticed frequent lag in my match-ups that would send other players zig-zagging across the map.

Phil Kollar is Polygon's Deputy Reviews Editor, and is actually rather fond of the color pink. Follow him on Twitter.

Note: A previous version of this review incorrectly stated that Forza Horizon introduces the token system to the series. This system was in actuality first used in Forza Motorsport 4. The review has been updated to reflect this information.

Forza Horizon is never fleshed out enough to reach its potential. Thereâs value to the idea of making a more outwardly accessible entry in a series thatâs normally targeted at hardcore car nuts. But Horizonâs accessibility gives way to a lack of foresight. Its open world feels empty, its economic model is questionable, and its armada of cars are powerless against arbitrary AI escalation. Forza Horizon has more flash than its predecessors, but itâs hollow by comparison.