"We never wanted to talk down to teens or young people"Patricia McLaughlin, Legacy Foundation

Share All sharing options for: Flavor Monsters aims to prevent youth smoking by revealing the truth about tobacco

It's hard to prevent a person from doing something without telling them not to do that thing, especially when that person is young.

It's even harder when that something is smoking.

The nonprofit American Legacy Foundation has taken on that challenge ever since 1998, when it was established out of the landmark Master Settlement Agreement between 46 states and the nation's four largest tobacco companies. Now known as Legacy, the organization seeks to "build a world where young people can reject tobacco and anyone can quit," according to Patricia McLaughlin, assistant vice president of communications.

I spoke with McLaughlin on the New York Comic Con show floor, at a colorful booth ostensibly built to promote a line of candy with 45 flavors. The booth's walls sported faux-vintage posters featuring kids, but with unsettling elements. One, advertising a "pucker-iffic" sour apple flavor, showed a child sucking in his cheeks — one of which appeared to be rotting.

That strategy — drawing people in with a compelling hook and then turning the tables on them to convey a message — is a hallmark of the Truth campaign, Legacy's most visible youth smoking prevention initiative. Truth was launched in 2000 as a way to educate young people about the dangers of smoking as well as the tobacco industry's insidious tactics. Its iconic campaigns have won hundreds of advertising awards, and they've effected change: Between 2000 and 2004, Truth prevented about 450,000 teens from starting to smoke, according to a 2009 study published in the American Journal of Preventive Medicine.

That entails reaching teens through their "passion points" — McLaughlin listed fashion, music and gaming as the main ones — and building projects around those elements. Truth's latest effort in that vein is Flavor Monsters, a free-to-play iOS and Android title developed by Venice, Calif.-based Sabertooth Interactive that was the actual raison d'être of the New York Comic Con booth. McLaughlin told me Legacy endeavored to produce a game that young people could enjoy from the start, before discovering its underlying message. 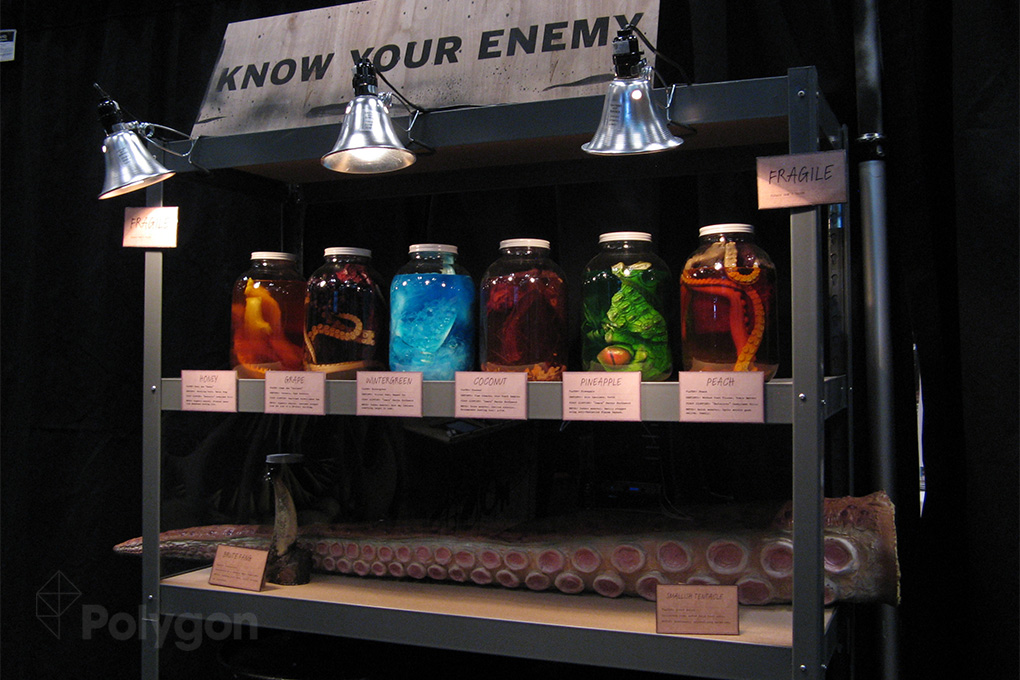 The booth's colorful entryway opened up to a relatively drab interior, with mostly gray and black metal surfaces, that gave off a military vibe, perhaps to prepare visitors for the battle against the game's titular creatures. The monsters themselves provided some eye-catching color: Life-size costumes for two of the beasts took up a corner, and jars held appendages from some of the monsters, floating in vibrant brine. I noticed that numerous visitors were drawn to the creepy, scientific-looking display, which was labeled "Know Your Enemy." McLaughlin told me that Truth designed the booth to look like a candy store, explaining that many of the visitors walked in because they were enticed by the colorful presentation outside.

Flavor Monsters offers a hybrid of tower defense and shooting, tasking players with defending a region of the United States from three waves of monsters. Players can take advantage of in-app purchases to expand or improve their arsenal with new weapons, tools and abilities. The action is fairly standard fare for a touch-controlled title, and it offers few if any hints at a public health message. It's not until players delve into Flavor Monsters' "Field Manual" that they become aware of the game's smoking-prevention strategy.

The Field Manual explains Flavor Monsters' namesake. Legislation passed in 2009 outlawed the sale of flavored cigarettes, reasoning that tobacco companies produced such items specifically to hook kids. But the law doesn't concern non-cigarette tobacco products, over 45 flavors of which remain on the market. Truth addressed this in its 2011 campaign, "Unsweetened Truth," which Flavor Monsters builds upon — its monsters' names, like Honey Buzzer and Strawberry Brute, are based on the candy-like additives in existing flavored tobacco products.

Flavor Monsters isn't Legacy's first foray into video games. Last year, the company published its debut mobile game, Night of the Gummies, on iOS and Android; it offered similar tower-defense gameplay. And the Truth website has hosted free Flash games about smoking prevention since 2006. McLaughlin characterized this history of socially aware games as "[staying] one step ahead of the teen audience," a strategy that evolves as teen interests change.

The Unsweetened Truth commercial featured adults suffering from debilitating conditions caused by tobacco use: A few were missing parts of their jaws, while another was forced to use an electronic voice box to sing the ad's refrain, "Why do they make tobacco taste sweet?" But according to McLaughlin, such shock-value campaigns "don't resonate [well] with kids" — young people believe they're invincible, and moreover, smoking still holds appeal for teens as an act of rebellion. Instead, she told me, "We ask ourselves, 'How can we have a conversation with [young] people?'"

One way in which Legacy has done that is by taking Truth on tour. Every summer, orange Truth trucks travel across the nation to events where young people congregate, such as the Vans Warped Tour and the Tony Hawk Birdhouse Tour. The 2012 Truth tour has stopped at more than 100 events in 31 states so far, said McLaughlin. This year, it included a particular focus on gaming: Prior to attending New York Comic Con, the tour visited a few Six Flags locations, along with gaming-related events such as Gen Con in Indianapolis and Dragon Con in Atlanta.

The Truth tour's chief messengers are "tour riders," staffers who are typically in their 20s and travel with the tour. It's a paid, highly competitive position — Legacy received over 1,400 applications for 14 positions this year, according to McLaughlin — and the company hires people based partly on their passion for smoking prevention, as determined by videos submitted with their applications. As fellow youths, the tour riders can easily engage young people one-on-one; McLaughlin characterized those interactions between tour riders and visitors as an important success story for Truth.

"There's a lot of dimensions to smoking," McLaughlin pointed out, as she related anecdotes of Truth tour attendees telling her stories of how tobacco affected their lives. There are also many ways to reach today's young people, who have wider interests and are more tech-savvy than ever. Gaming is a particularly appealing avenue, especially since mobile platforms allow for games that are cheaper to produce and include a lower barrier to entry than in the past.

As a game, Flavor Monsters may be a relatively simple casual title. But it's already a popular one, with more than 100,000 downloads on Google Play alone. "We never wanted to talk down to teens or young people," said McLaughlin, explaining Legacy's strategy of engaging young people on their terms. That philosophy appears to be working, and hopefully, Flavor Monsters will continue to espouse Truth's smoking-prevention message.