Medal of Honor: Warfighter is more fun when it plays itself

Share All sharing options for: Medal of Honor Warfighter review: rules of engagement

Review and information for Medal of Honor Warfighter

Its Medal of Honor reboot in 2010 landed with a thud in its attempts to tell an in-medias-res story of real life military operations in Afghanistan in the Shahakot mountains. Medal of Honor Warfighter aims to tell its own fictionalized account of supposedly real events.

Danger Close purports to have nobler goals than just another war story. It's talked at length about their quest for authenticity, if not realism.

Very little of it shows in the final product. Medal of Honor Warfighter fails in almost every regard. Warfighter’s campaign is a jumble of flashy parts that Danger Close unsuccessfully tries to glue together, and the solid foundation of its multiplayer is buried under a broken interface, small maps and poor interface design. 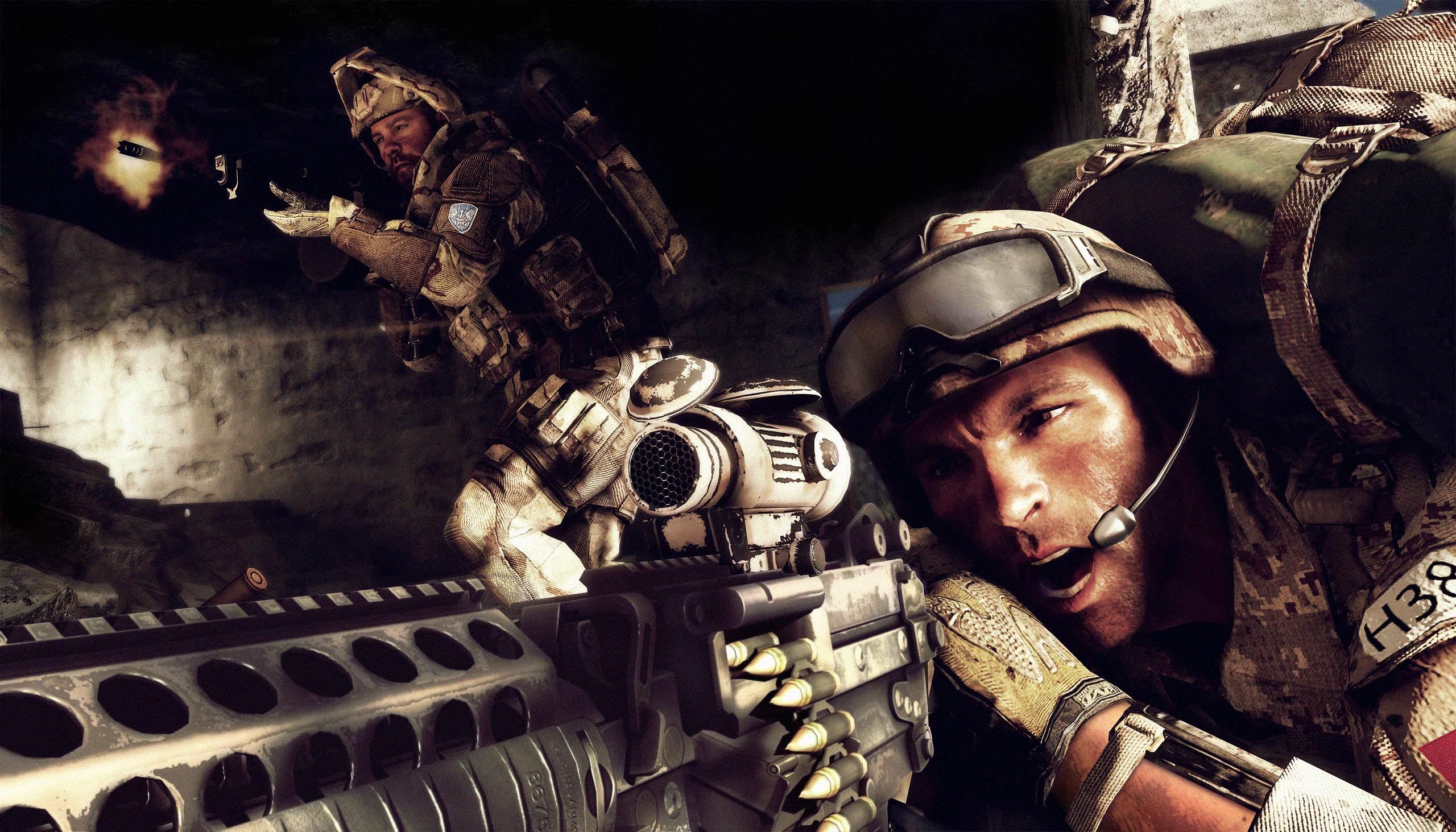 Medal of Honor Warfighter tries to tug on the heartstrings right away by relating the story of a man torn between the sense of duty he feels for his country and his responsibilities as a father and a husband. You know this because there are cutscenes about it approximately every 20 minutes. It's an attempt at a softer, more human main character than shooters typically try. I found myself clinging to that differentiating factor after just half an hour or so of one of the most monotonous, poorly plotted, derivative shooter campaigns I've ever played.

Derivative isn't a dealbreaker. Great artists steal, and all that. But Medal of Honor Warfighter seems hesitant to let you really play it. A section where you might need to take out enemies from a distance doesn't let you approach it how you want, it drags you to a window and sticks a sniper rifle in your hand. The first mission practically plays itself.

The awful truth: It's more fun when it plays itself. Medal of Honor Warfighter's campaign is beset by weapons that feel like slingshots and enemies that behave like murderous but idiotic robots. It's like playing whack-a-mole in "It's a Small World" at Disneyland, save that Warfighter tours global locations plucked from a decade's worth of headlines about Islamic fundamentalism, held together by the MacGuffin of PETN, a powerful, real-life explosive powder. 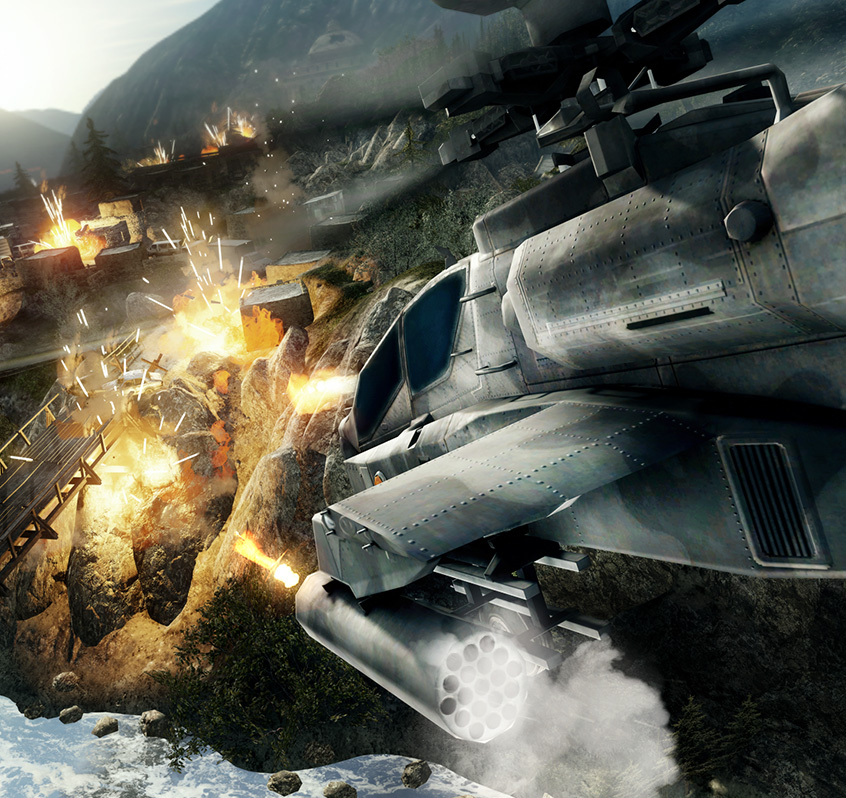 Battles are frustrating enough by virtue of the uncanny accuracy of enemy combatants, but it brings a whole new level of fury to things when your AI teammates act in ways that seem designed to get you killed. Taking cover to peek around and take a shot at a machine gunner or technical? Better hope your squadmate didn't have that cover point added to their scripting routine, or they'll push you out of the way and into the line of fire. Your field of fire makes no difference to them. They do what they do.

The only inspired moments in Medal of Honor Warfighter’s campaign come from another studio, in the form of driving sequences developed by Need For Speed: The Run studio EA Black Box. These should be awful distractions, but they’re tense, fast, and fun. They were welcome reprieves from the otherwise constant boredom and intermittent frustration.

Multiplayer almost feels like a different game, though Danger Close developed Medal of Honor Warfighter's multiplayer in-house instead of relying on DICE as with 2010's Medal of Honor. Basic movement and gunplay are slower than games like Black Ops 2 and Modern Warfare 3 — it's more deliberate. Players take more punishment to kill, and average players can expect a maximum of two or three kills if they're lucky before they'll need to reload or switch to their sidearm.

For Battlefield 3 players, there's an instantly familiar loop of a few quick bursts with your main weapon and a quick switch to the sidearm to mop up any stragglers should you survive a firefight. Learning what you can do and how much is vital for every weapon and class in Medal of Honor Warfighter.

Players can choose between four basic soldier types — assault, snipers, heavy gunners (with machine guns) and demolition specialists who arm and defuse objectives more quickly, and who have armored exteriors to make up for their slow movement speed. There's also the point man and the spec ops class, but these use assault weapons — the difference is in their class abilities.

The real variety comes from Warfighter's global menagerie of special operations personnel. Each represented country has one or more (in the case of the US) specialized assault classes, each with a specific weapon and its particular attachments. You can pick any country's assault class to start, but afterwards you'll be unlocking them over time.

"For Battlefield 3 players, there’s an instantly familiar loop ... Learning what you can do and how much is vital for every weapon and class."
Warfighter's modes are great in concept and neutered by map design 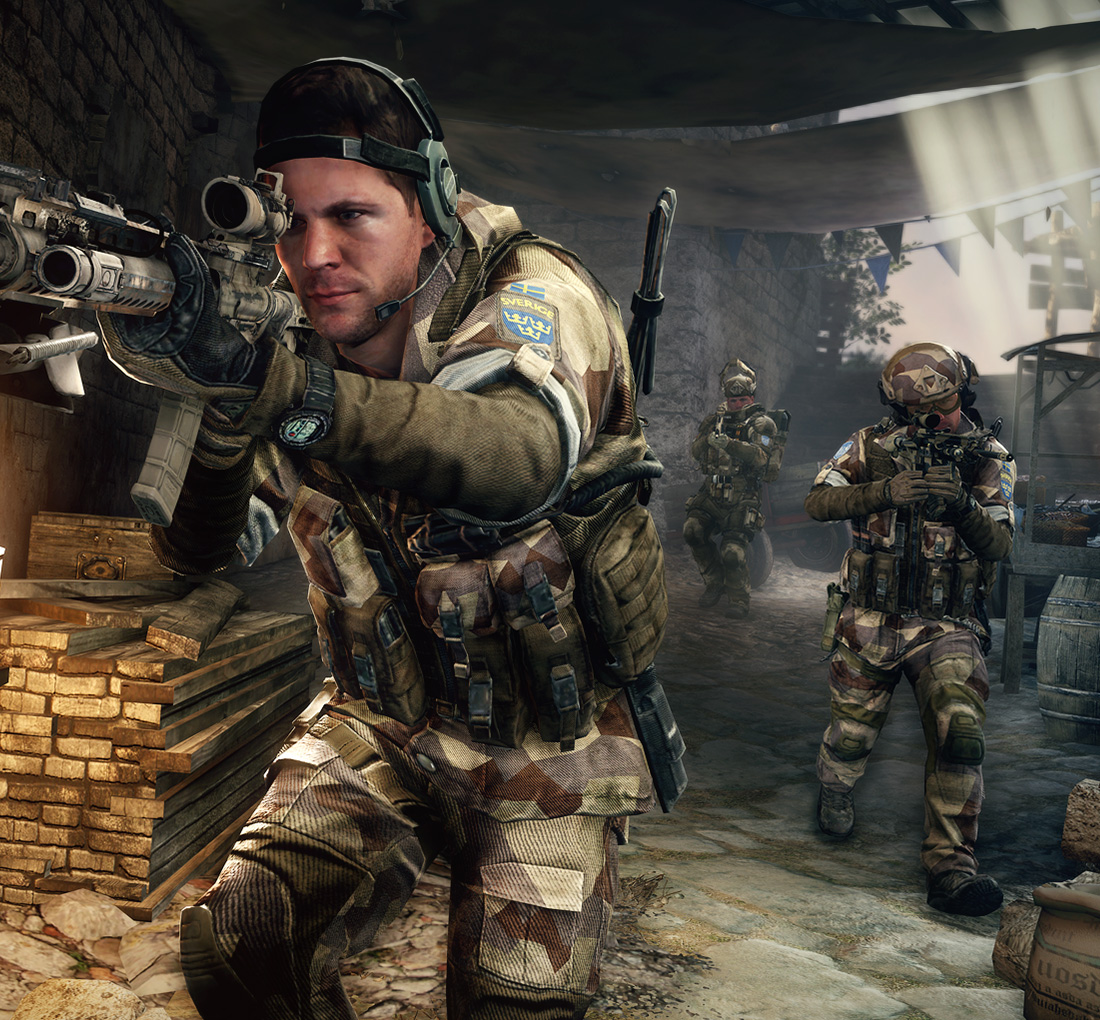 This is an issue because you're limited to your starting assaulter to begin with, and your options will stay limited for at least a few hours as you grind out against players with many more weapon types at their disposal. If you make a choice you're not happy with, you're stuck with it. There aren't any pre-built classes to experiment with.

Still, the basic mechanical underpinnings of Medal of Honor Warfighter are sound. They're built on the foundation of Battlefield 3, which has proven to be one of the most popular online first person shooters in history. Movement and shooting aren't as snappy as some shooters, but there's a great balance between momentum and a sense of weight and consequence. Danger Close's addition of the lean-mechanic from the campaign makes for an interesting tactical wrinkle, though it's less effective against actual human beings than it is against brain-dead AI fodder. But Medal of Honor Warfighter is derailed by consistently botched design choices that make its mechanical competency frustrating to find.

The interface is a mess, cluttered with messages and a nightmare to navigate. This is exacerbated by nearly unreadable text almost everywhere, from player names to the post-game info dump. Accessing anything other than quick matches is three to four levels deep in Warfighter's menus, and if you want to play something specific, you're either creating a match yourself or digging through a server browser. Even the Fireteam mechanic, where you're partnered with another player as a sort of mutually supportive army of two, is never properly explained. All those things I just told you about how classes work and how your country determines the weapons you start with? Medal of Honor Warfighter is completely opaque about this and almost everything else about its modes. 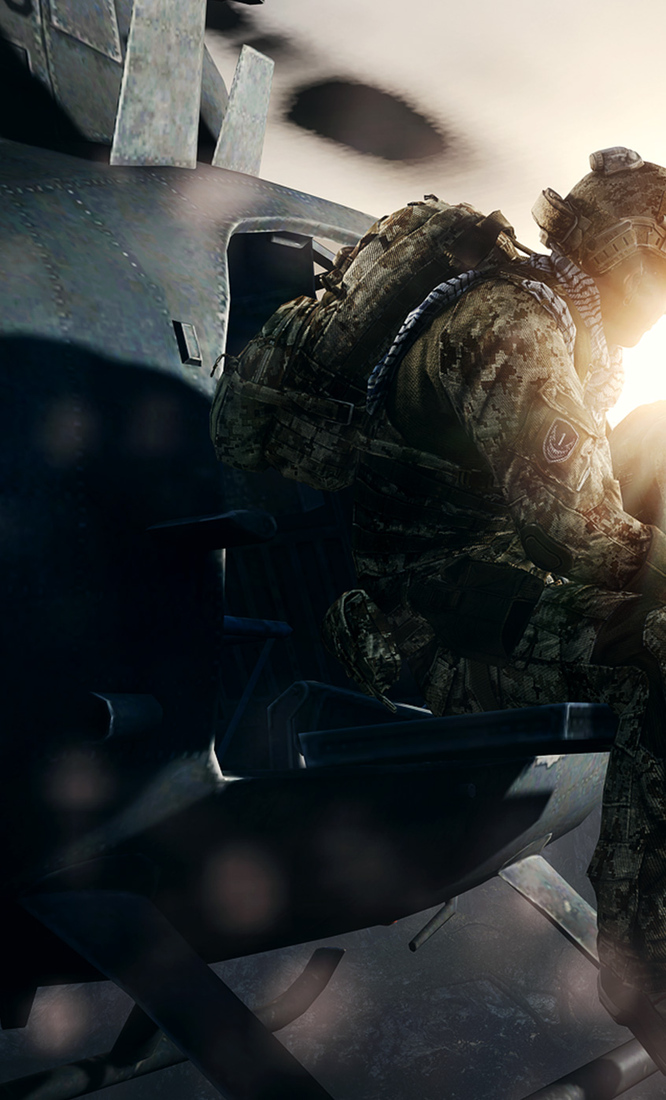 Those modes are relegated to dumbed down versions of objective modes found in more squad-focused multiplayer shooters. There's a passing resemblance to Battlefield 3's Conquest and Rush modes in the form of Sector Control and Combat Mission respectively. Combat mission alternates between attack and defense — attackers must take a series of points by arming a control point with a limited number of spawns. Sector Control is a contest to control three points on the map until either time runs out or one team dominates enough to fill the bar at the top of the screen. 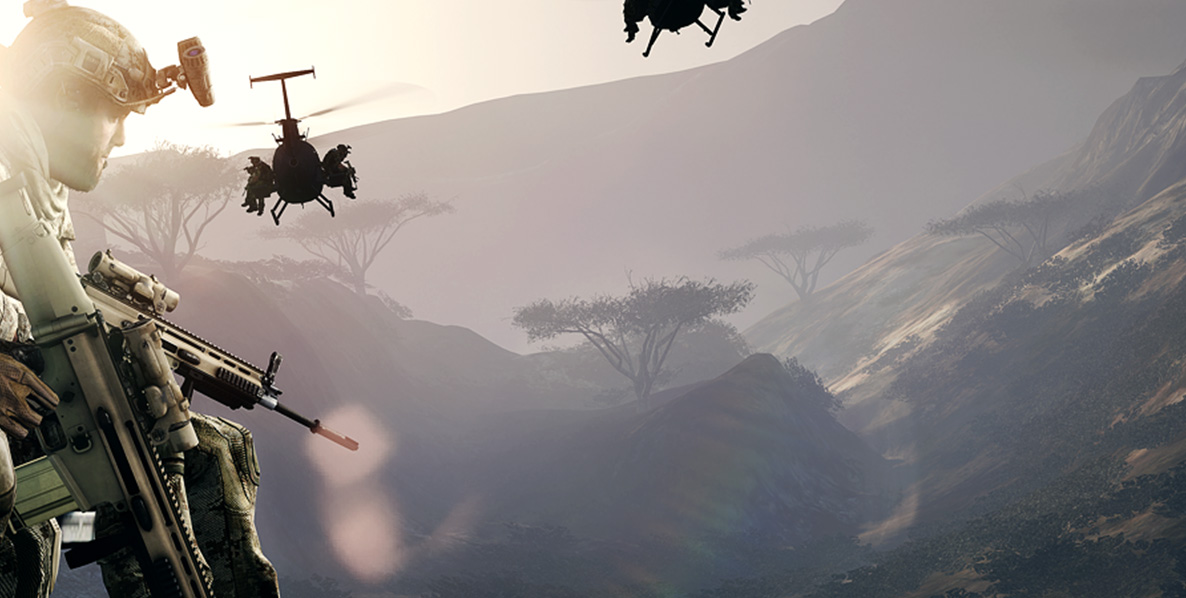 The modes are great in concept, but they're neutered by map design. Maps are small and lack even the hint of safe spawn points, even in "neutral areas" — with 20 player matches, there's just not enough space to designate any area off limits. This leads to vicious cycles where one team will get a small tactical advantage that they can easily exploit to rack up points and killstreak-style support actions that further allow the winning team to nail the losers against the wall. Matches are lopsided and chaotic more often than not, and the sense of flow and movement present in the best objective mode-oriented shooters is nowhere to be found here.

Medal of Honor Warfighterâs multiplayer failings underline its real problem â it feels thrown together, with little consideration for why its parts should fit. While the multiplayer's obtuse design decisions are preferable to the campaign's lack of artificial intelligence, decent mechanics, or interesting level design, it's still difficult to find much reason to recommend Medal of Honor Warfighter over the shooters it wants so desperately to resemble. In an attempt to build a bridge across Battlefield 3 and Call of Duty, Danger Close has once again fallen into the hole between them.

Our review of Medal of Honor Warfighter 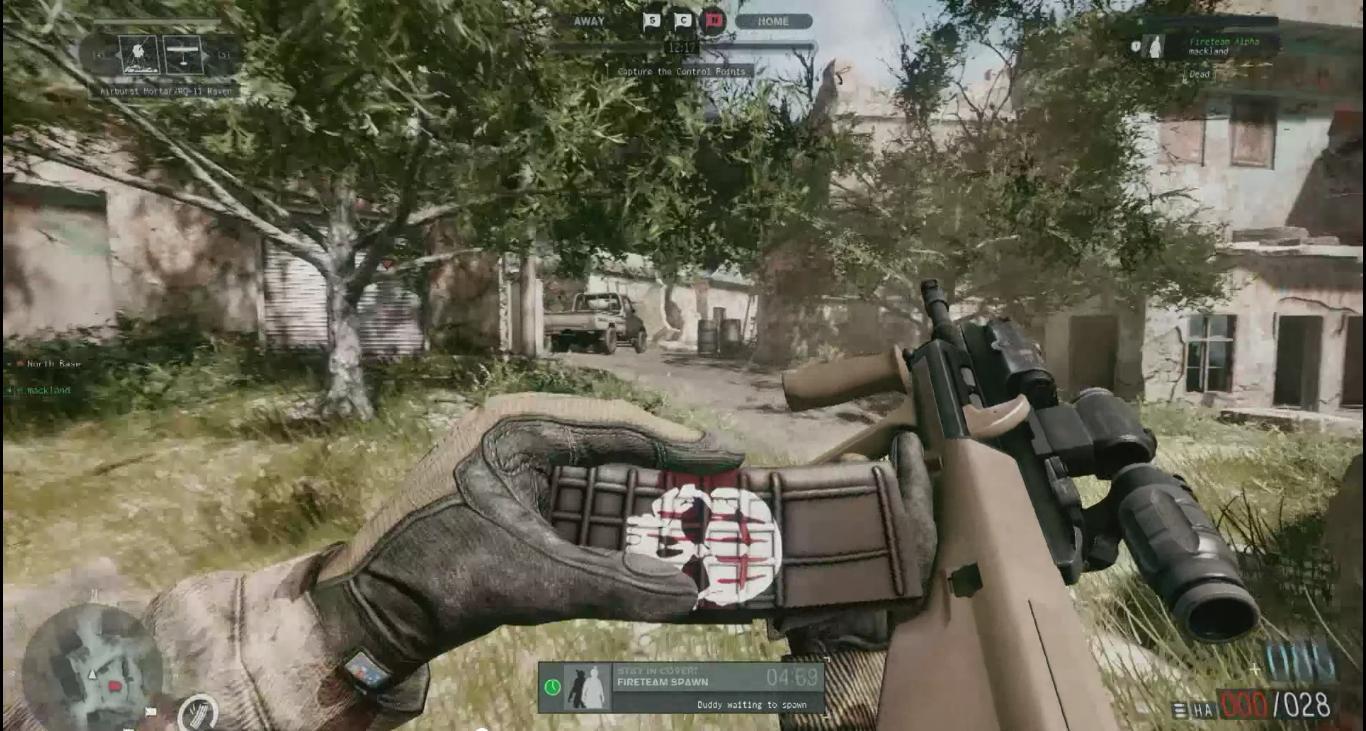