New Little King's Story misses some of the original's charm, but it's still fun

Like any good fairy tale, New Little King's Story hides a moral at its core — just maybe not exactly the one that developer AQ Interactive had in mind.

Though based off the 2009 Wii game with three-fourths of the same title, New Little King's Story isn't a port. But it's also not exactly new. Konami has called it an "enhanced edition," but I'm hard-pressed to name a single element of it that's been improved from its original release.

New Little King's Story borrows the basic plot structure, cheery world and light strategic gameplay of its Wii ancestor. Even three years later, it feels fresh. But some of its magic has been lost in the handheld transition. New Little King's Story nearly succumbs to the unenviable burden of a scaled-down scope and major technical problems. 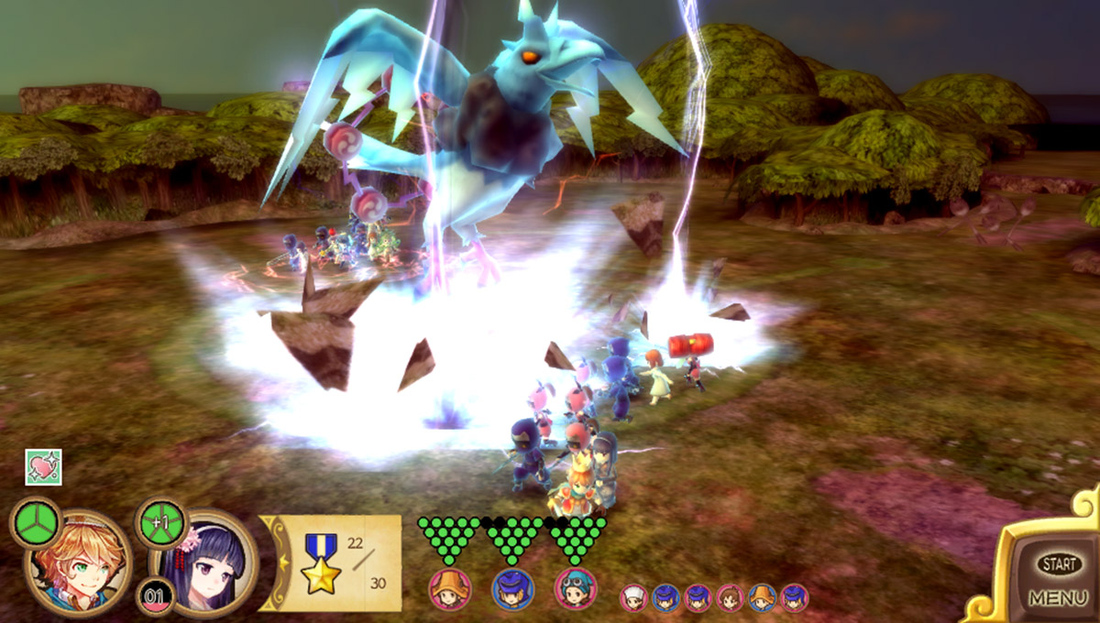 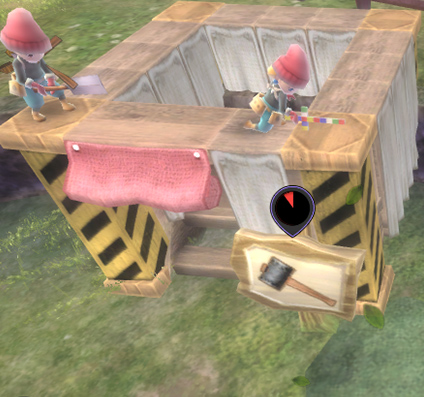 New Little King's Story begins with young King Corobo losing his crown, castle and a cadre of princesses during a siege by a mysterious evil force. Corobo is forced to start from scratch in the tiny village of Alpoko, rebuilding his kingdom and army to rescue the captive princesses and win back his throne.

The early moments of New Little King's Story play like a traditional, sword-swinging action-RPG, but as the once and future king, your responsibilities quickly escalate. As you hunt down gold to build the kingdom's treasury, you decide where to allocate funds.

Should you build more farmhouses to encourage population growth or a theater to make your current villagers happy? Or maybe you'd rather blow your budget on a rare set of armor from the shady merchant who's taken up residence in town. The town management portion of New Little King's Story is fleshed out just enough to be addictive. It always presents a handful of exciting projects to plan toward but never overwhelms you with a paralyzing number of options.

New Little King's Story works that perfect feedback loop into the exploration of the areas surrounding Alpoko as well. The game has an enticing push and pull between exploring and building. Limited inventory space forces you to return to the castle to hoard whatever treasures you've gathered on each expedition, encouraging you to keep investing in the kingdom as you become more familiar with the lands around it.

Of course, you wouldn't be a good king if you did all the work yourself. While you're controlling the direction of the kingdom, you can also micromanage individual citizens, assigning them occupations ranging from the obvious (soldier, lumberjack) to the strange (gourmet cook, mountie). These loyal subjects can then be recruited as part of your royal guard, following you around, fighting monsters, and performing other menial tasks.

It's hilarious to throw farmers on top of a giant mushroom enemy and watch them slowly chip away the creature's health, but networking with the general populace has some major drawbacks. The number of occupations balloons after six or seven hours, and you'll always want to take at least a couple of every type with you just in case you run into a barrier that only the carpenter or the merchant can get past.

New Little King's Story's interface doesn't offer an easy way to manage your current royal guard or swap out citizens of different occupations. Ideally you could do all of this stuff rather quickly from a menu. Instead, I often found myself aimlessly wandering around my growing city, trying to track down one more hunter to round out my group. Equipment management is also a tedious chore as you try to juggle armor and weapons for over 100 residents. 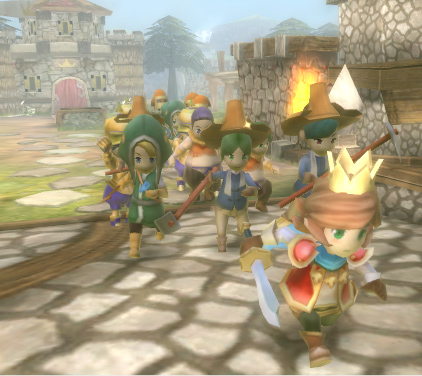 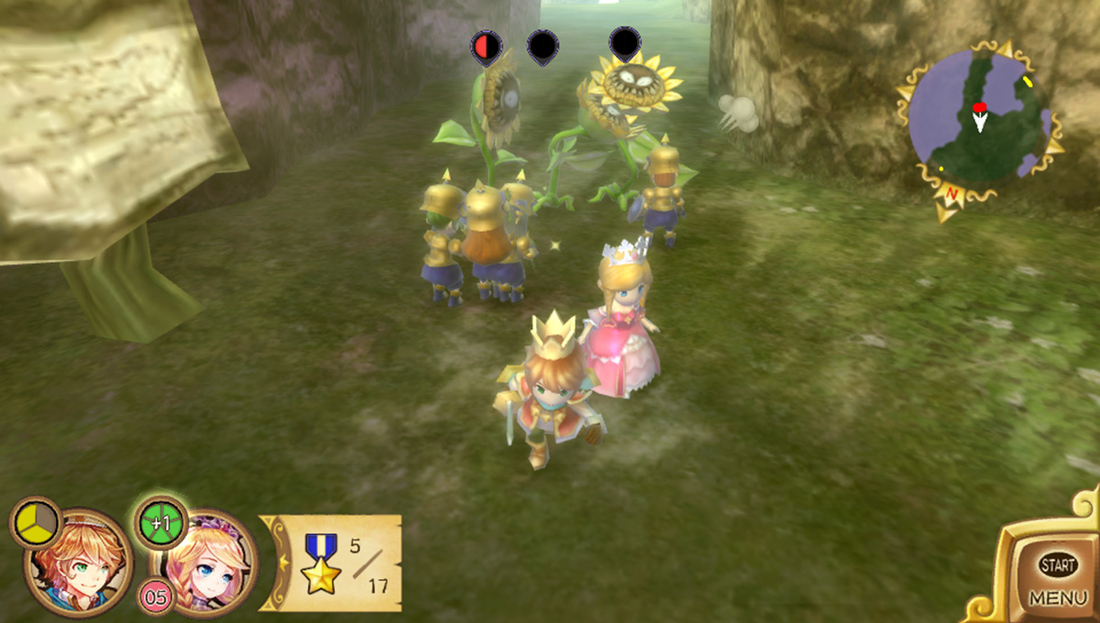 New Little King's Story comes up lacking in many technical areas, but one of its most glaring issues is its terrible translation. Sometimes the broken English seems to be done on purpose for laughs, such as the strange letters sent by townspeople. But more often nonsense dialogue heaps an unnecessary level of confusion onto the plot.

Here are a couple of my favorite badly-translated lines, which had me laughing out loud for the wrong reasons:

"Than this I perform a briefing for the demon king subjugation."

"The crystal is the key bringing the end in the world to this dreams and phantasms."

New Little King's Story rewards progress by allowing you to add more citizens to your royal guard, but this ends up a double-edged sword as well. By the time I was able to pull in more than 10 citizens at a time, the game's framerate dipped frequently, especially in the building-filled town. At the end of the game, my army had grown to a massive 30 people and performance suffered almost everywhere. The game never slows to unplayable levels but it's noticeable enough to leave a bad taste in my mouth.

Corobo's snail-paced army faces its most imposing obstacle in the form of constant repetition. The game floods out a non-stop stream of unique enemies and encounters in its first 10 hours, but the well dries up by New Little King's Story's halfway point. The original Little King's Story mixed up boss encounters by introducing wild new mechanics — a quiz show, a geography test, a shoot-em-up. New Little King's Story has a handful of these exciting genre change-ups, but it reuses several boss types multiple times in battles that take far too long for recycled material.

New Little King's Story's framerate dips frequently in the building-filled town; at the end of the game, performance suffers everywhere

New Little King's Story's biggest departure from its predecessor comes in its last act. The original game ended with a bang, taking Corobo and crew out of Alpoko's storybook world and into unexpected new territories. This version has a more traditional — and more boring — climax to match the generic anime style of the new visuals. An eleventh hour plot twist forces you to backtrack, and the lame final boss fails to instill any drama with his clichéd intentions. That doesn't seem like much of an enhancement to me.

New Little King's Story is still fun and unique, particularly if you don't have a means of playing the original. But so many of its adjustments are baffling steps backward and joy-sapping tweaks. It seem to be driven by a desire to make things different even if they aren't better. At least New Little King's Story leaves us with a lesson: Change is not always progress.