World of Tanks, World of Warplanes, World of Battleships will soon combine to form a massive online game of risk.

Russia, Victor Kislyi explains to me, is a tank culture. America, he says, is a warplane culture. Japan? They are battleships.

It seems appropriate that the world, as seen through the eyes of the president of Wargaming.net, is a Venn diagram of war machines.

World of Tanks was the game that helped launch Kislyi's already successful strategy game development company into the stratosphere. The massively multiplayer online tank assault game launched in Russia half a year before it made its way to North America, because Kislyi knew that Russians love tanks.

As he describes it, there was no risk.

He feels the same way about Wargaming.net's upcoming massively multiplayer online dogfighting game, World of Warplanes. Only this time it is in America that this latest endeavor seems a sure thing.

World of Battleships, still in the early stages of development, will do very well in Japan, Kislyi tells me.

We're sitting in a second floor conference room packed with World of Tanks and Warplanes mousepads, bags, sunglasses, even boxed remote control airplanes. Kislyi, the founder of Belarus, Minsk-based Wargaming.net, greets me at the door when I arrive with a broad smile and a thick Russian accent. He gestures to a massive platter laden with fruit and cheese as we sit opposite one another at a heavy wooden conference table and asks if I want something to eat or drink. The floor thrums with the noise of tank and air battles. The meeting rooms are perched above a massive E3 booth packed with rows of computers running World of Tanks and World of Warplanes. A building-sized television endlessly loops video of the games, and History Channel style graphics of engagements.

This booth, roughly the same size as the booths of more well known developers like Take-Two and Warner Bros Entertainment, is a stark reminder of Wargaming's sudden rise to popularity and success.

Wargaming.net, Kislyi tells me, currently has about 900 employees. About 450 of those employees are developers, the other half are operations experts spread across ten offices located from California's Bay Area to Russia.

Those 900 people are researching, making and maintaining games for the company's 30 million registered players.

I'm still clattering away at my laptop's keyboard, when Kislyi turns to a marketing person in the room and orders: "Give him the statistics."

While the World of titles are graphically rich, strategically intense games, all three are driven by math. The numbers of battle, the calculations of physics and chance, and the careful balance of percentages can make or break Kislyi's games. And he's intensely aware of that.

"We have math guys who analyze all of this stuff," he tells me. "They have multiple graphs."

And the most important calculations are the ones used to determine the cost of repairing and maintaining the games' namesakes. While World of Tanks is a free-to-play game, players need to spend in-game silver to repair their tanks, and soon their planes. Sometimes the money earned in a battle won't pay for that repair so they have to buy gold with real cash, or go fight smaller, more successful skirmishes to earn the money needed to repair their other vehicles.

Finding the sweet spot for repair costs and money earned in a battle is literally a science, one that Kislyi devotes an entire team of mathematicians to.

"There are a lot of statistics behind it," he says.

World of Tanks pulls vehicles from a range of classic battles and conflicts, from World War II to the Korean War. It will never include modern tank fights, Kislyi said.

"Modern tanks fight without seeing each other," he said. "It's all missiles and satellites. One modern tank would destroy an entire field of historic tanks."

World of Tanks launched with just six different armored vehicles. Now there are more than 140 vehicles. The game will eventually top out at about 500.

The goal, Kislyi said, is to release new vehicles every month.

"We have years of vehicles still," he said. "We still have Japan and England, for instance."

The same will be true for Warplanes.

"There are more planes than there are tanks," he said. "Everyone had warplanes."

Already the game has about 60 types of planes from Germany, the Soviet Union and the U.S. After launch the plan is to expand the planes to include British and American models, he said.

All of the war games are strictly historical affairs. There is very little room for fantasy in the battlefields of Wargaming.net.

The tanks of World of Tanks are carefully detailed by a team of researchers who spend their days in libraries and museums pouring over books, blueprints and sometimes even the real thing.

What little fiction that has been injected into the vehicles of the triad of war games still has roots in history.

For instance, Germany ceased production of tanks in 1945, Kislyi says, but there are plenty of blueprints around for some never-built armored vehicles, the so-called German super weapons. In those cases, Wargaming's researchers use the original blueprints and a little creativity to craft in-game working vehicles.

"We come to the level of fantasy that our players accept," he said.

World of Tanks launched with 6 armored vehicles. Now there are more than 140. Eventually there will be about 500. 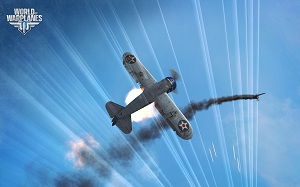 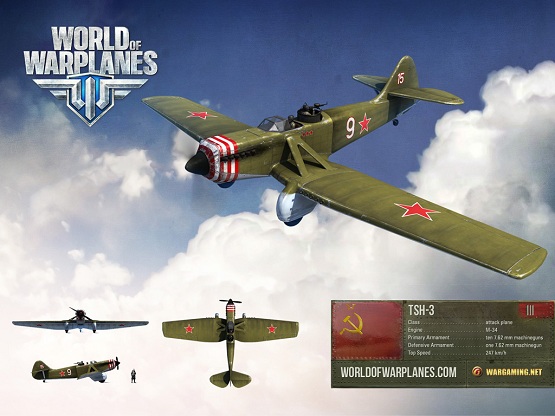 Down on the floor, in the swirling mayhem of E3, I find my way to a computer, settling down between two other players among a bank of screens. The beta version of World of Warplanes is running endless dogfights throughout the show.

The game supports a variety of controls — from simplified to expert — using keyboard and mouse, gamepad or even a flight stick. I tried playing first with a keyboard and mouse, the way a person who's never experienced a flight combat game might. While the mouse and keyboard controls are cleverly crafted and loaded up with enough visual cues to make playing relatively easy, I still preferred using a gamepad.

Combat and flight with the controller was relatively straight forward, and the game's graphics are impressively detailed. Most impressive, though, is the amount of attention the developers paid to not just the plane, but the plane in motion. Forced stalls cause the propeller to slow and then stop, enemy gunfire peppers wings and the fuselage with holes. Planes smoke, wings rip off — there's full deformation. The endless dog fights feel acrobatic and tense.

Even while the team is hard at work on finishing up World of Warplanes, they're still putting a lot of effort into World of Tanks, Kislyi said.

"You don't imagine how much new stuff our players want from us every day," he said.

The teams are working on new modes, and also experimenting with creating maps and rule sets that will allow players to faithfully fight through historic battles. 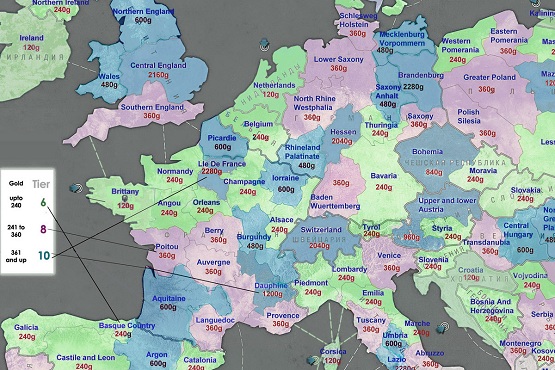 Perhaps the most important effort the team is working on is Clan Wars.

In Wargaming's universe, Clan Wars isn't just a way for people to buddy up and play the same games they've already been playing. Clan Wars is how Kislyi plans to neatly lace together all three of his company's massively multiplayer games.

At the highest level, Clan Wars is essentially Risk that takes place on the company's Global Map.

Clans of 15 to 100 players will fight over ownership of province of the map, with each chip in a province representing a single tank ... or plane ... or battleship controlled by a real player.

Control of a territory will net the player's clan regular deliveries of silver, which can be used in the game to repair vehicles and buy consumables. So there's a direct benefit in participating and winning.

Initially, when one clan invades another clan's province, a scheduled battle kicks off within World of Tanks with players dropping into their vehicles and shooting it out for ownership of the territory.

Eventually, the plan is to incorporate both World of Warplanes and World of Battleships into Clan Wars as well, Kislyi said.

"So before tanks, we have to fight an air battle," he said. "If I win I get two extra air strikes during the match, or maybe a recon aircraft."

Once Battlships launches, victory in a war at sea would give the victor barrage support in that ultimate tank battle for ownership of a territory.

Currently only about 20 percent of World of Tanks players are participating in Clan Wars, which is still in beta, Kislyi said. That might be because Clan Wars requires a deeper level of commitment than a core group of the game's fanbase are used to giving.

Clan Wars brings all three war games together onto a single global map. 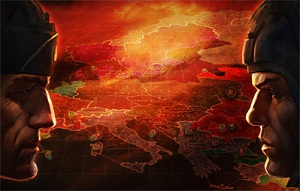 "We are taking historically accurate, niche-targeted, hardcore games and making them accessible for millions of players." 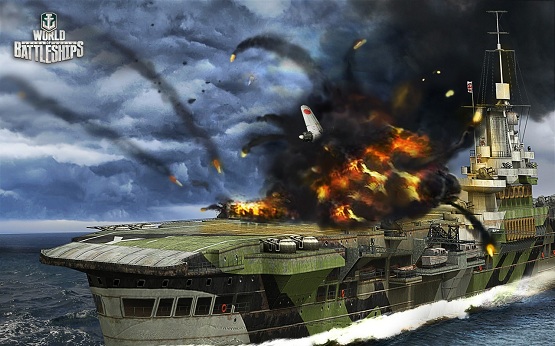 One of the keys to World of Tanks success, Kislyi believes, is that it offers people, especially older gamers with families, a chance to quickly play a game.

"If you only have five to seven minutes, you can sneak in once or twice to battle while your wife is preparing to go out," he said.

The ability to quickly pick up and play a match of World of Tanks has the team also thinking about exploring a mobile version of the experience, Kislyi said. But it doesn't sound like they're very interested in bringing their game to consoles, at least not yet.

"Those big companies are too big, too slow, too bureaucratic," Kislyi said. "It's irritating sometimes. They need to change or they will lag behind."

Besides, Kislyi explained, the company has its hands full expanding World of Tanks, designing World of Battleshipsand running the World of Warplanes beta test.

World of Warplanes will hit this year.

More than 100,000 people applied for the beta test the day it was announced, he said. Another half million have applied since.

"We are currently in closed beta," he said. "In about two months we are shooting for open beta with millions of players participating, many hundreds of thousands at least."

Kislyi said the company is determined to launch the new game before the end of the year.

"We will be following the World of Tanks life," he said. "We know what parameters are important at which life stage."

Then they move on to Battleships, and with each game, the company plans to stay true to its roots.

"We are taking historically accurate, niche-targeted, hardcore games," Kislyi said, "and making them accessible for millions of players." 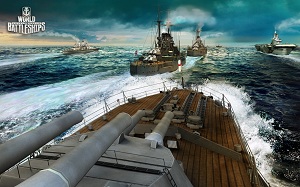 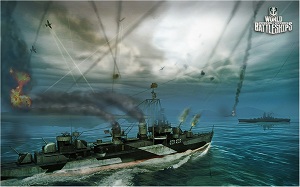 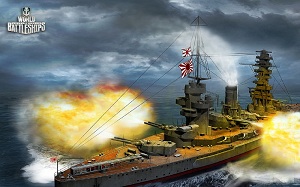