Share All sharing options for: Skylanders action figure compatibility explained with a chart

Although Skylanders: Giants is compatible with all of the figures from Skylanders: Spyro's Adventure, the same isn't true for all of the new figures working with the old game, according to a chart on the official Skylanders website.

Giants, Battle Packs, New Core and Re-Posed characters are incompatible with Skylanders: Spyro's Adventure, as seen in the chart below. 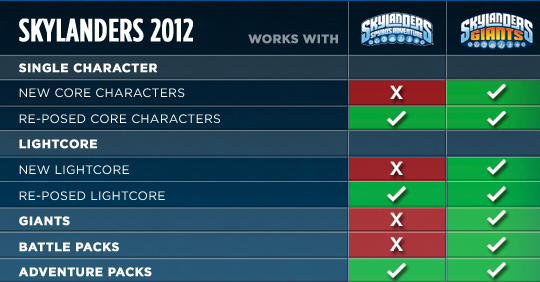 According to One of Swords, although some of the LightCore characters work with Skylanders: Spyro's Adventure, players will have to hook them up to Skylanders: Giants to gets the benefit of the latter game's new blast attack.

Each Skylanders: Giants toy also includes a "Works With" label explaining its compatibility.