The terrain is completely empty and I immediately start filling it with stuff. Long curving roads, residential zones, a wind power plant—I'll make an effort to go green, I think, as I plunk a town hall among the houses. A tinkering melody comes through the speakers and it's as though the game responds to the music; I watch a house spring up out of the ground, construction materials clicking together just as the music builds on itself. I watch as tiny cars zoom in and unstuff themselves with people, and another melody threads through the soundtrack suggesting bustling life and growth.

But without warning a fire breaks out on the other side of town, and people are complaining about unemployment rates. I realize I'm losing money, but if I want to build commercial and industrial areas I'll need more of it first. A tense undertone crops up in the music, and it heightens my anxiety. So I raise taxes and shut down the power plant. I watch as my city's revenue crawls up and up—until I'm reminded by my citizens there is no sewer system, and the sickening sound of sludgy mess fills my ears.

Maxis' reboot of SimCity has thought of almost everything, from various types of roads down to the sewer system. Like its predecessor, the game presents players with a blank slate, a totally empty piece of land, on which to build and govern their own city. Population, revenue, taxes, employment, everything can be monitored as the player-run cities pack up with residents and businesses.

As on-screen events unfold in SimCity, the background music changes. Zooming in adds new instruments to the score, plucky additions heralding specific occurrences. Zooming out present a sweeping and dramatic variant of the score, and each new disaster brings with it a new torrent of soundscapes.

"With this version of SimCity, we definitely wanted to do something new while also paying respect to previous versions," SimCity audio director Kent Jolly told Polygon. "One big influence on the music is minimalism, Philip Glass, Steve Reich, and Terry Riley who are all composers that had a big influence on the music direction of it since SimCity 3000, and continue to in this version." 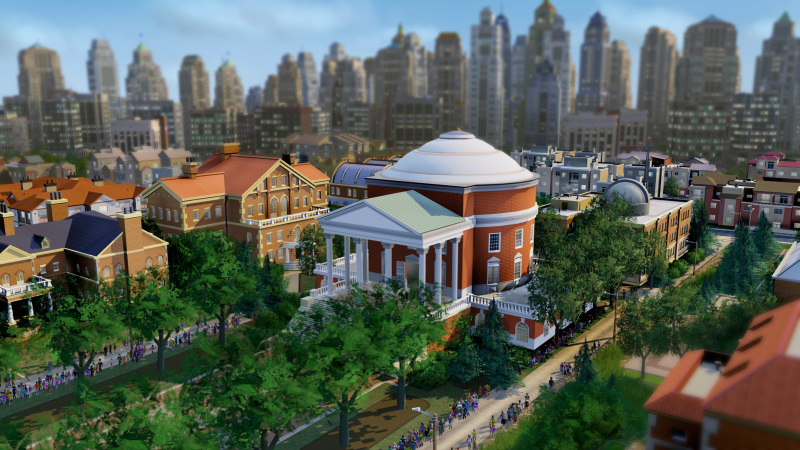 Jolly worked alongside composer Chris Tilton, who has previously written music for a number of games as well as television series Fringe. Tilton said he looked for the untold stories of SimCity as a way to "cement his investment" and create a meaningful score, as well as add a sense of personal drama to the game.

"I'm a big proponent of melodies permeating scores," said Tilton. "Even if they are short, simple motifs rather than drawn out themes, melodies provide not just a hook, but real substance that can be developed and expanded upon. I approached the music like the story of a city. From modest beginnings to big, populous cityscapes."

Additionally, monitoring smaller "data layers" of cities brings out what Jolly calls more "intimate" themes buried in the score. The score is not meant to play all at once, with smaller clips being brought in and out as situations change and players shift to building different things.

"[The music] becomes more textural when you reveal the deeper ‘heavy' data layers," Jolly said . "When you step into the building editor you get a more tinkering kind of score. We really wanted the music to respond to the game in a meaningful way."

Though real life doesn't include background music, giving it a starring role in a life simulation game is the key to tying players' emotions to their game.

"Music with simulation games is not something that you necessarily think a lot about, but I feel like it's important that the music show some sense of drama, and most importantly, have some fun with it," said Tilton. "People often, or at least I do, invent context or little stories in our heads while playing games like these, and I think the music can sometimes subconsciously affect you in one way or the other. In the end, I feel things are always more satisfying when you've had a little music to go along with it.

All of that, of course, comes hand in hand with disasters: Sim towns not only have to worry about tornados and floods, but meteor strikes and UFO visits as well. Maxis has left no stone unturned when it comes to its new town management simulation, where every click unlocks something new to build and inevitably brings some new disaster on your head. 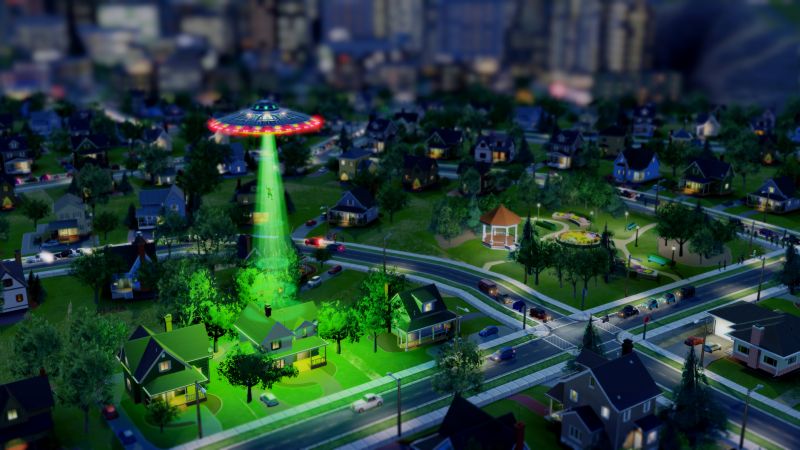 The inclusion of not-so-natural disasters was an interesting choice for a very cut-and-dry-realistic simulation game. When asked why, creative director Ocean Quigley stated that they were included simply because they're fun.

"SimCity is a serious, detailed simulation - but it's never taken itself too seriously," Quigley said. "Yes, we're striving for realistic representations of cities, but oversized disasters that test them in outsized ways are part of the pleasure of the game."

Making resources finite is another first for the series, which will test players' organizational skills and mettle in the face of eminent collapse when these sources begin to run dry. Quigley says this was done to keep players on their toes by encouraging them to take chances and test new strategies.

"We want the game to be dynamic," Quigley said. "If resources were infinite, then there would never be any impetus for change after you'd hit on a winning strategy. Your play experience would stagnate, even as your city was doing fine. By making resource finite, cities that are dependent on particular resource get new challenges to solve as those resources dwindle. Will they get resources from other cities in the region? Will they import it from global markets? Will they switch to another way of making a living? This means that cities will go through different phases as they age, rather than being static."

The melody calms as I zoom out to survey my city, the layers of music falling away to reveal a simple and gentle piece that makes me feel accomplished. Slowly I descend back on my work, checking the population, adjusting taxes, peeking at city hall to see how my mayor is doing. Through each experience another bit it added to the puzzle, both in my experience and in the sounds wafting through the speakers. Playing SimCity feels a lot like being in a television drama, minus the cheesy dialogue.