An Allah reference on the Saudi Arabian stage floor

By Tracey Lien Oct 25, 2012, 6:27am EDT
Source Katsuhiro Harada on Twitter and iSymbiox on Twitter | Via JustPushStart, Original Gamer, and Mike (Polygon reader)

Share All sharing options for: Tekken Tag Tournament 2's Saudi Arabia stage will be changed after players notice placement of 'Allah' on the floor in the game

The developers of Tekken Tag Tournament 2 will be changing the design of the game's Saudi Arabia stage after it was brought to their attention that the word "Allah" (a word for "God" used by Muslims and some Arab Christians) was on the floor of the stage.

A number of the game's players brought the "Allah" placement to the attention of Tekken's game director, Katsuhiro Harada on Twitter. Harada responded with the tweet: "We didn't know that. We will change stage design data as soon as possible. We couldn't read that." 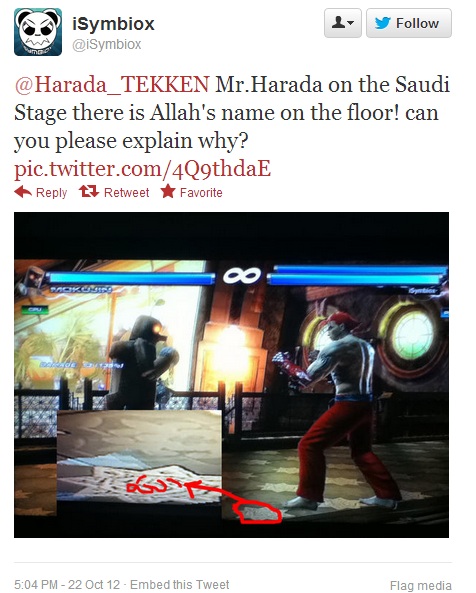 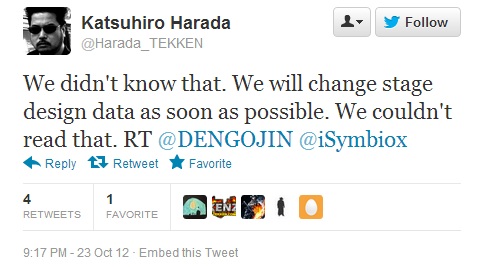 This isn't the first time a video game has contained an "Allah" reference that could potentially offend. Earlier this month the Call of Duty: Modern Warfare 2 map, Favela, was removed from the game following complaints from Muslims over two paintings that hung above a toilet that contained the quote "Allah is beautiful and He loves beauty." Activision said it would return the map once the content had been edited.