If murder simulation is a genre, Hotline Miami is its new exemplar.

The top-down action game coerces its players to take life in the quickest, ugliest and most ironic ways. It's caustic. It's filthy. It's one of the best arguments against casual violence in video games.

It's also one of the most important games this fall.

All of Hotline Miami's bloodshed is bound in a pulpy crime story. A gang of animal mask-wearing criminals forces a street punk to become their assassin. They leave thinly veiled assassination assignments on his answering machine, sending him onto the streets of 1989 Miami.

This isn't the story of a cold-blooded murderer. Guilt manifests itself mentally and physically. The world of Hotline Miami is dark as squid ink, and bolstered by a crunchy synth soundtrack and wavy neon graphics that combine to form an OK substitute for a bad LSD trip.

The set dressing of the man's apartment is a particularly deft touch. The accumulation of trash and unexpected house guests establishes Hotline Miami's story more succinctly than would cutscenes or lengthy patches of dialogue. As his life goes, so goes his apartment.

Killing — aggressive and violent — is the core of the game. The player can murder with a number of weapons, ranging from the traditional (pistols, machine guns) to the improvised (a pan full of boiling water). Points are rewarded and multiplied by stringing together assassinations and mixing up weapons. Earning the most points requires the player to do the most awful things, turning a high score into a symbol of how depravedly its players behave. 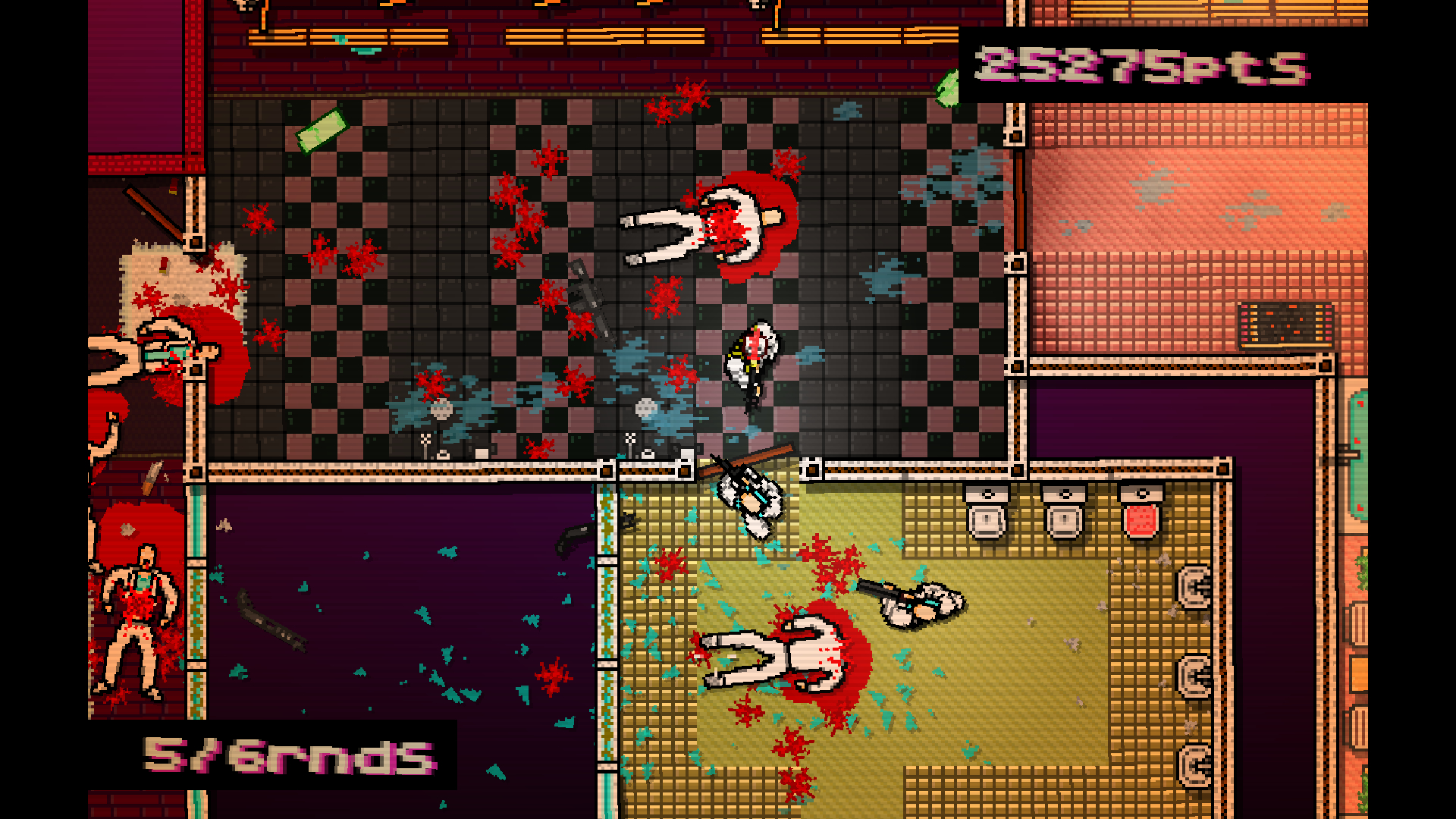 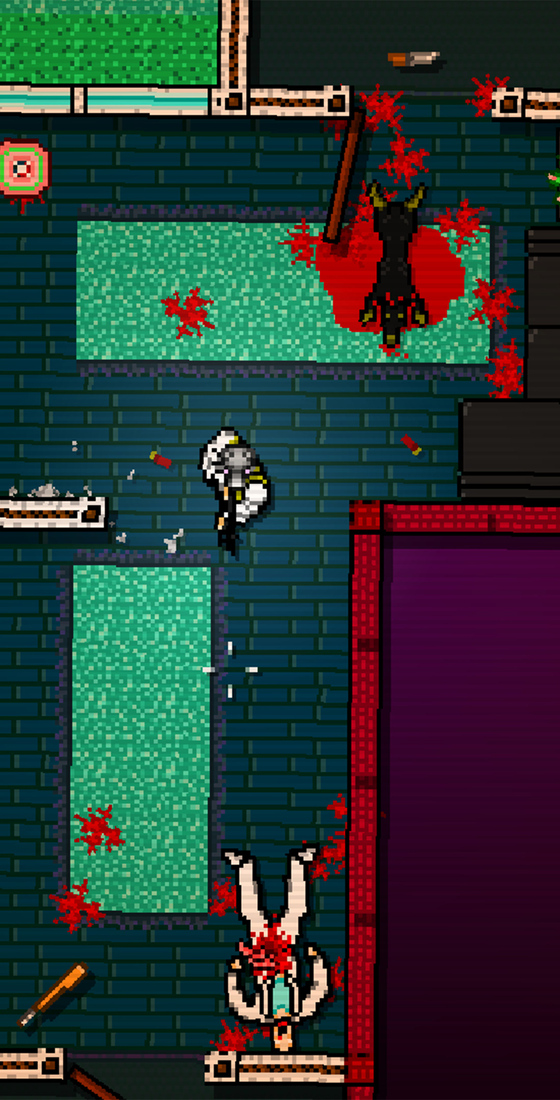 Masks like those worn by your captors can be found or earned. Each grants a special ability — the owl mask makes hidden objects easier to find, for example, and the unicorn mask silences weapons. They are replay tools, most of which changed the way I approached a challenge. I found myself replaying missions to see how they handled with a certain buff or bonus weapon.

Slamming a door into an unsuspecting enemy will stun them. You may then use the dazed goon as a hostage / living shield, the closest the game comes to a defensive maneuver. Defense rarely works. The "hero" is as vulnerable as his enemies, succumbing to a single strike.

And so Hotline Miami is a mix of trial-and-error with run-and-gun. Test a strategy, die and apply what you learned. Never stop moving. You never feel safe; it turns you into a neurotic, mouse-smashing maniac. The second I died, I was hungry to start again. The repetition doesn't feel like a chore because of the quick retry system. Killing in Hotline Miami is more like a sport.

If anything spoils Hotline Miami, it's how loosely assembled it feels. Enemy AI can be borderline vegetative, and bugs crashed my game a couple of times. And then there's the late-game stealth mission, which, while narratively powerful, is a missed beat in an otherwise adroitly tempoed campaign.

Murder is messy; you leave behind maimed corpses and Pollock-esque spatterings of blood. Bodies never disappear, a visual decision the developer underlines, bolds and highlights by making players hike through their destruction at the end of each stage. To continue with the painter metaphor: you enter a Thomas Kinkade, you exit a Gustave Doré.

Playing Hotline Miami made me feel like an empowered homicidal maniac. I punched open the front door, knocked down the first guard, stole his knife and threw it into his colleague's neck. Before the second wave of guards could step out of the patrol room, I'd sliced them in half with a samurai sword stored in the maintenance closet. I ran into a bathroom, grabbed a man from the urinal mid-stream and tossed him to the floor, printing his face in the decorative tiles. Three guards approached the room, but they didn't know I'd trained a shotgun on the doorknob, just waiting for them to enter. And when they did...

Non-violent encounters bookend missions in the world we know: The main character tries to go about his life — renting videos, visiting bars, grabbing pizza — but the dissonance is disorienting for the player and the character. It's refreshing to have a protagonist react believably to the absurdity and tragedy of his behavior.

Hotline Miami is violent for a reason

As the game approached its climax, I found myself asking, Why? Why is the world so inescapably violent and angry?

Hotline Miami admirably does its best to provide an answer. You'll find it buried deep beneath the game's surface â figuratively and literally. It has more to say about our fascination with violence in games than the lion's share of its competition. That the killing is fun made me feel all the worse. Which was the point. Hotline Miami is exceptional not because it's violent, but because it's violent for a reason.