By Griffin McElroy@griffinmcelroy Oct 26, 2012, 9:00am EDT
Source Zojoi on Kickstarter

Shadowgate is being remade and "re-imagined" for PC, Mac and tablets by developer Zojoi, who is seeking to fund the game's development on a Kickstarter page which launched today.

The remake, which was quietly announced on Zojoi's official site this past summer, is not a direct port of the original adventure game. It features a number of new puzzles and rooms for the player to explore, and almost certainly be killed by. The 8-bit halls of Castle Shadowgate have been revamped with animated, high resolution artwork, and the memorable soundtrack from the NES version of the game is now presented in a fully orchestrated score — though slaves to nostalgia can listen to the original soundtrack while playing, as well.

In an interview with Polygon, Zojoi co-founder (and former designer at ICOM Simulations, creators of all the MacVenture titles) David Marsh explained some of the enhancements which will be added to the updated Shadowgate. Rooms will be presented in full-screen, as will the player's inventory. A hint system — which only appeared in the NES version of Shadowgate — is being considered in the form of a talking skull named Yorick, whose suggestions can scale based on how difficult the player wants the game's puzzles to be. Puzzles that the developers found "too straightforward or random" will be removed entirely, replaced by entirely new brainteasers to tackle.

Other than that, it's the same Shadowgate formula that crossed over a dozen platforms in the 80s and 90s: Players move from room to room, scouring a castle in first-person view, searching for items to help survive the traps awaiting them, and dethrone the Warlock Lord waiting in the final chamber. 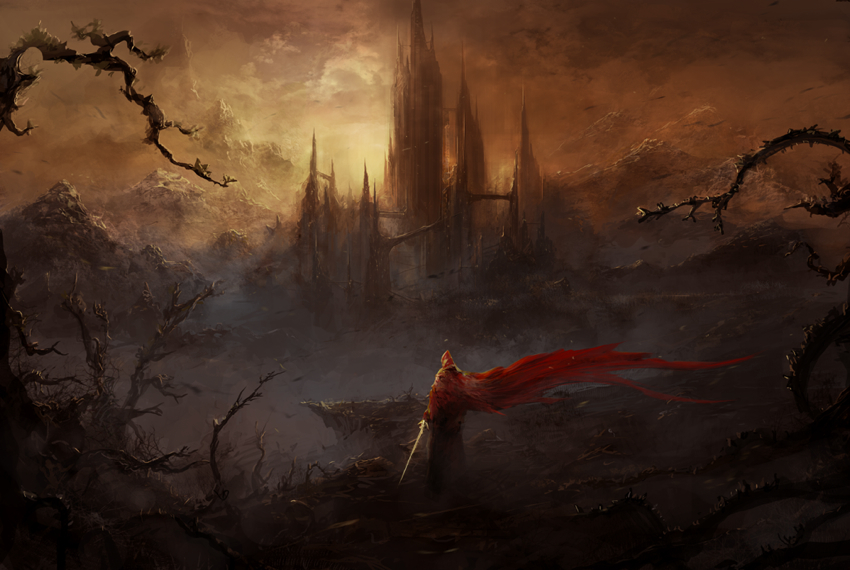 One iconic element of Shadowgate — and all the MacVenture titles, for that matter — that won't be changing is the punishing, overarching time limit that dictates the pace of the game. In Shadowgate, a player must have a lit torch on their person at all times. If the torch goes out, and the player doesn't have any in their inventory, they stumble in the darkness, and break their neck. Torches are a finite resource in the castle, and once they're gone, the player's out of luck.

"We're still planning on having that," Marsh said. "One of the things that players always talked about was torches, always having them available, and death, which was around every corner in Shadowgate. Those are things that we want. We're kind of excited about this one, because we've learned a ton in the past 20 years about balancing the torches out a bit better."

"We're not asking for a million dollars."

Other additions Marsh hopes to include as possible stretch goals for the Kickstarter include interstitial cutscenes which could add a more visual element to the game's plethora of fatal mistakes. Death in the original Shadowgate was often left with a very colorful text description, but (aside from an objectively horrifying image of a grinning Grim Reaper) left the visuals up to the player's imagination. Marsh pointed to the death sequences in Dragon's Lair as the type of cutscenes he'd like to include in the remake, if funding allows.

Cutscenes could also expand the backstory of Shadowgate, Marsh said, which was robust during the development of the game, but boiled down to just a few short sentences in the finished product.

"You were told at the beginning of the game that you were teleported here, and then off you go," Marsh said. "So we've been working on a script that has a lot more backstory about what it is, and why you're here, what it is you're trying to accomplish. Who was the Warlock Lord, how is he related to the rest of the wizards in the Circle of Twelve, what was the deal behind how he defected? We want to give more backstory there."

Zojoi is seeking $120,000 to fund development on the Shadowgate remake; a fraction of some of the higher-profile games that have won over audiences (and millions of dollars) on the crowd-funding platform.

"We're not asking for a million dollars," Marsh said. "We do realize we're a small company; we're going to make a great game, but going after that kind of money isn't the right thing for us for this project."

Despite the relatively small ask, Marsh said the team isn't counting its chickens before they hatch. After all, Zojoi took to Kickstarter earlier this year to seek funds to port the Sherlock Holmes Consulting Detective series of full-motion video adventure games to Mac and PC. The drive sought only $55,000, and only brought in $17,430 in donations.

"We're a small company, and we've had to get some other funding to complete those," Marsh said. "We're just glad that, obviously after we weren't able to make the funding for it, that we were still able to make the games. I'm just glad to get them out, we've learned a ton as a new company. And we hope to apply all those things we learned to the Shadowgate campaign."

Zojoi is targeting a November 2013 release for its remake of Shadowgate on PC and Mac, with iPad and Android tablet ports to follow. Check out the gallery below for a few exclusive screenshots above, and stay tuned for more from our interview with Marsh, including details on the fate of the other games in the MacVenture series.

The author of this article was a backer for the Shadowgate Kickstarter campaign, at the $60 pledge level. This backing took place before Polygon’s ethics policy regarding Kickstarter was updated. You can read our ethics policy here.