Skylanders Giants is rooted in the Saturday morning cartoons of the 80s.

Sure, it’s cartoony. But it’s more than that. In 1984 the United States Federal Trade Commission ceased regulations that prohibited the association of children’s television with toys and advertising, which led to, among other things, Transformers and G.I. Joe. The cartoon became a means of selling toys to kids. Skylanders Giants isn’t much different. It exists as a means of introducing and selling more and more Skylanders.

But just as cartoons’ primary motivation as merchandisers didn’t make them any less fun, Skylanders Giants is more than just a commercial. Developer Toys for Bob’s sequel to last fall’s Skylanders: Spyro’s Adventure isn’t a perfect game, with a bizarre difficulty curve that seems particularly hinged around retail considerations, but it’s smartly written and cleverly designed around its toy-based gimmick. 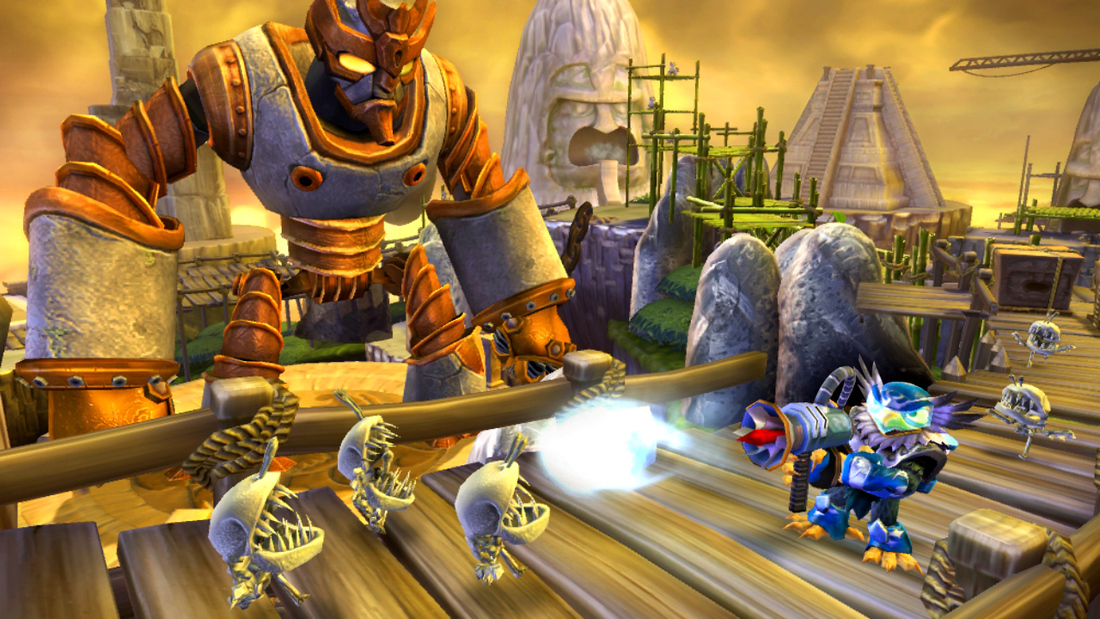 Skylanders Giants takes place in Skylands, where the formerly-banished mini-conqueror Kaos has latched on to a new plan to rule the world — to find dormant robot conquerors the Arkeyans and make their power his. It’s the Skylanders job to stop him, along with whatever help and friends they can find along the way.

Playing Skylanders Giants tends toward the simple, but it never feels dumb. Some characters are melee focused, and others rely on projectiles, but they all do it from an overhead perspective that emphasizes exploration over tricky platforming. There are block puzzles and jump-pads though, for an action/sort-of-platformer feel.

Everything in Skylanders is designed around the figures themselves. Like its predecessor, Skylanders Giants uses a "Portal of Power" connected to your console. Giants’ starter pack comes with three Skylanders figurines — two regular sized and one of the new titular Giants, which are, you know, bigger. When you place one of these figures on the Portal, they materialize with an unskippable intro in the game world for you to control.

Each Skylander starts with a couple of attacks that can be upgraded over time with money earned by smashing objects and enemies around Skylands, and defeating enemies yields experience orbs that level up your Skylander. Eventually, you’ll be able to buy new abilities for your Skylander — assuming, of course, that you’ve found the appropriate tokens scattered around the game that allow you to buy that upgrade. 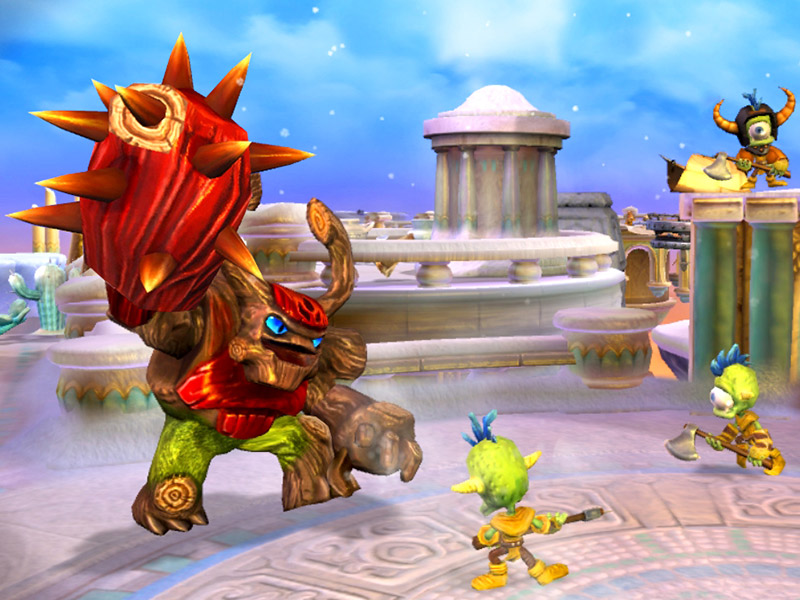 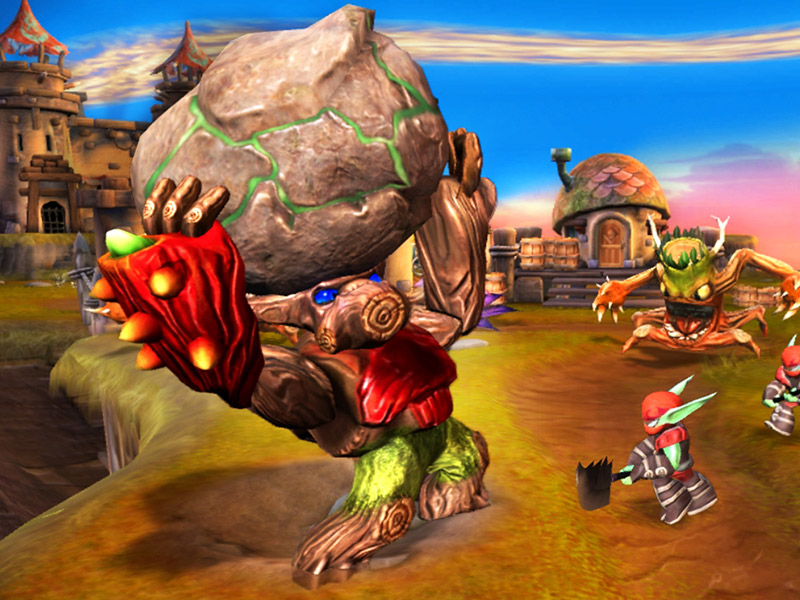 This is one of the two ways Skylanders Giants gets you. Savvy explorers will constantly find upgrade tokens in out of the way places. But nobody said the token you'll find is for a Skylander you own. If you find a token for a character you've never used, Skylanders Giants offers to show a preview of that character. I'll rephrase that: Skylanders Giants shows you commercials in-game for toys you don't have.

And it works. It often made me wish I had this or that Skylander to throw into the game to see how differently they played, given how differently the three included characters, Cynder, Jet-vac and Tree Rex play from one another, and how they each evolved.

Whether you find all those tokens or all of Skylanders Giant's myriad other secrets depends on whether you have a Skylander who can actually access every part of every level. Welcome to the other main way Toys for Bob gets you. Each character has a particular elemental affinity - air, water, undead, fire, magic, earth, tech, and life - and each level has specific areas that are only accessible by a particular element. And I can guarantee you that you want whatever is in those areas. It's diabolical genius.

There are other ways consumerism plays into Skylanders Giants - if a character loses all of their health, they'll have to "rest" until the level in question is complete. For the first eight chapters or so, this isn't an issue, but around level nine, I was scrambling and down to my last Skylander more often than I'd like to admit. 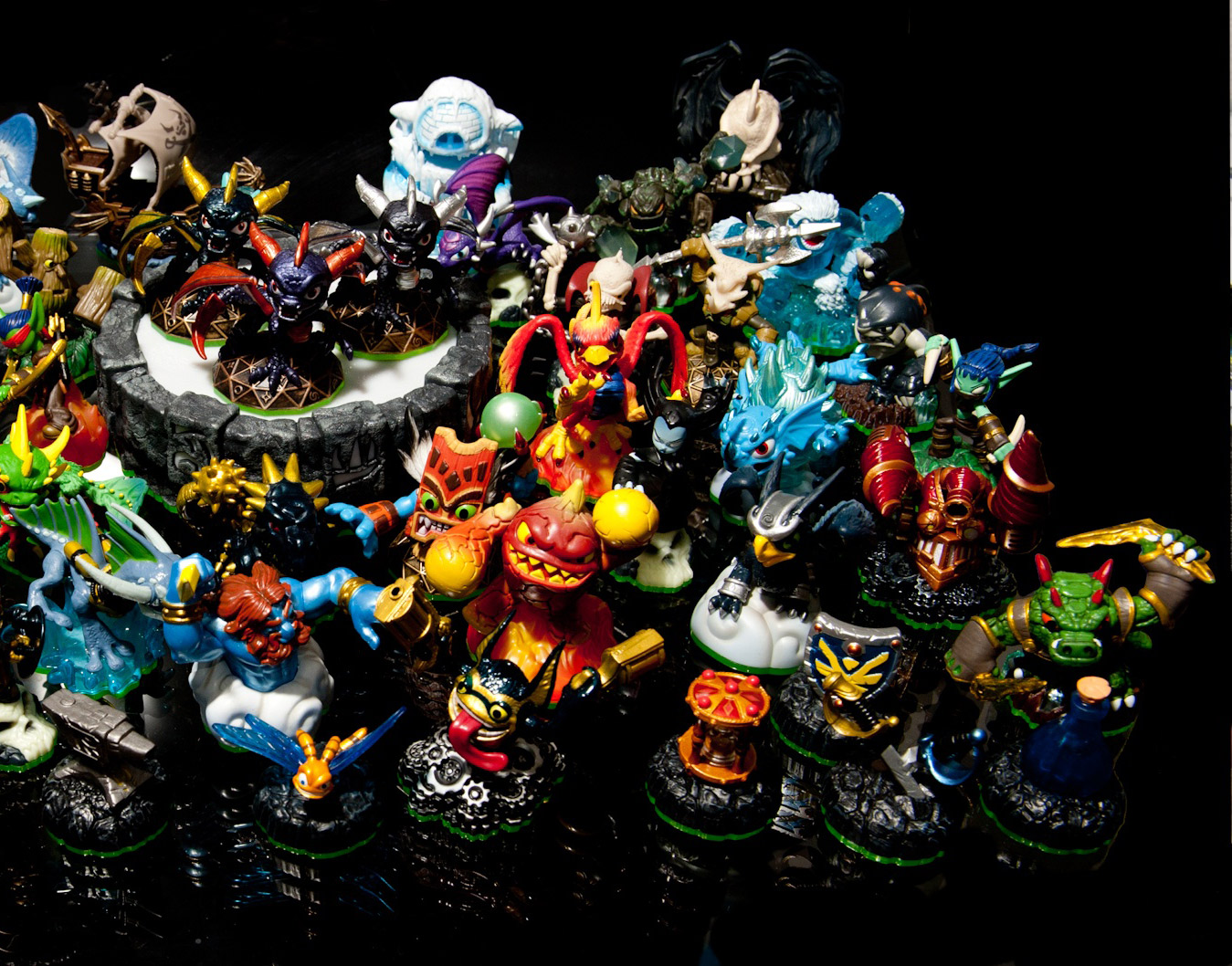 From Spyro to Giants

Skylanders Giants isn't that different from its predecessor, but there are still some additions in store, and some changes for figures carried over from the last game. For Skylanders veterans, figures bought before will appear in Giants with their levels and hats intact and ready to go, with a new level cap of 15 over the previous 10. Co-operative play also returns, along with a competitive battle arena.

The "Giants" are new, and you will need at least one to make your way through Skylanders Giants - go figure. But every version of Skylanders Giants available at retail includes Tree Rex, one of the titular new Skylanders. Meanwhile, each figure now engages in their own challenge quests, similar to challenges in multiplayer-focused first-person shooters. These range from "kill a thousand monsters" to "win a certain number of Skystones matches."

This did have the side effect of forcing me to really figure out which Skylanders I had were right for each situation. Aside from an affinity bonus that gives certain elemental types a damage and life boost in specific areas, different sections favor faster characters for hazards or more powerful characters against bulkier enemy types. Skylanders Giants actually puts the variety inherent in their toy-driven philosophy to good use, making you switch characters regularly to successfully tackle levels later on, though by the third hour or so, I was begging for a way to skip the character intros.

The thing about Skylanders Giants is that all of its elements - sans that damned character intro thing - are tied together so well that I didn't have much time to give consideration to the merchandising loop I was caught in. I wasn't thinking about the figures I didn't have. I was thinking of the figures I wanted. Watching each character improve and grow more powerful was rewarding, even if the only equipment they could use were silly hats. The Giants and their ability to break down certain walls and access new secret areas didn't feel crass, they added more complexity to a pretty complicated collection of systems.

The only real complaint I have is that Giants is by necessity designed as a series of tasks to be repeated, over and over, making levels into something of a grind. Since each Skylander is leveled up separately - and money collected is not shared between characters - levels feel designed to be played over and over again. While each stage does have its own quirks, there are few moments that feel particularly different later on, not counting one particularly bizarre, old-school top-down shooter-that-I-won't-mention-to-keep-from-ruining-the-surprise influenced mechanic introduced in the last third of Skylanders Giants.

If more kids' games were like Skylanders Giants, the world would be a better place

Grinding notwithstanding, the world would be a better place if more games aimed at kids were like Skylanders Giants. While the retail element is a justifiable red-flag, as an ecosystem for toys and play, Skylanders Giants is well-written, well-designed and engaging stuff. It's a game that parents and kids should be able to agree on - assuming the parents don't level up Tree Rex too much when their kids aren't looking.