Earlier this month, in a small ballroom at the University of Southern California, a group of artists, designers, engineers and entertainers gathered to discuss the future of interactive gaming. Over the course of two days, they showed the latest in creative cutting-edge technology powering "digital out-of-home entertainment" — a blend of augmented reality, mobile gaming experiences, digital domes and games involving 100 players or more.

At the inaugural DNA U.S. Conference, creators shared game experiences they labeled Arcade 2.0 or the Next-Generation Arcade, games that ranged in size from small cellphone apps to games played inside a movie theater to massive theme park experiences.

Other games were played with spotlights and water fountains or inside immersive domes with special projectors capable of displaying games on spherical ceilings.

The goal of the DNA Conference was to focus on emerging trends in "interactive frontiers in leisure facilities," where gaming experiences are migrating beyond the home, beyond traditional arcades.

Those types of multiplayer, arcade-style entertainment experiences, ones "unachievable at home," says Kevin Williams, conference founder and co-author of The Immersive Frontier: Defining Interactivity in the Public Arena, are at the heart of the DNA conference.

One such experience is wallFour's Renga, a "theatrical co-op" game designed to be played in movie theaters by up to 100 players, each wielding a laser pointer. Light sources in hand, players must work together to build and protect a space ship projected on a silver screen. Over the past year, Renga has been demonstrated and played at the Game Developers Conference, SXSW, Indiecade and the GameCity Festival. 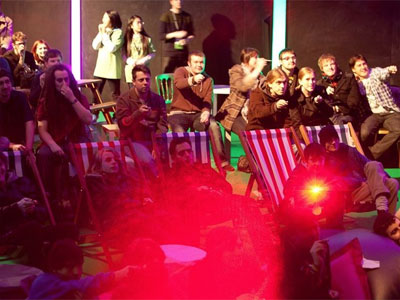 "We powerfully believe in the importance of live social interaction, and neither of us is particularly 'into' the social web and online spaces generally," Russell told Polygon. He says Renga was in part inspired by the work of ProjectorGames, run by FortressCraft creator Adam Sawkins. "The atmosphere around these games fascinated us, especially the moments where the whole crowd would get behind a shared goal, like seeing one last frog make it across the road in a 50-player Frogger clone."

"The combination of seeing crowd games and laser interaction just got us thinking," Russell said. "That was nearly two years ago and was the real beginning of what became wallFour and gave rise to Renga." Russell says Renga has been met with both open arms and "suspicion" by some players at the diverse festivals at which it appears, but that "that people get very excited by it, want to tell their friends about it, but then struggle to explain in words what it is.

"In some ways this is the very same feeling that we have!"

Theater screens and projectors are the medium for other DNA Conference speakers like TimePlay, a company that makes mobile applications for iOS and Android playable by large groups in movie theaters, and Vortex Immersion, which specializes in cinematic immersive displays, inspired by military simulations, in dome structures. Its technology powered the Kinect-powered NFL Play60 Fan Dome at Super Bowl XLVI. The company is currently in the process of planning a massive entertainment complex that combines cinema, video games, next-generation arcade games and live performances. 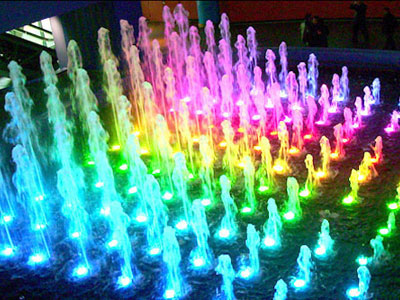 Thinkwell Group works in spaces larger than movie theaters. It designs theme parks and attractions, including The Making of Harry Potter at Warner Bros. Studio London, and interactive museum exhibits, like the Fernbank Nature Museum, a digital and physical attraction designed to teach children about nature. One of Thinkwell's DNA Conference highlights was a $7 million water fountain designed for Caesars Atlantic City that does more than just delight crowds with lighting and water choreography; it also plays games.

Craig Hanna, chief creative officer at Thinkwell, says the design company built interactive games into its water fountain show at Caesars, a component not part of the original design. Using a combination of 150 fountain nozzles, colored LED lights and motion detection equipment, players can dance to interact with "The Show at the Pier" in individual and group games.

"Because the interactive component of the fountain was such a 'science experiment' we didn't want to be contractually obligated to deliver it, in case it didn't work," Hanna tells Polygon. "Since the client wanted a 'fountain show' we delivered that, then surprised the client when the interactive element worked (and worked amazingly!) and then we gave them a site license for the technology we developed."

Thinkwell works at theme-parked sized scope. The company designed a fully enclosed ski resort in the middle of Dubai and the dinosaur-themed Jurassic Dream park set to open in China in 2013.

A DNA Conference company working on a smaller scale — but in overall concept, much larger - is Ogmento, an augmented reality game developer formed in 2009. Ogmento designs its AR games, like promotional tie-ins Paranormal Activity: Sanctuary and NBA King of the Court, to be "marker-free." Co-founder Brian Selzer tells Polygon "the world itself is the final gaming platform" and "the most compelling AR experiences would be triggered off of the people, places and things in a players natural surroundings."

People play Ogmento's iOS and Android games by capturing real-world turf and taking on quests that blend reality with virtuality. The developer's Paranormal Activity application set its virtual scavenger hunts in cemeteries, hospitals and other "haunted locations." The company is set to announce a new augmented reality app tied to a major video game soon.

Selzer says his company's games are able to complement the larger games other digital out-of-home entertainment creators are building.

"We are focused on the personal mobile device allowing users to turn everyday real world locations into entertainment experiences," Selzer tells Polygon. Combined with holographic displays, projection mapping and computer vision, "We can provide a second screen to their main event... a companion piece."

Currently, many of the game experiences on display at DNA Conference lean toward the commercial. They're playable in theme parks, casinos, massive cinema chains and packed festivals. They are designed to be funded and to advertise, to appeal to audiences already actively engaged or - in some cases - complacent, seated, trapped while waiting for a film to start. Marketing, rather than artistry, feels more dominant.

Adam Russell of wallFour sees it as a step in evolving out-of-home entertainment.

"Any new medium such as films, or videogames was at some point perceived as an attention-grabbing technological gimmick," says Russell. "However all media have the potential to provide intrinsically-motivating experiences, and this is a source of real business value. The film industry was built on this truth. We believe the videogames industry was too.

"We're trying to create this kind of value in out-of-home gaming, a sector which we believe can be both economically sustainable and culturally significant."