A gaming arcade machine was pushed and played through Oakland's riotous Occupy march over the weekend amidst the turmoil of battling police and protesters.

The idea, says cabinet co-creator Alex Kerfoot, is that an arcade game will help build a sense of community among the Occupy movement and increase social engagement among protesters.

The OAK-U-TRON 201X constructed by a collective of game developers to be played by the "99 percent" during protests, marches and downtime, has the familiar shape of the arcade cabinet. It houses a laptop computer, a 19-inch LCD display and, for now, a single Occupy-themed game designed to be played by up to 50 people.

The creation is mobile, resting on a set of four wheels and housing a built-in power supply that can deliver four to five hours of gaming to protesters on the go.

Kerfoot, a former Electronic Arts software engineer, says he got involved with the Occupy Oakland movement after coming across the protesters' encampment on his way home from work last year.

He says the movement's inclusive approach to addressing systemic issues like hunger and homelessness drew him to the effort. When he heard that the Occupy Oakland movement planned to march through the city and occupy a building to turn it into a social center with a rec room, he thought he could help out by providing a gaming cabinet. 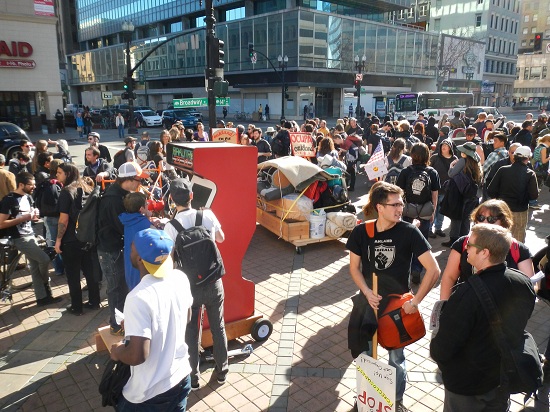 Kerfoot and cabinet collaborator Mars Jokela turned to video game designer and critic Anna Anthropy to create a special game for the cabinet.

Anthropy, a self-described "pixel provocateur," says that games can be an important part of any social movement.

"Games are social events and social tools," she said. "A group of kids may not know each other very well, but they can play a big game of tag and connect together that way. The rules of games, the spaces they occupy, they destroy social barriers and connect people. That's why a social center like the new Occupy space needs an arcade, because the movement is about nothing if not overcoming our differences and recognizing our common struggle."

In Keep Me Occupied, the game Anthropy designed for the arcade cabinet, teams of two players need to work together for a minute at a time to work their way up a tower. When the time runs out, a new set of two players take over the game, controlling two new characters. Up to 50 players end up working together this way to see how high they can get in the game.

Anthropy and the others behind the cabinet hope to eventually load more indie games onto the machine.

"Games bring people together," cabinet co-creator Jokela said. "They give people common experiences and stories to share. They transport people to other worlds where the rules are different, and where the rules can be changed. The Occupy movement is about improving people's lives and effecting change in the real world in the face of incredible obstacles - so I think there's something a little poetic about giving the Occupy Oakland community center a machine that gives people control over their own fates (at least within the context of a game)."

During the Saturday march, the cabinet rolled its way along nearly two and a half miles of Oakland streets and sidewalks. The cabinet's surreptitious journey came to an abrupt halt as police and protesters began to clash. Kerfoot says the machine was whisked away to a secure location as things turned violent. A team pushed the cabinet to the Occupy movement's sound truck that was staged behind the city's convention center.

The march devolved into a clash between rock-throwing protesters and police in riot gear using teargas. An estimated 400 people were arrested, none of whom were the cabinet makers.

"The OAK-U-TRON 201X was a definitive success," Kerfoot told me following the protest, "It worked and people loved it, and were amazed by it. It made the journey through streets, up ramps, down elevators, and over bridges to just outside its intended location."

Good Game is an internationally syndicated weekly news and opinion column about the big stories of the week in the gaming industry and its bigger impact on things to come.Brian Crecente is a founding editor News Editor of Polygon.

Photos by Kerfoot and Shaun Roberts.