Kinect owners have the option to command Easy Drive with verbal cues, but shouting "next" a number of times to change my tires never felt less than crazy

A good racing game is able to produce in the most sedentary of us a believable sense of speed.

Need for Speed Most Wanted-developer Criterion Games are masters of speed (a word I desperately don't want to use, but it fits). It understands that said speed should persist beyond the driver's seat. The game shouldn't step on the brakes.

In previous games, Criterion turned cities into race tracks, and friends into persistent competitors. In Need for Speed Most Wanted, the developer has further streamlined the structure of a racing game to maintain momentum, though it occasionally takes a wrong turn. 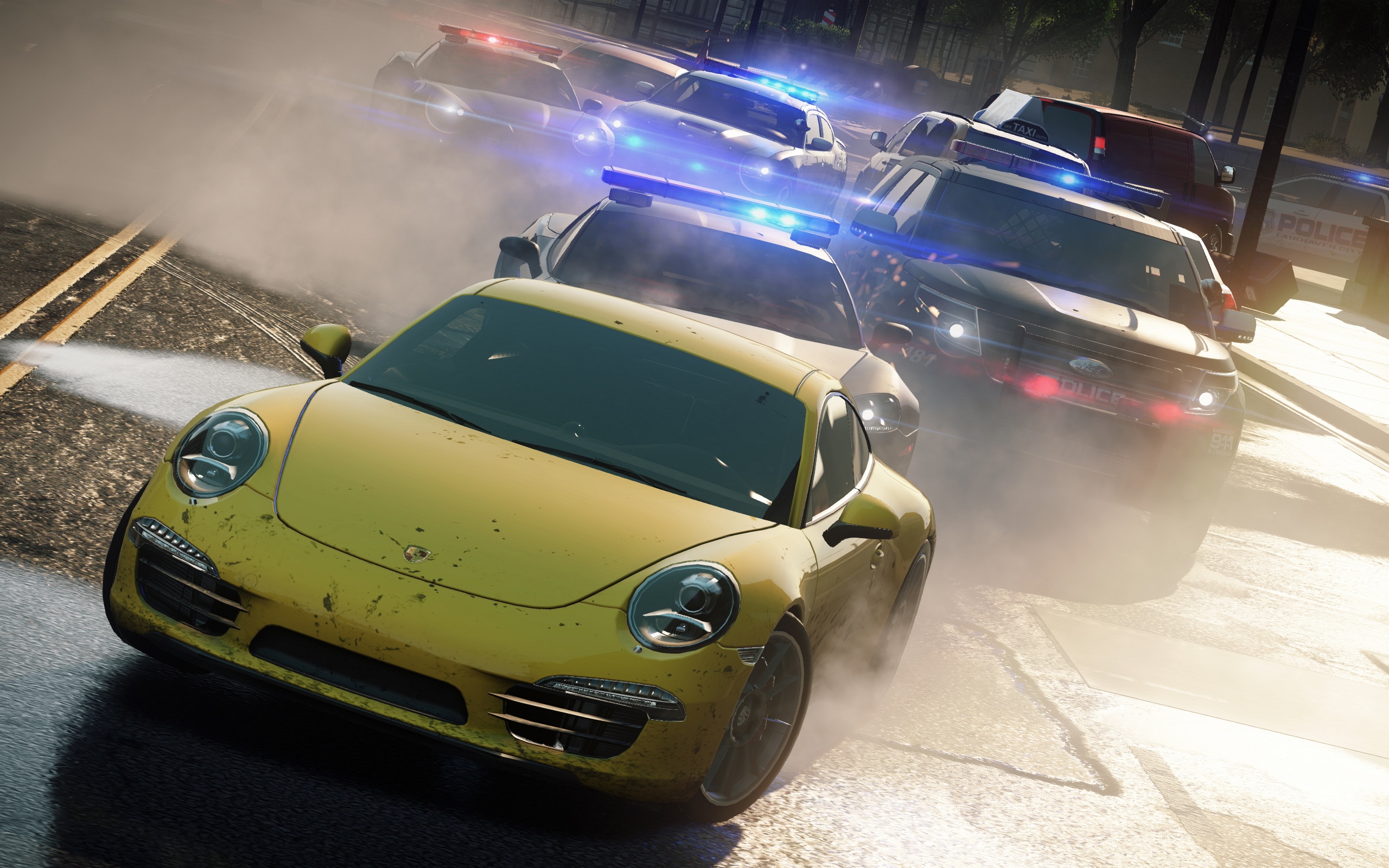 Criterion is determined to keep Need for Speed Most Wanted on the road. Races, cars, upgrades, objectives and multiplayer options can be accessed from the Easy Drive menu. A drop-down, Easy Drive sits in the right-hand corner and can be navigated via the D-pad.

Negotiating Easy Drive is like texting while driving. I understand the practical appeal of accomplishing an inconsequential task while going somewhere faster than any land mammal ever has before, but it usually ends in a humiliating car wreck. In practice, I'd race against time to select a new vehicle mod from the Easy Drive menu before my Lamborghini careened into a parked car.

To get players in fast cars quickly, Criterion hid nearly every unlockable vehicle throughout the open world of Fairhaven. Ranging from Ford trucks to McLaren sports cars, these are like Easter eggs — find them, and they're yours. With the tap of the button, you can hop behind the wheel and drive away, abandoning your old ride to wither under the sun like some crummy locust shell. I couldn't re-enter a car I'd left without warping to where I originally found it, even if it were sitting inches away.

The progression of car collecting is fast, at least at first. While searching out the last twenty-some vehicles, I caught myself slowly patrolling dark alleys and abandoned factories like a two-bit drug dealer. I admit that had its own charm.

Every car and truck collected is accessible from the Easy Drive menu. Criterion has emphasized the ability to switch seamlessly from one car to the next, which is possible in multiplayer. That promise is stretched in single-player. Choosing a new car from Easy Drive warps you to one of its few parking places in Fairhaven. You might be in front of the perfect jump, but the Audi you'd need to make it is 4 miles away, which saps all of the momentum Need for Speed Most Wanted built up to that point.

Each car in the single-player mode is limited to a handful of specific races, which start when you arrive at a predetermined point somewhere in Fairhaven. You'll need to do this at least once before you can select the quick start option for that race from Easy Drive. Too much of the first half of my game was spent cruising from one end of Fairhaven to the next. I hesitated to switch cars, knowing I'd warp to where I came from and would be forced to choose a different race altogether. I understand that Criterion would like players to see its beautiful fictional city, to learn its streets, but these restrictions conflict with the game's ethos of Do what you want, where you want. 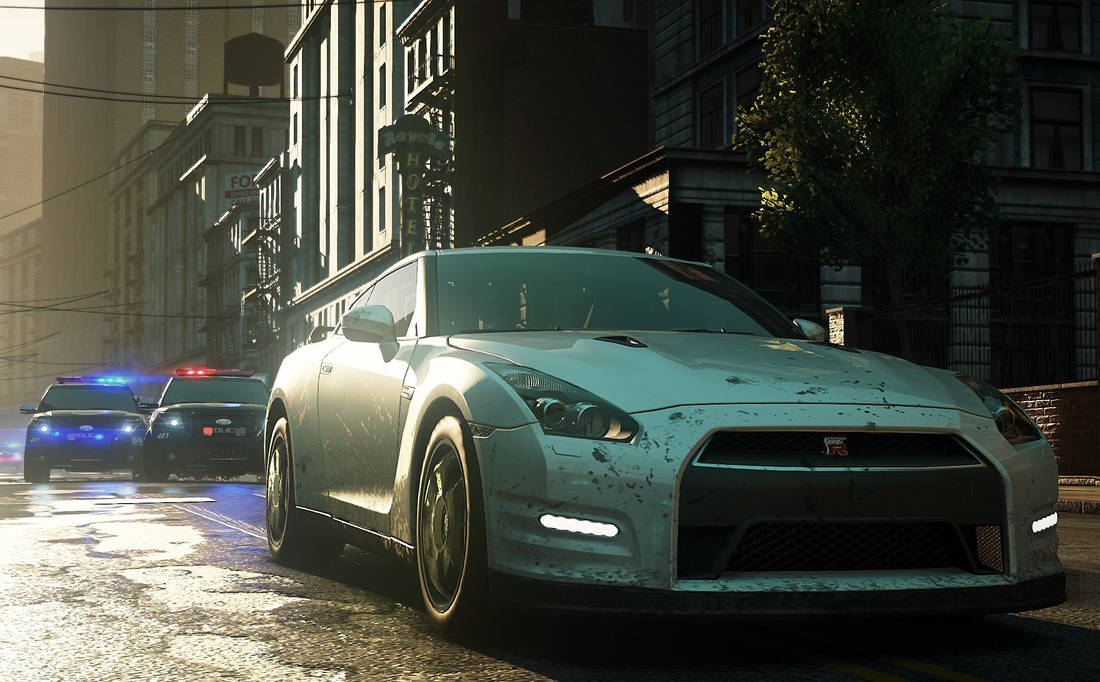 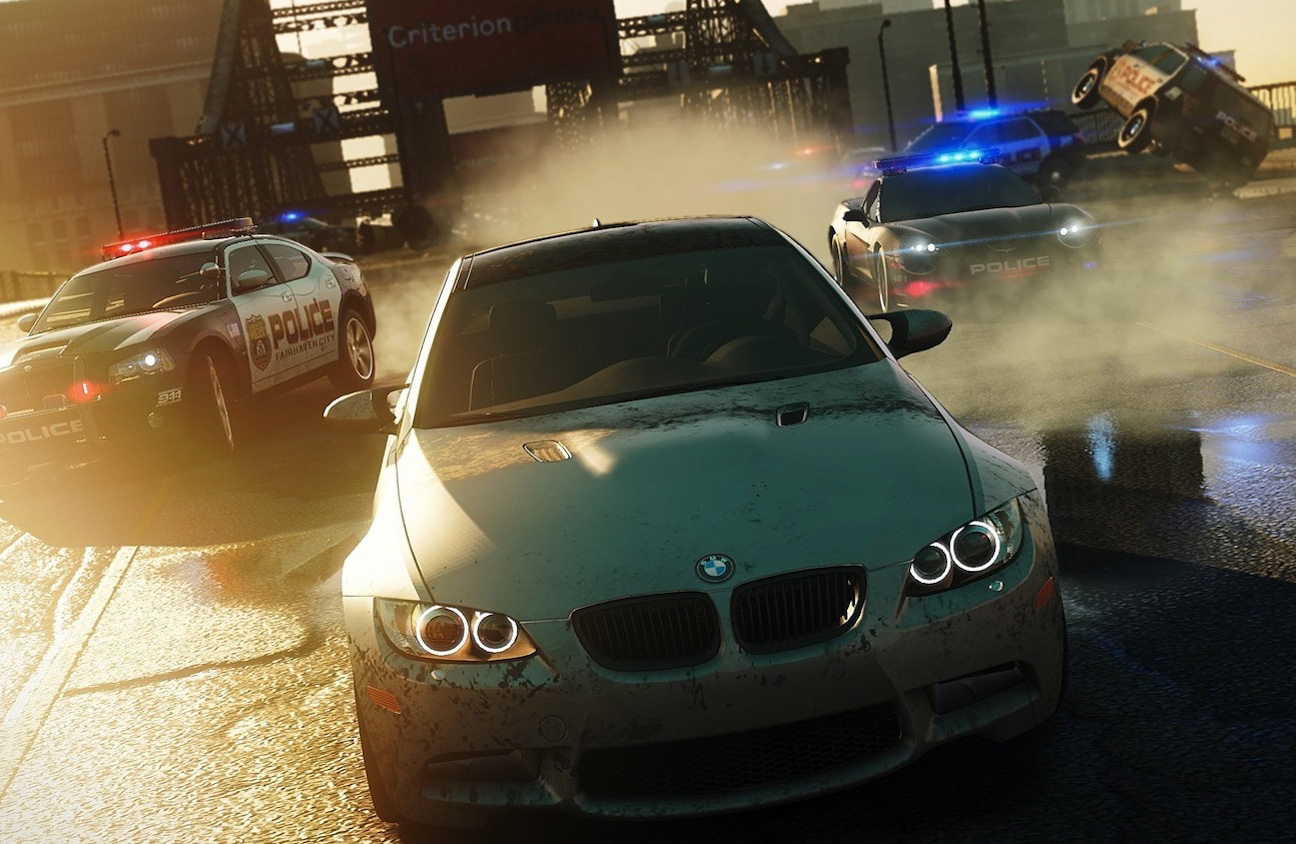 Kinect owners have the option to command Easy Drive with verbal cues, but shouting "next" a number of times to change my tires never felt less than crazy. Also, and I believe this is a Kinect-related problem, random words spoken in my apartment seemed to send the game to its pause menu - words like "tempeh," "pie," "what" and "Matt." When one such error interrupted a late-game race, I unplugged the device.

The most irritating design choice pertains to car mods. For the most part, mods are a great addition to Most Wanted. Achieving a minimum place in a challenge unlocks mods for the vehicle driven. Mods can improve the tires, chassis and other aspects of their respective cars. The nitrous boost is the most important mod, and a staple of Criterion racing games. But I had to unlock the nitrous boost by finishing first in a particular race — for every single car. While I had the option to choose other races in whichever order I wanted, only one sensible choice existed: the nitrous race first, everything else second.

It's dumbfounding that all of Need for Speed Most Wanted's ailments are remedied in its excellent multiplayer mode. Cars can be switched on the spot, no warping required. Vehicles start with the nitrous boost unlocked and, barring very minimal restrictions, nearly every car can compete in every event. Multiplayer party hosts can even create event playlists, which allow them to choose from dozens of events, activities and races from an overworld map. 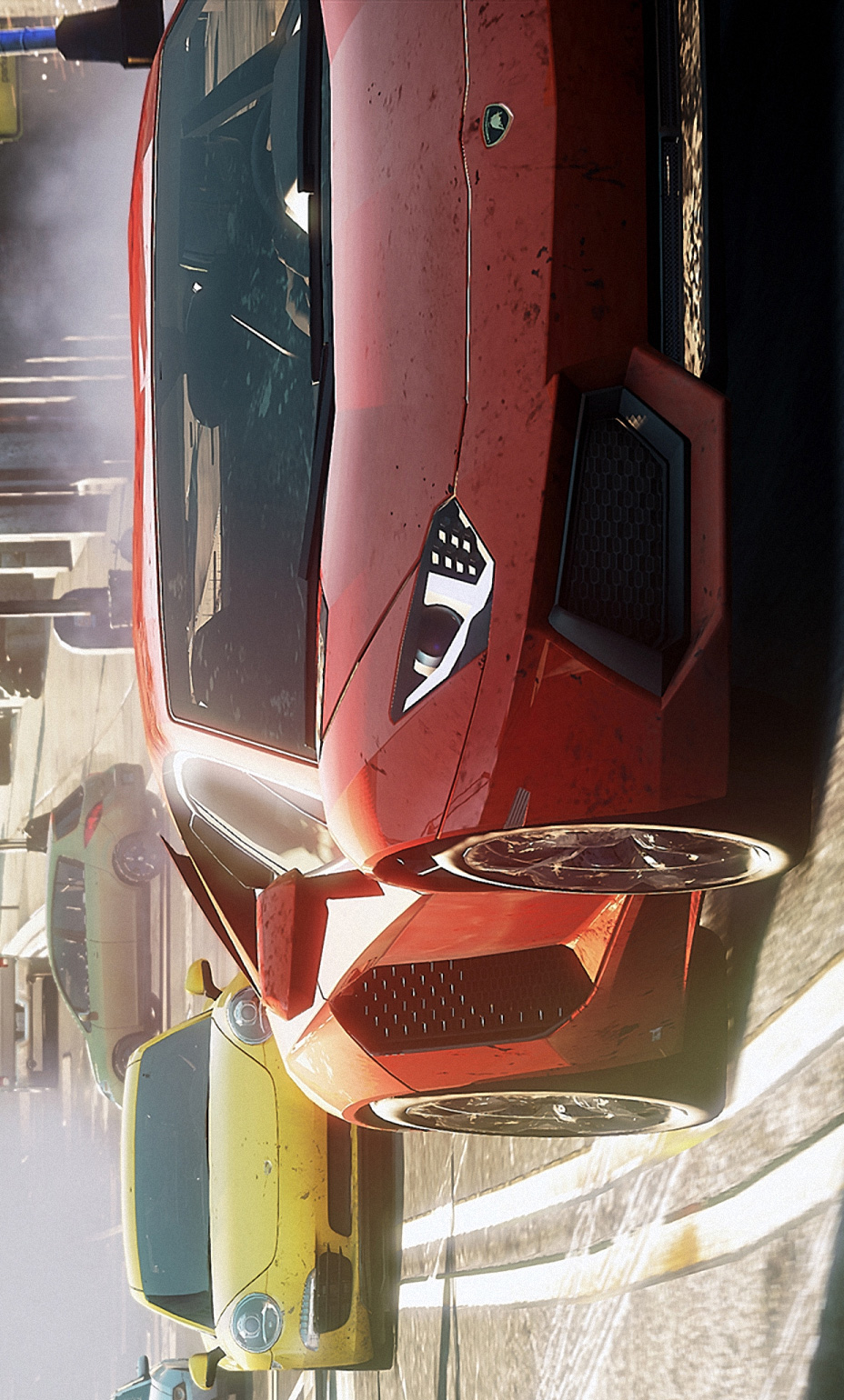 In fact, the single-player campaign's best traits involve multiplayer. The top 10 Most Wanted in single-player reflected my friends' single-player rankings. Nearly everything my car did was constantly measured against the accomplishments of my online friends - how far I jumped, how many billboards I destroyed, how fast I completed a race. All of these rankings appeared inside the world of Fairhaven like augmented reality bubbles, tempting me to set new high scores. It was like the perfect combination of an arcade leaderboard and high-grade street drugs. Even if I'd never played head-to-head multiplayer, the asynchronous multiplayer would have provided an engaging competitive experience.

With friends, Need for Speed Most Wanted's weaknesses become its strengths. Sprinting to the starting line on the far end of Fairhaven is suddenly its own little race. Events roll from one to the next with short intermissions between sets, keeping players out of the texting-while-driving menu. There are considerably more things to do, like team races, events that require the collaboration of the entire party and objectives that are in no way related to racing. After all, not everyone's the best street racer. And if you're bad at everything, there are plenty of fun and infuriating ways to grief friends (e.g., parking in front of the ramp during the "make the furthest jump" event).

The city is striking, and the multiplayer's care-as-much-as-you'd-like pace is perfect for taking in the sights. There's an avenue or landmark in Fairhaven that should feel familiar to any American. Here are the ports of San Francisco; there are the museums of Chicago; and in the distance, the mountain tops of Appalachia. Fairhaven is like The Simpsons' Springfield. It's anywhere and everywhere to everyone.

The visuals also serve a practical purpose. The crests of recognizable skyscrapers, bridges and landmarks stand tall above the other buildings, acting as persistent waypoints, helping me regularly find my bearings.

Need for Speed Most Wanted is as much a follow-up to Burnout Paradise as it is a new Need for Speed. The open-world racing of Criterion's Paradise invented Easy Drive mode, and was one of the first in its genre to blend single-player and multiplayer. Clearly Burnout Paradise's heart beats within Most Wanted: the beautiful vistas, manic multiplayer and obsession with high-speed collisions are all here. But as a franchise, Burnout games are wacky and light-hearted. In that capacity, Most Wanted is still very much a Need for Speed game, steeped in a sense of cool that's been brewing since Steve McQueen starred in Bullitt.

Need for Speed Most Wanted is really the best of both brands' personalities. Quirky, but sleek. Realistic, but spectacular. 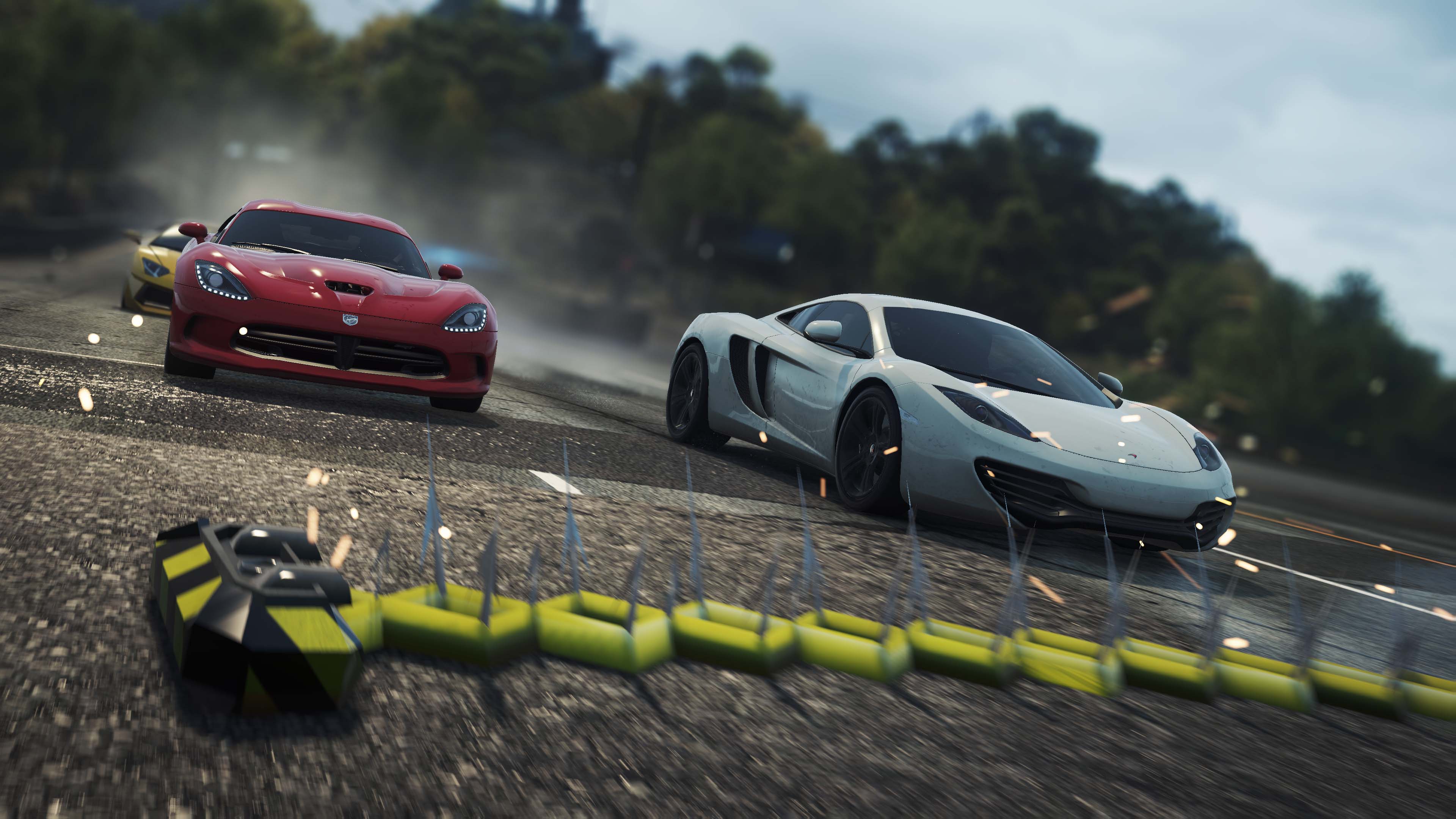 Fussy interface aside, Most Wanted is one of the best racing games of the year.

Need for Speed Most Wanted is marred somewhat by a fussy, restrictive and self-defeating interface. But it's one of the best racing games of 2012 regardless. And if Criterion's track record of post-release support with Burnout Paradise is any indication, it will only improve over time. Criterion has proven itself as a steward of one of gaming's oldest and most beloved brands, and also as creative game makers in their own right.