David Hellman's artwork is an invitation. His painterly landscapes and layered compositions invite viewers to look deeply, to look carefully. They invite viewers to explore with their eyes and see the possibilities in the details - to observe interesting rock formations and consider what lies beyond the mountains and the gullies. In his upcoming comic, Second Quest, on which he is collaborating with writer Tevis Thompson, his art will once again serve as an invitation. It will be an invitation inspired by The Legend of Zelda.

It is this marriage of art and writing that Hellman and Thompson hope will invite readers to explore and discover a fictional world in ways they believe many modern video games are failing to do.

Hellman and Thompson are Kickstarting Second Quest, a graphic novella/comic. Hellman is best known as the artist of the critically acclaimed 2008 game, Braid. Thompson is a writer and essayist who has written stories like A Jar in Tennessee. It was his essay, Saving Zelda — a critique of the loss of discovery and the handholding in The Legend of Zelda: Skyward Sword — that brought the two together to collaborate on this ambitious project that, at the time of writing, has already exceeded 90 percent of its $50,000 funding goal with two weeks to go.

The frustrations with skyward sword 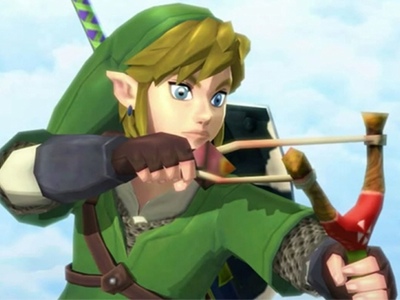 "Games are about player agency to a very large extent."

"Games are about player agency to a very large extent," Hellman tells Polygon. "And I think the problem we have with the more recent Zelda games is that our agency as players isn't as valued as much as we feel it should be, and that's sort of against the nature of video games and against what they do best."

Much of Hellman and Thompson's frustration comes from them knowing what games are capable of when they are doing what they do best and the disappointment in seeing a much-adored series like The Legend of Zelda embracing a much more linear style of game design.

The two want to find a way to recapture the sense of wonder and discovery that they were rewarded with when they played earlier Zelda games, but they have no interest in making a game to rectify the issues they have with more recent games. 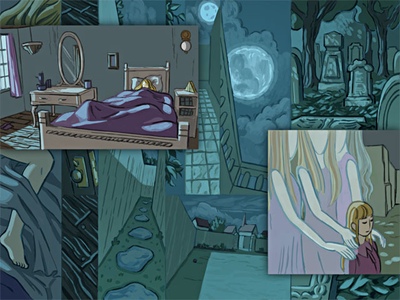 "I think we both value the player experience as well as our own player experience," Thompson says. "As a writer I find myself constantly grappling with this weird experience I have every time I sit down to play a game and everyone's trying to describe it. I think we're still in the early days of being able to describe what we're experiencing, so I guess the opportunity to take this into another form ... I think it's exciting to think of some of the things that are specific to the game that aren't working by contrasting it into this narrative world with David's lush landscapes that kind of just invite you in."

In a way, Second Quest is Hellman and Thompson's exploration of the player experience. Through the power of art and storytelling, they want to critique what they believe many games do poorly, but more importantly they want to use the strengths of comics to explore the strengths of games and, through Second Quest, they hope to deliver the kind of experience they both feel was lacking from Skyward Sword.

The power of comics

It almost seems an odd choice for an artist and writer to critique the shortcomings of interactive entertainment through a medium that requires little interaction compared to video games. To this, Hellman and Thompson say that different forms are good at different things, and when they work well — when great books or comics or films or paintings work well — they can open up spaces for the reader to not only get involved but to think about what certain things mean and to feel out the differences in those meanings. Player and viewer engagement isn't so much about the player being able to control where the character walks or how often he swings his sword — Hellman and Thompson believe a large part of it has to do with engaging the player on a creative and emotional level by firing up the imagination.

The two hope to achieve this on one level through Hellman's art. The Braid artist is creating a lush and stylistic world that's buzzing with movement and personality. The compositions of his works arouse the curiosity of the viewer; his landscapes suggest that there is something beyond what is seen on the page, the relationship between the trees and the mountains and the sky and the clouds tell a story of what has happened and what could happen next. His images might be two-dimensional, but the worlds that they suggest stretch far into the distance.

"Something I try to capture, which is difficult to explain, and I have this feeling when I'm playing both the first Zelda game and when I go for a jog or walk around San Francisco, is the world is very evocative. Nature is very evocative just in how it looks. And I have this feeling that there's some passive communication in the world that's trying to talk to me," Hellman says. 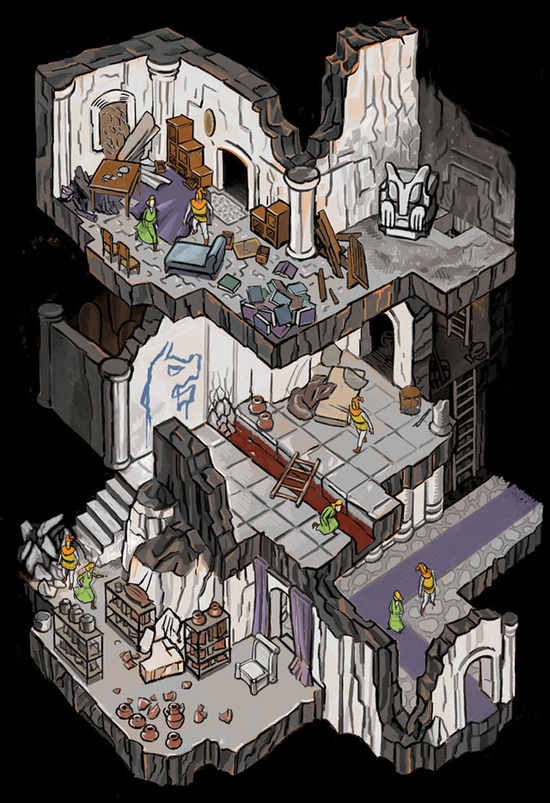 "I don't take this literally, but something in me just has a feeling that the world is speaking to me, and I think it's just my mind, but I think the way that we identify with landscapes is intrinsic and we all kind of do it to some degree."

Hellman says there is a mystery in older games that transfixed him and other players, like when players looked at rock formations or walls they were able to glean messages, discover hidden passages, find cave entrances and learn something about the world in which they were exploring.

"What I love about those games is that feeling of gratification, that suspicion that there's a message there for you is gratified if you really pay attention and find that cave or that hidden entrance.

"So in the artwork [of Second Quest] it's kind of difficult to pin down, but you can put personality into the way a tree is standing or how the arms of the trees are positioned. I try to approach it like there's a face in the landscape somehow," he says.

The dystopia of video games

The main character of Second Quest lives on a floating island in the sky. Her world is one filled with tales and legends. She is told stories about her world that she is expected to accept. She spends her days staring down to the earth, questioning whether the legends she is told are true.

"You could say she's trapped in a world that many game players would be familiar with," Thompson says. "Having this agency constantly circumscribed and trying to find ways out of it and maybe not always succeeding at that."

Hellman and Thompson want to feel out the limitations of games like Skyward Sword. Tevis says that while playing Skyward Sword, even though the player assumes the role of Link, he could identify with the Zelda character inasmuch that control was constantly taken away from him.

"So in Skyward, Zelda is a pretty likeable character," he says. "She's spirited, she's tough, she's smart and when I started out I was like great, we have a great Zelda here, she seems more real. But then what happens is, and maybe it's not a surprise, halfway through the story this interesting, independent person falls to destiny and essentially goes to sleep.

"In every Zelda game she's either trapped in a room somewhere for the whole game or she's put to sleep and it was just so disappointing because once again it's like it teased us with this real character and then just put her through the motions Once the game's in full swing she goes to sleep." 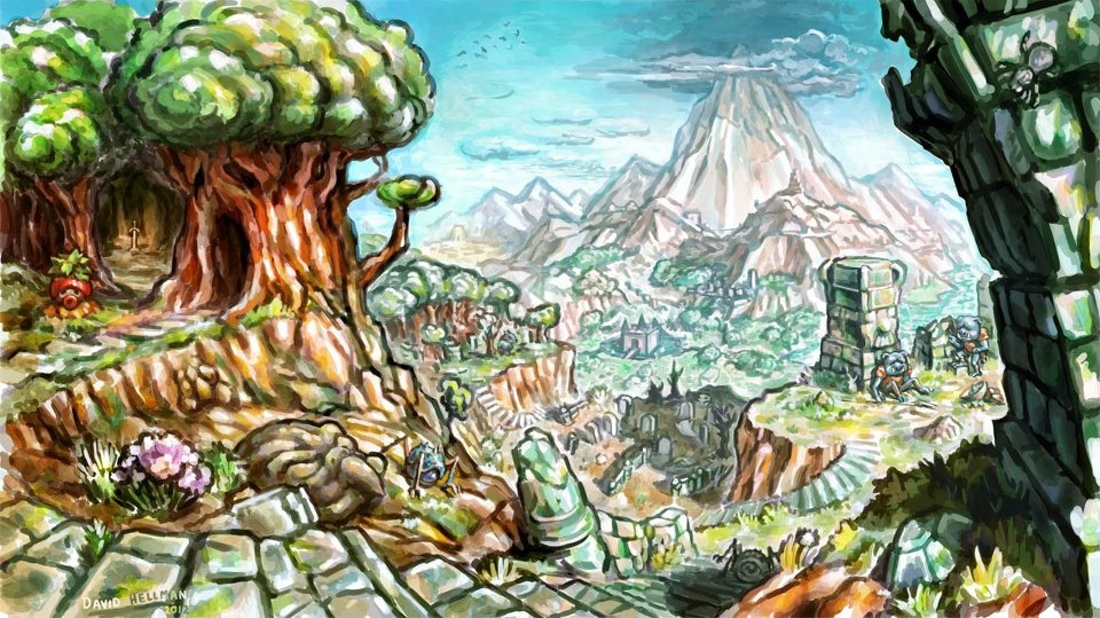 Thompson believes there is something dystopic about playing a game. He describes dystopias as often characterized by a lack of control. A society may seem perfect, but in order to achieve the perception of perfection many elements that make life livable and bearable have been taken away from the people in the world.

"When you think of modern games, they have this appearance and they really trumpet player agency or 'your own experience', but they either are on rails the whole time or trying to give you an extended movie experience, which all kind of rings false in the end," Thompson says. "You end up feeling as a player that not just your agency but your whole experience isn't valued. They have an experience for you."

Hellman says that the experience can sometimes be likened to "death by a thousand pinpricks". The player is told that he or she is the hero, that they have a big job to do, but they are then forced to tolerate tedious tasks, endure long, unskippable cutscenes and receive lectures from non-playable characters.

"I end up feeling confined and patronized."

"There are just so many moments that seem to be the wrong player experience where I end up feeling confined and patronized," Hellman says.

Hellman and Thompson want to use Second Quest to explore the sense of dystopia associated with gaming. The character in their comic lives in a world that is isolated physically and mentally. It is a world that extols its own legends. It's an insular place where no one asks questions. Having spent four years in China, Thompson is drawing from his experience being in a country that, until only thirty years ago, had remained fairly isolated from the rest of the world. Second Quest is an opportunity for him to unpack some of those experiences and pose questions like how it must feel to live on a floating city that is cut off from the rest of the world and what it must be like to finally open up.

"It seems the trick dystopias play is to not let you know you're in a dystopia," he says. "Usually in those kinds of stories only one or two people are pushing back against the system and everyone else has kind of internalized it and they think they're in a paradise that's really a hell, or they don't think about it.

"There is certainly a feeling of risk and exposure, but I think that's the gambit of personal art making."

Hellman and Thompson have been in the spotlight since they launched their Kickstarter campaign two weeks ago. With Hellman the artist on Braid and Thompson writing a widely read essay critiquing a game series with an enormous fanbase, the pair are under immense pressure to not only meet their Kickstarter funding goals, but to produce a comic that lives up to big expectations.

Both are aware that Kickstarters don't always succeed, and even if it does there's a risk that Second Quest might not. But it's a risk Hellman says needs to be taken.

"Since I was small, I've always loved to sit with my sketchbook and dream things up and then try to make those things real with friends who encouraged my creativity with their own talents," Hellman says. "But beyond school, protecting that private creative time requires new resourcefulness, [but it] also requires risk, and vulnerability.

"It requires that I choose projects that I am most passionate about and that I reveal myself somehow in the process. So there is certainly a feeling of risk and exposure, but I think that's the gambit of personal art making."