Assassin's Creed 3: Liberation is self-conscious about its identity.

This handheld spin-off of Assassin's Creed would like you to believe that it belongs in the main pantheon of the series. It has a lot of tricks to try to convince you. Progressing past the far-aways and long-agos of Assassin's Creed and Assassin's Creed 2, Liberation centers on New Orleans in the late 18th century, when control of the city was traded between the French and the Spanish, and moral boundaries were tested by slavery and the rise of capitalism.

Big as its ambitions are, Assassin's Creed 3: Liberation contains them in a rather small game. New Orleans and the surrounding bayou areas are nearly the size of Assassin's Creed: Brotherhood's Rome, but Liberation's conceptual promise goes unfulfilled, and a myriad of bugs, gimmicks and baffling design choices wear down the experience. 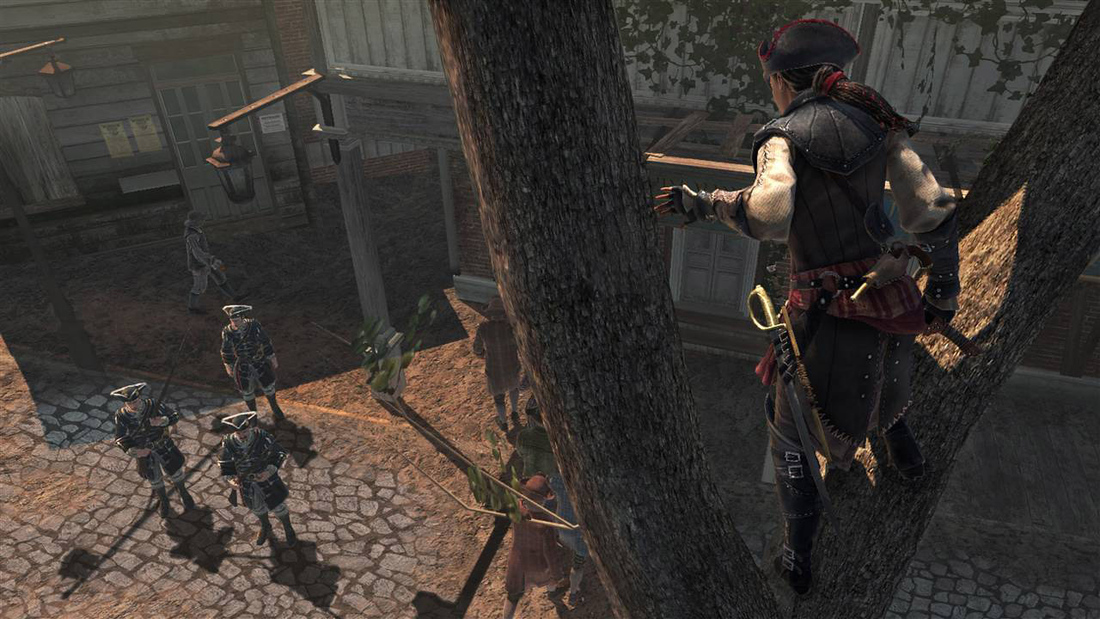 Liberation's core storyline follows series newcomer Aveline de Grandpré, a female assassin of mixed heritage whose home is the setting of a power struggle between the Templars and the Assassins. Liberation takes the sci-fi framework of previous Assassin's Creed games a step further by presenting the game itself — the one you're playing — as propaganda software produced by a Templar organization within the Assassin's Creed universe. The "real" history of that universe is twisted in the game in order to portray the Templars as the good guys. So Liberation is a virtual representation of a virtual representation of a corrupted retelling of history.

With so many layers of abstraction at work, the story asks for more heavy lifting than the game is able to provide. Aveline mixes together southern belle, freedom fighter, and businesswoman into a compelling character portrait, but her motivation is lost in the momentum of a plot where she possesses little influence. Liberation fumbles numerous opportunities to deal with serious issues that should affect Aveline's character development, including her reliance on passing. 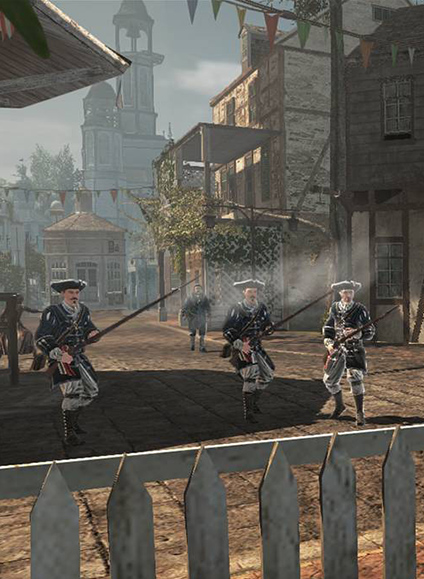 Instead, the game focuses on a conflict between Templars and Assassins that's more confusing than ever. Between frequent plot twists and reminders that much of what the game presents is not "what really happened," I found it difficult to pinpoint who my real enemy was. Is this latest assassination target actually a Templar? Is Aveline being misled by an untrustworthy friend? Or are the Templar creators of the game-within-a-game misleading me into believing Aveline was misled? It's difficult to keep it all straight.

To help sort through the lies, Assassin's Creed 3: Liberation introduces a literal deus ex machina: Citizen E. This hacker supplants the fabricated Templar history with cutscenes of what really happened — if you can find and kill special characters he's planted in the game.

Citizen E's revelations illuminate the plot and are required to unlock the game's true ending. They're also a pain to hunt down since Citizen E locations don't show up on your map. The Assassin's Creed series has always had out-of-the-way collectibles, but I've never had to rely on them to form even a basic understanding of the game's story.

Confusing as the plot is, Liberation's core gameplay will be familiar to anyone who has played a previous entry in the Assassin's Creed franchise. Aveline climbs buildings, mingles unseen in crowds, and stabs people in much the same fashion as previous protagonists Altair and Ezio. Her arsenal includes a whip, which allows her to swing across wider gaps and trip up enemies. Beyond that, the biggest addition to the formula is Aveline's personas. Aveline can disguise herself as an upper-class socialite or a slave depending on her objective. Each persona comes with benefits and drawbacks as well as its own notoriety meter to let you know how much guards will be watching you.

In theory, the persona system supplies more potential approaches to each mission, but in practice it's severely limited for roughly half of Assassin's Creed 3: Liberation. Early missions force you into a single persona and set you on a hyper-linear path, where even walking in the wrong direction can earn you a restart. The missions sticking you with the "lady" persona are especially frustrating. This disguise removes Aveline's ability to climb walls or fight, subsequently removing a good chunk of what makes Assassin's Creed fun. As a strategic option, it provides some interesting possibilities; as something the game forces on you a few too many times early on, it's infuriating. 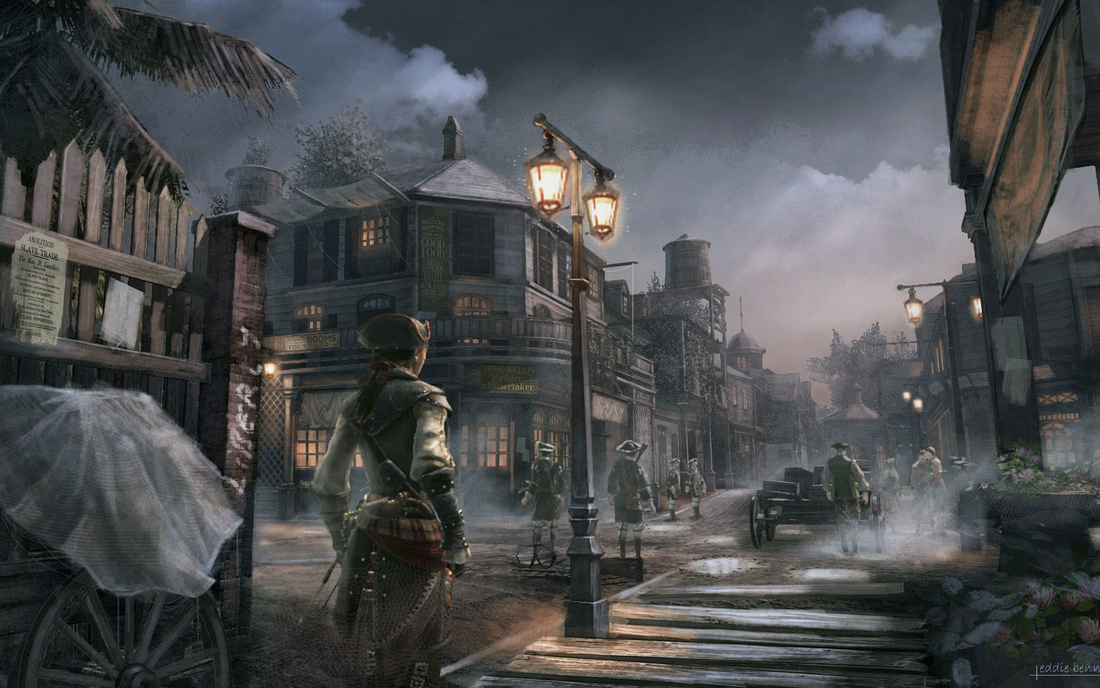 Assassin's Creed 3: Liberation falls into the all-too-common trap of trying to shoehorn all of the Vita's bells and whistles into the game in some form or another. Most of these are terrible for the simple fact that they take away from the systems that make Assassin's Creed fun rather than improving them.

Pickpocketing is performed by walking up to characters and slowly sliding your fingers along the rear touch pad. Half of the time that I attempted this it failed for inexplicable reasons, and I felt like a clumsy idiot rather than a smooth, dangerous thief. The process also exposed the brain-dead AI of the citizens, who will stare straight at you as you clean out their pockets and not react.

One aggressively frequent puzzle utilizes the Vita's rear camera. Aveline finds letters in the game that must be held up to a bright light to uncover their hidden markings — and you must hold the Vita's camera up to a bright light in real life as well. Ignoring the fact that this is an annoying request for a handheld game that you could be playing in a multitude of completely dark environments, it simply didn't work. Sometimes I would hold it directly up to a lightbulb and get no reaction, only to hear a chime of success when I placed the Vita down on my knee, covering the camera completely.

These gimmicky distractions are bad enough when tied to side missions, but there are also a handful of main story missions where progress will be blocked until you master these finicky mechanics.

While Liberation's virtual recreation of 18th century New Orleans is detailed and pretty, its strongest moments send Aveline away from the city. The recurring bayou area is a lengthy, slow-paced slog, but other chapters have more polished excursions to unexpected locales. These bits trim the mechanics to their basics — platforming, melee combat, and a tiny bit of stealth — but the gameplay is more fun, and the game is better for it.

The New Orleans portions of Liberation open up and improve eventually, but the game is often in conflict with itself. It wastes time tutorializing obvious elements, yet barely explains many of the complex systems going on behind-the-scenes. Some additions seem superfluous, such as the ability to run Aveline's shipping empire via a management simulation — a mode where you can rake in tons of money despite the game's lack of much worth buying.

Liberation's multiplayer mode in particular suffers from the game's failure to communicate its systems and how they work. Essentially a confusing social game where you choose a side (Templars or Assassins) and a home town, you send lackeys to perform tasks with lengthy cooldown times. Though it would seem more at home on Facebook or a cellphone, Liberation's multiplayer toys with some interesting concepts. But the utter lack of documentation makes it impossible to parse how everything works, what your end goal is or how you can best aid your side at any given moment. 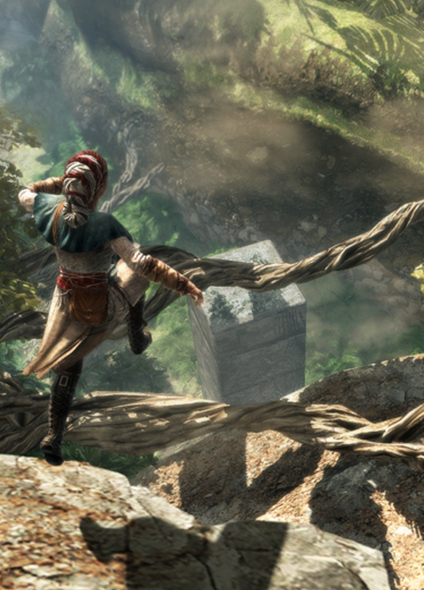 Confusion defines Assassin's Creed 3: Liberation. Ubisoft's desire to transcend low expectations for handheld spin-offs is clear, and I can respect that. Liberation accomplishes that every once in a while. But those stretches were inevitably shattered by restrictive missions, unexplained systems and an unintelligible story. For all its noble efforts to the contrary, Liberation still feels like a second-rate handheld port where it counts.