Cloning Case Files is a three-part series examining the personal impact of game cloning in the iOS app store. Each entry details the experience of an independent developer who suffered in some way from game cloning and how they worked to overcome the effects of cloning. This is part one. Here is part two and here is part three. - Ed.

In less than a month, a small game development studio is going to release its iOS baby to the world. In the high-pressure App Store marketplace, there's no guarantee that it will succeed. Every release is a major risk and could threaten the future of the company. To increase the odds of being noticed, the studio releases a trailer.

That's when things get interesting. 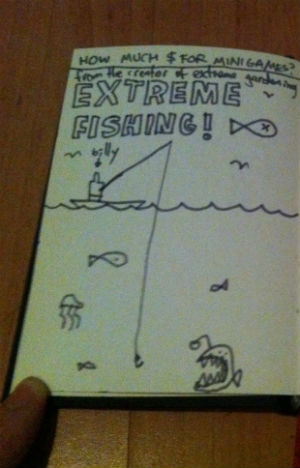 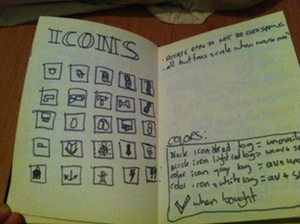 An independent game designer named Jan Willem Nijman is watching a documentary about tuna fish. "Like large scale fishing but also line fishing," he explains to me. "These guys sitting in the boat, whipping in loads of tuna and it was all beautiful, HD, slow motion footage of fish floating through the air, and it sorta clicked and I was like, what if we mixed that with Duck Hunt and tons of upgrades? And basically I took a piece of paper and I wrote that entire design of Radical Fishing and it hasn't changed since."

At their development studio, Vlambeer, Nijman and his development partner, Rami Ismail, sell the tuna fish hunting idea as a Flash game to Bored.com and publish it asRadical Fishing on November 12, 2010. Part of the deal gives Vlambeer the rights to make an iOS version of the game in the future if they so choose.

Nijman and Ismail are sitting in their offices, watching a trailer for an iOS game that's going to be released in under a month. The game is Ninja Fishing. The graphics are different, but the gameplay structure is basically ripped from the Flash game they created. "We tried to find differences," says Ismail. "We even slowed down the trailer, frame-by-frame, to check the one shot of the upgrades to see if there were different upgrades in there. They were all identical."

The Vlambeer duo is trying to remain calm. "We decided to take a careful approach to this because we didn't want to blame anything on anyone if we're not super certain that it's true," says Ismail.

They don't need to wait long. Gamenauts reaches out to Vlambeer a day after the controversy erupts. "They ... apologized for not contacting us before. And I think they offered us credits in the game," Ismail says.

"WE DON'T WANT TO EARN MONEY OVER THEIR GAME. WE JUST WANT THEM TO MAKE THEIR OWN." 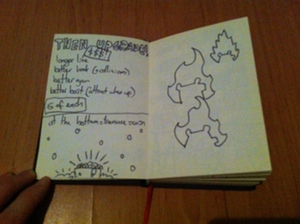 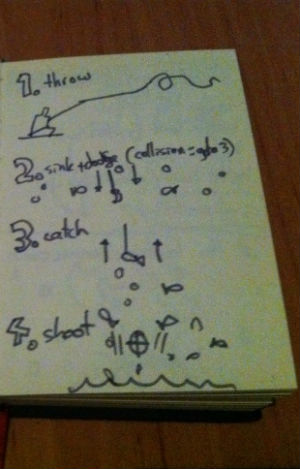 In the email, Gamenauts admits to Vlambeer that Ninja Fishing is inspired by Radical Fishing, but says that they can't offer Vlambeer credit in the game until the first title update. The version Gamenauts has already submitted to Apple is suspiciously lacking the nod to the original designers. It's starting to look like Gamenauts got caught with a hand in the cookie jar.

Vlambeer is eager to come up with a solution, and for good reason. In the backs of their minds is the iOS version of Radical Fishing (called Ridiculous Fishing) that they had been working on since November of 2010. It's nearly finished and Ninja Fishing threatens to harm any chances of its successful launch. Whichever game comes out first on the App Store will reap the rewards, even if it isn't from the original creators.

So Vlambeer starts bargaining. Maybe just change the theme of the game enough so that it wouldn't be confused with Ridiculous Fishing? In response, Gamenauts sends a 5-point defense of why they don't need to change anything and that it's not stealing.

The emails continue. Gamenauts offers Vlambeer some of the revenue from the sales of Ninja Fishing, which Vlambeer declines.

"We don't want to earn money over their game. We just want them to make their own game instead of ours," says Ismail.

Gamenauts still hopes to come out of this clean, however, so Ismail gives them one final offer: Wait. Wait to release Ninja Fishing alongside Ridiculous Fishing.

"We promised we'd have it done as soon as we could," says Ismail. "Like within a month or two, I think. If you're going to take our game and release it, at least give us a fair chance on the App Store. Let the games speak for themselves and may the best one win."

The response from Gamenauts couldn't have been worse for Vlambeer. The game had been released last night. That was it. Conversation over. 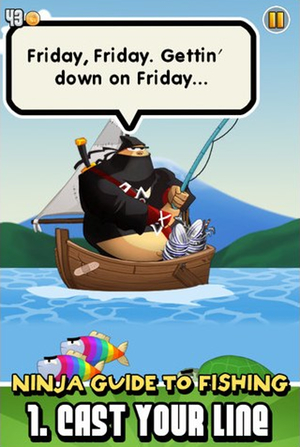 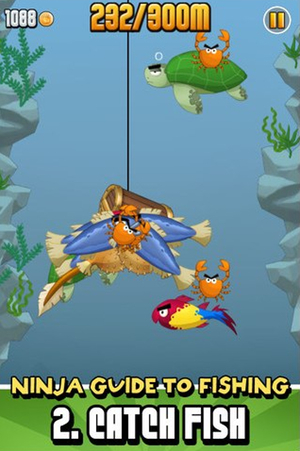 "WE FOUND OUT THE HARD WAY THAT CREATIVITY IS FRAGILE."

In about a month, a small development studio is planning on releasing its iOS baby to the world. In the high-pressure App Store marketplace, there's no guarantee that it will succeed. Every release is a major risk and could threaten the future of the company. And, to make matters worse, the game they've been making has just been cloned.

Ismail explains how production on Ridiculous Fishing grinds to a halt right after the release of Ninja Fishing:

"It was pretty soul-crushing. We found out the hard way that creativity is fragile. People say, 'Well, you guys are creative, you can make up new stuff. You'll be fine.' But that's not really the way it works."

"I remember us sitting there for at least a few weeks being completely demotivated. Greg Wohlwend, our artist, completely shut down. He couldn't work on the game without thinking of the cloning."

Jan Willem Nijman, who came up with the original idea for Radical Fishing, is equally sapped: "People get the idea that we're creative, so we can keep pooping out games like it's no problem and it doesn't cost us anything. But if [we got cloned] a few times, I would definitely quit and become a doctor or do something else because. I would think, [as a game designer] I'm not able to add anything meaningful to the world." 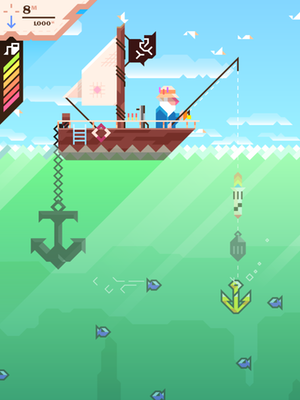 Vlambeer has just released Super Crate Box for iOS, which garners critical praise (though fails to come close to the sales numbers of Ninja Fishing).

The team decides to return to full development of Ridiculous Fishing, even though Ismail admits that the wounds of the Gamenauts incident remain. "It's scary to release a game you've been working on with a star team for the last year and at the moment you're going to release it's potentially going to get voted with one-star by hundreds of people based on the notion that we ripped off a game that ripped us off. It's scary."

"THE ENTIRE THING HAS PUSHED US TO MAKE RIDICULOUS FISHING BETTER."

Despite that, he remains confident in the game they've made. "The entire thing has pushed us to make Ridiculous Fishing better. We really want to blow Ninja Fishing out of the water in every way possible. Like literally. Just fling it up in the air, grab our shotgun and shoot it."

Vlambeer isn't alone is seeing the promise in Ridiculous Fishing. Just last month, the Independent Games Festival nominated it for Best Mobile Game. The awards will be held in San Francisco on March 7, 2012. 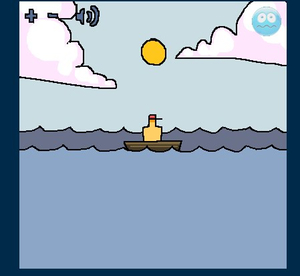 The gameplay structure of Radical Fishing consists of the following: 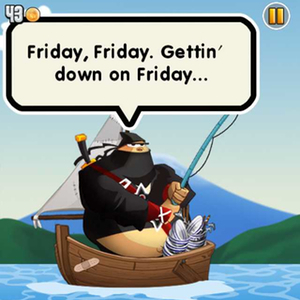 The gameplay structure of Ninja Fishing consists of the following steps:

Vlambeer decided not to seek legal action against Gamenauts. If they had, would they have had a case? According to Jas Purewal, a London-based lawyer who runs a blog called Gamer/Law, they would not. "Based on the current law, copying a specific and identifiable part of the game, like a part of the code or a graphical work or sound file, would increase the probability of copyright infringement.

Since Gamenauts only used the game mechanics from Radical Fishing in Ninja Fishing, there would be no case of copyright infringement. 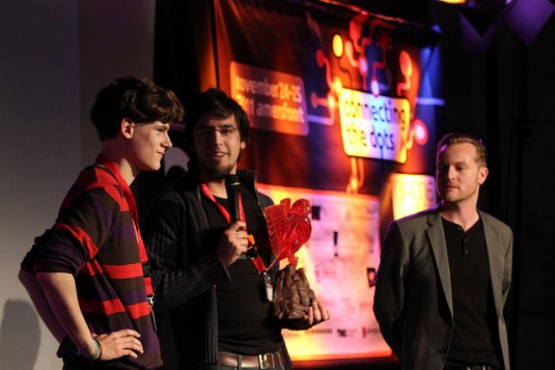 But why aren't game mechanics protected? "One of the concerns about extending the law in this area is: You would effectively give someone ownership rights in how a game is played," says Purewal. In other words, someone could copyright something so broad, like the ability to jump in a platformer, thus creating a whole host of new problems.

Purewal remains hopeful, though, that a precedent-setting case for protecting game design is still to come. "If a developer who thought that his game has been cloned went off to court and was able to explain the hard work that had gone into creating it, that it was an original work, and was able to show that the other developer had copied [the game mechanics], even if they haven't copied the code, that had caused loss ... I think that there is at least a possibility that a judge might agree with them.

"I don't think it's absolutely set in stone that a judge would say, 'No, I don't think you have any case here.' The problem is that because nobody at this point in time has done that, so we don't yet have a test case that we can ride on to decide it one way or the other."

July 2010: Jan Willem Nijman of Vlambeer comes up with the idea for a unique fishing game (originally called Extreme Fishing) while watching a documentary.

November 2010 Vlambeer publishes Radical Fishing on Bored.com. They decide to begin work on an iOS version of the game called Ridiculous Fishing.

July 2011 Gamenauts releases a trailer for its upcoming iOS game, Ninja Fishing, featuring all of the core gameplay elements from Radical Fishing.