Lollipop Chainsaw has the routines down, but bad behavior might keep it on the bench.

It's been a while since I've felt as conflicted about a game as I do about Lollipop Chainsaw.

I don't expect games from Japanese auteur Suda 51's Grasshopper Studios to be perfect – I don't think anyone does. Grasshopper Manufacture's games are known for concepts and weirdness as much as anything. Its last major retail release, Shadows of the Damned, felt like a love letter to VHS-era horror films and handled that well enough to sell on charm, if not substance.

LOLLIPOP CHAINSAW IS MORE FORGIVING THAN YOU MIGHT EXPECT 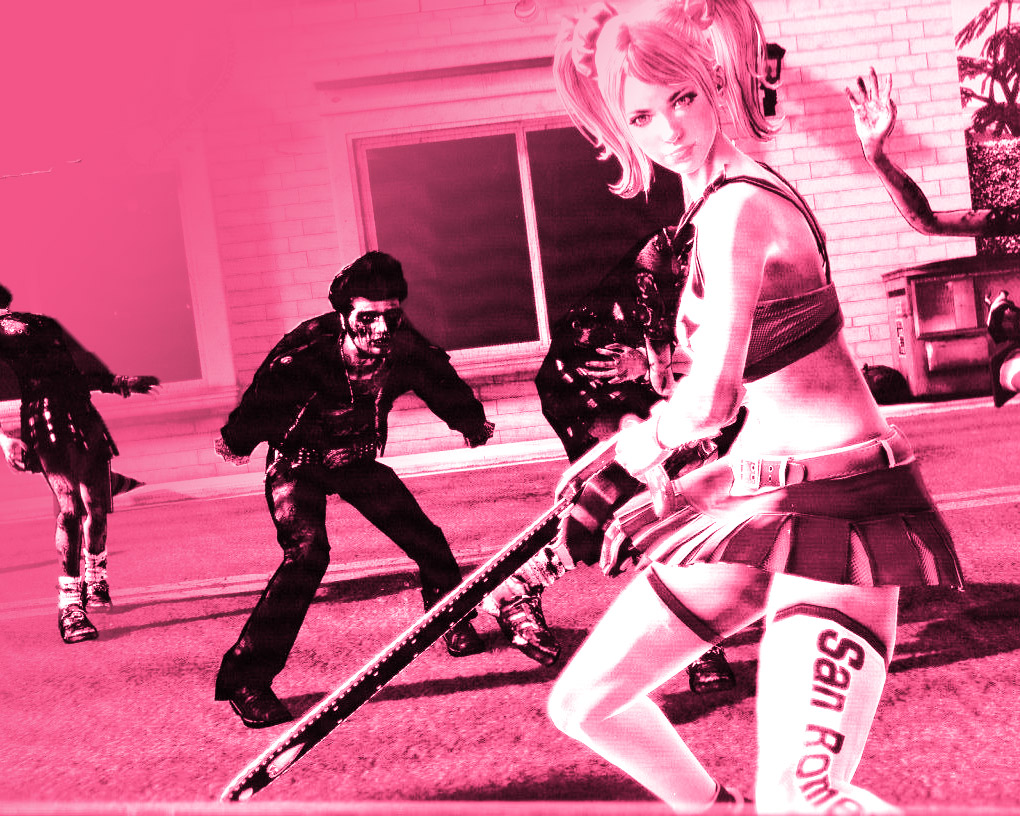 The good news: Lollipop Chainsaw is more mechanically sound than anything Grasshopper Manufacture has put its name on. Less clunky than Shadows of the Damned, free of the burdens of motion control that hung around No More Heroes' neck like an albatross, Lollipop Chainsaw mostly plays as it should. There's a workable combo system that isn't overly reliant on the upgrades you can buy throughout the game, and you won't need to enlist the aid of a sensei to drill the combo commands into your head.

Instead, some mild experimentation yields acceptable zombie-killing results. Lollipop Chainsaw establishes new enemy types that affect combat scenarios at a good pace. As the game progresses, fights become more about crowd control and peeling off stronger ringleader types. Using the right move at the right time can lead to "Sparkle Hunting" moments where you can decapitate multiple zombies at once, yielding more coins to buy character upgrades.

The controls are a little wonky at times, and Lollipop Chainsawfalls victim to extended pauses at the tail end of combos, which lead to infuriating cheap hits as Juliet stands powerless. Getting knocked down means obnoxiously hammering on the "B" or circle button to get back up. If it didn't stutter so much, it'd be harder to see that there's just not a ton of depth to Lollipop Chainsaw's combat. But there's a pretty wide margin for error and experimentation, and the frequency of lollipops (which you can collect and use to restore health) makes Lollipop Chainsawmore forgiving than you might expect. 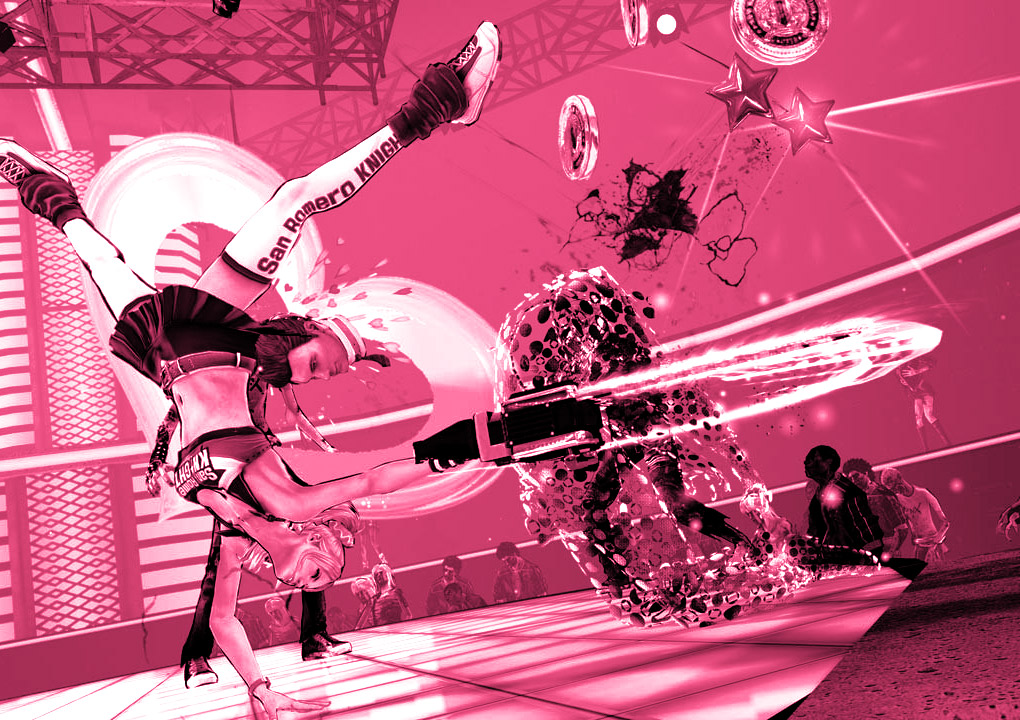 Lollipop Chainsaw is approachable that way. It seems more interested in being played and enjoyed than most of Grasshopper's games, content to get out of your way with a minimum of especially stupid video game contrivances. You'll go to an area, you'll kill all the zombie classmates around, and the next section of level will open up.

Better yet, the sort-of mini-games that have become a hallmark of Grasshopper Manufacture are pretty good, finally! They're not jarring, they make sense within the game's fiction - like the basketball game that sees you lopping off heads to score, while making sure that an aggressive center doesn't bat them all away - and they don't get in the way of a sense of forward momentum or rhythm. Usually. Some sections rely on the instant death/failure chestnut, but they're uncommon enough that if the worst example hadn't occurred near the end of the game, I would have to spend time thinking of a previous one.

But more than basic mechanics and inventive level design, there's a general sense of cohesion to Lollipop Chainsaw that seems difficult for other games to nail down. Everything feels in place. The soundtrack, both original, and licensed, is truly fantastic, mixing death core and dubstep with '80s new wave and pop (like Dead or Alive - yes,THAT Dead or Alive). Both Little Jimmy Urine of Mindless Self Indulgence and Akira Yamaoka's influences are felt without clashing. 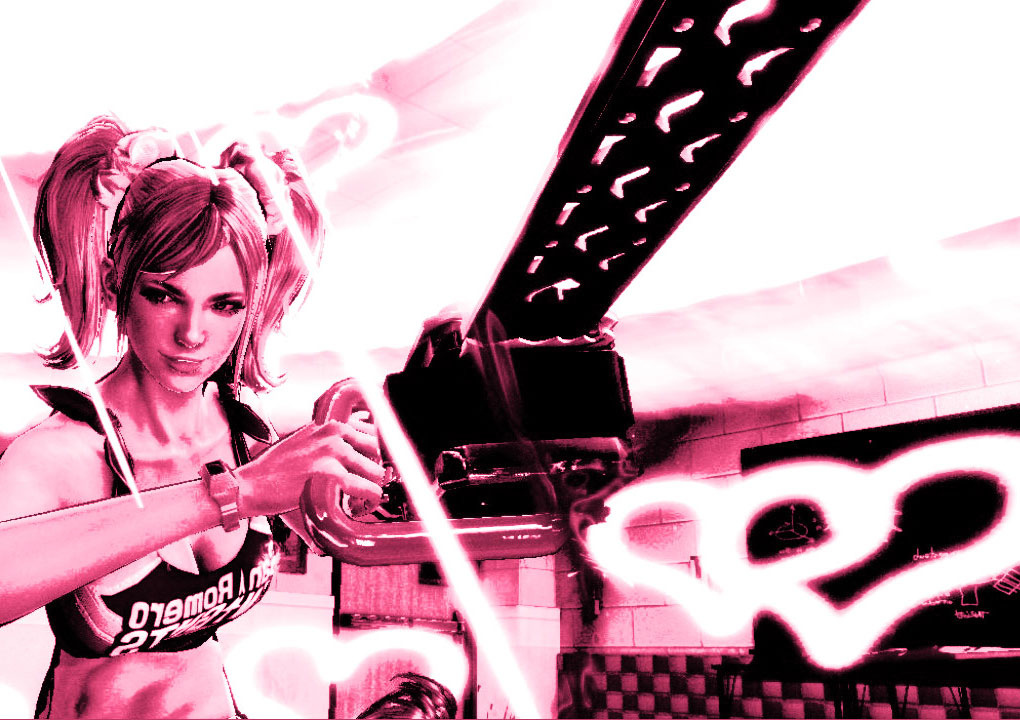 The music helps glue everything else together. The sparkles, the goofiness, the over-serious horror moments here and there, it all meshes. Some of this may be courtesy of James Gunn's (on writing duties for Dawn of the Dead 2004 and Slither) script treatment - there's a snappiness and intelligence to much of the dialogue that is occasionally even complemented by bits of teen sex comedy idiocy, a sort of chiaroscuro of sophistication and dumb. There are relationships in Lollipop Chainsawthat stretch their fingers past cliché and cling to actual development. Juliet's relationship with her body-challenged boyfriend, Nick, is superficially stupid, but it provides conflict and a smidge of real pathos too.

But there's a very rough thread that's also tightly woven into Lollipop Chainsaw, evident right away and impossible to ignore. The game's exploitation goes way beyond the simple focus on Juliet's body, although that in and of itself is off-putting - if you made a drinking game out of finding a screenshot without underboob or a pantyshot, you'd be dead before an hour was up. Even more disturbing are the constant, gendered insults and epithets that drown Lollipop Chainsaw from start to finish.

JULIET IS REPEATEDLY CALLED A BITCH, A SLUT, AND WORSE 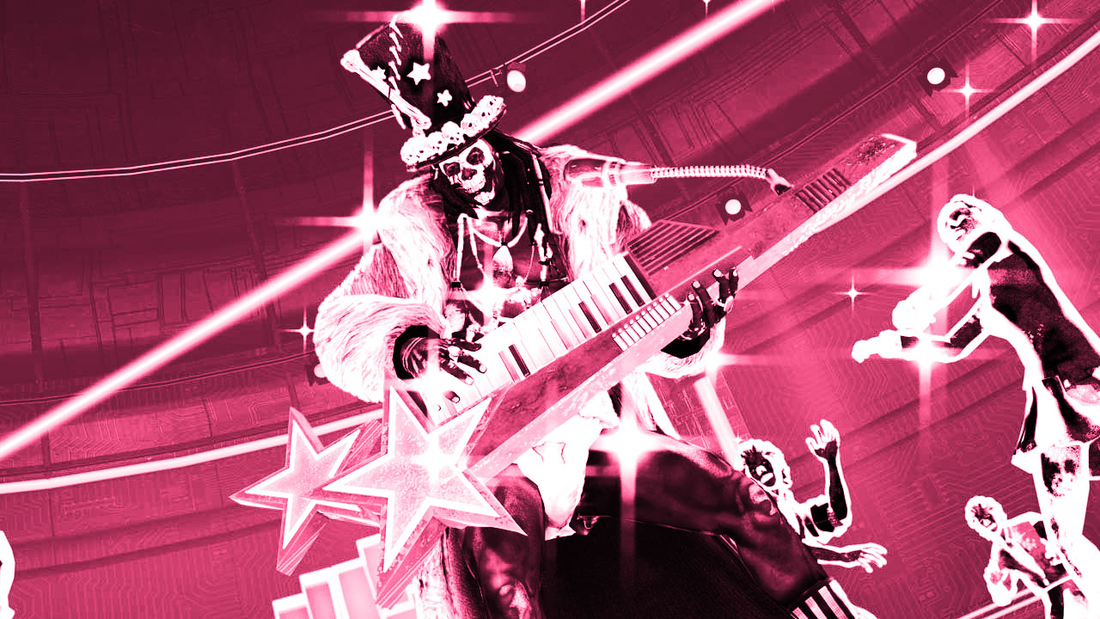 These aren't your run-of-the-mill bon mots. Juliet is called a whore, a slut, a bitch, and even a cooze - a word I've literally never heard in a game before, and now that I have, I find I could have lived without it - and threats of violence against her are highly sexualized. Dialogue heads into gross, dark places, including one boss who insists he's going to "fist (his) ass with (juliet's) head," which is paraphrasing only in the interest of expediency. The word "fist" is used, the word "ass" is used, and the word "head" is used.

The game never acknowledges any of it, save for some "zombies are gross" throwaway lines here and there, but it was impossible for me to ignore, even if Juliet as a character is willfully oblivious to it. If it were just one scene, I might be able to write it off as just that - a part that comes and goes. But everything else is so well-considered from a presentation perspective that it all seems like a conscious decision from Grasshopper Manufacture, just as there's a clear intent on focusing on Juliet's ass and breasts at every opportunity.

ALL OF LOLLIPOP CHAINSAW'S CHARM CAN'T MASK SOME DISTURBING EXPLOITATION

It's bizarre and disheartening that Grasshopper Manufacture's most approachable, refined, and charming game yet is so stuck in such disconcerting subject matter, so little of which is pertinent to Lollipop Chainsaw's gameplay, story, or characters. While Shadows of the Damned dealt with some similar themes in a darker story, it never dove into the weird misogyny and exploitation that Lollipop Chainsaw does. And that's the problem: Grasshopper Manufacture has demonstrated an ability in the past to walk a fine line between the salacious and the crass with a measure of success. At times, all of that shines through in Lollipop Chainsaw's theme of family and intelligent character work. But all the charm in the world can't wash off the dirt that Lollipop Chainsaw wades through.