Share All sharing options for: IndieCade selection Kachina has shades of Katamari Damacy and one intriguing hole

Kachina designer Ben Esposito is open about the visual and gameplay similarities between his game — a side project featured at IndieCade this week — and Katamari Damacy. Both games feature simple, colorful characters and items that grow bigger in scale as players gobble up more stuff from the world. In Katamari games, players control a sticky ball. But in Kachina, they control a hole.

The playable demo of Kachina featured at IndieCade was brief, little more than an introduction to the mechanics and possibilities of Esposito's game. Players are given control of the hole, sliding it underneath rocks, fences, chickens, foxes, and teepees to absorb them. As things fall into the hole, its opening expands, allowing it to swallow bigger items.

The hole can also regurgitate what it has enveloped. Tapping on the sky spews things forth, whole and alive. Once you've grown the size of the hole big enough to slurp down mountain ranges, players can eject them into the sky, knocking down the sun, the final, giant object of the game's demo.

Some of the demo levels felt like diversions with no goal. Just plunge things into the hole. Others showed puzzle-like potential. In one, the game asked players to help a pair of chickens cross the road. Easy enough; just swallow two from the left side of the screen, scoot the hole to the right of the road, spit them out.

In another level, Kachina presents the player with two cave-like structures, eyes blinking within their darkness. In a nearby field, three carrots, sit firmly planted in the ground. Sliding the hole under the carrots pulls them downward into the hole. Spit them out of the hole and the rabbits will emerge from their hiding spots. Suck them into the hole and they'll begin to procreate. As the hole begins to fill with rabbits, it grows larger and larger — its mouth wide enough to swallow the aforementioned mountains. 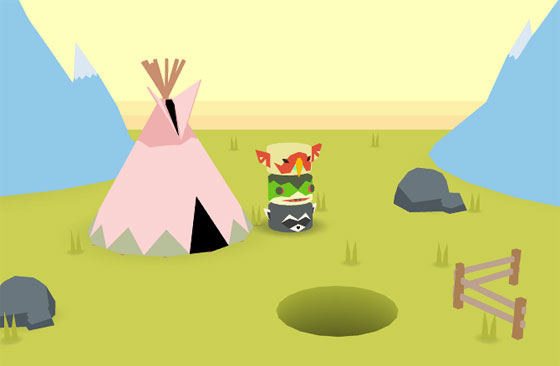 Esposito showed us another potential mechanic, a re-stacking of a totem pole by swallowing its three layers and rearranging them with careful regurgitation. There was no real puzzle here, just a clever trick.

Kachina feels like an experiment, more akin to an interactive toy right now — not necessarily a bad thing —than a fleshed out puzzle game. There's a clever charm to this game that feels like it aims to make players smile rather than tease their brains.

While the game's aesthetic and unlockable playable toys may draw comparisons to Katamari Damacy, Esposito says he's drawn influence from more than just Keita Takahashi's most famous creation. Kachina gets some of inspiration (and its name) from Native American kachina, spirit beings that personify nature, and the wooden dolls that represent them. Influence from Windosill and, apparently, Bruce Springsteen are also in Kachina's make up.

Esposito says he's developing Kachina in his spare time. He's been busy working on The Unfinished Swan, another visually striking game that's due for release on PlayStation 3 later this month.

There's no release date for Kachina yet, but Esposito is currently developing it for PC, Mac, and iOS.