ROCK BAND BLITZ CHANNELS THE FEEL OF ROCK BAND, ALL WITHOUT A PLASTIC INSTRUMENT

While Facebook gets in the way as much as it helps, Rock Band Blitz goes back to Harmonix's roots for leaderboard-focused fun.

But for everyone else, there's a game in Rock Band Blitz, and thankfully, developer Harmonix hasn't taken an easy sell as an excuse to phone in something forgettable. Rock Band Blitz takes cues from Harmonix's earlier work in Amplitude and Frequency with all the glory of modern online leaderboards, but aggressive social networking integration often rings a sour note in an otherwise inspired performance. 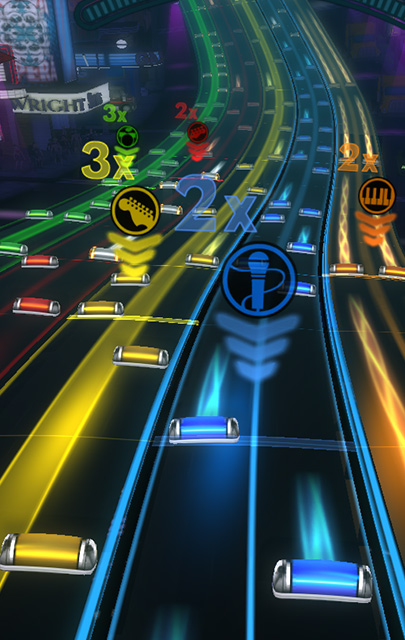 Rock Band Blitz's basic premise is complicated on paper, but simple in practice. Each song - or level, if you prefer - consists of up to five lanes on one highway, each one representing an instrument. Right or left notes drop for each instrument using the left and right sticks or the d-pad and the A button on their respective lanes, and playing on a lane earns points and levels it up, increasing the score possible.

The trick here is the checkpoints, which are scattered throughout each song. Initially, each lane can only be leveled up three times, but crossing a checkpoint will increase the maximum level for each lane - but only by the lowest current lane level. If you leveled your drums, bass, guitar, and vocals to three, but only brought the keys up to two, well, have fun with a max level of five until the next checkpoint.

In a way, the methodology behind checkpoints defines the game - unlike Rock Band Blitz'spremise, simple gameplay ideas reverberate through Blitz and have big effects on the way it plays. The multiplier system forces you to pay attention to every lane, rather than focusing on one, and while you can't fail a track, neglect can come back to bite you in the ass. 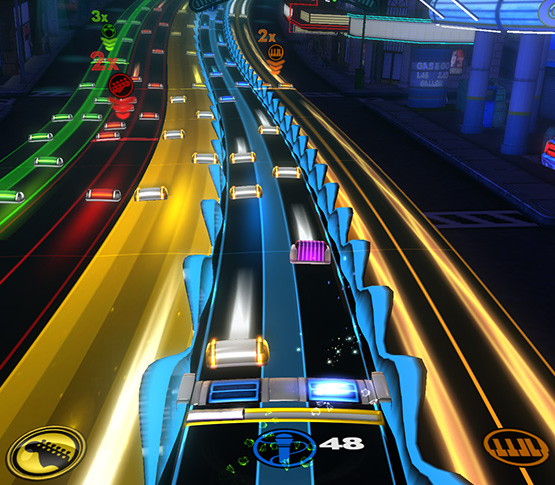 As you play through, you'll earn Blitz Cred points, which in turn unlock new power-ups and abilities like an overdrive-powered bandmate to play another lane, instrument-specific point bonuses, or even a giant pinball that ricochets down the note highway and can be bounced back using the play head. While some of these powers seem superfluous, eventually most turn out to fit the idiosyncrasies of certain play styles or allow you to compensate for some weak points.

Chances are you'll be looking for every advantage you can find once other friends start showing up on your leaderboards, though it's likely that some perfect power combination will be found. Rock Band Blitz is a score-chasing game in the classic sense, driven by leaderboard lust. In an interesting evolution,Rock Band Blitz's community and leaderboard implementation is largely driven by Harmonix's new Facebook app, Rock Band World. 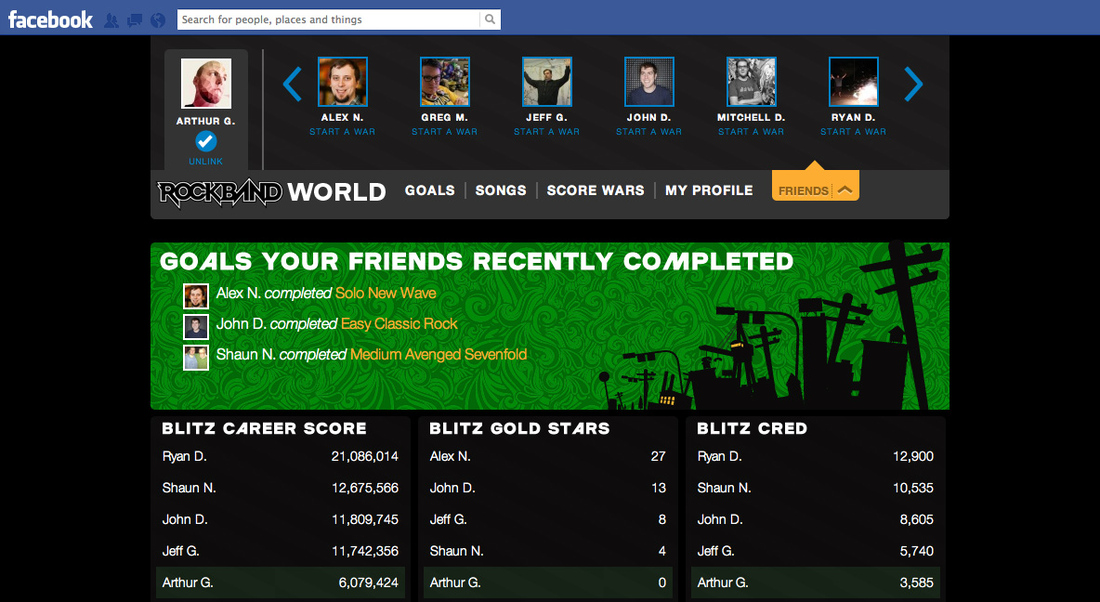 Using Rock Band World, you can join score challenges worth additional points and Coins (which pay for power-ups - did I mention that they're single-use?), challenge your friends to score wars over specific songs, and engage in other community-driven activities.

The addition of such heavy Facebook integration would be great, if not for how heavily Rock Band Blitz leans on it. Some things that are easy on Facebook are inexplicably limited within the game itself. Score wars? In Facebook, you select from a dropdown menu of friends who have linked the game to their profile and pick a song. In the game itself, you're presented with random songs with random friends to challenge - there's no way to be specific in either capacity, at least that I could find.

There's also no way to join challenges withinRock Band Blitz proper, which is forced coercion of a sort. Outside of completing challenges, the only way to get coins to buy power-ups in the game is to finish songs. The problem: power-ups are 200-250 coins, there are four power-up slots, and finishing a song earns 300-500 coins. Simple math doesn't lie - playing Rock Band Blitz alone doesn't cough up the in-game credits to compete with friends who are reaping currency like crazy through Facebook-exclusive challenges.

Rock Band World works, sure. But there's fundamental functionality that exists outside ofRock Band Blitz, and the minor annoyances of Facebook intrude on the experience. If you don't want to Facebook friend everyone on your PSN or Xbox Live list, then you're stuck with a reduced feature set. It adds inconvenience to a game oriented around compulsive playability.

That's what makes the Facebook intrusion so frustrating. Rock Band Blitz manages to marry the addictive tendencies of both leaderboard-based arcade games and its plastic instrument-oriented progenitors. As Rock Band Blitz channels the same sense of love and excitement of engagement with music that it always has, it uses competition to keep things interesting.

ROCK BAND BLITZ CHANNELS THE FEEL OF ROCK BAND, ALL WITHOUT A PLASTIC INSTRUMENT
But more importantly, it's fun. Rock Band Blitz's multiplier system makes for a frantic game of chicken with checkpoints and the meter on the side indicating how far ahead your closest leaderboard rival is score-wise. And as you're juggling lanes and building up overdrive, all while nailing more hectic note passages, Rock Band Blitz effectively channels the feel of Rock Band proper, all without a plastic instrument. And even after the furor over instrument-based music games has largely burned away, it's great to rekindle that kind of excitement and sense of musicality.

Our review of Rock Band Blitz 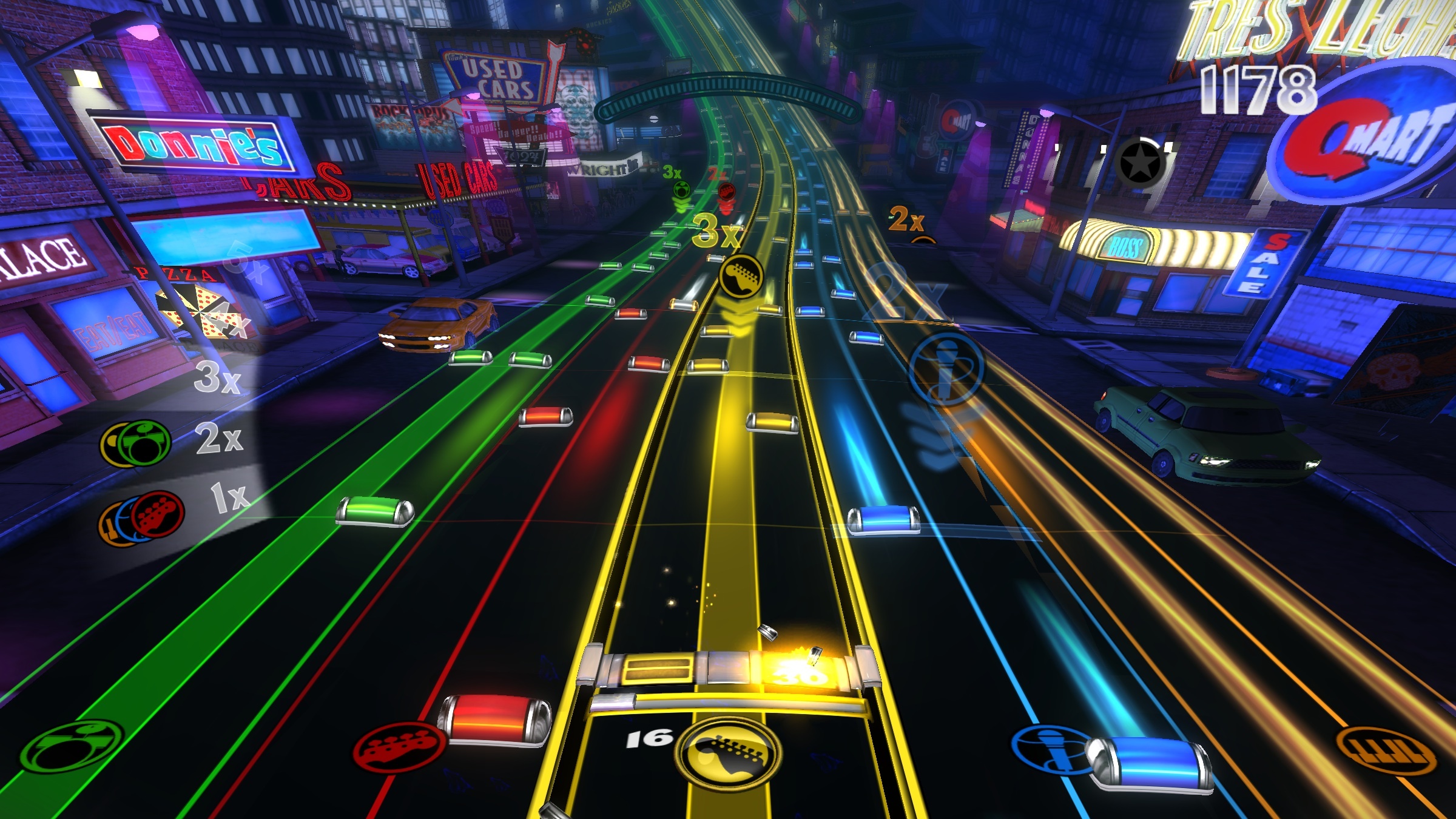