Constantly changing things up, Transformers: Fall of Cybertron successfully stands out from the shooter crowd.

War for Cybertron pulled off a surprising feat for an off-the-radar licensed title, nailing the shape-shifting dynamic of said robots in disguise and using it to make a shooter that felt different from everything around it. It was fast, it was violent, and it sold Transformers like no other game ever had.

Ignoring 2011's disastrous Dark of the Moon - and really, let's do that - Fall of Cybertron marks High Moon's second crack at the Transformers prequel universe it created, and it has managed an impressive second act. The fundamentals present in War for Cybertron have returned (minus one surprising omission) but High Moon has gone several steps further. By consistently adding new quirks and gameplay hooks and broadening its scale, Fall of Cybertron would shine as a unique shooter without the Transformers fan service. 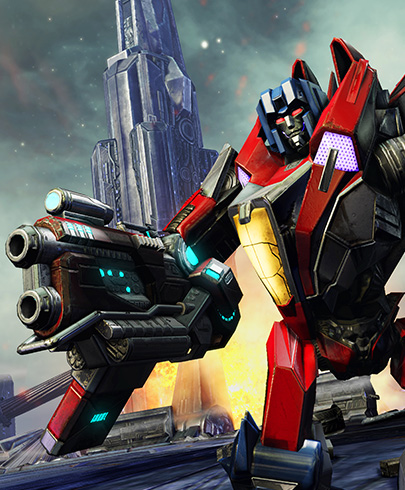 Fall of Cybertron resumes more or less immediately following the conclusion of War for Cybertron. The Autobots have written off their home planet after its core has ceased producing Energon, while Decepticon leader Megatron wants to rule over his entire race and conquer new worlds in his quest to restore Cybertron's spark. It sounds complicated, and, I'll admit, a little dumb. But Fall of Cybertron builds a ridiculous premise around a weekly 20-minute excuse to sell toys, and it even manages to land a little bit of gravitas here and there.

Fundamentally, Transformers: Fall of Cybertron is a non-cover-based third-person shooter. The lack of cover forces a more aggressive style of play hinging on movement and melee attacks rather than stopping and popping. You can also transform from robot to vehicle at any point, lending another layer of options and mobility.

It all comes together as you're forced out of the hiding-place comfort zone of so many other shooters, using your vehicle form to cover ground and smash into your robotic prey, blasting enemies on the other side of the field. Fall of Cybertron expects all of your abilities to be used, and the difficulty curve is aggressive, to be kind.

It's one of Fall of Cybertron's biggest liabilities. There are several points where it's easy to fall into a recursive death loop with little recourse other than screwing it up a little less on the next try (though the egregious checkpoint issues of War for Cybertron have been addressed). Almost as jarring are the frequent frame-rate drops that pop up when things get particularly crazy, which is a problem given how aggressively High Moon pushes the number of enemies and explosions in Fall of Cybertron.

But these complaints are overshadowed by High Moon's smart design decisions. Fall of Cybertron's greatest strength is its constant introduction of new gameplay quirks and abilities. While the basic gameplay systems remain the same - shoot, transform, melee - each chapter introduces a new wrinkle. Some Transformers can turn invisible; some can lasso onto elements of the environment; some fliers have two vehicle forms, a chopper and a jet. The new abilities break up the basic gameplay pillars and keep things from getting repetitive. It helps keep levels from overstaying their welcome, though this is also helped by a fairly brisk pace punctuated by some very large-scale set-pieces.

While War for Cybertron seemed to take place across a single swath of the Transformers' home, Fall of Cybertronseemingly covers much more ground. And that new ground often brings significantly larger, more open environments. It's a world built for giant machines to beat the crap out of each other and blow things up, and in that regard, it works quite well. 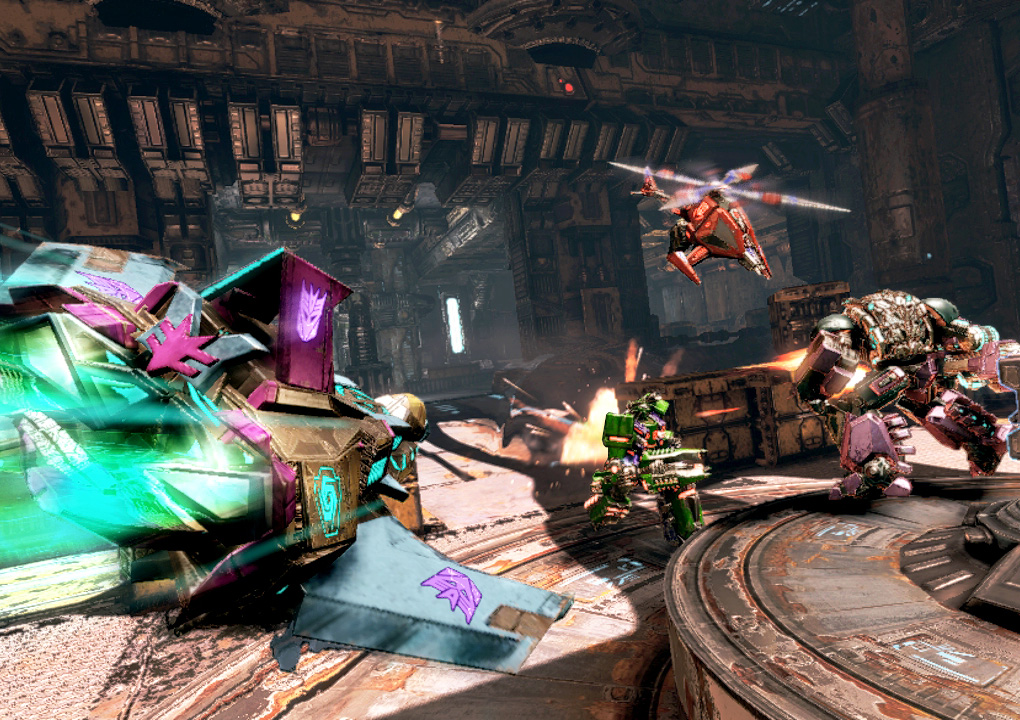 War for Cybertron's campaign was fun, but its multiplayer stole the show - at least at first. The constant shift from robot to vehicle and the variations thereof led to unpredictable, fast encounters and an emphasis on mobility that hearkened back to Quake 3 and Tribes. With giant robots.

Unfortunately, the rapid attrition rate of online shooters not called Call of Duty, Gears of War, or Halo (as well as middling sales) doomed War for Cybertron to rapid obscurity. The player base dwindled to thousands (or less) within weeks, and balance issues that appeared were never properly addressed.

It's difficult to predict whether history will repeat itself with Fall of Cybertron, though that would be a shame, given how much fun its multiplayer is.

The basic conceit is the same - there are four classes available, each with their own niche to fill, whether the hit-and-run role of the scout or the medic-oriented duties of the scientist, and each class has its own vehicular category. The aerial Transformers' ability to remain indefinitely aloft defines the battlefield on the x and y axes in a way that not many shooters pull off. The mobility factor makes for rapidly shifting momentum, and more importantly, there's always something to do, and the period between spawning and mixing it up is brief.

Returning War for Cybertron players and hardcore Transformers nerds will enjoy the revamped character creation, which allows for mixing and matching a toy store's worth of parts while customizing your loadouts. The returning Horde-alike Escalation mode has also been tweaked, with wider playgrounds and more varied enemies to take on. The addition of environmental hazards and traps - which can be used or despised, depending on the moment in question - add some unpredictability and new tactics to things. Most importantly, it's fun, though the difficulty ramps up to an absurd degree, even on easy. If you're not playing with a communicative, capable team, then it's not even worth wading in.

But the elephant in the room remains, and it's one I can't address one way or the other: CanFall of Cybertron hold its audience? I hope so - Fall of Cybertron's multiplayer is something exciting and different. But I'd advise caution on becoming too invested, given the lessons of history.

That sense of scale is put to good gameplay use as well - Fall of Cybertron has a new focus on the heavy hitters of the Transformers universe in a very literal sense. Early on while playing as Optimus Prime, you're given the task of commanding the transforming city Metroplex to flatten the Decepticon opposition, while the Combaticons later combine to form the massive Bruticus, who towers over Cybertronian architecture and Autobots alike, laying waste to both. Bruticus isn't as versatile as his component robots, but for the brief periods you use him, the giant robot fantasy helps sell the power hierarchy in the Transformers fiction. 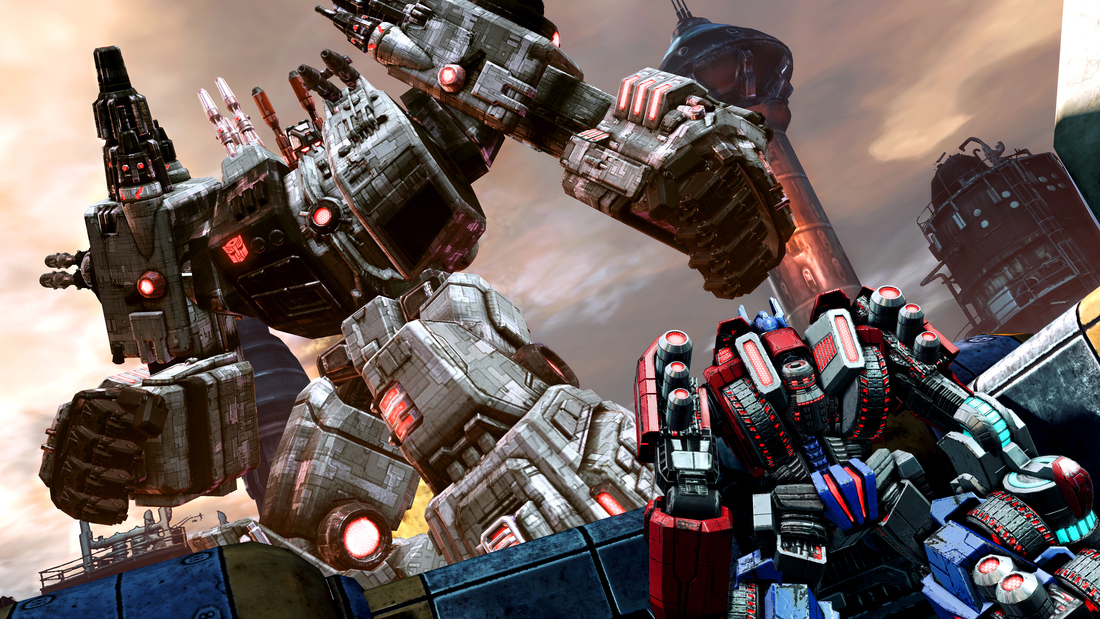 That seems like a little (big) thing, but it's symbolic of the very effective ways in whichFall of Cybertron leverages the Transformers license. Each character you control as you switch between the Autobot and Decepticon perspective throughout the campaign feels notably different in control, in play, and in the power dynamic between that character and their adversaries. Bumblebee doesn't feel like Optimus, Jazz plays differently from Cliffjumper, and Megatron requires a different approach compared to Grimlock.

It all adds up to an action game that escalates in just the right way to keep things moving, and things change often enough to maintain a sense of discovery throughout. In the only step backward Fall of Cybertron makes from its predecessor, you'll be doing it alone. The three-player co-op of War for Cybertron has been excised. It could be argued that this was a level design issue as much as anything, given the new focus on unique, Transformer-specific elements throughout Fall of Cybertron, but it's still disappointing to have to take on those bigger levels on your own.

The disappointment of flying â or driving â solo notwithstanding, Transformers: Fall of Cybertron's relentless iteration on its own design and its constantly expanding scope set it apart from other third-person shooters. While Transformers fans â like me â will bask in the escalating glow of their favorite series done well, everyone else should be interested in something dedicated to being different while still getting it right.

And jumping into the air and transforming into a jet before blasting off into the distance? Still awesome.