Mechromancer turns Borderlands 2 into a deadly game of math

Share All sharing options for: Mechromancer turns Borderlands 2 into a deadly game of math

When the bot-summoning Mechromancer class hit Borderlands 2 this morning, it brought with it a little bit of controlled anarchy and a whole lot of math.

Used correctly, the Mechromancer's most difficult upgrade path changes the way you play the game, forcing players to carefully calculate when to reload guns while trying to strike a balance between accuracy and damage.

Gaige the Mechromancer's base ability allows her to digistruct a bot named Deathtrap. The bot, once summoned, runs around pounding and clawing enemies to death.

But early on, as with every class, players have to decide which path they want to take while upgrading Gaige's Mechromancer abilities.

The Best Friends Forever upgrade tree is designed for casual players, Gearbox spokesman Adam Fletcher told me. This is the path that bumps up Deathtrap's defense and attack abilities.

The Little Big Trouble tree adds a lot of shock damage to Deathtrap, allowing him to do thing like blow up in an electrical storm, turn his eyes into lasers or catch enemies on fire. The coolest ability, Make it Sparkle, allows Deathtrap to absorb the elemental ability of the weapon the player fires into him. So if you shoot him with a gun that does fire damage, it grants Deathtrap the ability to deal fire damage when he attacks.

By far the most interesting, and complex, upgrade tree is Ordered Chaos.

The first skill in this tree seems to be the most important.

Anarchy increases the damage of your weapon and decreases the weapon's accuracy by a set percentage every time you kill an enemy or empty your weapon's clip without reloading. And the ability stacks. It stacks all of the way up to 150. If you forget and manually reload, you reset the ability stacks. So that means if you max out this ability and manage to go through 150 automatic reloads without accidentally manually reloading at some point to switch out a half-empty clip, you will be doing 266 percent extra damage with a weapon that has 266 percent less chance of hitting what you aim at.

If that weren't complicated enough, the skill can get modified with other skills in the tree. The most important one to grab next is Discord. With this ability, manually reloading doesn't completely reset your Anarchy stacks. Instead it starts to decrease the stack one a second. Each time you lose one of those stacks your weapon's accuracy and fire rate increases and your character regenerates a bit of health. This ability will keep ticking through your stacks until they're gone. Unless ...

Unless you manually reload a second time, which turns off Discord and restarts your Anarchy ability with whatever stacks you had left at the time. So it's sort of an on / off switch.

The key, Fletcher tells me before I take all of this math for a spin, is to find the sweet spot. You're likely not going to want to have a maxed-out weapon in Anarchy. Instead you're going to sort of float around in the 70s to 80s, using the extra Anarchy to heal up and increase your accuracy when you need it.

This twist adds a whole new feel to what I had thought was an overly familiar game.

I am, by my nature, a compulsive reloader. I reload when I'm in cover, when I clear an area, sometimes in the middle of firefights if I think I have time. It's second nature to me.

Suddenly trying to not reload, even when a message pops up telling me to do it, added a delightful little mini-mind game to the mix. 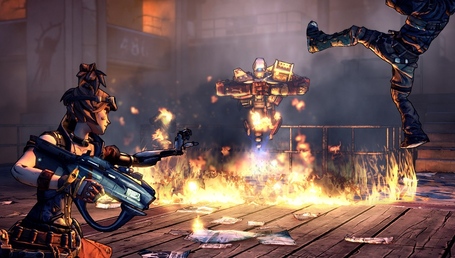 Even after I mastered - well, sort of mastered - not manually reloading, using that Discord ability to effectively keep me in the stat sweet spot took up a surprising amount of attention. Suddenly I was waging two strategic wars; one against the enemies on the screen and the other with the tide of damage adding, accuracy depleting Anarchy ticking away every time I did a manual reload.

To top it off, this ability really makes you burn through bullets. I started forming the nasty habit of firing off shots into the air after a fight to force the reload and bump up the Anarchy. It was a great way to increase the ability, but it also ate through a lot of my ammunition.

And there are other ways to use that stacked up Anarchy.

The top ability in the tree is With Claws, an ability that grants you claws that both deal damage and heal you, but also eat away at your Anarchy.

Adding new classes to an already released game is a nice touch, but adding a class that trains you to play the game inherently differently doesn't just deliver more choices; it freshens up a game that some people may have already finished playing.

The class hit early this morning and costs $9.99 or 800 Microsoft points; however, if you pre-ordered the game at a participating store, it's free.