Despite some rough spots, Spec Ops: The Line delivers on a mature narrative with something to say.

I've been thinking off and on about Spec Ops: The Line since about five minutes after I finished it.

Spec Ops: The Line doesn't lend itself very well to the sort of practical, birds-eye view that typically dominates game reviews. Developer Yager seems to have other things in mind, and more specifically, something to say about the subject matter it explores - the modern warfare shooter.

With that in mind, my opinions have to be qualified - is it most important that a game has more to it than the basic joy of well-implemented shooting mechanics, or good level design, or a refined checkpoint system? Can a game with a clear narrative goal compensate for other shortcomings that might relegate a less fictionally ambitious game to also-ran purgatory?

In the case of Spec Ops: The Line, I think the answer to the latter question is yes.

Spec Ops: The Line starts six months after the worst sandstorm in memory wiped out the Emirate of Dubai. Delta Force Captain Martin Walker and his team are in country to investigate the ultimate fate of Dubai's surviving civilian population, and The Damned 33rd, the Army brigade who assumed responsibility for leading those survivors out of the city as the storm struck.

Walker arrives to find The Damned embroiled in a civil war with a faction known as The Exiles, and the Delta Force team are quickly caught in the middle. The 33rd's CO, Colonel John Konrad, has a history with Captain Walker, and Walker's hero worship of Konrad serves to muddy the waters of just what Walker and his men have been sent to Dubai to do.

MORE THAN ANY OTHER SHOOTER, A QUICK KILL IN SPEC OPS SEEMS LIKE A MERCY 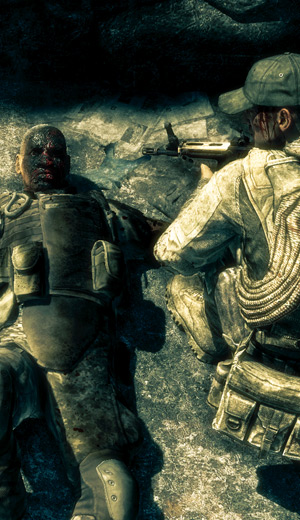 At first glance, Spec Ops: The Line is just another third-person military shooter, albeit one with particular gun balance. While the cover system and movement aren't anything new, shooting in Spec Ops is different. Guns pack a lethality beyond the pellet gun antics of other shooters - it doesn't take more than a few shots from an M4 to most enemies, and single headshots are fatal to unarmored opponents. But it's as much the visual consequences of violence that set Spec Ops apart.

Heads explode when shot, limbs fly off amidst explosions, arms can be severed by gunfire, all underpinned by an almost melancholy score. Incapacitated enemies often aren't dead, and if you want the valuable ammo and resources they carry, you'll be prying it from their cold, dead hands, whether by calculated shots from a distance or executions in close. Otherwise, they writhe in agony as the battle goes on around them, more victim than triumph.

Spec Ops: The Line builds on this idea throughout. Violence and death are everywhere, but any superficial bravado about it is quickly scrubbed away by a tangible sense of horror - and at various periods hailstorms of white phosphorus. More than any other shooter I've played, there are moments where shooting an enemy in Spec Ops seems a mercy as much as anything else.

And amidst any number of shooter cliches - the turret sequences, the on-rails vehicles sequences, the "heavy-gunner that takes more bullets" moments - that's the rub: Spec Ops: The Line is actively involved in turning you against the drive behind games like this. You'll shoot hundreds, maybe thousands of "enemies," but by a few hours in, the characters' uncertainty over what they were doing, their angst, for lack of a better term, was my own.

Spec Ops has very functional combat, and level design that propels you forward in a very aggressive way, rewarding tactical play and reflexes with "good" results. But I have to use quotation marks here because I almost never felt good about anything I was doing in Spec Ops: The Line. And when I did, it was for the briefest of moments, at which point that sort of savage delight taken in virtual combat was flipped on me, painting me as ... well, villain would be too simple.

None of this feels accidental. Spec Ops: The Line intends to paint a picture of the horror of war, of the murky non-morality of all of it, while also telling the story of the ultimately destructive results that stem from the best, misguided intentions. And in a successful bid to make it all the more effective, you'll play a major role in that lesson that you won't fully understand until the credits roll. Yager positions the conventions of video game presentation against you, which takes a surreal turn toward the end. To elaborate more would be to lessen the impact.

Spec Ops: The Line's writing and voice acting do the heavy lifting otherwise. Nolan North puts in a strong enough performance to leave behind the Nate Drake association after an hour or so, and everyone else sells their part well enough. Visually, the Dubai setting allows for a bizarre sort of mid-apocalypse view of the death of Utopia, or at least, how absurdly rich oil families might build Utopia. 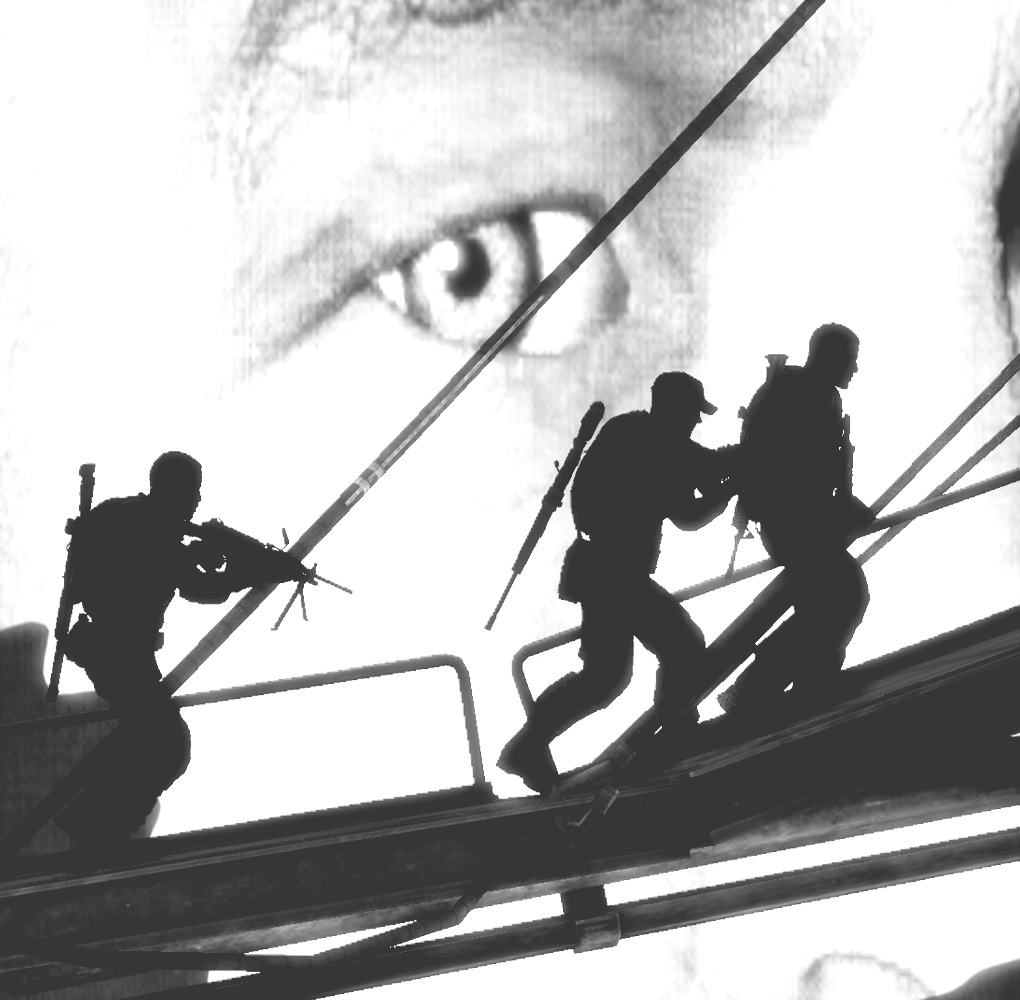 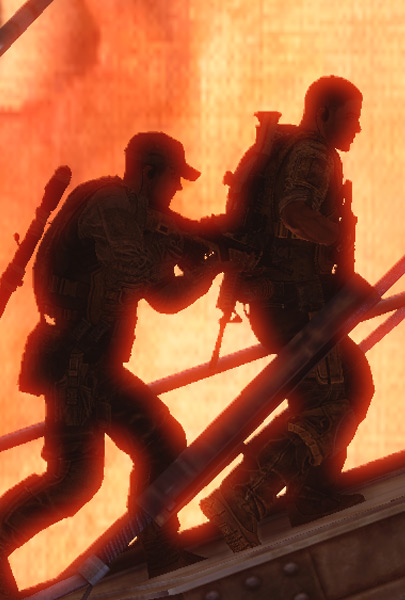 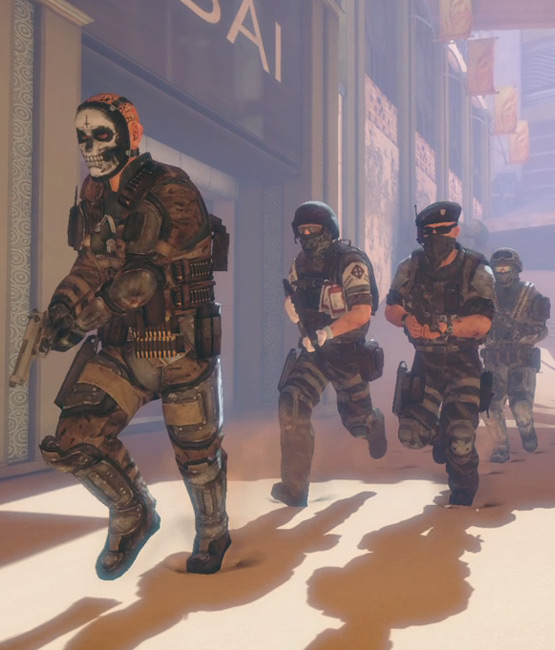 Spec Ops: The Line's multiplayer component covers what it absolutely has to in 2012. There are seven classes (one unique to the Damned 33rd and Exile factions each), there are perks, levels, experience, and all that. But there are a number of things acting against it.

Weapon balance is just as skewed toward lethality as the campaign, meaning quick death under fire and limited opportunity for new players to get a chance to learn any ropes prior to being wiped out, and controls that feel a little sluggish here and there in single player are just plain laggy in MP, which all amounts to a lot of frustration.

Worse, animation and movement in Spec Ops: The Line online are prone to sporadic problems due to network performance, and suffered system-freezing moments during my time with retail code. More frustratingly, there are already numerous videos on YouTube of players glitching Spec Ops' multiplayer, getting thousands of points per kill, using infinite ammo, and more. 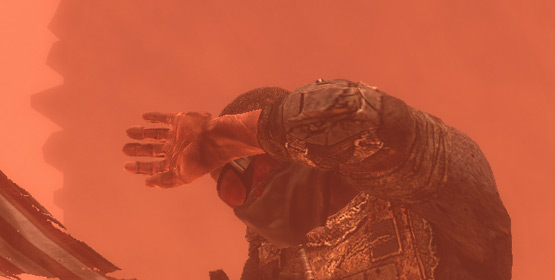 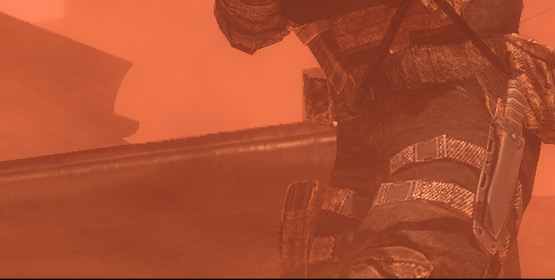 Not everything is so well realized. While Spec Ops: The Line's combat works well, the emphasis on lethality cuts both ways, and players will likely die often. This is a particular problem in light of the extended post-death load times, and the miserly checkpoint system that only gets more tight-fisted as Spec Opsgoes on. This unfortunate loop is actually used to great narrative effect later in the game, but otherwise, it knocks the wind out of Spec Ops'pacing.

Yager uses video game conventions with good intentions, but they serve to break the dark spell that Spec Ops: The Line casts as effectively as the difficulty spikes. Collectibles found throughout levels might as well have a neon-lit sign that says "VIDEO GAME NARRATIVE," and they're often found next to scenes set to have particular emotional impacts. I understood the desire to develop the fiction, but after finding most of these collectibles, I don't remember a one that seemed so important to the story that they justified how jarring they are. Other minor details, like characters using their bare hands for the ziplines that connect the husks of Dubai's skyscrapers, hurt Spec Ops' suspension of disbelief, which is a problem, given how closely the rest of Spec Ops hews to its narrative goals.

Still, the story that Spec Ops tells goes so far beyond the jingoistic odes to nebulous war-time duty that it almost seems necessary to play. I don't know if I can say Spec Ops: The Line is fun, exactly. The power-fantasy catharsis behind other shooters buckles under the weight of Spec Ops: The Line's story of mistakes made and the consequences of intentions. And against very steep odds, Spec Ops: The Line succeeds in what it's trying to do. I wasn't happy that I played through Spec Ops: The Line, but I am glad that I did. And maybe we should be able to make that distinction more often.