Share All sharing options for: Obsidian's 'Project Eternity' RPG benefits from the freedom of crowd funding

In an interview at GDC Online, Avellone explained that crowd-source funding wasn't just the best option for getting the game made; it's the only option. One issue is the studio's resolution to developing the game solely for PC, Mac, and Linux, a narrowly-tailored release strategy that clashes with the multiplatform approach most publishers follow. Moreover, Avellone says that the kind of role-playing games Obsidian creates have fallen out of fashion somewhat.

"It's really also hard to sell this type of role-playing game in today's role-playing game market," Avellone said. "I think the expectations have changed, and I think there's a percentage of the RPG audience that remembers the Infinity Engine games and likes them, but I don't know if that's the zeitgeist of RPGs nowadays in terms of what people expect from them."

Avellone explained that RPGs are effectively on a gradient: One one side, players have the greater share of control over their character's every attribute. On the other side — the side many current RPG developers favor — the game's creators make those kind of decisions for their players.

"I feel like the designers put more of their mark on the characters," Avellone said. "It's hard to say. When you're dealing with Shepard in Mass Effect, you do get customization options with Shepard, but ultimately, at the end of the day, he's still speaking with one voice, or with the female voice, and that's who he is. In essence, that sort of sets a level of fan expectation right there that's difficult to sell a game that's not like that. Even Skyrim, to an extent, they kind of left their mark on characters with the advertising campaign in terms of his looks and his silhouette that I think people immediately start leaving a mark on him in that respect.

"There are always some elements that you have to design around, you always have those constraints," Avellone added. "But when it comes to my character, I get a little sensitive about it."

The effects of crowd-funding the development of Project Eternity have been nothing but positive, Avallone said. The development team is overjoyed to share what they're working on as they're working on it, and in turn is bolstered by the community's immediate feedback. That feedback has come in the form of suggestions for the game's artistic and systemic design — sometimes even volunteer work on the game's environment and character art. 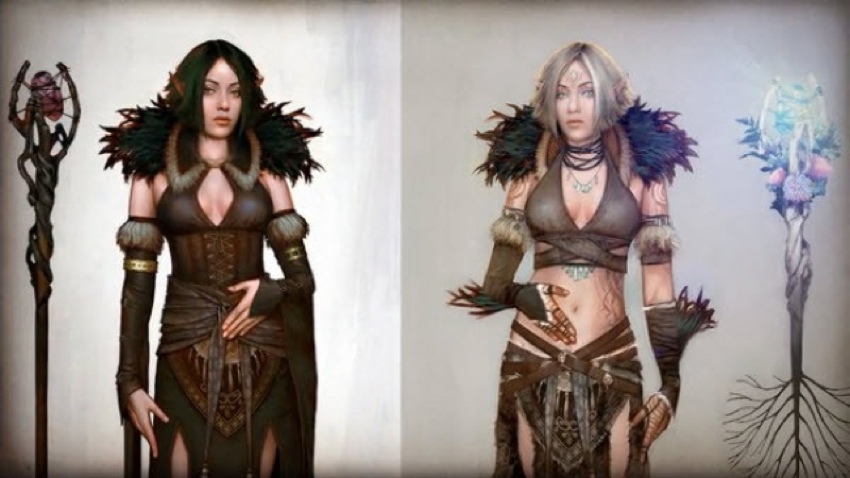 Avellone was never worried that their input would evolve (or, as the case may be, devolve) into a sense of funder's entitlement.

"Their sense of entitlement wasn't really 'Oh, you must have this,' it was more like, 'Here's what we feel about this,'" Avellone said. "Like, they didn't want social tie-ins, for example, and like, if you don't want that, and you don't want to back a project that has elements like that, there is absolutely no need for us to put that in. We're absolutely fine that you're telling us this now, and not two months before ship, which is normally how people react to things like this with today's publishing models."

Aside from that feedback, the team at Obsidian has almost no external input on what kind of a game the studio is going to make. Starting with a clean slate has its fair share of benefits and problems, but before weighing them against one another, Obsidian had to decide what kind of an RPG it wanted to create. That core inspiration, Avellone explained, came down to one question.

That level of freedom often carries with it a kind of developmental paralysis, as constraints — commonly established by a publisher or the franchise in which a game is set — help focus every single aspect of the game development process. Obsidian is used to dealing with those kinds of restraints, but Avellone says he isn't worried about Project Eternity getting hindered by freedom.

"I don't think that our studio is ever in danger of getting lost in the woods when it doesn't have a franchise parameter around it," Avellone said. "That's never really been a problem for us. In some instances, some folks might need those parameters to help them focus, and sometimes having bookends like that helps you design more creatively within the box. But we've been doing RPGs for so long, we know what those scope constraints are. Now we get to express ideas that we just think are cool, period, without any sort of obstruction. It has our voice, I guess is the best way to put it."

That voice belongs to other RPG development veterans like Avellone, including Arcanum: Of Steamworks and Magick Obscura project lead Tim Cain, and Black Isle Studios head Feargus Urquhart. Obsidian has put together something of a supergroup of RPG visionaries, and Avellone said that the group hasn't stopped looking for new members.

"We made a list of people that we want to get to contribute to the project, and we've been sequentially asking them one by one if they would come aboard and help us out with it," Avellone said. "Hopefully, it will bear fruit."