How Obsidian expanded the Fallout: New Vegas universe with 10,000 lines of dialogue

Share All sharing options for: How Obsidian expanded the Fallout: New Vegas universe with 10,000 lines of dialogue

The creation of narrative probably seems like a process that requires the freedom and openness for the author to do whatever they want with the story they're crafting — but when the writing team at Obsidian Entertainment was charged with penning the four downloadable expansions to Fallout: New Vegas, they were given a hard limit for the amount they were allowed to write.

For all four DLC packs, there could be no more than 10,000 lines of dialogue total.

That may sound like a sufficient amount, at first blush. That would allot 2,500 lines for each four-hour add-on, only slightly less than the 3,000 lines of dialogue that appear in an average motion picture. However, 10,000 lines of dialogue is a fraction of what appears in an average full, open-world video game. Mass Effect 2 had around 30,000 lines. Fallout 3 had 40,000. Grand Theft Auto IV had a staggering 80,000 lines of dialogue. Creating downloadable content for Fallout: New Vegas required the same amount of speech as these full fledged titles, but its piecemeal nature and smaller price tag mandated a smaller budget.

According to Obsidian Entertainment chief creative officer Chris Avellone, who spoke during GDC Online about the process of writing the Fallout: New Vegas DLC, conceptualizing, coordinating, writing, and recording dialogue is an incredibly expensive process. Obsidian's limited time and resources had to be maximized with creative approaches to writing — even if that meant writing no dialogue at all.

"I will admit one bit of trickery I did was, because we had a limited number of voice lines, we started doing things like making some of the main characters mute," Avellone said. "So they'd only do like, hand gestures and symbols and non-spoken text. We were only able to get away with that for so long." 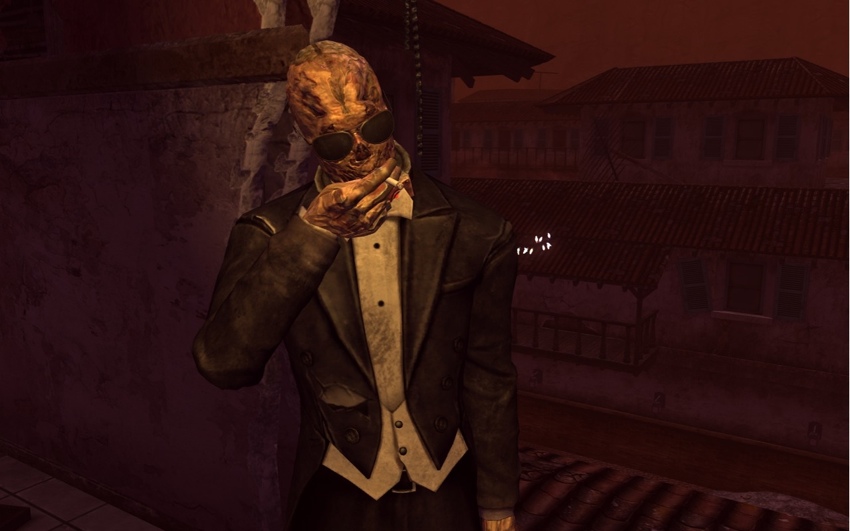 The studio had to streamline the voice-over recording process as much as possible to stay under budget. That process involved sending casting directors extensive rundowns on specific characteristics Obsidian desired for each voice actor. They then worked with the actors to give as much background on the characters in as little a time as possible, and passed along a script that had been annotated to provide important context to dialogue — things like intended tone and pronunciations of esoteric terms were bracketed, and placed in the script.

"All of these things are important because they're going to save you time when you're recording at the studio," Avellone said, "because studio time is incredibly expensive, and the last thing you want is some actor spending five minutes debating this line with you trying to get it fixed, when you have 300 more lines left to read and you have no idea how you're going to get it done."

Bethesda requires a process called "text lock" for each of their titles, during which the script is essentially frozen for two weeks and checked for problems. Every line of dialogue is combed for errors, quest text is examined for logic flaws, voice sets are lined up against dialogue to make sure that voice overs and subtitles match. Everything is examined, from major NPC conversations to "barks," the reactive dialogue that characters shout during gameplay. Each character has 35 to 50 barks, Avellone said, which further ate into the team's 10,000 line total.

Of course, all the preparation in the world can't account for how the interpretation of the script can change during the voice recording process.

"There is a chance the line changed at some point when the actor said it, they may have had a better take on it," Avellone said. "They may have switched words around. So, you want to make sure that for the purpose of subtitles, you managed to get the dialogue and subtitle matched perfectly.

"If anything has changed significantly in the studio, and hopefully it hasn't, you have to let the rest of the world know for the purpose of localization, because it's actually being recorded in seven other languages. You have to know immediately whether any line has changed according to context, and chances are, you may not have the liberty to change that line, which can create other problems."