Mann Up a little harder

The cooperative Mann vs. Machine mode for Team Fortress 2 gets an update today designed to appeal to players who find the robot-slaying gameplay either too difficult or too easy — or lacking in wearable blood-covered robot heads.

Now, in addition to the "Operation Steel Trap" Tour of Duty in Mann vs. Machine mode, Valve has added "Operation Oil Spill" and "Operation Gear Grinder" missions, which are less hard and very hard, respectively. To complement the new difficulty options, Valve has added new loot drops in the form of newly skinned robot heads. Players of the intermediate level Operation Oil Spill can score rusty, blood-drenched robot heads while those who prefer the expert-level difficulty of Operation Gear Grinder can win 24-carat diamond robot heads.

Of course, those loot drops will only occur on official "Mann Up" servers, which require Tour of Duty Tickets purchased from the in-game Mann Co. Store to join. Here's what those 'bot heads loot looks like. 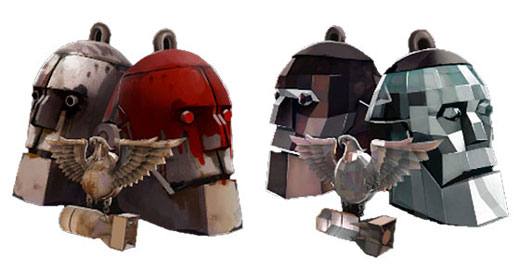 Valve is also promising improved matchmaking for TF2's Mann vs. Machine mode, letting players select from multiple Tours of Duty at once in order to "maximize the chances of finding compatible players as quickly as possible." Additional details are available at the official Team Fortress website.