I QUESTION WHETHER IT'S FAIR TO CALL THEM ENEMIES SINCE MOST OF THE TIME THEY RUN AWAY WHILE YOU SHOOT THEM...

Dangerous Hunts 2013 is the first game I've played that asks you to moisten your hands before starting.

Its tutorial says you need to hold the packed-in "Top Shot Fearmaster" gun a specific way or it won't work properly. Its box art highlights the Fearmaster on both the front and the back. And the contents sticker on the side of that box lists the Fearmaster first and the game second.

All this sets you up properly, because unlike most games, the interface here matters as much as the content. And the game's best and worst qualities are tied directly to its interface.

You kill the animals. They disintegrate. The game doesn't explain why. You move on.

As this year's "action" entry in the long running Cabela's hunting series — the "strategy" one being Cabela's Hunting Expeditions — Dangerous Hunts 2013 centers around a story mode where you run through various locations fending off lots of angry wild animals. It's a 3D shooter where you move with an analog stick on the back of the gun, and aim the gun to turn, which takes a bit of practice if you haven't used those controls before. You kill the animals. They disintegrate. The game doesn't explain why. You move on.

The big new idea this time around is that the game reads your heart rate through two sensors on the Fearmaster — thus its name — similar to indie horror game Nevermind or what Nintendo was planning with its Wii Vitality Sensor. And then the game mixes that data with how much you shake the gun.

In practical terms, this works in two ways — first, as an on-screen heart rate meter that shows up when you zoom-in with certain guns, which gives you a bonus zoom if you can keep the number low enough. And second as an extension of a basic feature included in most modern shooters, where if you aim carefully your shots will deliver more damage than if you spray your reticule around the screen — here you get a bonus for keeping a "steady shot."

"I question whether it's fair to call them enemies since most of the time they run away while you shoot them..." 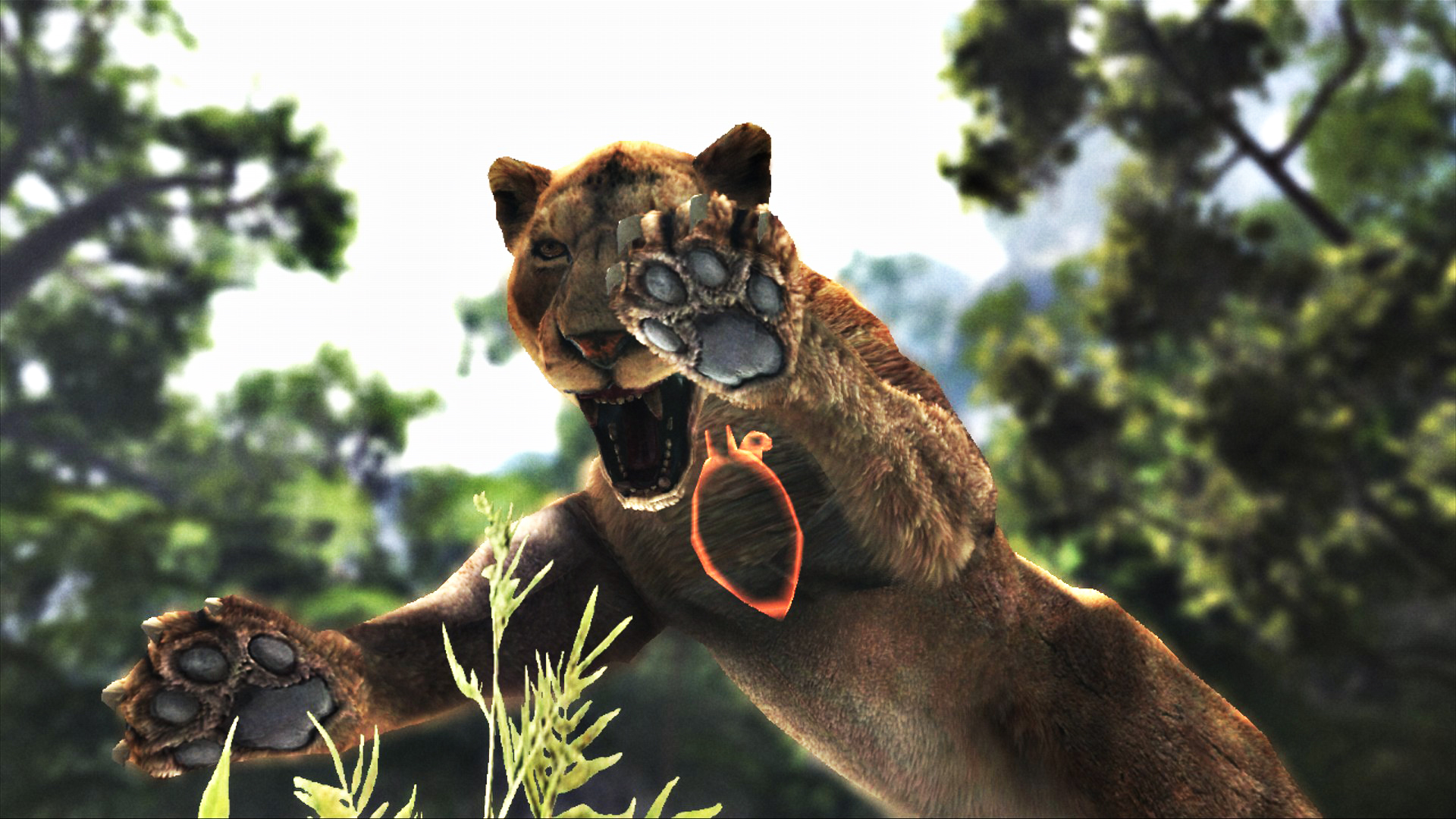 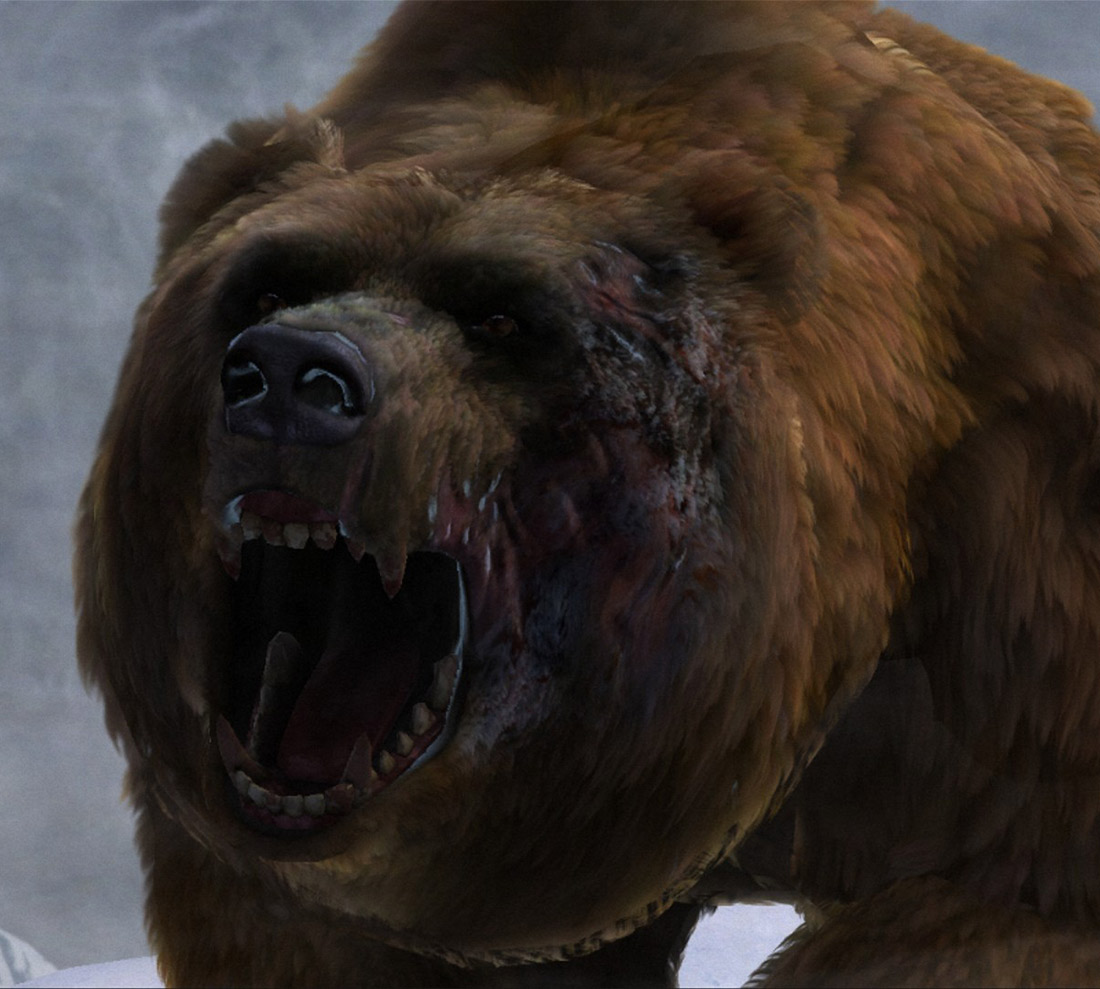 This all works so well that it initially seems like a great concept to base an entire game around. You can easily bump the heart rate meter up and down by running in place or holding your breath, and the steady shot concept plays well with the idea that the gun reads your fear level. When you approach an enemy from a distance, you can take your time, zoom in by breathing carefully, and see vital spots on animals to kill them each in one shot.

The more Cabela's Dangerous Hunts 2013 shows off its key feature, the less comfortable it is to play

Cabela's Dangerous Hunts 2013's interface is the problem. For the Fearmaster to read your heart rate, you need to place your hands on two silver panels on the gun — one behind the trigger, and the other under the barrel. This is where the "moist hands" come in, since the game has trouble reading a player's pulse if they have particularly dry hands. Easy enough to do, but it's a slightly uncomfortable arm position that becomes more uncomfortable the longer you hold it. The game compensates for this by limiting the number of scenarios where it recommends you use the heart rate, and providing lots of breaks over the course of the story mode. But it's caught in a Catch-22 where the more it shows off its key feature, the less comfortable it is to play. And it doesn't help that the heart rate functionality isn't necessary — you never need to use it, and the game is very easy on its default difficulty setting, where you can often just run past enemies. 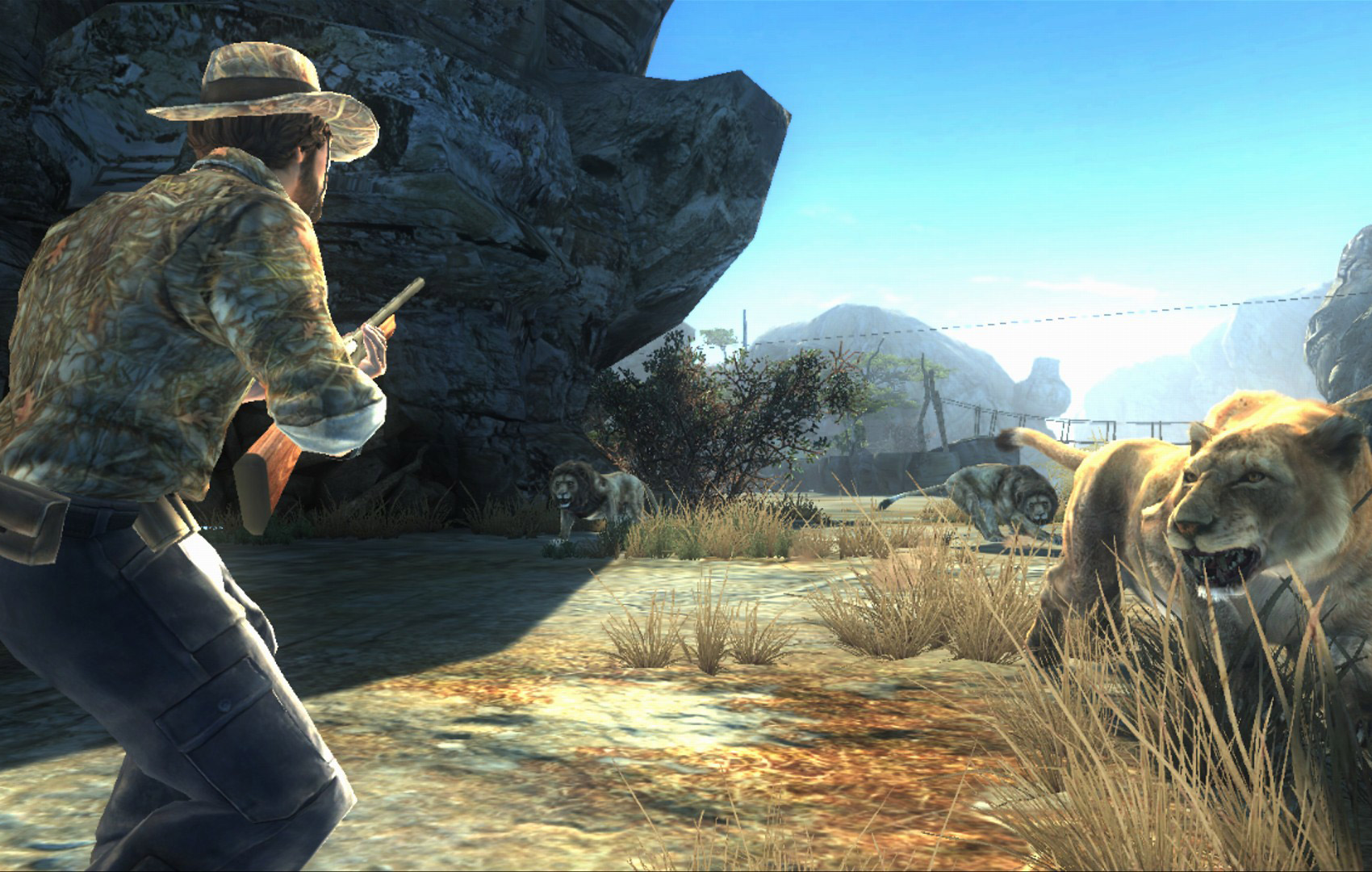 Complicating things further, to jump or reload you need to use the D-pad, which is located on top of the gun barrel — and requires those of us without pro-athlete hands to awkwardly change hand positions to press. The game seems to take this into account in some ways, since you rarely need to jump when there are enemies around, so your hands don't need to be in two places at the same time. In other ways, it's confusing, like how you grab health packs and ammo pick-ups by walking over them, but grab collectible antlers by walking over them and pressing down on the D-pad. Every time I did it, it reminded me of the strange D-pad placement and took me out of the experience.

The story mode isn't the entire game. Maneater, a co-op mode where you fight enemy waves, struggles with many of the same control problems. But the "shooting gallery" mode avoids most of them by breaking the game into on-rails segments. Here the controls are cleaner, because you don't move manually and enemies take fewer shots, though I question whether it's fair to call them enemies since most of the time they run away while you shoot them — you don't defend yourself like in the story mode, apart from the occasional wolf or tiger that rushes the screen, so there's less context and justification for shooting them.

Mechanically, though, the shooting gallery works well. It's streamlined — there's no heart rate tech used here — but it runs smoothly and makes for good score challenges. You could do a lot worse, looking for a modern arcade shooter.

Dangerous Hunts 2013 does a lot of smart things to avoid feeling awkward, with its story mode pacing where it gives you plenty of chances to rest your arms between gunfights, its easy difficulty allowing you to get by without using the heart rate functionality, taking over camera control in certain sequences to make sure you see what it wants you to see in the most dramatic moments, and its shooting gallery mode that streamlines the controls.

But each of these masks the main feature that differentiates the game from the others, and the more the game buries the heart beat and stability ideas, the less it feels like something bold and innovative, and the more it feels like a fun little bonus layered on top of an otherwise straightforward game.

We reviewed Cabela's Dangerous Hunts 2013 using a retail Xbox 360 version of the game provided by Activision. The Wii and Wii U versions of the Fearmaster do not include the heart beat and stability sensor features that are in the 360 and PS3 games. You can find information about Polygon's ethics policy here, and see an explanation of Polygon's review process and scoring rubric here.