Dig into the indie roots behind some of the most critically acclaimed portable and downloadable games of the past few years.

Three film graduates from Toronto are packing a rental car with snacks. They'll spend the next 52 hours in this car sweating and breathing as they drive from their Canadian city to San Jose, California.

Fresh out of film school, they're on their maiden voyage to the annual Game Developer's Conference (GDC) to learn how they can get a foot in the door. They'll be inspired, they'll meet their game development heroes and their minds will expand like corn kernels in a microwave. It will be the best thing they ever did. But first: That 52 hour car ride.

"We drove across the country in 52 hours taking shifts," says Friend #1, co-founder and creative director of Capybara Games (affectionately shortened to "Capy"), Kris Piotrowski."We almost died twice, but we ended up arriving at our first GDC in one piece and that kind of sealed the deal for us. It was a crazy, fun thing."

Friend #2 is Anthony Chan, co-founder and lead artist at Capy. Friend #3, who may or may not have been responsible for one of the near-death incidents in the rental car, is another co-founder and president of the studio, Nathan Vella.

"When we drove down to that GDC, we were nobodies trying to get into the game industry," Vella says. On the 52 hour drive back, the three would still be nobodies. But after spending so much time sitting in a car, their feet would be swollen and firmly placed through the door of the industry. 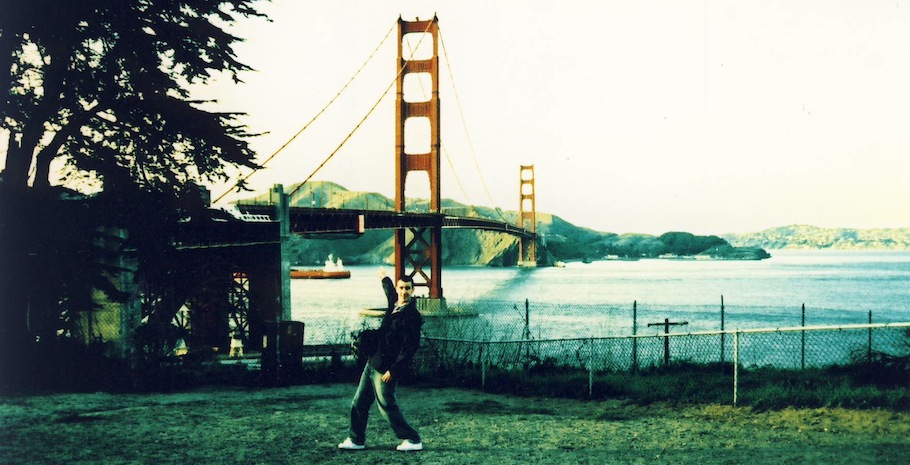 There was a point during the drive from Toronto to San Jose where no developer – indie or otherwise – would have wanted to be in Capy's position. It wasn't so much the stuffiness of the car as much as it was the fact that Vella was right: The three of them were nobodies with no game design training, no funding and no grand vision in mind.

Six years on, they're the envy of the game development world. They lead an autonomous team of 26 developers with all the creative freedom a game studio could ask for. They now fly to game conferences and sweat considerably less. Kris Piotrowski has a thick lumberjack beard. Their games are winning them awards. Really big awards.

In 2008, Critter Crunch won best mobile game and best audio at the Independent Games Festival. They took the Canadian Video Game Awards in 2009 for both Might & Magic: Clash of Heroes DS and Critter Crunch. Sword and Sworcery EP, which they co-developed with Superbrothers and Jim Guthrie, won best handheld game at this year's Game Developer's Choice Awards, beating nominees developed by some of the biggest studios in the U.S. Their upcoming pixel platformer, Super TIME Force, won the 2012 Microsoft XBLA Award.

When you add up the awards, the creative freedom and the beard, Capybara Games is in a good place. But this wasn't always the case. 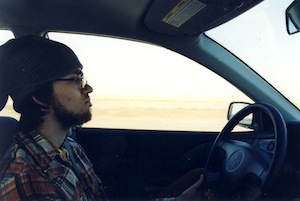 Above and below: Photos from the team's road trip in 2003. 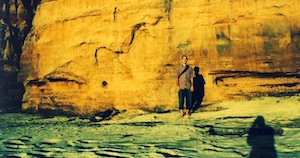 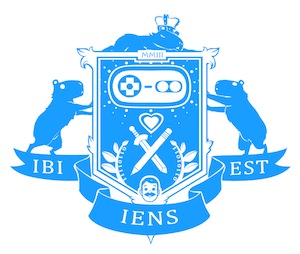 Capybara's crest, drawn by artist Vic Nguyen: "Because crests are kinda awesome," according to the company's website. 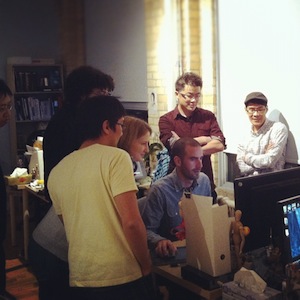 "We spent a couple of years working on games in our spare time," says Vella. "I was editing Canadian television and I'd come home and work on a game for a few hours. We'd just keep doing that until we actually had stuff, and then we turned that stuff into a contract with Disney to make a cell phone game."

For the first few years of their game development careers, the team did work-for-hire. They made games for other people, sometimes several licensed products at the same time for mobile phones.

"We worked in the same building as Jon Mak, who made Everyday Shooter, and we also became friends with the developers who made N+. They were incredibly inspiring – N+ was the first big proof that indies could make money on XBLA before Castle Crashers, before Braid, before any other game," says Vella. "We were really lucky to know those people. We say they're inspiring, but Kris also says it made us feel shame."

"We did feel shame," Piotrowski says. "Because when they were making awesome stuff, we were making four crappy mobile games at once for just licensed contract work. When their games came out, we were like, 'What? You can just make a game that you love and that's a million times more successful and better for you than the stuff we're killing ourselves doing?'

"That was the beginning of us turning the bus in the direction we're in now."

Anyone can point in the direction of a fantastic game and say "That's what I want my studio to make" in the same way anyone can point to the cover of Buns of Steel and say "That's how firm I want to be." Simply wishing does not deliver a studio a slew of IGF awards or steely buns – this, Capybara knew. It was a complete overhaul of their approach to making games and pulling in lessons from a variety of disciplines that powered their bus to their destination.

"We have film backgrounds – we spent more than four years making films and thinking about films and working in that space, so it probably gives us a certain perspective on things that I don't think we'd necessarily have if we went to a game or tech school," Piotrowski says. "We spent a lot of time worrying about those film-type things like aesthetics. I definitely think our background and eye for detail overlaps with what we’re doing in our games."

Vella says that the main thing they got out of their film school education was the ability to critique their own work – a skill that has played a crucial role in shaping their award-winning games.

"We're a ruthlessly self-critical studio," he says. "Our studio culture is: If you have an opinion, say it. Don't be afraid to critique yourself. One of my favorite things is sitting in a meeting with programmers and artists and sound designers and producers, and going from visuals to audio and having meaningful conversations from every discipline, rather than just saying ‘OK, you're an artist so you just do art and that's it.'

"We're a ruthlessly self-critical studio. Our studio culture is: If you have an opinion, say it."

"I think we do a really good job of knowing when something in our game is crap and calling it out as crappy."

There is a joke about Crapybara Games to be made, but the moment passes. Vella continues.

"That's not saying we make perfect games or anything – our games are filled with tons of bullcrap, but we try to stamp out as much as possible."

The two believe that their ruthless edge for crap stompage first peeked its head during their film school years when a photography teacher was so critical of students' work, he'd make them cry. For class assignments students placed their photographs on a communal table for the teacher to assess. He would proceed to walk past the photos, flipping them over, telling students their work was so appalling it was not even worth discussing. As his peers broke down in tears, Piotrowski describes a kind of lightning bolt moment when he realized he had to start thinking about his work critically and that the group-hug mentality of art school was not going to cushion him from criticism.

"After that photography class I realized I actually have to think about my work in the context of what's happening in art and what's happening outside of the little bubble of the school," he says.

"I think that's something we do with our games. We're constantly checking our ideas and our art direction against the best examples. If we're not trying to aim for whatever the height of things are, what's the point? You're naturally going to fall under that. You have to be working within the understanding of what other people are doing at that time. I think that came from that class."

Capybara Games doesn't just compare its work to other independent developers; the studio also compares its games to those of AAA studios despite being a fraction of the size and having a speck of the resources. Vella believes that while its games can't be compared in terms of scope, they can and should be compared in every other way.

"You can't say 'this is the best film made by fewer than 50 people'. That ... means you're purposely trying to be a second class citizen in that cultural scene."

"I don't want to make AAA games; neither of us want to make giant, mega games," Vella says. "We like that we're a small team. We like being able to do weird things. But I think if you don't want people to say things like 'This is good ... for an indie game', you have to compare yourself to AAA.

"I'll look at something like Super Meat Boy or Braid or World of Goo or Limbo or Spelunky or FEZ or Bastion, and these are all games that you don't compare just against indies – you compare against everyone."

During this year's Game Developer Choice Awards, independent games made on shoestring budgets were up against multi-million dollar titles and, in many of the categories, the indies won. When Skyrim won its award, 20 developers from Bethesda got up on stage to accept it. When Sword and Swocery won, it was just Kris Piotrowski, Nathan Vella, and Craig Adams from Superbrothers. They may be a smaller team, but that's not an excuse for being second best, Vella says.

"You can't say 'this is the best film made by fewer than 50 people'. That doesn't work at all in terms of the culture," he says. "It also means you're purposely trying to be a second class citizen in that cultural scene.

"We may not be able to compete in terms of size, but we can go for that quality."

Monkey on Your Back (mobile) 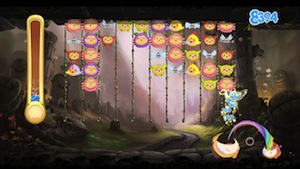 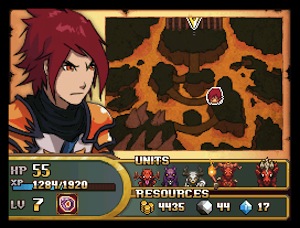 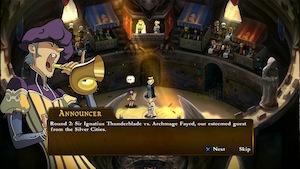 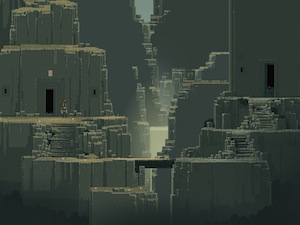 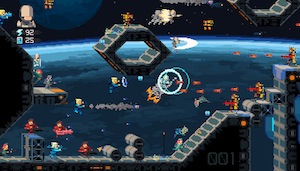 After years of being nobodies, Capybara Games suddenly has the eyes of everybody. Piotrowski recounts the feeling of accepting the XBLA award for Super TIME Force and joining Superbrothers on stage to collect Sword and Sworcery's award: "In a lot of ways, that night was a bit of a pinnacle moment," he says.

It was a pinnacle moment because it proved that everything they'd done had been worth it; everything from the hours they poured into puzzle games for brick phones to the risks they took to only work on games that made them feel like huge bubbles of excitement were swelling inside them – it was all worth it. They were given the opportunity to collaborate with Superbrothers – who laid the foundations for Sword and Sworcery to happen – and Jim Guthrie, whose music has inspired people all around the world. As they stood on stage, celebrating their collaboration, it dawned on Capy that they'd just been a part of something huge.

"I got really emotional about it," says Vella. "I was happy, but it really did feel like 'holy crap, all that stuff that came before it served a purpose.'

"We stuck to our guns. We believed that a bunch of nobodies from Toronto could make cool stuff, and you know what? We kinda did do that."