Papo & Yo wants you to be uncomfortable.

Minority Media set out to make something meaningful. Amidst a stream of games pilloried as bastions of sexism, violence, and machismo, Minority wanted to craft something culturally relevant ... but also something disturbing. It succeeds, but often not in the ways intended. In Papo & Yo, the narrative is supposed to be the uncomfortable part. Unfortunately, much of the gameplay left me feeling just as shaken.

Papo & Yo is as much a metaphor for studio founder Vander Caballero's troubled childhood as it is a proper game. Opening with a dedication to Caballero's mother and sister, who both endured "the monster in my father," it makes no effort to hide the metaphor or Caballero’s pain. Papo & Yo embraces both the power in a young boy's potential and the powerlessness in his horrified screams at the hands of the Monster.

Almost every task in Papo & Yo revolves around activating keys, switches, and levers drawn onto the fantasy world's walls, with very little to break up the repetition

Papo & Yo begins in medias res. Quico, the solitary, cowering child protagonist, hides from the sounds of an unseen father rampaging through their house. Ideograms glow on the wall opposite the boy, and when Quico examines them from the relative safety of the shadows, they transport him to a land of make-believe where the prospect of escape and empowerment beckon.

In this fantasy world, Quico has agency and doesn't need to cower. He solves environmental riddles that effect change on the world around him, though to what end is often unclear. Throughout his escapist adventures, Quico encounters a small range of puzzles that repeat over and over. Almost every task in Papo & Yo revolves around activating keys, switches, and levers drawn onto the fantasy world's walls, with very little to break up the repetition.

Papo & Yo's utilitarian, linear design rages against established platformer sensibilities. Initially, there are no cubbyholed secrets to find because progression through the world's walled garden serves only to feed the overarching narrative (though a second playthrough adds baubles to discover). The shantytown is not a sandbox but a means to an end — every interaction with the world exists only to unfurl Caballero's story.

The gameplay is simple to a fault. Quico enables his escape by interacting with a series of elements chalk-drawn onto the blocky environment. When Quico turns a key on the side of a small house, it grows cartoony legs and ambles across the screen like a possessed jack-in-the-box, conveniently coming to rest across a heretofore unbridgeable chasm. That wild sight delighted me the first time I saw it, but Papo & Yo's bag of tricks is limited. When every corner of the game is peppered with homes that can sprout legs, it stops feeling special. 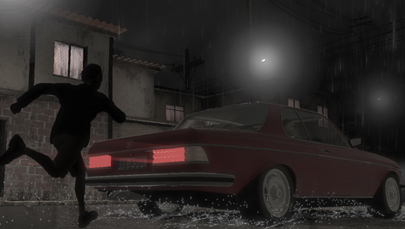 When every corner of the game is peppered with homes that can sprout legs, it stops feeling special 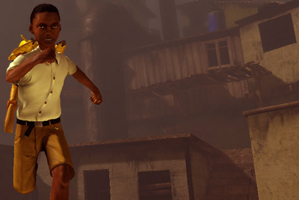 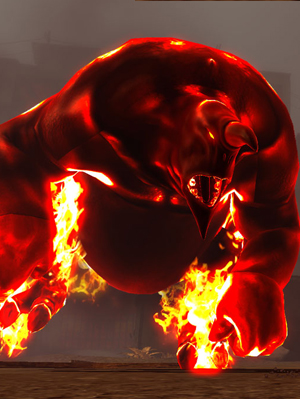 Papo & Yo toys with the idea of steady, Metroid-esque progression but never consistently. Quico gains abilities that allow him to solve increasingly complex puzzles, but those abilities are ripped from Quico's grasp without warning, and obvious solutions moments ago transform into new challenges. As in the real world, Quico is at the mercy of the tools at his disposal and the companions — good and bad — set along his path.

The addition of the lumbering, inadvertently helpful Monster doesn't serve to change the game's fundamentals. Even its storytelling is doled out in a near-rhythmless staccato that coalesces into a meaningful narrative too late in the journey.

Papo & Yo isn't without redemption. The ending sequence's interplay between story and gameplay works so well that I wished that Minority had incorporated the finale's twists and turns throughout the preceding three or four hours of gameplay. But Papo & Yo is also afflicted with bizarre bugginess that inhibits the very immersion that its heady metaphor strives to foster, trampling the gameplay in the process.

Players must battle the frame rate — which slows to a crawl every time Monster shows his grizzly side — obtrusive default camera angles in the most stressful parts of the game, and clipping so ubiquitous that it takes on a near-comic air. At one point, items I used to complete a puzzle evaporated. At another, Monster became trapped in the geometry. I encountered an infinitely reproducible bug in which Quico falls through the world and into oblivion, requiring not simply a hard restart but tedious backtracking. The consistency of the bugginess is jarring.

[Editor's note: A representative for Minority Media says that a day-one patch fixes the reproducible bug mentioned here, but we were not able to test it at the time of publication.]

The battered heart Papo & Yo wears on its sleeve invites players to share a journey made more of pain than polygons. The questions it raises about agency and ability are as heavy as the burden it places on Quico's shoulders. Papo & Yo's narrative ultimately succeeds thanks in large part to the finale's pitch-perfect crescendo. But the voyage fails in its most fundamental aspect — gameplay — and it is impossible to divorce the metaphor from the medium used to deliver it. No matter how well the ending pays off, it's not worth the investment you have to make to get there.

Polygon Reporter Dave Tach has spent the last week meticulously building legs onto his house and plans to see if they'll work this weekend. Find out what happens next by following him on Twitter.

Our review of Papo & Yo 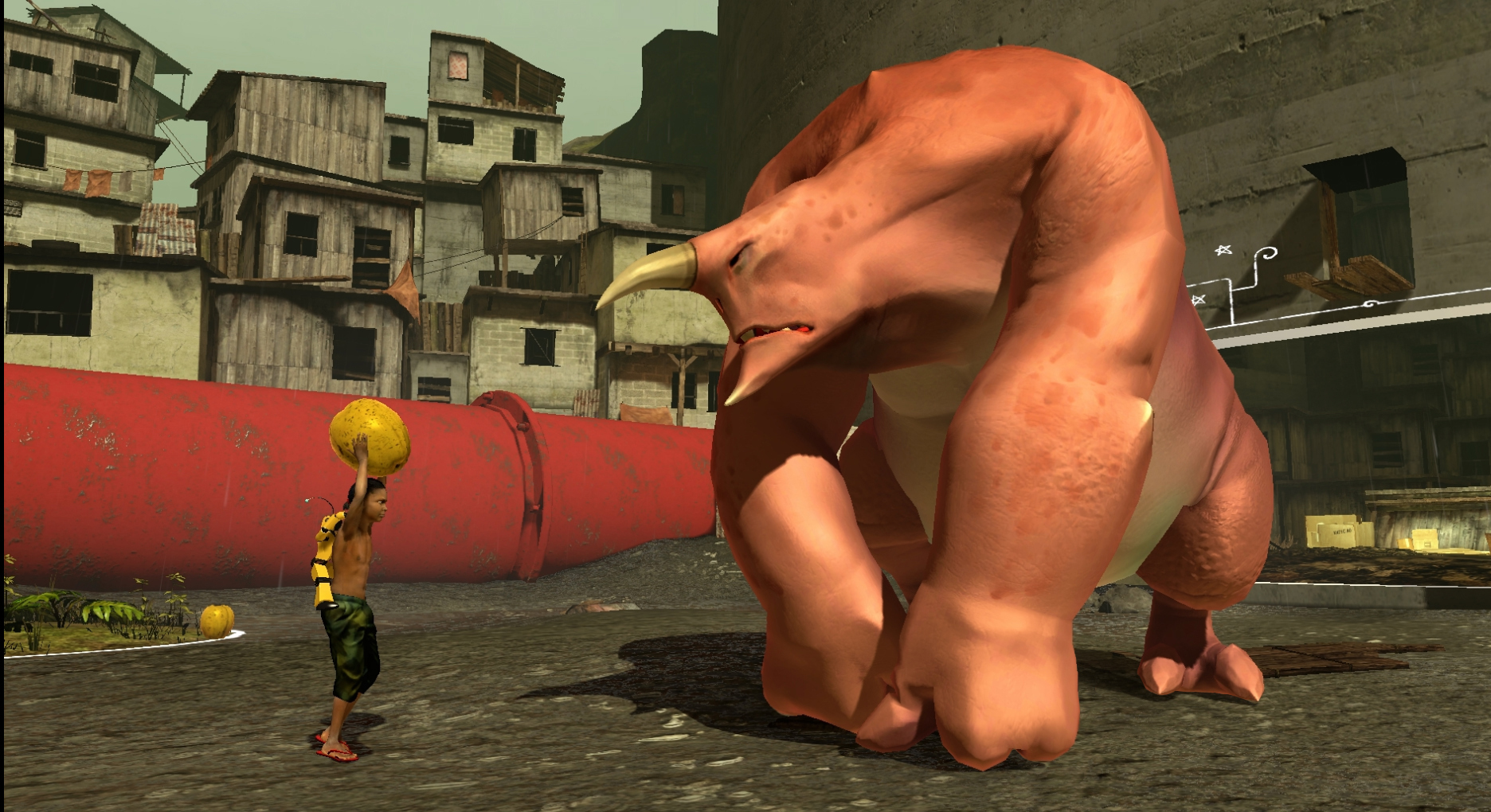 Papo & Yo's PlayStation 3 debut was held back by underlying tech problems; the recent Windows PC port has refined many of those issues out of existence.

The PS3 version often stuttered. NPCs would walk into walls and a repeatable, game-ending bug sent the protagonist tumbling through the geometry. Those rough technical edges sometimes made Papo & Yo a chore to play. All of these issues were nowhere to be found in my time with the PC version.

Papo & Yo has also received a significant graphical upgrade in this new release, delivering a more engrossing fantasy world. The game is also much better at playing by its own rules. Not having to worry about wonky mechanics made my latest playthrough far more enjoyable.

Minority Media's new version feels definitive, like a Director's Cut. Unfortunately, the game remains simplistic at its core, with puzzles that feel repetitive and offer little excitement until its wonderfully surrealist final act. Nevertheless, Papo & Yo on Windows is the best showing the game could give without a complete restructuring.

Our review of Papo & Yo