Diabolical Pitch demands a pitcher's precision, but Kinect isn't ready to come off the bench.

Pitching is the most difficult job in professional sports, period.

It requires a level of physical endurance that borders on inhuman, tasking athletes with tearing their arms off six days a week. Not only are there immense physical demands, but pitchers also have to consider infinite factors with each and every throw: Handedness, environmental factors, strategy — all while dealing with the fact that if their team loses, it's probably the pitcher's fault.

Diabolical Pitch skirts a lot of that pressure by equipping its protagonist, McAllister, with a cybernetic arm that pitches balls that don't obey the laws of inertia or gravity. Fatigue from overuse removes you from the action for seconds, not seasons. Diabolical Pitch gleefully ignores so many aspects of pitching, which is the kind of artistic revision the gaming community has come to expect from Grasshopper Manufacture.

In some ways, these revisions are stylish and entertaining — particularly the ones that turn McAllister's arm into a literal cannon. There is one difference, however, that wrecks Diabolical Pitch entirely: It demands a pitcher's precision, while the game's Kinect-enabled controls offer nothing of the sort. 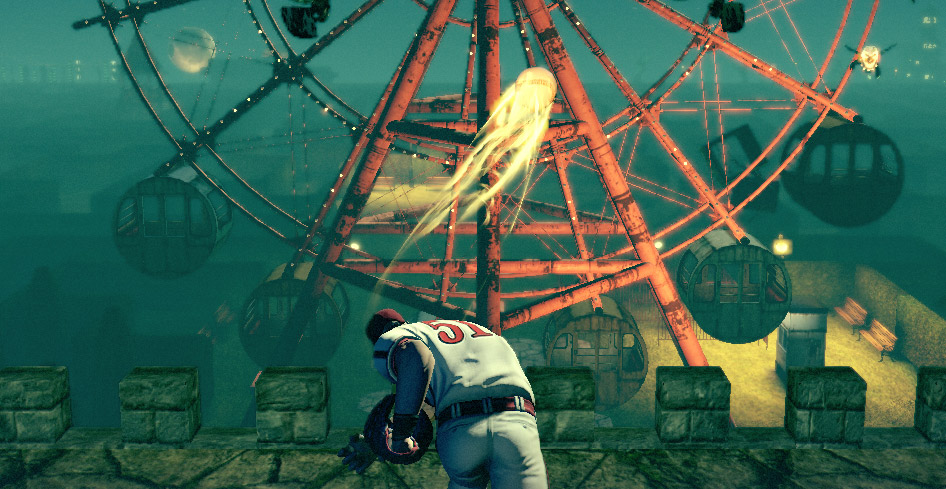 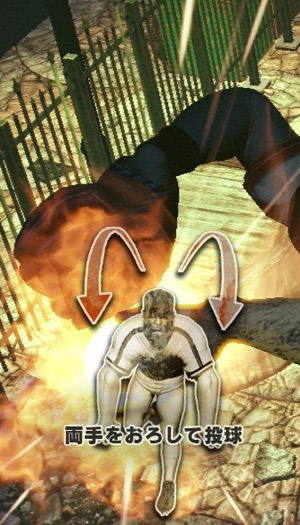 Players pitch with their dominant hand, firing fastballs at oncoming waves of killer dolls and assorted power-ups that appear on the field. With their off-hand, players can lock on to enemies to pitch a powerful headshot — a process that takes a little too long when the number of attacking enemies hits critical mass.

Diabolical Pitch can tell which general direction you're throwing a ball — left, right, or straight down the middle — but that does you little good when you're trying to pick off the closest of five enemies coming at one of your flanks. Sometimes, Diabolical Pitch doesn't seem to register your pitches at all, which is a major inconvenience when, say, a boss is charging at you, or when you're trying to perform a crucial quick-time event.

When the action is slow in the earlier stages of Diabolical Pitch, the imprecision isn't that noticeable. Even when you get swarmed, players can kick attacking foes away a limited number of times per level. In later areas, however, the player is actively working against the mechanism they've been afforded. You have to navigate a bullet-hellish number of obstacles using controls that don't work all the time. Perfection is totally out the window, and survival's not far behind.

As players dispatch foes, they'll charge up one of six "Diabolical Pitches"; stylish maneuvers which, if executed correctly, can take out an entire screen of enemies in one throw. They're entertaining across the board. Whether you're flipping through the air to hurl a Fire Pitch, or transforming your arm into a devastating cannon, the outlandishness of the attacks (and the gestures they require from the player) are delightful.

You'll need to save these powerful pitches up until a large group of enemies attacks. While you wait, however, the words "DIABOLICAL PITCH CHARGED" obfuscate the center of the screen, while a diagram showing the activation gesture takes up a generous portion of the left side. Oftentimes, I found myself using the power up just so I could see what I was throwing at.

You can unlock new Pitches and increase your statistics and score multipliers by purchasing baseball cards with coins earned during each level. Rewarding though this system may be, the clumsy, sluggish menus make perusing the catalogs of purchasable cards a chore. In fact, they make booting up Diabolical Pitch a miserable experience. After making it past the title screen, calibration, sign-in screen, hard drive selection, start menu, world selection, area selection and pitch selection, you'll probably be exhausted before you even start pitching.

Playing local multiplayer with a friend helps ease the pain of the game's faults, largely because two arm-cannons are better than one. The Suda51-flavored idiosyncrasies and outlandish (if not gimmicky) gestures are good for a lot of laughs. For instance, defeated players must drop to one knee and reach out a desperate hand to be revived by their teammate. 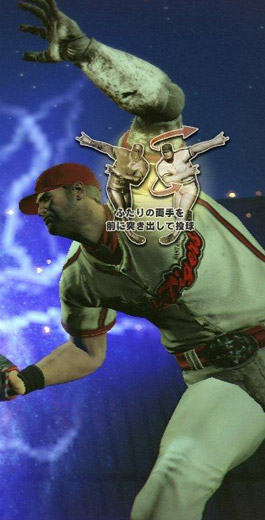 But theatrics are about the only thing Diabolical Pitch has going for it. It's a mechanically flawed game that takes two hours to beat — though it's going to feel like it takes much, much longer. Inspired though its stylistic inspirations may be, Diabolical Pitch feels like it was designed by someone who had never played a Kinect game before.