I checked the credits, and my Catholic grandmother had no involvement in I Am Alive.

This was a surprise, given how skillfully it made me feel ashamed and guilty about bad things I wasn't even aware I was doing.

Conceived in 2008 by Darkworks as a full-featured retail product, and completed in 2012 by Ubisoft Shanghai as a downloadable title, I Am Alive is technically unstable and narratively disjointed. It feels like a game that had a troubled four-year-development across two studios on opposite ends of the Earth.

Our handsomely rugged 30-something protagonist Adam hopes to find his wife and daughter in the city of Haventon, which, nearly a year ago, was devastated by earthquakes and poisonous ash. A lost young girl named Mae, who reminds Adam of his own daughter, sidetracks this quest before the introduction is complete. Mae's mother Linda is somewhere in the city, and Adam takes it upon himself to find her, secure her safety, salvage a distress beacon, pick up her laundry, make her bed, and cook amuse-bouche before being on his way to find what's-her-name and who's-her-face. Which involves a lot of climbing things before Adam exhausts himself and falls to his death. 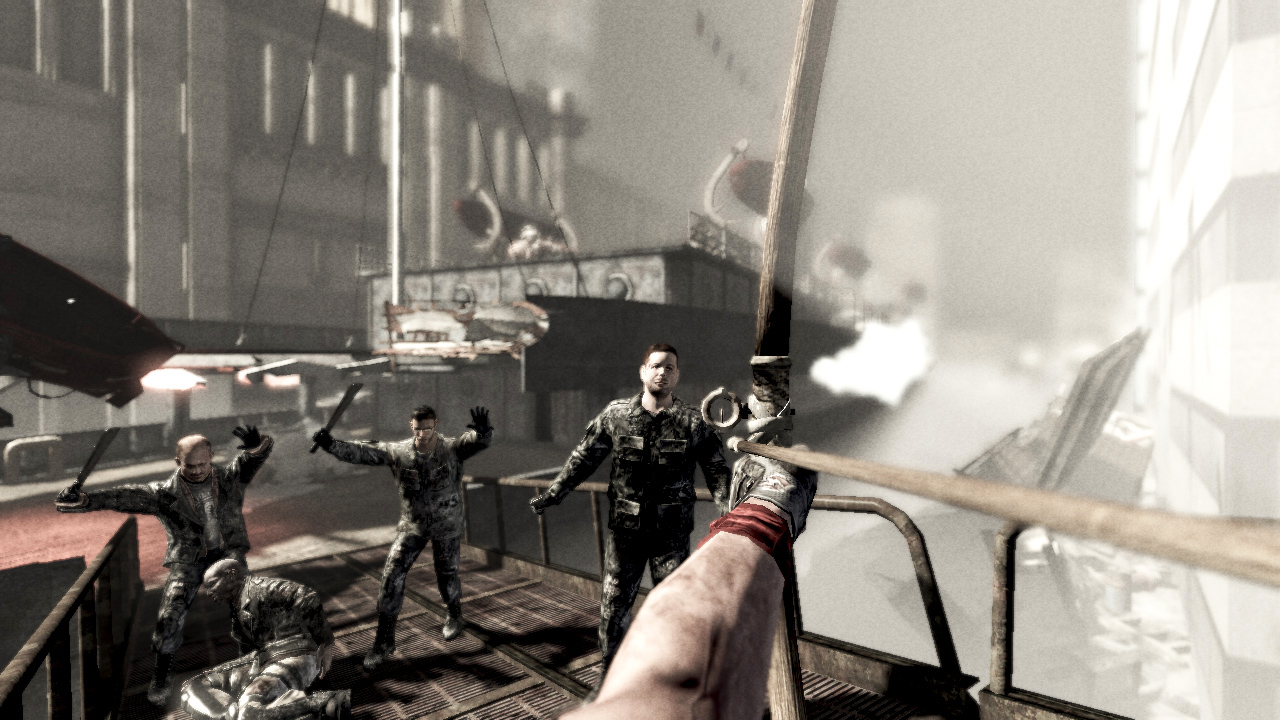 I Am Alive shares a publisher with Assassin's Creed, so it's surprising how flawed the climbing is. The notion that Adam can only climb so high for so long before he runs out of stamina is novel and grounds I Am Alive in reality. That reality is immediately shattered after average Adam has killed dozens of people and climbed multiple skyscrapers in a cancerous death fog.

The climbing, which requires precise steering at a fast pace, is unreliable. Long climbs (helped by bolts that allow for rest mid-ascent, a good time to wipe nervous condensation off the controller) sometimes ended in death because the game mistook a long jump command for a short jump. But the game makes believers out of its most cynical players: you will pray for Adam's slippery hands to make that last grab 40 floors above street level. The reason? Death in I Am Alive sucks.

Adam starts with three retries, which bounce him back to a checkpoint. No more retries, and Adam must restart from the save section. Having trouble completing a save section? Restart the episode. Where episodes, save sections and checkpoints in I Am Alive begin and end is unclear. And having to think so much about all three is another strike against the game's emphasis on real world decision-making. A tough choice is sapped of drama the third time it's made.

Then there are guns, and they are useful, actually, when not being fired. In conflict, Adam raises his weapon. Sometimes enemies surrender. Most of the time they gingerly raise their hands in half defeat. On a few occasions, they'll charge Adam, knowing he likely lacks any ammo. It's a welcome addition to video games, where people hurry into gun fights the way sane people hurry onto a bus.

Unfortunately, the system never amounts to more than a handful of repeated showdowns. 75% of the time, three men approach Adam. The first man is killed with a surprise throat-slit maneuver. The second shot. The third, left to plea for his life, is stabbed via a lengthy quick-time event. Mix-up the order, and Adam's injured, killed, or out of ammo. In short, prepare to slit lots of throats. 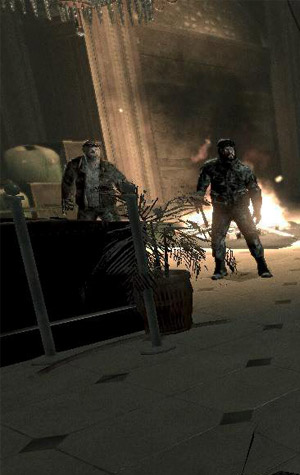 prepare to slit lots of throats

You can also kick men off buildings or into fires, but this flourish typically leaves Adam prone to attack, resulting in death. It also doesn't gel with the nice guy image the narrative tries to paint. That doesn't mean you shouldn't do it every chance you get. I Am Alive really milks these deaths. Every person dies one of those comically gurgly, beg for mercy Monty Python deaths. Their emotional trajectory tracks from disturbing, to comical to "enough already I'll shoot you in the face with a bow and arrow and get this audio cue over with."

Occasionally combat can be avoided. These moments usually involve an old man or a woman who's protecting some can of junk food. There's no evident moral punishment for doing so, beyond one's personal boundaries and love for junk food.

Far less ambitious than the combat and climbing is the game's look. It's tough to parse I Am Alive's art design from its disappearing architecture and public bathroom color palette. The story conveniently explains away many of these graphical shortcomings. After "the event," a dense fog rolled in to conceal many buildings more than 30 feet from one's face. A thin layer of ash covers much of the outdoor map. Instead of interesting textures, streets, cars and bus stops are bleached a grimy off-white.

Uncovering the atrocities of the off-whitest town on Earth is unsettling, not just because looking at human bondage and sex slavery upsets decent human beings, but because the game forces the player to become an actively unlikable participant. And worse, it makes you hate the people who most need help.

A survivor asked me for rat meat. I only had fine wine and fruit cocktail. I demand rat meat, said the survivor. So, being practical, not wanting to start a fight, I walked away, hearing him wretch in agony. Why must I forsake him of the rat meat he deserves? Later, I returned to the survivor, and would you believe he hung himself over rat meat. I had wine, you fool! And fruit cocktail!

There's ham-fisted dramatic irony. After climbing and failing and climbing and falling up and down a skyscraper, I reached an upper floor with two men and a woman discussing baseball. They came at me, and I shot them in the face with a bow and arrow. The next floor, I met two kids (and bumped against their tomatoes, unintentionally adding what was probably their only food to my inventory). "That's a big bow," said the boy. "What do you hunt with it?" That line was subtle. The next line, delivered by the girl was not. "Have you seen our parents? They're one floor down from there?"

Yes, I saw them, and they got arrowed and I am so sorry and I really wish I hadn't taken those tomatoes, because you look awfully hungry, but I just can't get them out of my inventory. But I do have wine and fruit cocktail. 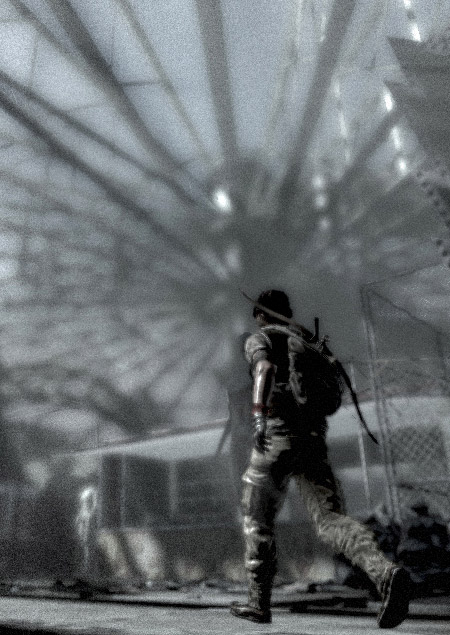 I KILLED DOZENS OF PEOPLE, STOLE FOODSTUFFS FROM THE ELDERLY, AND DROVE A MAN TO SUICIDE FOR THREE STRANGERS AND A CAN OF FRUIT COCKTAIL

After completing the game, a screen appears to grade your performance. I received a 75%, because I stole from children (it wasn't clear whether murdering their parents was factored in) and also because I was a cannibal. I can't say when I consumed human flesh, nor do I believe it was called human flesh when I did so. Ah well. One final tinge of guilt for an awful, disgusting, unsettling thing I never wanted to do. That sums up I Am Alive concisely.

I killed dozens of people, stole countless foodstuffs from the young and the elderly, consumed human flesh, and drove a man to suicide. For what? Three strangers and a can of fruit cocktail.

I Am Alive was reviewed using code provided by Ubisoft. You can read more about Polygon's ethics policy here.