The puzzle-platformer has many iOS attributes: Escape Plan is cheaper than other Vita titles. It's downloadable only — you won't find a boxed copy in stores. And it makes clever use of the glossy touch screen — along with the rear touch panel and interior gyroscope.

Unlike most iOS titles, however, Escape Plan is also stupendously beautiful; with its monochrome art design and quirky classical sound track. At first blush, it looks to surpass its casual mobile gaming competition.

The premise is precious. Lil and Laarg, respectively skinny and fat goo creatures, or as I will call them, "goomans," must be guided via swipes and prods through the Escape Plan's treacherous laboratory. It has architecture that only a mad scientist would design — more hanging blades and spike pits than stairwells and doorways.

The goal is to help the goomans escape, though they (and you) have no plan other than to progress forward. Room after room after room after room. The laboratory is broken into dozens of these chambers that act as standalone levels. Each requires the player to solve a small puzzle, like tap a brick out of the way of Lil, or steer Laarg through a corridor filled with lethal gas.

The puzzle-platformer label, though, is a misnomer, because none of the puzzles are puzzling. Escape Plan is just a platformer, a difficult one at that, requiring finger-mashing commands, deployed with kneejerk reflexes. The most difficult stages require tapping the rear panel, swiping the front panel, and tilting the system, while steering the camera with the right joystick. Eventually, one stops learning how to play Escape Plan, and starts learning the many unusual ways to hold the PlayStation Vita. 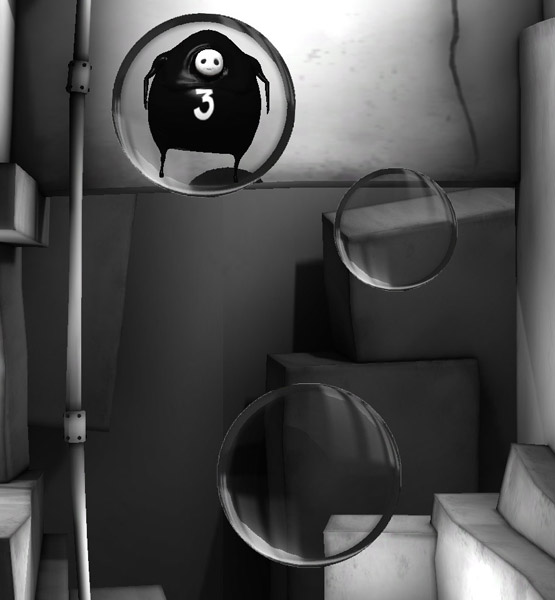 All of this manic futzing tends to cause the unintended death of those adorable goomans. Which is as maddening to experience, as it is morbidly adorable to watch. (They burst into icky black inkblots in the cutest ways!) The humor does its best to curb the frustration, though ultimately loses out. 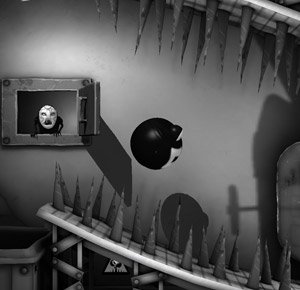 In great puzzle games, once a solution has been gleaned the puzzle becomes simple to solve. But Escape Plan doesn't just want smarts, in some stages it wants skill, luck, and inhuman wrist flexibility.

Some early stages are hair-grippingly difficult. Some latter stages are as simple as tapping the goomans in the right direction. Those are the best ones. Exploring the world with taps and swipes is stupefyingly pleasurable. Everything reacts with either a sound or a movement, which blends with the macabre children's cartoon vibe.

Each stage rewards up to three stars. Fewer taps and a faster completion time net all three. Having fun, that is tapping everything in sight, generally merits only a single star. This reward system discourages exploration and experimentation in a game that seems to be all about those things. As a new game plus mode, the star system would have added a layer of challenge, but coming up short after initially completing each stage is a drag.

ESCAPE PLAN MAY BE MORE BEAUTIFUL THAN THE IPHONE COMPETITION, BUT IT STUMBLES BEFORE THE FINISH LINE

Escape Plan's format — short stages, cute design, and a three star system — purposefully draws comparisons to the iPhone competition. It is, without question, more beautiful than Angry Birds and Cut the Rope and their knockoffs. But it fails to compare when it comes to the actual playing of the game. The touch controls are too unreliable, the camera too cumbersome. And frankly, the price is too steep, when you're considering the wealth of content its contemporaries provide. Escape Plan gets off to a good start, but stumbles before reaching the finish line.