"The audience is maturing and we as developers, we have to respect the people who consume the content." - Mark Thompson

Walking along a road paved with flickering, static-filled television screens adrift in inky blackness, Jason Brody sees himself posed to the left of his path, another him standing at attention, gun to his own head. A few steps deeper into the darkness Brody sees homicidal fanatic Vaas. Vaas circles a steel pole jutting from a splash of flickering screens angled away from the walkway. Twirling around the pole slowly, Vaas shifts imperceptibly between himself and his sister. As Jason continues to walk, he comes to the end of the path and meets Vaas again and, gun in hand, prepares to kill him, until the head he's pressing the weapon against becomes his own.

The developers of Far Cry 3 call these unsettling, paradoxical moments in their game hallucinations. That makes sense; they're surreal moments that seem to tear away not just from the reality of the game, but from reality as a whole. Hallucinations in a game that features, at least to some degree, hallucinogenic mushrooms seems fitting.

But the thing is, those unreal moments aren't always caused by a drug.

"Sometimes it's basically Jason's psyche starting to break down a little bit," Mark Thompson, the game's level design director tells Polygon. "The walls between reality and his mind start to crumble a little bit.

"It's kind of in reaction to what he's doing, he's becoming a killer and has this blood on his hands. And sometimes his subconscious sort of raises up and goes ‘Hey Jason, what's going on here? What are you doing? What are you becoming?' So we have these kind of introspective sequences."

As the person controlling Jason, making him do all of those terrible things to survive an even more terrible place, you don't really ever know why he sometimes drifts away. It could be the drugs. It could be Jason's mind.

"The message we communicate in these sequences, we always, we leave it open," Thompson said. "We don't want to give people the answer. We let them figure it out. It comes back to having respect for the audience. We don't want to just tell them on the nose what's happening in the story. We want to give them some pieces of the puzzle and we want to let them put it together and really give them a chance to make their own interpretations."

That approach to Jason's mental state in Far Cry 3 is the clearest sign of Ubisoft Montreal's take on a medium that they see evolving past what Thompson calls "little boy fantasies" and moving on to more complex, nuanced content.

Fans of Far Cry are used to it: The fact that this series of games, a series now on its third iteration, is never really linked to one another. But those new to the games, perhaps drawn to the interesting settings, open world or strange stories, may be surprised to hear that.

"Far Cry isn't about a specific narrative or character, it's more of the idea of a location that's at the edge of civilization, that doesn't really have rules," he said. "There never is a sense of something being right or wrong or someone being a good guy or a bad guy. There is always a moral gray space in between." 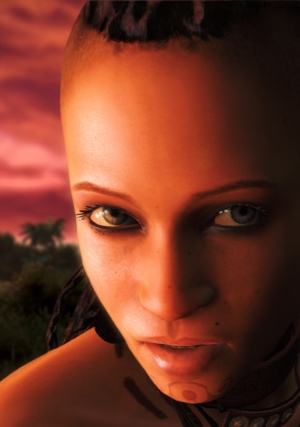 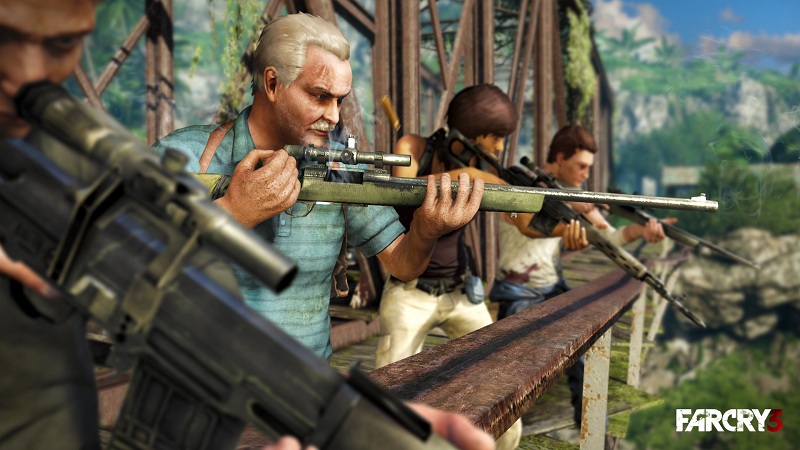 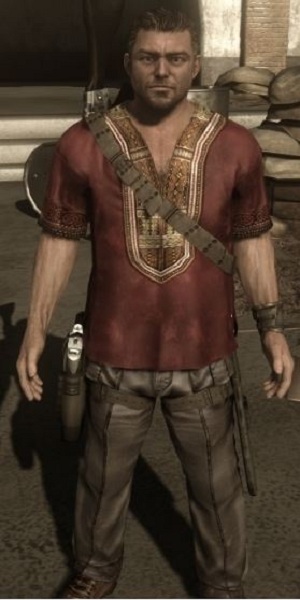 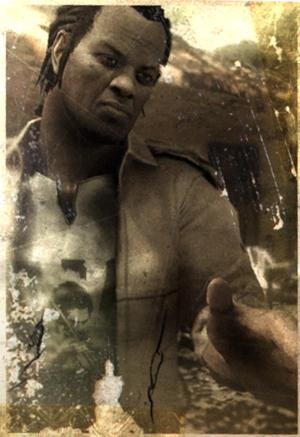 In Far Cry 2, Thompson points out, even those players who finished the game are likely to disagree about who was the hero and who was the villain.

And with each new game, the developers push that idea further.

In Far Cry 3, players take on the role of Jason Brody, a guy on a vacation adventure with a bunch of friends. Out of his element, he's too busy partying in places like Bangkok, Thailand to notice the dangers he and his friends are drifting further and further into.

Finally, when things go wrong on some unknown island in the middle of nowhere, it's up to Jason to become the hero. That's not because he's particularly adept at saving people, or surviving, it's simply because he's the one who happened to get away.

"In order to get his friends back, Jason has to do some things that some people would look at say, ‘Is he a bad guy?,'" Thompson said. "He's not being a bad guy. He's just doing the things he needs to do to survive and rescue his friends.

"It's not about right and wrong or good and bad," he said. "That's why the Far Cry games don't have morality systems, there isn't this rigid dichotomy of good and bad in the world, so why reflect that in the game?"

It's important for Thompson and the developers at Ubisoft Montreal that the game doesn't condescend to players. Not the way many other games sometimes do. Not the way television and movies sometimes do. It's an interesting distinction Thompson is making when he explains what he means by that.

He knows, the development team knows, that ultimately they are making a game about killing people and rewarding players for killing people. Killing lots and lots and lots of people. More people than any television show or movie you are likely to ever watch. But they also want to tell a story, a story that doesn't ignore that, or really embrace it.

So when I question the game's ability to tell a story about a man becoming a hero, when that man is destined to slaughter so many, Thompson doesn't shy away from the answer.

"We don't say whether something is good or bad. We don't judge players. Ultimately the game is about killing, and we know that, so we don't want to condescend," Thompson said. "The game asks you to shoot. The game is about killing people to win. So we wanted to make sure we wrote a story that understood that. The story is about killing, the story is about Jason ... Jason comes to the island and he's never fired a gun before, he's never killed before. So the story really explores what it means to become, the things he has to do to become a hero.

"The game is about what is the cost of becoming a hero. What is the personal toll that is exacted upon someone who becomes a hero."

Does Thompson worry when he sees gamers questioning the many people thatUncharted 3's Nathan Drake kills in that game?

No, but he says he has a lot of respect for gamers who start to ask those questions

"For sure we'll still have the summer blockbusters, but there is a space for a more nuanced narrative, something that isn't afraid to tackle issues that video games haven't been tackling because they've been focusing on power fantasies and fantasies about being the ultimate soldier."

Thompson points to Die Hard. A great movie, he says, but why didn't they ever show the audience the impact of John McClane's relatively few killings.

"We never see the scenes six months after the event when [McClane] wakes up in the middle of the night in a cold sweat seeing Hans Gruber falling from Nakatomi Plaza."

What about Jason then and all of those people he is destined to kill? Thompson said we will see the changes in Jason's character in many ways, but none of them will be straightforward. We will see them in the way his friends look at him when he finally rescues them. And we will see those changes in the metal fractures, the breaks from sanity caused by Jason's growing post traumatic stress disorder. 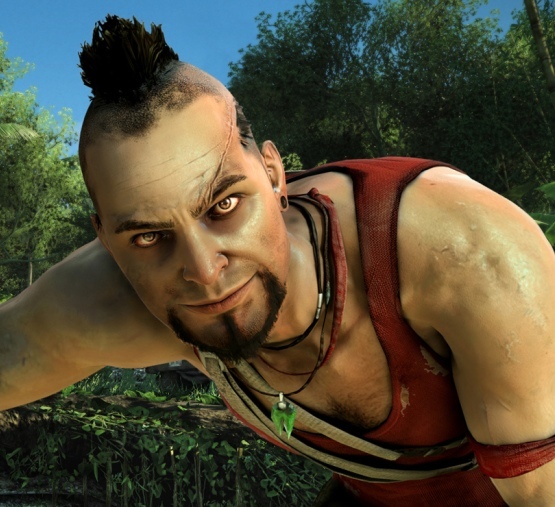 Post traumatic stress disorder "is an important part of what Jason goes through on the island," he said. "We want to address all of the issues that would happen to a normal person who is put through this kind of situation."

What then of Jason's six months later? Will the game then revisit the psyche of a character on the other side of a video game, in his long nights of cold sweats? Thompson doesn't really say. After all, the ending of an unreleased game is sacrosanct. Instead he tells me that it's at the top of their mind, that they developed Far Cry 3 with the idea of constantly toying with people's expectations and challenging assumptions.

Far Cry 3's developers seem to understand that the complexities of gamer tastes continue to change.

"I think games are evolving out of little boy fantasies," Thompson said. "We're moving on to something else. You know, narratives that are a little bit more sophisticated ... it's something that other mediums have been doing for a long, long time." 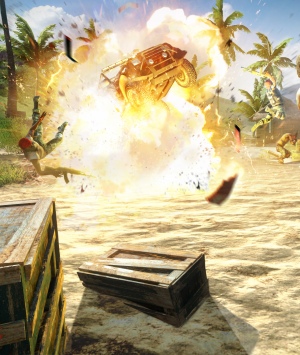 "GAMES ARE EVOLVING OUT OF LITTLE BOY FANTASIES."